Just before Christmas we ran across this ABC News travel article, titled Frequent Flier VIP: Meet the Guy Who Never Waits at the Airport - Secret Frequent Flier Clubs Aren't Just for George Clooney and His New Movie, 'Up in the Air.'

It's an interview with Tom Stuker, a Global Services member of the United Airlines Mileage Plus Program who flies about 700,000 miles annually and has racked up nearly 8.8 million lifetime flying miles with them. As the article makes clear, UA and other major airlines maintain somewhat secretive invitation-only VIP programs to treat their highest spenders like royalty - UA's is Global Services or GS. Kathy and Brian, although UA 1Ks, definitely do not fall into that category, but enjoy reading about it.

We posted it on FlyerTalk here under our FT nom-de-cyber Fredd. Lo and behold, partway through the thread Tom Stuker himself weighed in, his FT handle being ua1flyer. In Post #71, he patiently explains to some incredulous FTers how he manages to fly so much more than they do:

About the miles. This year I will have flown just a little less than 700k, and yes that is BIS. With all this DEQM, my Total EQM will end up just shy of 1.5 million. As far as what I do, Ido sales and managment training. Where cars are sold is where I have the ability to work. Ifell in love with Australia and it's people about 25+ years ago and have trained there regularly since. I also vacation quite regularly. The woman I am involved with and I have taken at least 50 honeymoons in places all over the world. Life is to short. A while back I decide to work to live and not live to work. As I have mentioned previously, I have 2 sons, one in high school and the other works and travels with me a lot. He will become a million miler next month. P.S. I don't know who YOU work for , but if you work in the Auto industry, maybe you could use my help.

In the midst of this, Tom was also interviewed on Fox and Friends. United Airlines has to be happy with all of the favorable publicity Tom has generated for them, especially considering that the hero of the movie flies with American Airlines.

It was informative and fun to make contact with UA's highest flyer through FT. Maybe it also makes our 140,000 or so flying miles this year seem a little less eccentric. Maybe...

Incidentally, the director of Up in The Air, Jason Reitman, was interviewed on Oprah's website. He mentions FlyerTalk early on. You can find the interview here.

October 30 2011 Update: We finally get to really meet Tom Stuker in person.
Posted by Kathy and Brian at 6:14 AM 1 comments

First, let's get the confession off our chests. We overdid it, at least by our own standards. We'd planned two transatlantic cruises, one spring and one fall, allowing us to buy round-trip air tickets and take advantage of the attractive pricing of a repositioning cruise. As we were concluding our March transatlantic on Oceania's Regatta, the price they were offering for a Baltic cruise was fairly amazing, so after thinking seriously we jumped at it.

We shared some thoughts about our cruising experiences back in August.

Our favorite cruise line? Still Oceania but we haven't found a cruise line yet that we wouldn't return to, if the price were right.

Our favorite cruise? Still the transatlantic. We love sea days and prefer them to the more crowded ports.

We're not heavy-duty cruisers. No, really! There are folks who practically live on ships. Still, it's hard to turn down a bargain.
Posted by Kathy and Brian at 4:42 PM 0 comments

2009 has been another great travel year for us with cruises, including a Baltic Cruise that took us to some places we might not have found on our own, and a variety of other trips to Thailand, Europe, Hawaii, New Zealand, Australia, London, and of course Alabama.

United has already sent us our 1K cards for 2010, indicating that we've flown at least 100K, that is 100,000 miles. Our actual BIS (butt-in-seat) miles total up to 139,931, but with a couple of crazy DEQM (Double Elite Qualifying Miles) promotions that United has run to stay competitive with other airlines, the EQM (Elite Qualifying Miles) totals in displayed our mileage accounts are over 225,000 miles.

Our lifetime flight miles on United are closing in on 800,000 miles. If we keep flying until we reach the million miles mark, we'll have a few ongoing perks from UA, even if we cut down our flying.

In January we're planning our fourth trip to Singapore, where we plan to meet up with some other FlyerTalk members for the SIN Do.

After three weeks in Alabama playing with Riley and meeting Blane, it's good to have a little time to catch up on things around the house.
Posted by Kathy and Brian at 8:36 PM 0 comments

So here we are back home again in Birch Bay Village after three weeks in Alabama. Our sleep in the BHM Holiday Inn was very poor, no fault of theirs. It's just that planning to catch a 6:00 a.m. flight makes us a little jumpy.

We flew up to ORD (Chicago) on a regional jet, then transferred to a 757 for a First Class flight to Seattle.

David picked us up with three little girls who seemed happy to see us. After a pleasant 24 hours or so, we hit the road this afternoon, drove through ever-lowering temperatures until it hit 29 degrees in Blaine, where we picked up our mail before stopping at the market to buy some staples before returning to home sweet home.
Posted by Kathy and Brian at 7:41 PM 0 comments

Having A Ball With Riley

Little brother Blane has come home now, but we've had a lot of fun reading books, watching videos, and especially playing ball with Riley, a southpaw with a wicked arm.

Posted by Kathy and Brian at 1:59 PM 0 comments

Two of our greatest joys in life are our grandkids and, of course, travel. The opportunity to travel to visit grandkids and, most recently, to welcome our seventh grandchild is something incredibly special.

So we offer a very special welcome to Blane Hildenbrand, born December 7 at 11:25 a.m. in the Shelby Baptist Medical Center, Alabaster Alabama. Blane weighed 7 lb. 9 oz. and measured 20 inches. He and his mommy and daddy hope to come home Wednesday. Blane's big sister, Riley, has been very helpful and picked out some flowers for Mommy and a stuffed animal for Blane that she'll deliver later today to this bright-eyed little guy. 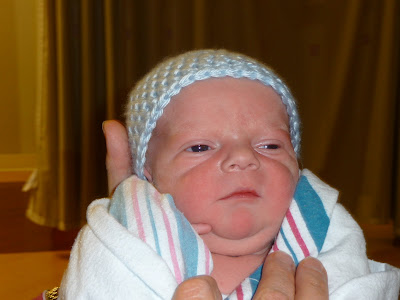 Riley has already spent quite a bit of time holding Blane and getting to know him. 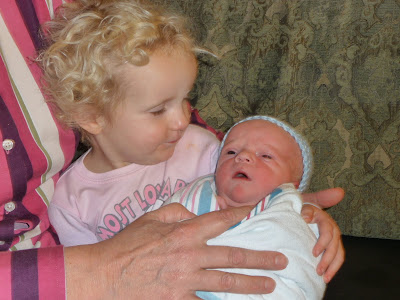 Riley's spent a lot of time up in Mommy's bed too. It's fun to kiss Blane but even more fun to get a hug from Mommy. 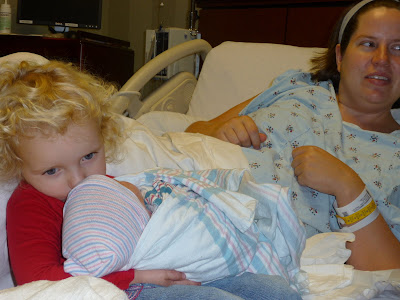 Grandma and Grandpa have been getting a turn too. There's nothing better. 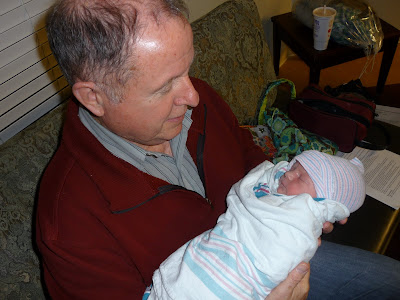 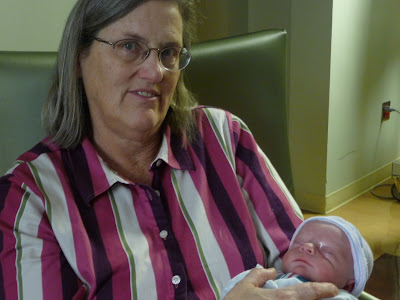 Posted by Kathy and Brian at 1:00 PM 4 comments

It was a chilly morning in the Birmingham area December 5. We all dressed warmly and headed over from Helena to nearby Alabaster for the Christmas Parade. The theme is apparently "Christmas Is The Giving Season" and there was a lot of giving going on at the parade. Candy, pounds and pounds of candy... Kathy and Brian have been involved in a few dozen parades during our band days, from Santa Barbara's Old Spanish Days Fiesta Parade (Brian was a member of a youth band sponsored by a music store) to the Hollywood Lane Christmas Parade (Brian was drum major of the San Marcos HS Band from Santa Barbara) to the Portland Rose Festival Parade (Kathy was a member of the Durango HS Band) to the Hope BC Brigade Days Parade. Never in all those parades have we seen so much candy handed over and thrown out. Granddaughter Riley must have collected well over a pound during the two-hour event.

Here she is awaiting the start of the parade, not knowing quite what to expect. 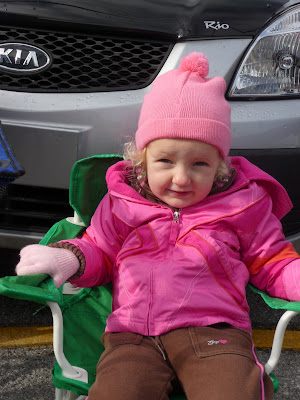 Of course, she has no recent memory of parades so doesn't know why Mommy brought a bag along, but she soon caught on. 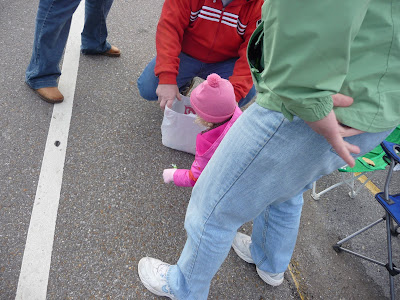 Most of the half dozen politicans in the parade, running for everything up to and including Lieutenant Governor, were throwing candy as well. What a metaphor! So did local businesses, churches, and community organizations such as the Shriners.

Near the front of the parade was the Thompson High School "Marching Southern Sounds" Band. The band, color guard, and dance team / drill team took up most of the length of a city block. They must put on quite a halftime show at home football games. We're surprised that some of those girls weren't covered with goose bumps, but then we were too polite to peer closely. 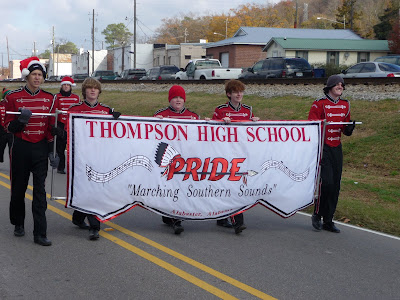 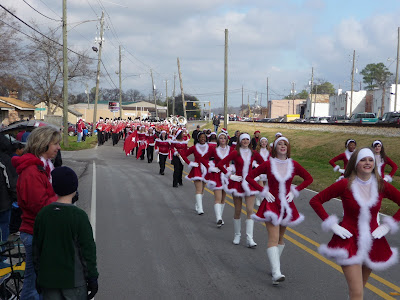 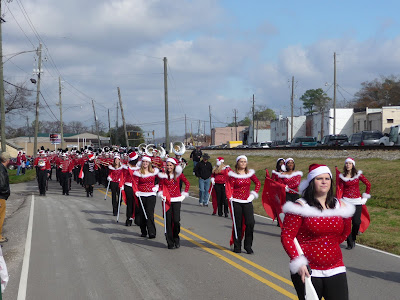 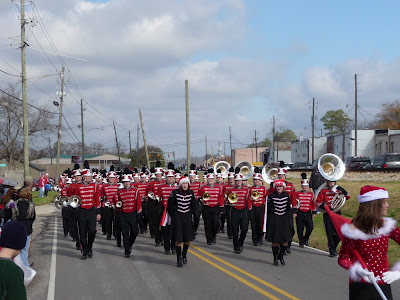 The windchill factor blew the temperature down near freezing, and it was fortunate we had a car to retreat to during the frequent gaps in the parade. Still, it was worth waiting for the cacophony of sirens wailing from an assortment of ambulances and fire trucks that announced both the end of the parade and the arrival of Santa. 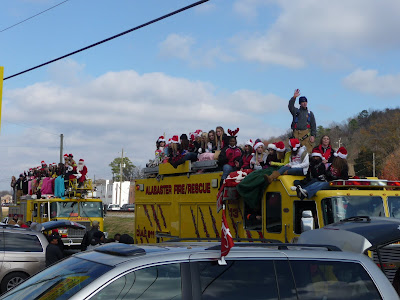 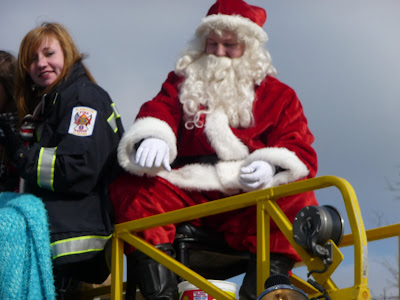 We know one Mommy whose Christmas wish is that her new baby arrive well before the Rose Bowl Parade.
Posted by Kathy and Brian at 12:55 PM 0 comments