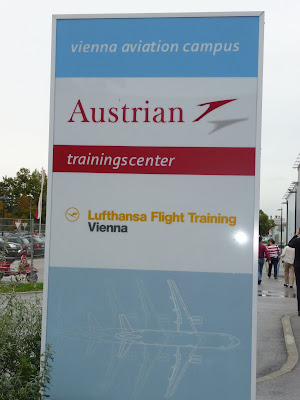 Our Friday at VIE - Vienna Airport - started at 8:45 a.m. and didn't end until after 5:00 p.m. It was easily one of the most fascinating days we've ever enjoyed at any kind of "facility." What a hands-on (or at some points butts-on) experience it was. 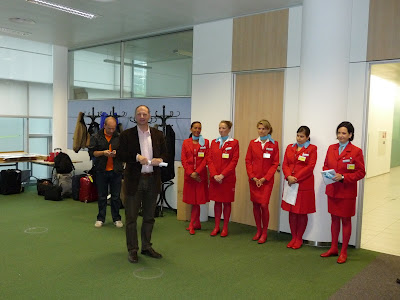 We have many photos to post here, including our simulated emergency evaluations from Austrian's Boeing 737 and 767 on slides, and we'll add a few at a time.

If you weren't wearing jeans, the best all-cotton garb to avoid friction and burns if you're about to slide down a slide (and a great reason to dress casually when flying), the first step was to change into OS overalls, very fetching. 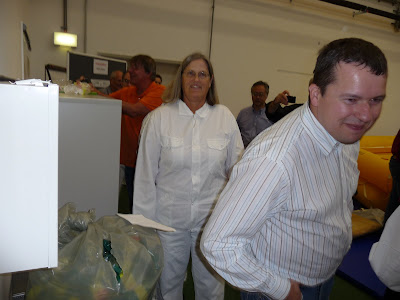 The importance of no friction became apparent once we were seated in the 737 mock-up when the chief flight attendant teacher suddenly started to scream at us to evacuate, leading us to assume the I-Dream-Of-Jeannie arm position and slide. 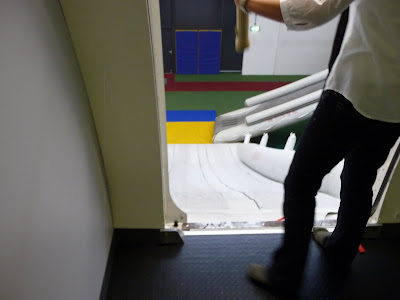 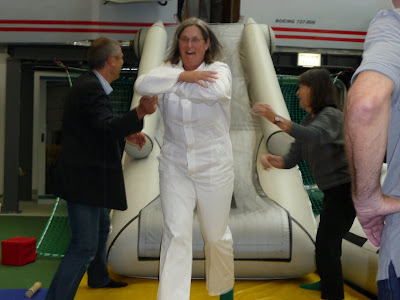 Most of us tried the over-the-wing emergency exits - in real life you slide steeply down the flaps (if we're using the correct term). 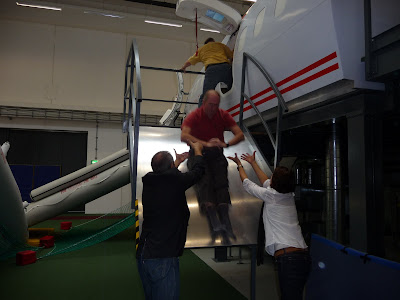 Then it was onward and literally upward on the exceedingly steep stairs to the 767 cabin mock-up, the largest plane currently in the OS fleet. From that vantage point there's nowhere to go but down. It's lucky for us we've experienced those inflatable jump-gyms a couple of times at grandkids' birthday parties. It's essentially the same concept. 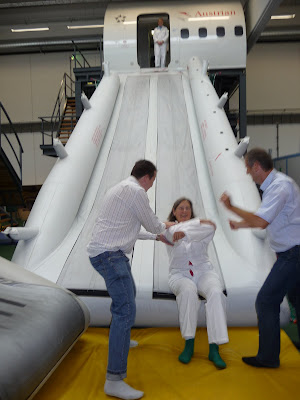 We all were able to heft an emergency-exit once our Flyer Talk friend Bo, sitting in the row behind us, removed it. We're sure in a real-life situation that he'd drop his camera while removing the exit. 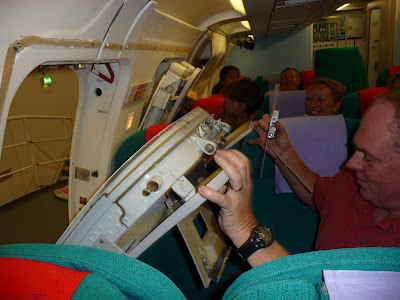 We also "rode" inside the flight simulator OS uses to train flight attendants. We experienced "mild" to "moderate" chop (turbulence) before making yet another emergency exit, for a total of five emergency exits during the session.

We learned that, in an actual emergency, about 70% of passengers just sit passively awaiting instruction, 15% are natural leaders, and 15% get in the way. People instinctively attempt the same actions as if they were making a normal exit, retrieving carry-on and exiting through the same door they entered. Some people forget how to remove their seat belts.

Think of that the next time the flight attendants offer those "boring" safety announcements - we certainly will.
Posted by Kathy and Brian at 12:35 AM

Wow! Talk about an amazing experience! Love reading about it and love the pics.