We’re bound for a Caribbean cruise out of Miami, and so far it’s been an easier trip than our recent chaotic pre-Christmas flights home.
We belatedly realized we had an expiring free night stay on our IHG credit card, and applied it to the BLI Holiday Inn for the night we return at midnight.
We added $70 for two weeks of underground parking, and have an unbeatable park-and-fly rate.
After the weather woes of last week, we decided to bump up our BLI-SEA leg to one day earlier, and to overnight in Seattle. That precaution was not needed, but we enjoyed a pleasant and cheap New Year’s Eve stay at the SEA Hilton Garden Inn, just around the corner from the Doubletree. As a bonus, we no longer had to catch a 5 am BLI-SEA flight.
New Year’s morning still dawned early for us as we boarded our 7:35 am SEA-MIA flight. 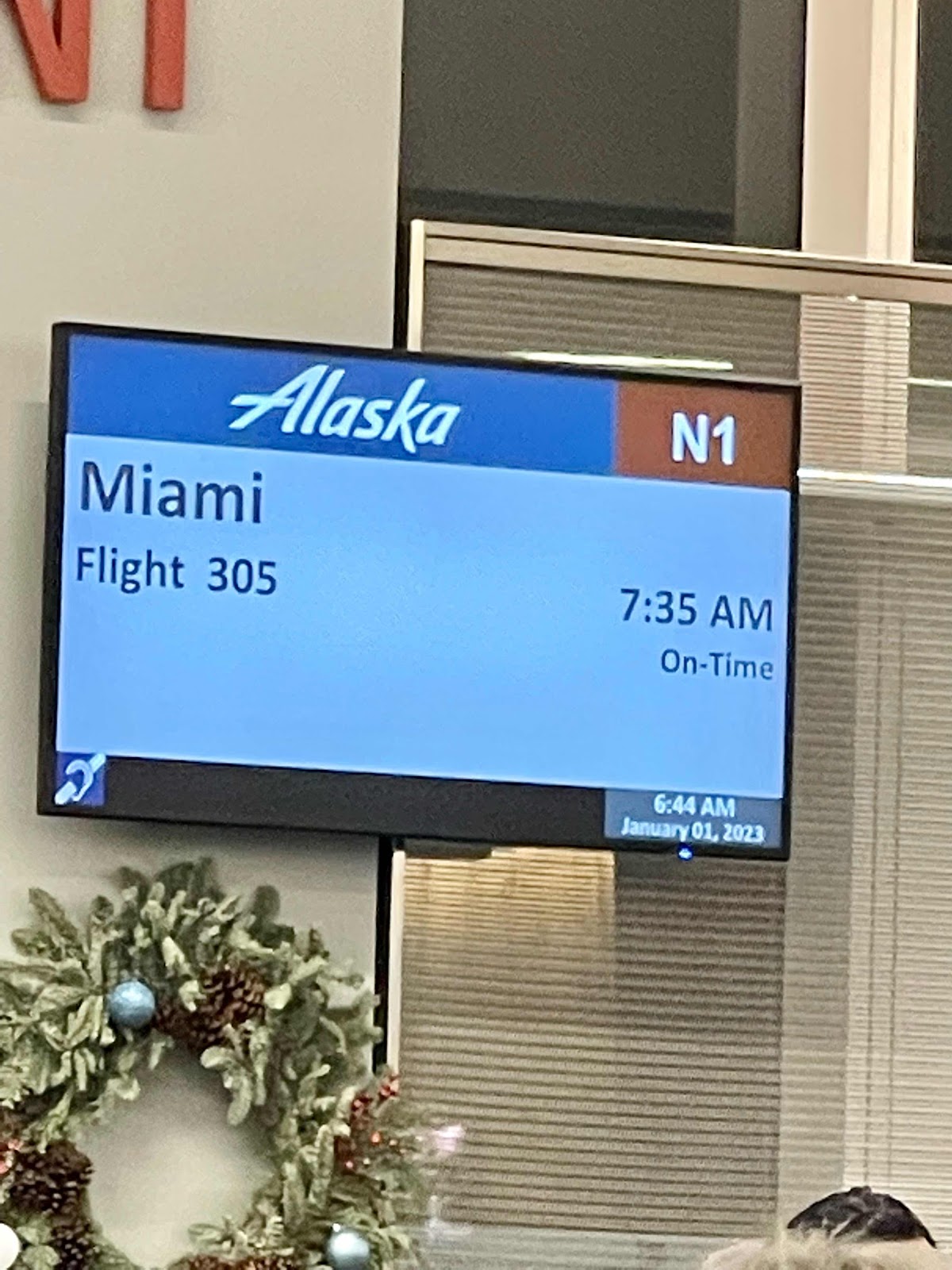 We’d been upgraded to First, and quite enjoyed our five-hour flight, mood lighting and all, despite a few moments of moderate turbulence along the way. Once off the plane, we took a long and slightly confusing walk to find the hotel shuttle area outside and across a street.
We eventually got connected to the Hampton Inn & Suites by Hilton Miami Airport South - Blue Lagoon just as its light blue shuttle van rolled up. Note that most of this information is what scholars of English literature call “foreshadowing.”
Kathy’s two younger brothers and sister-in-law weren’t due to arrive until nearly midnight, so we bought some wine for our cruise  at the Publix supermarket across the street from our hotel, lay down for awhile, and then walked a couple of blocks to a well-reviewed restaurant that was open New Year’s Day.
Amor di Pasta is a quaint little independent joint that lived up to its reputation on Yelp and Trip Advisor. 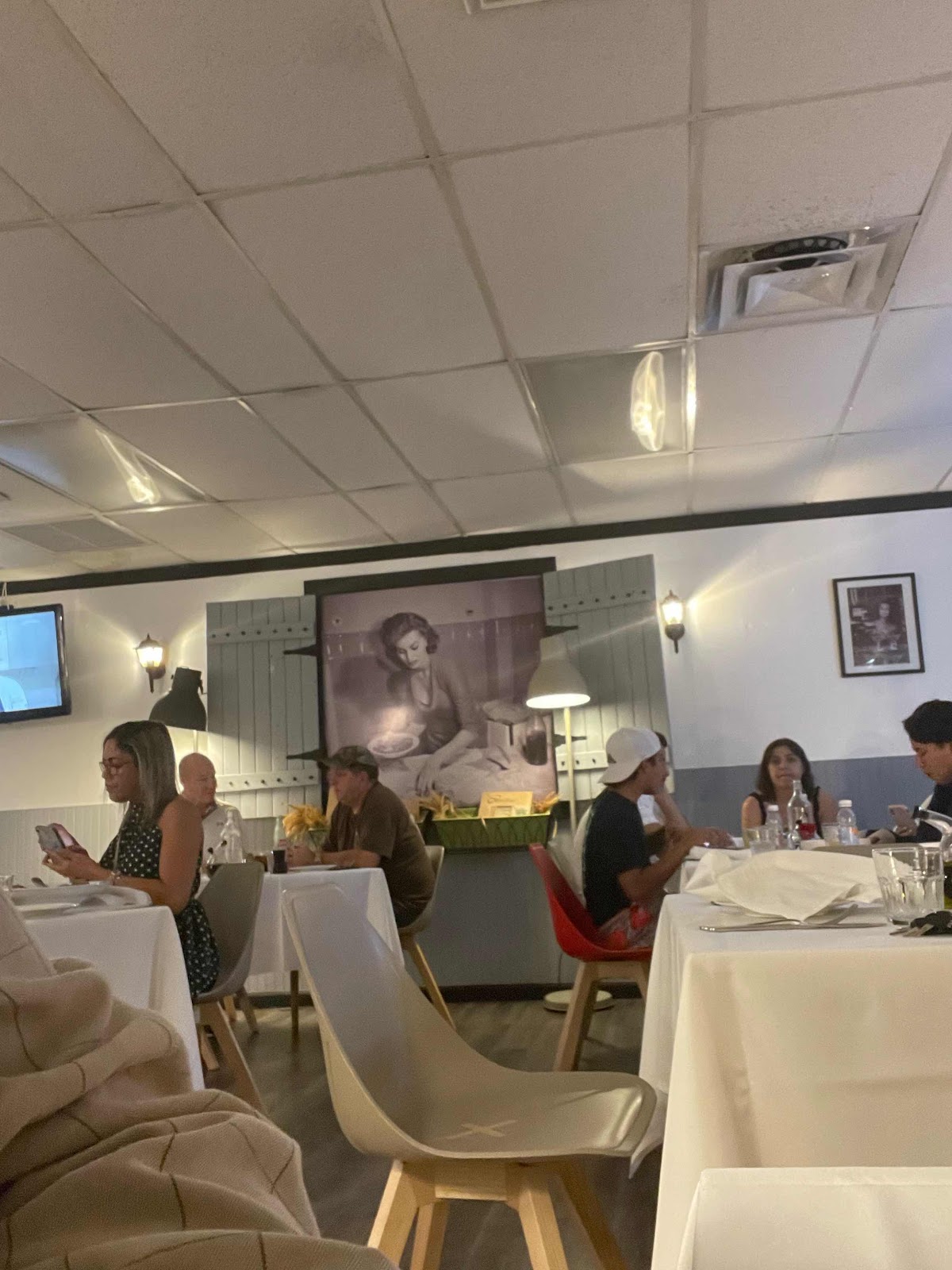 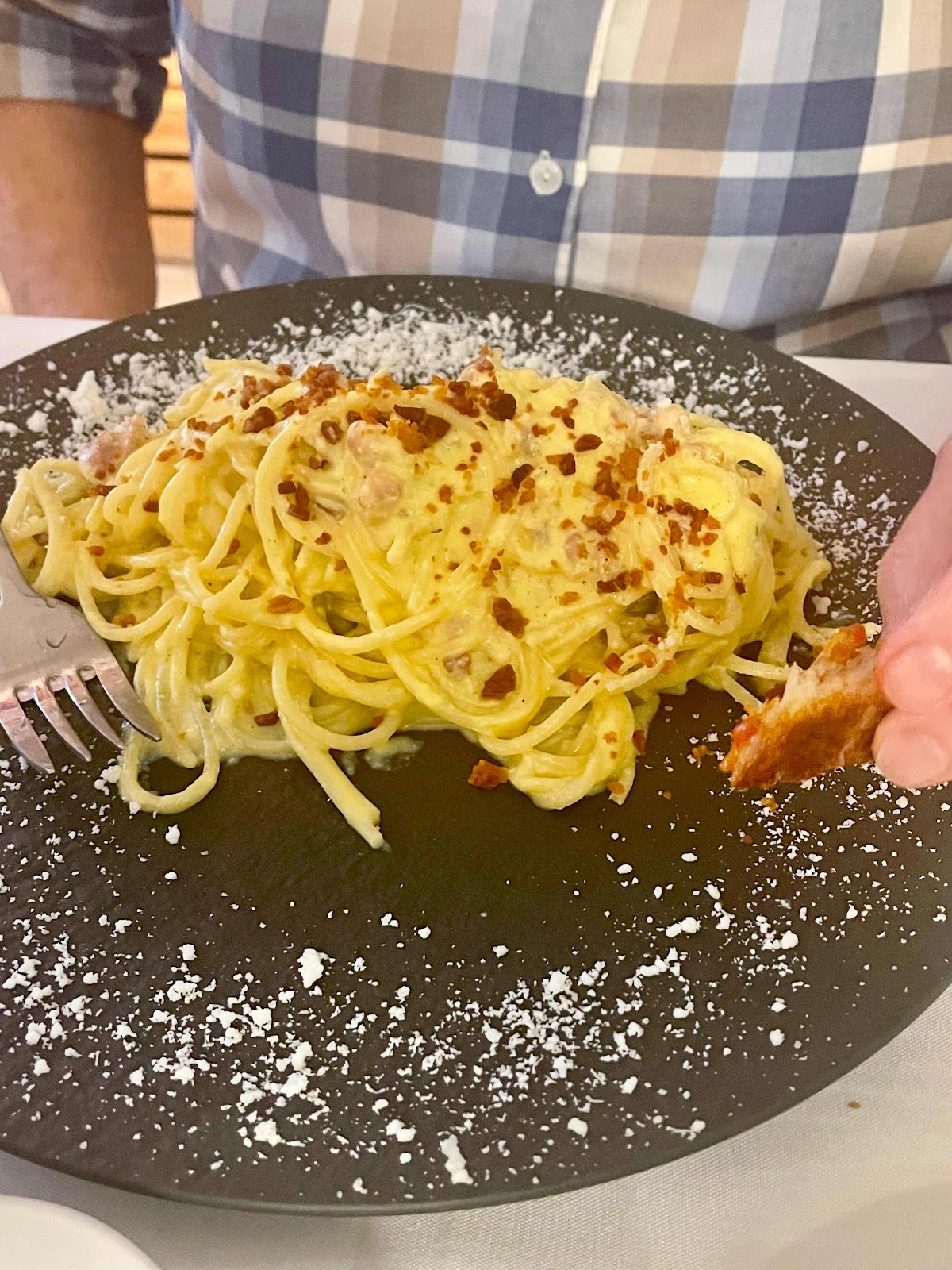 As was Brian’s Lasagne Bolognese… 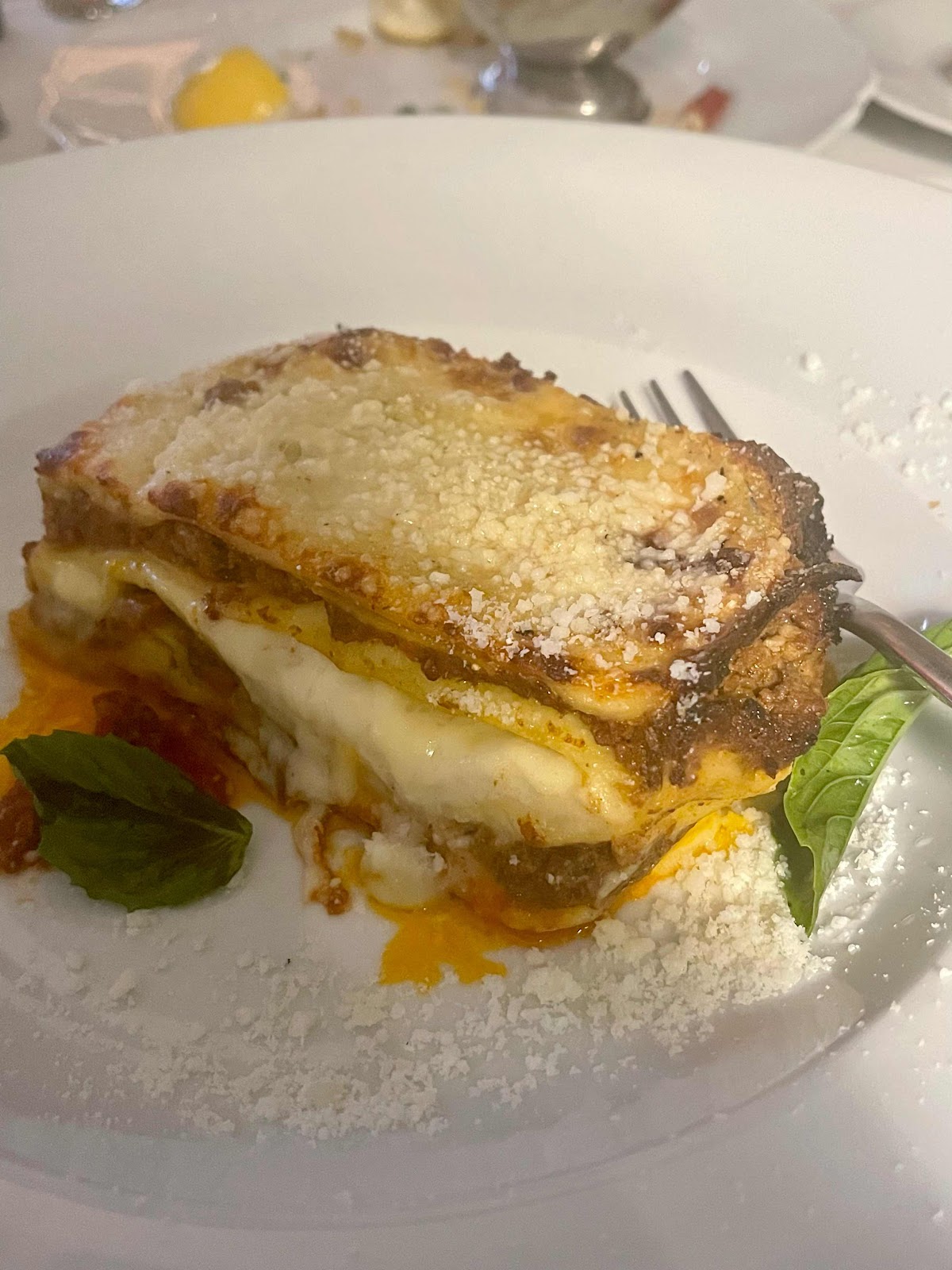 We were also impressed by their house red (at just over $30 a bottle!), as well as the inventive oil-and-vinegar bottle next to it. 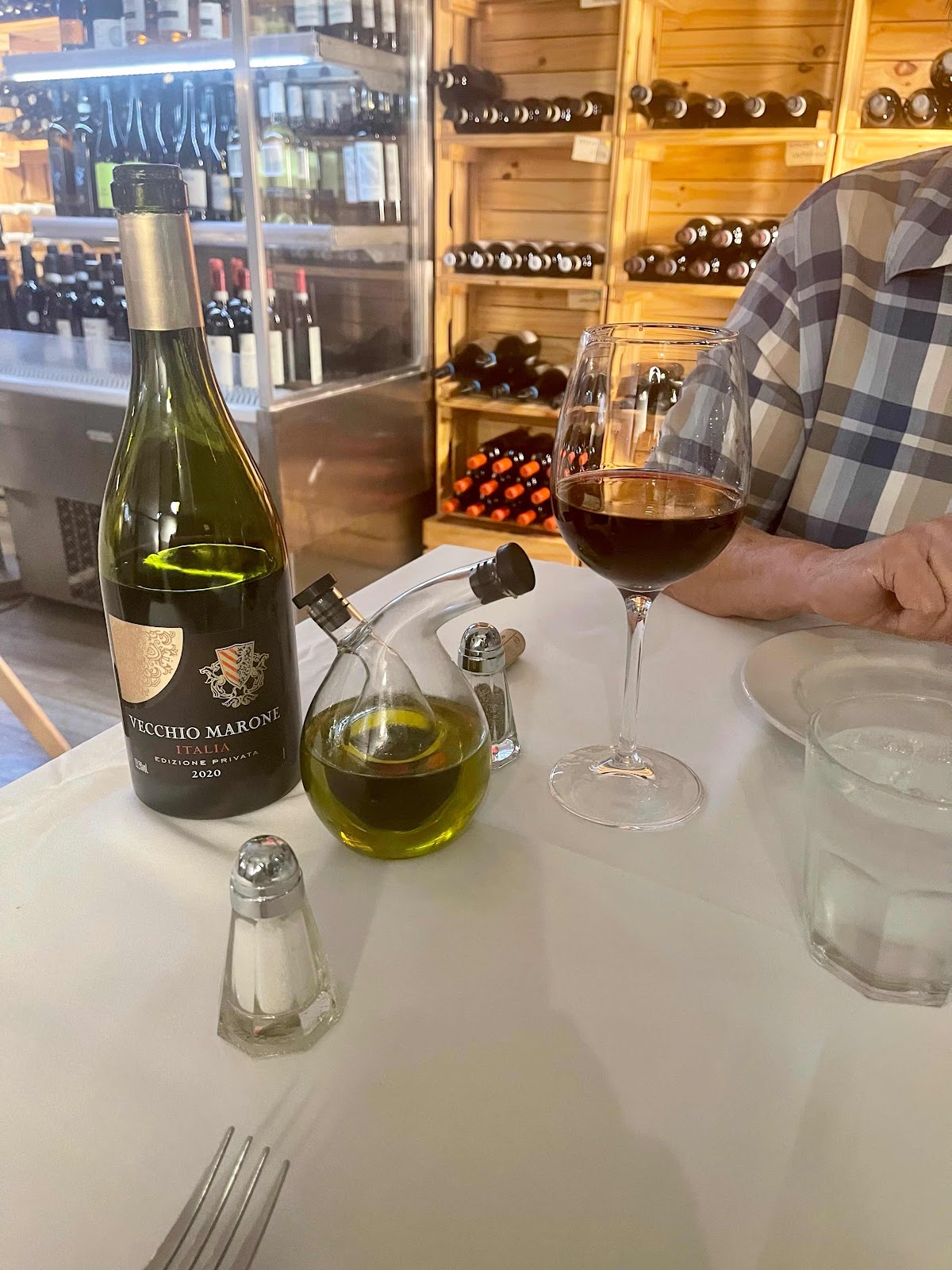 Well fed and happy, we strolled back to the hotel to await news of the others’ arrival. Then the fun started.
Like us, they experienced a few problems reaching the poorly-signed hotel shuttle area. The shuttle arrived back at the lobby just as they found the pickup area. Brian slipped the driver $20 to drive straight back to the airport, sent them a photo of the van and told them to wait for us. 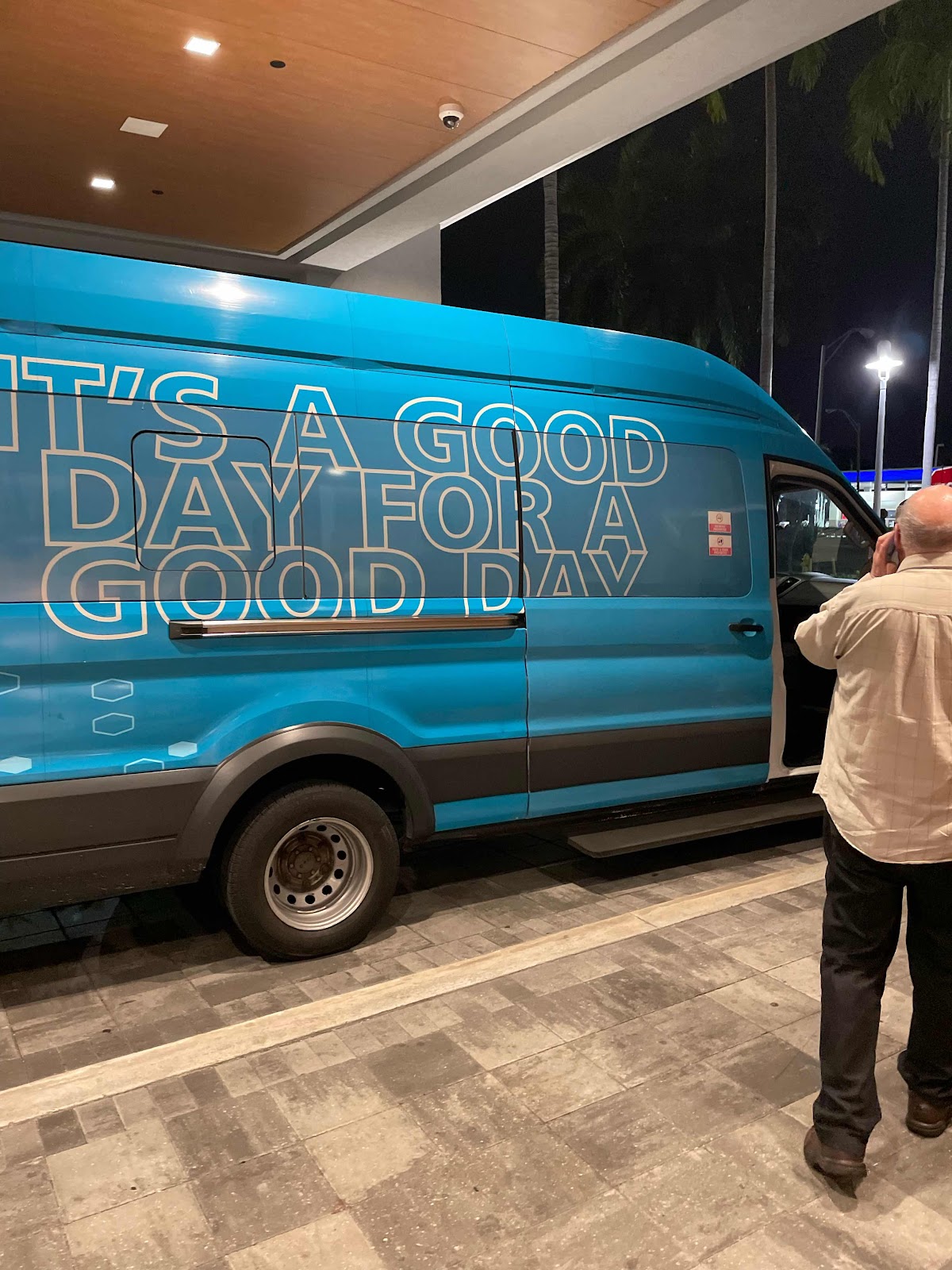 Sister-in-law Ellyn’s ominous reply, received as we were hurtling to the airport in the Hampton Inn van, was “We are on a shuttle but it doesn’t look like that”, a line of dialogue worthy of a horror movie.
The boys (as Kathy’s late mother always n referred to them) had overruled Ellyn and hopped on a van with Hilton and Blue Lagoon on the side. As a consequence, as we were shuttling to the airport, they were shuttling to the wrong hotel, and didn’t even know what it was!
Conversation ensued, and they eventually paid the Hilton driver (yes, it was the Hilton Blue Lagoon) to drive them to the Hampton Inn. They arrived about the same time we did, so it was probably quicker and no more expensive in total than taking a taxi or Uber, if they could even find one for such a short trip.
We’ve moved with the help of a friendly Uber XL driver to the Miami Hilton today, and further adventures no doubt await us. It’s never boring to travel with The Boys. 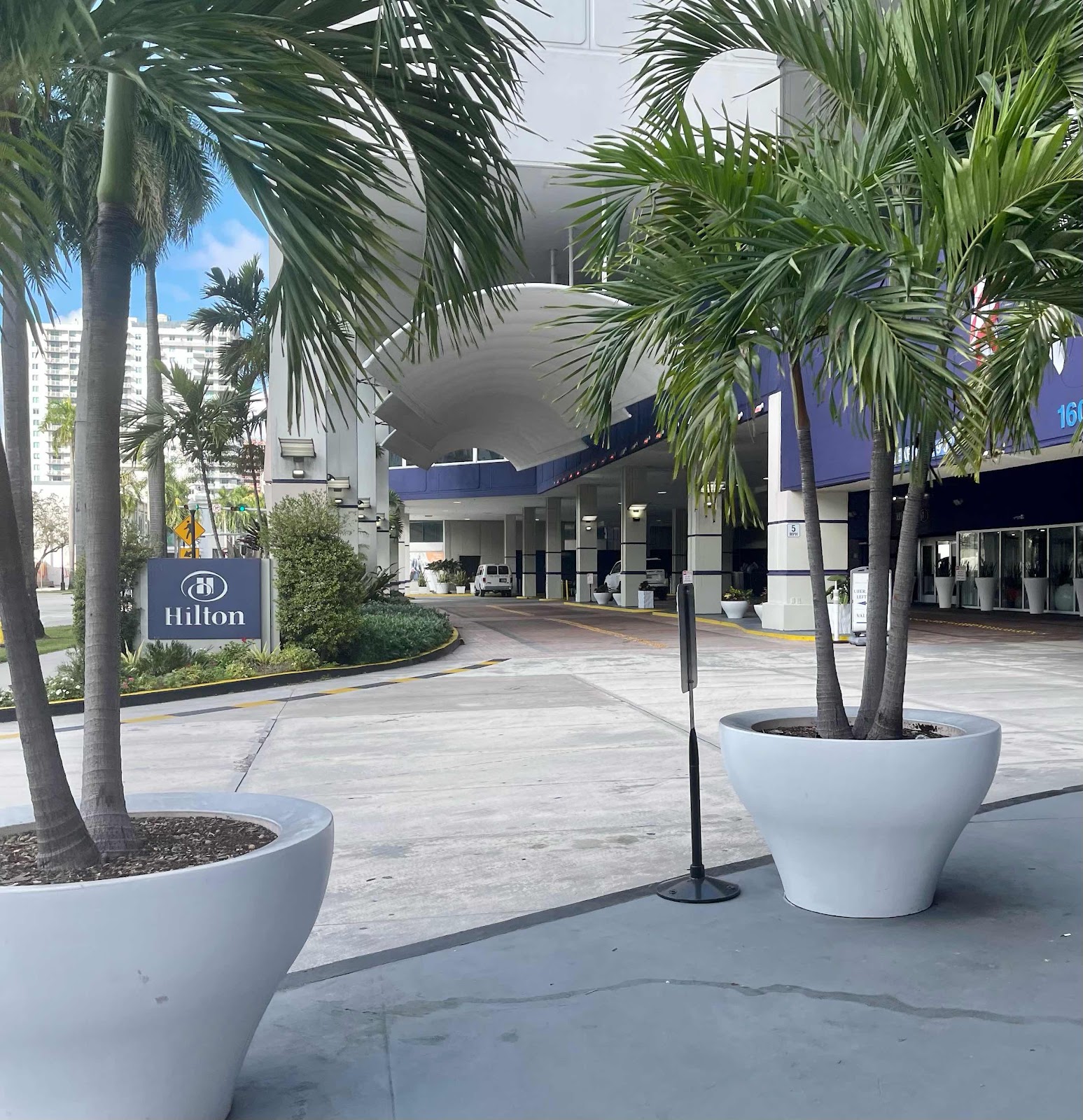 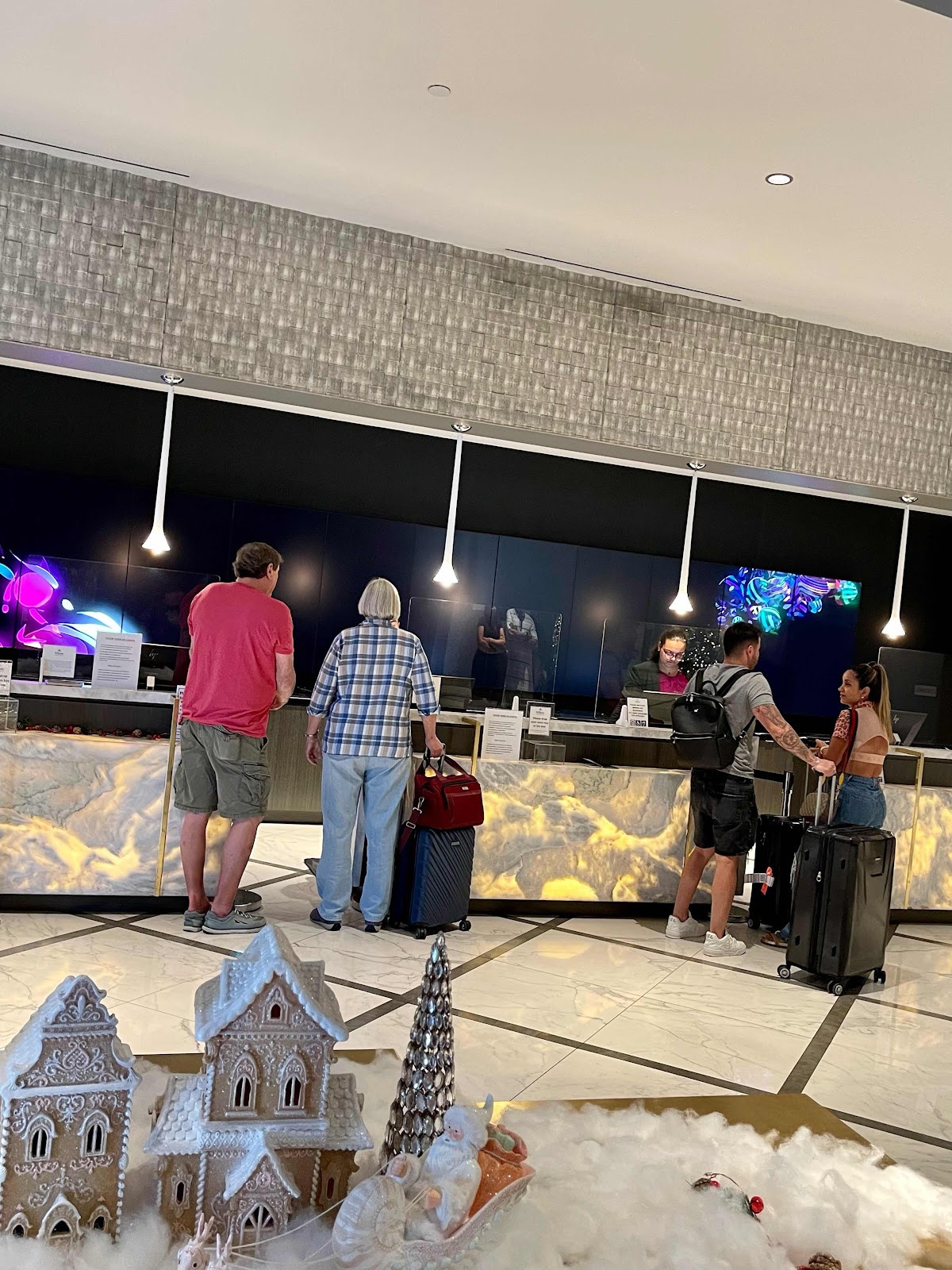 The view of the Miami Cruise Port from Greg’s window: 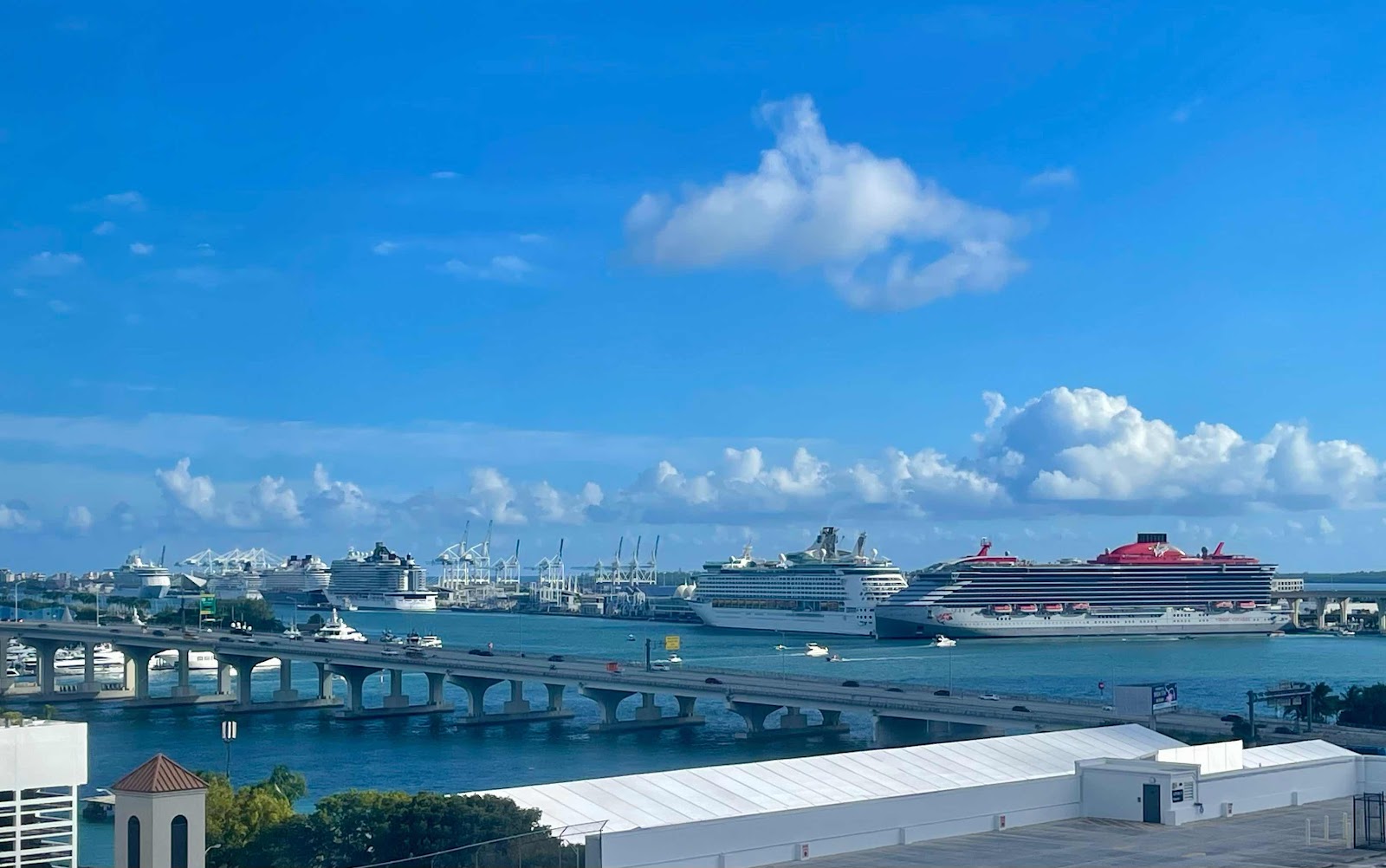 We shared a pizza at New York Pizza, a few blocks away. 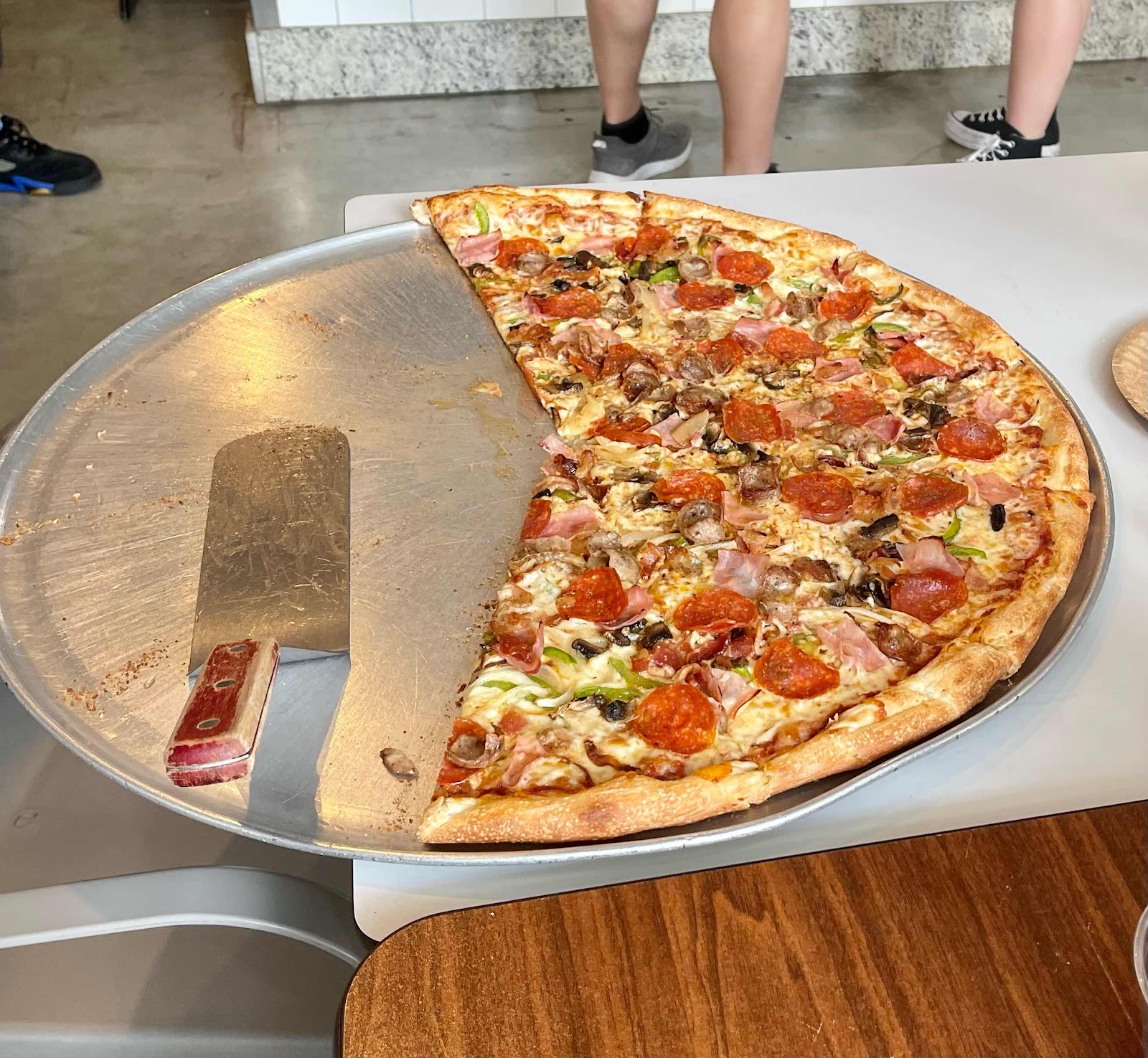 When we returned, we learned that Tom’s and Ellyn’s corner room was ready. 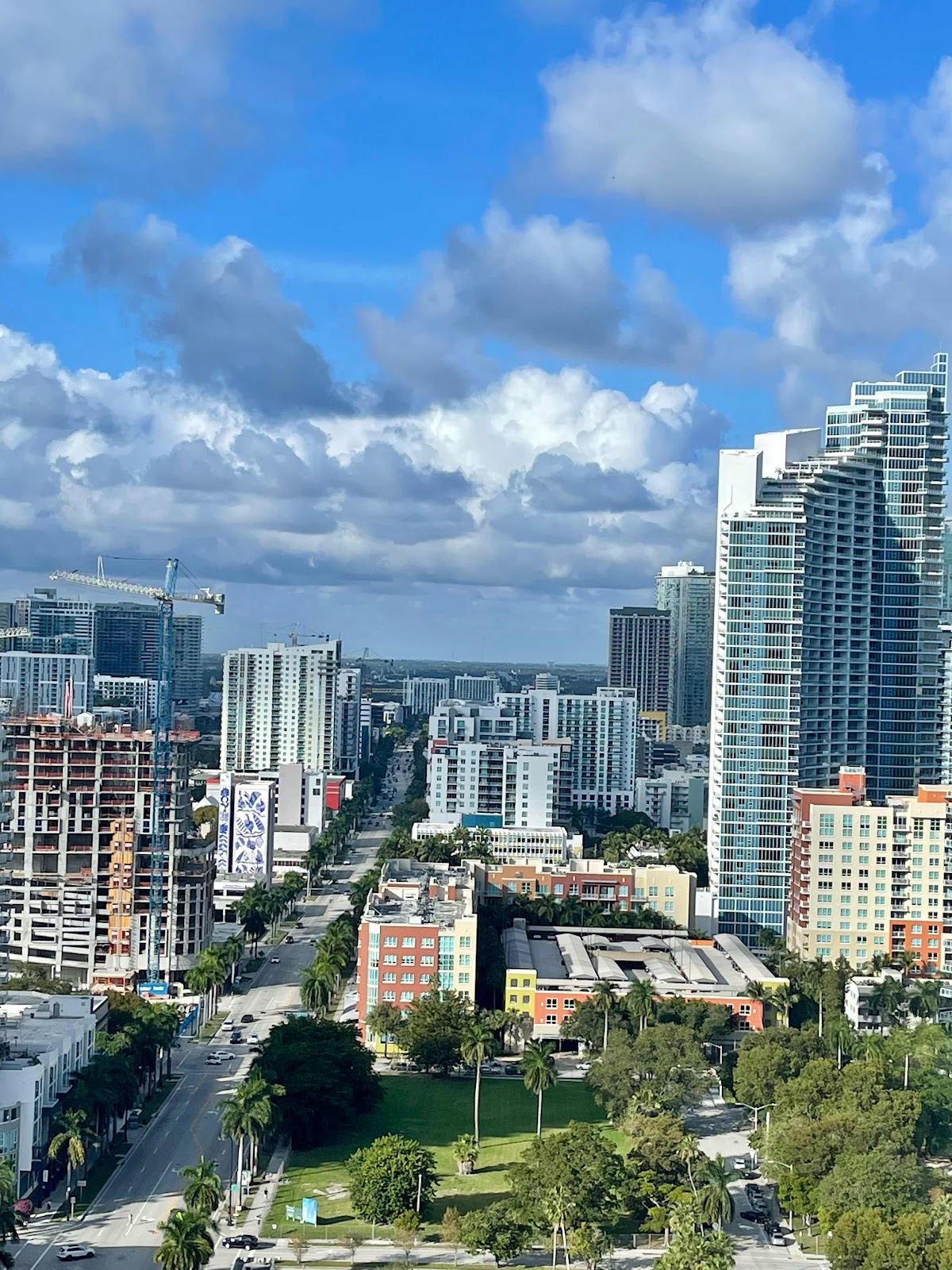 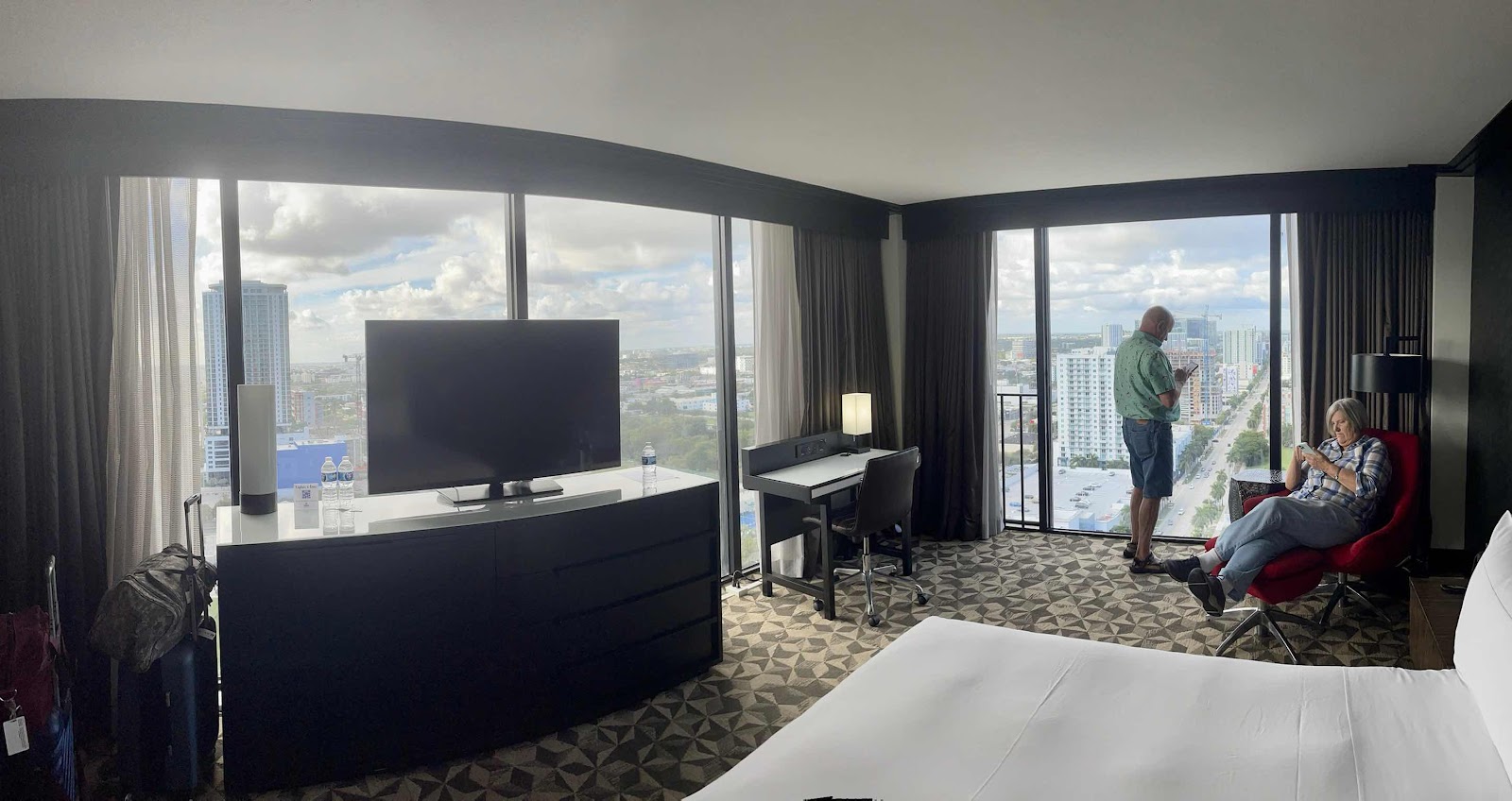 Now to research dinner…
Posted by Kathy and Brian at 8:48 AM