Yesterday we flew MIA-EWR-ORD-SEA. It was all in F but it still made for a long day.

As it turned out, our flight landed a half hour early in Chicago. However, some kind of delay or obstruction resulted in our taking a roundabout route and a 15-20 minute taxi to arrive at our gate. We were still in good time to board our flight to Vancouver at a nearby gate.

After we left the gate, we returned, and found out a young passenger was feeling unwell. She eventually walked off the plane under her own power and we left upwards of an hour late, still managing to land at YVR shortly before 9:00 p.m.

Only two of the five NEXUS machines were working but we managed to get through, pick up our car, and find ourselves at home by 10:30 p.m. local time.

Today we pick up the mail and generally try to catch up.

We did enjoy our first experience being able to leave our Bose Headphones and Kathy's iPod Touch on during takeoff and landing based on the FAA's more relaxed new regulations. Sometimes the small things in life, both good and bad, have an out-of-all-proportion impact - looking down on the clouds as we climbed out of EWR for example... 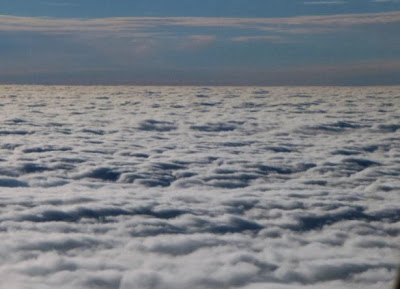