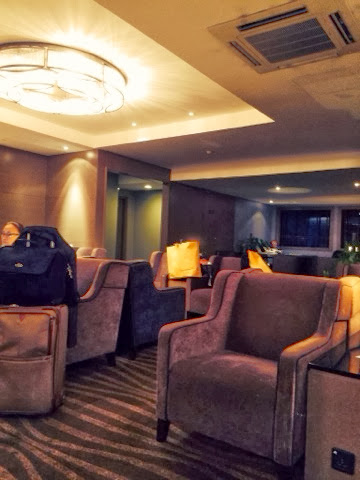 The oddest of all was what the two nice hajib-clad ladies told us at the Singapore Airlines counter. Even though they could not give us our Air Canada boarding pass from Seoul to Vancouver, they said the Singapore 'system' demanded to know how we were traveling onward in Canada, once we told them we live in the U.S.

After some sputtering and sparring we handed over our NEXUS passes for scanning, which seemed to satisfy the 'system.' It's so very odd that we may get around to e-mailing the airline after we get home to find out what the heck that was all about.

The young women apologized for the inconvenience and we told them it wasn't their fault but hoped they understood how odd we found it.

Anyway, the contract lounge is getting less and less crowded as we wait to board our flight in about 20 minutes. We hope to get at least a couple of hours sleep on the four-hour flight before sprinting to the next flight in Singapore on a tight 50-minute connection.

In Seoul we have a leisurely 2 1/2 hour connecting time and then it's back to Vancouver, the car, and home.