We managed a couple of hours of dozing on our HNL-BLI flight. The seats in F offer a lot more room but domestic F seats don't recline very much at all. Still, it was more comfortable than it might have been.

We were set to land early - well before 8:00 a.m. - but we noticed the blanket of fog that covered many square miles as we approached Bellingham. Finally, we headed down into the clouds and seemed to be on the point of touchdown before the pilot accelerated sharply and up we went again.

After awhile the pilot came on to tell us they couldn't see the runway and would try again. After some circling for a number of minutes came try number two. This time Kathy saw a road below with cars on it before we again took off.

This time there was a fair amount of silence until the pilot took to the mike again. He said we would try one last time before flying us down to Seattle, where the fog apparently wasn't an issue. He mentioned in his calmest pilot's voice that fuel was a factor and the plane would "need gas" at some point. After all, we'd just flown from Honolulu to Bellingham on a 737.

As we descended again we could see a few more breaks in the fog but the visibility was definitely still poor. Third time was a charm, however, and we touched down with a fairly hard bump but still quite comfortably.

As we drove up a foggy I-5 toward home a few minutes later, we could barely see the landing lights that mark the BLI runway adjacent to the freeway.

We snapped this photo on our first approach (Mount Baker in the distance), well before we realized we'd be getting three landings for the price of one. 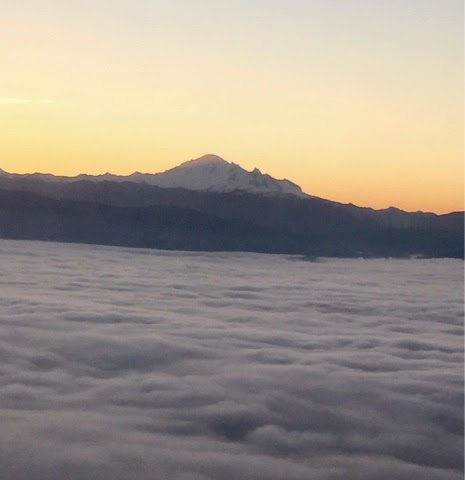 I think, when you use abbreves like HNL and BLI, you ought to give us the Key; for dumb asses like myself.

We hope you didn't go to the trouble of looking up Honolulu (HNL) and Bellingham (BLI). It is a funny habit we share with other frequent fliers and a good reminder to provide a translation.