The Canary Islands, a semi-autonomous part of Spain, are an island chain located off the northwestern coast of Africa, with Arrecife in the East only about 60 miles from Morocco.

Incidentally, the history of the name "canary" is even more interesting than we realized. Most of us have heard that Islas Canarias were named because wild dogs - Latin Canariae - were found there. The Wikipedia entry provides some fascinating (to us) and exhaustive detail about the various theories of the etymology:

Contrary to its name, the islands have little to nothing to do with the canary bird. Rather, it is the bird that is named after the islands, not the converse. The name Islas Canarias is likely derived from the Latin name Canariae Insulae, meaning "Island of the Dogs", a name applied originally only to Gran Canaria. According to the historian Pliny the Elder, the Mauritanian king Juba II named the island Canaria because it contained "vast multitudes of dogs of very large size".

Another speculation is that the so-called dogs were actually a species of Monk Seals (canis marinus or "sea dog" was a Latin term for 'seal'), critically endangered and no longer present in the Canary Islands. The dense population of seals may have been the characteristic that most struck the few ancient Romans who established contact with these islands by sea.

Alternatively, it is said that the original inhabitants of the island, Guanches, used to worship dogs, mummified them and treated dogs generally as holy animals. The ancient Greeks also knew about a people, living far to the west, who are the "dog-headed ones", who worshipped dogs on an island. Some hypothesize that the Canary Islands dog-worship and the ancient Egyptian cult of the dog-headed god, are closely connected but there is no explanation given as to which one was first.

Other theories speculate that the name comes from a reported Berber tribe living in the Moroccan Atlas, named in Roman sources as Canarii. Though Pliny again mentions the relation of this term with dogs.

The connection to dogs is retained in their depiction on the islands' coat-of-arms...

We stop in at Santa Cruz de La Palma, our final port before crossing the Atlantic to Miami. Two small military ships dock about the same time and the crew expends a considerable amount of energy marching up and down and around the dock. Whether the ceremony represents a change of command, some other significant occasion, or simply an opportunity for organized exercise we'll never know.

We wonder if they're Spanish Coast Guard cutters, but a little post-trip research reveals they're probably Spanish Navy corvettes, given that Las Palmas de Gran Canaria is the headquarters of one of the navy's four command zones. 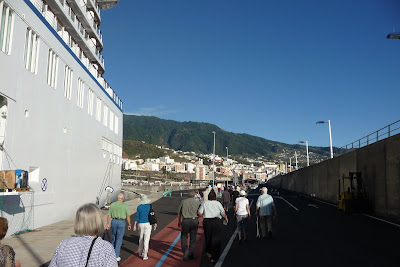 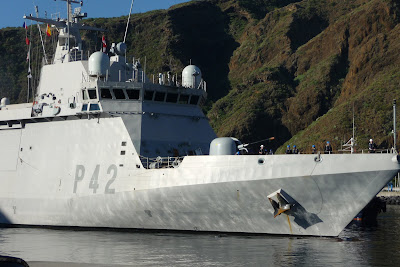 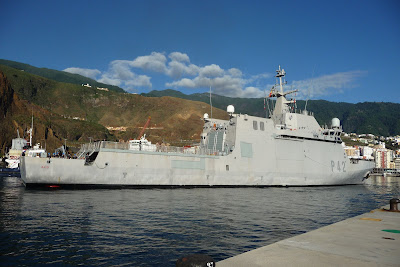 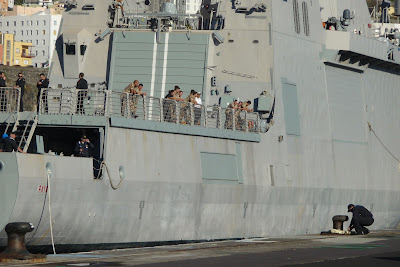 We hop on the free shuttle and find the old town near the port pleasant to wander around for a couple of hours before returning. 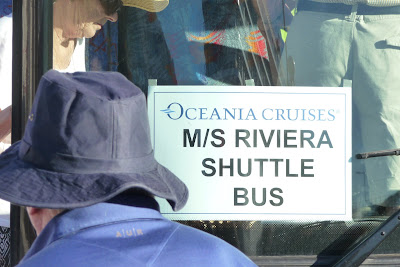 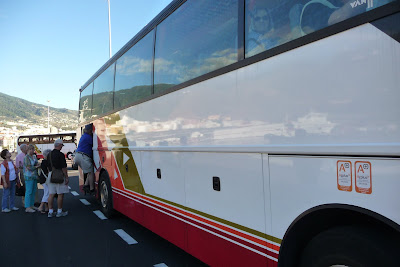 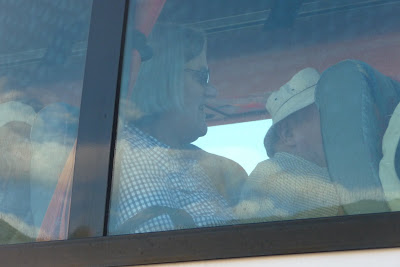 We reboard Riviera in time to watch some marching from our balcony. First the sailors line up for inspection. 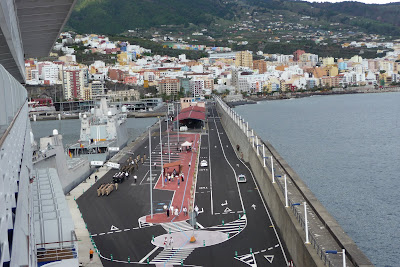 Then they march in our general direction. 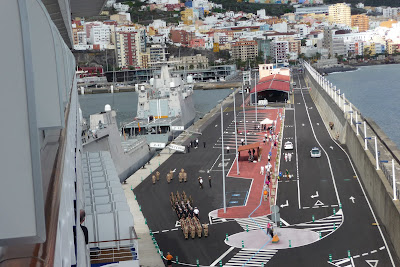 Then they march back. 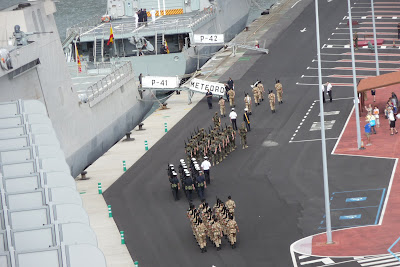 After that, they line up again and circle the entire parking area, but we figure we've already snapped enough marching photos. In fairness, it's clear there's not much marching room and only so many variations to the route.

After all that excitement we gaze a final time at the colorful buildings and ready ourselves with another dose of Meclizine (generic Bonine) to sail across the Atlantic. 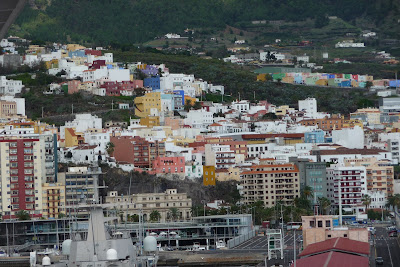