Our trip home worked pretty well according to plan, but we admit to still being tired. We boarded the Hainan 787 that would be our home for the next 14-plus hours, the plane took off, and we changed into the pajamas that this airline provides its business class customers (very comfortable). 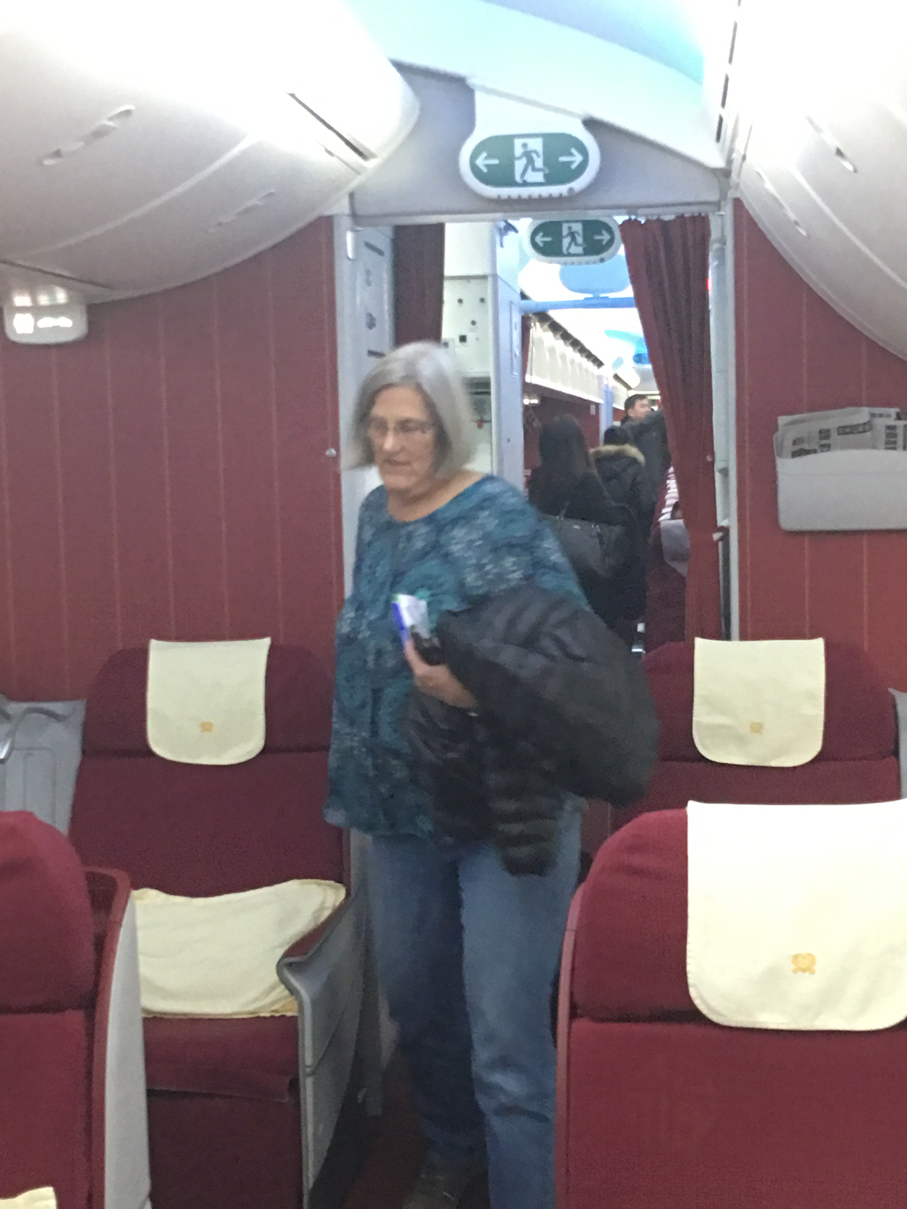 Brian enjoyed a light steak salad, an "express" option close to Midnight China time, but Kathy had eaten her fill at Burano's, the nice Italian joint near the Doubletree, and went to sleep immediately.

Brian was awakened at some point by a beautiful full moon shining in through the windows on the opposite (right) side of the plane to our seats. Although the cell phone doesn't do it justice, we ended up with an interesting (ethereal?) photo. 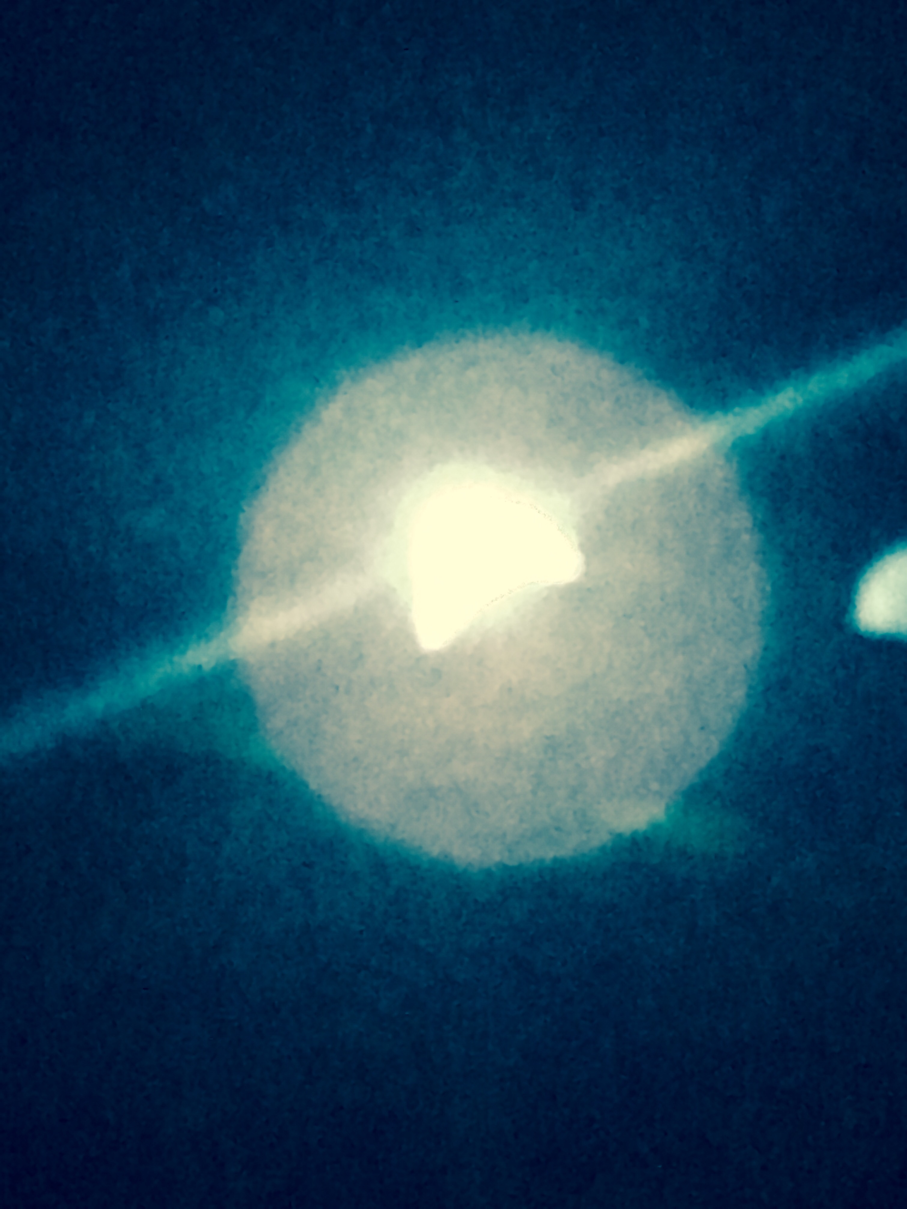 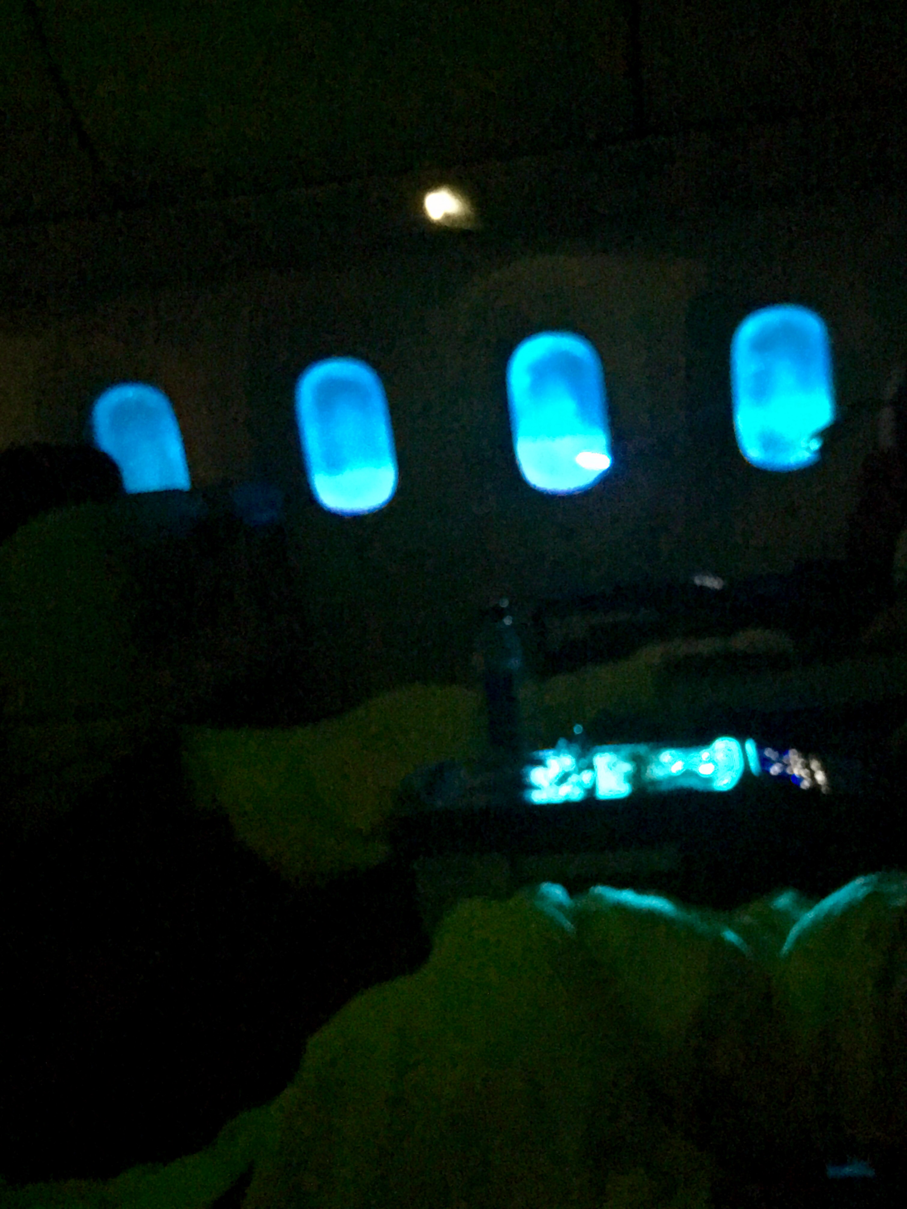 We didn't bother with an inflight snack, but took advantage of the dinner they served toward the end of the flight, Udon noodles for Kathy, and more pasta for Brian.

Incidentally, Hainan is the only airline we recall flying that offers cute little individual bread baskets to each passenger, and the breadsticks and rolls arrive warm and quite tasty. 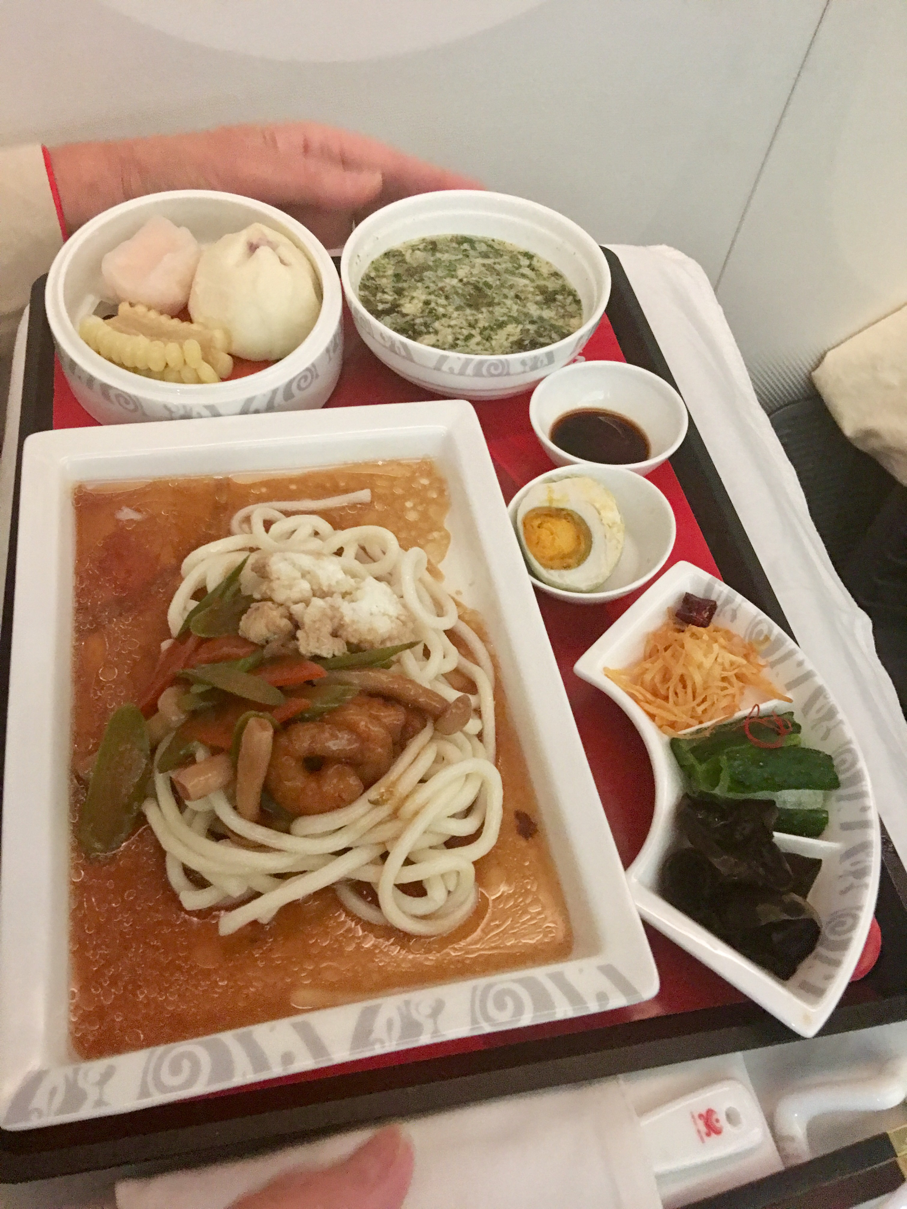 Brian had already generously shared one of his breadsticks with Kathy when this photo was taken. 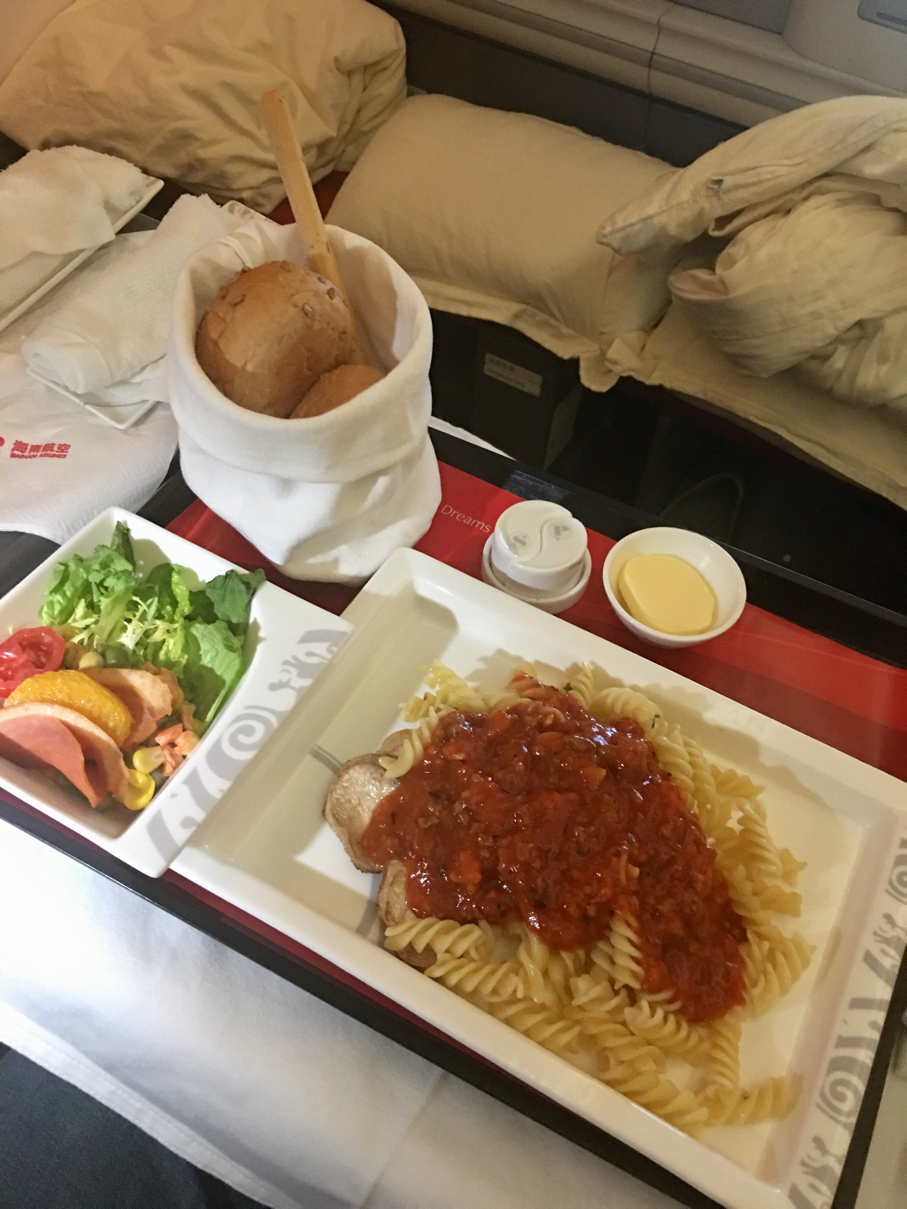 Before we knew it, we had flown about 8,150 miles and arrived about a half hour early at JFK in the densest fog either of us had experienced on a landing. We literally first saw lights - runway lights - about five seconds before we touched the runway. Now, that's a low ceiling.

Our Hainan chauffeur was there to meet us, as we whisked through Global Entry with our carry-ons and were out in a few minutes. He drove us to the JFK Hilton, where we spent the next two nights. Here's a view from our window.

Going to breakfast Tuesday morning, we were amazed to see Mort, a Flyertalk friend of quite a few years' standing,  whom we have seen many times in Australia. He and his wife, Anita, were on their way to Australia to board a cruise, and equally surprised to see us. We've almost lost count of the number of Flyertalk friends we've run into in various parts of the world, e.g. Bangkok, London, Cusco. We enjoyed visiting with them, and talking travel (naturally). 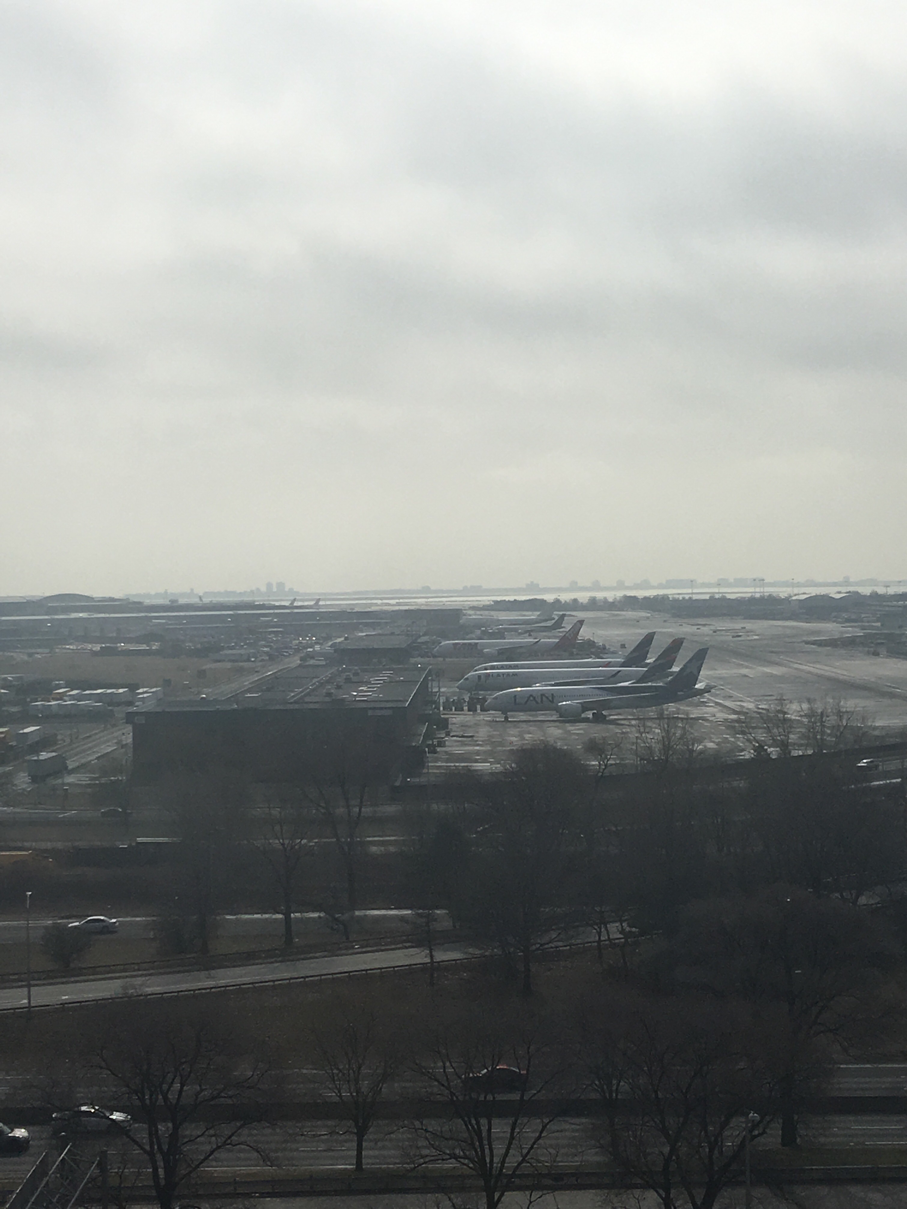 We were sufficiently tired that we skipped riding into New York City yesterday. We basically napped and relaxed for much of the day, eating a light dinner in the Hilton restaurant.

We woke up really early this morning, and caught the 4:30 AM shuttle to JFK, arriving at Terminal 7 close to half an hour later. Terminal 7 is the new home of Alaska, and it's just as dismal as we were warned (on Flyertalk) it would be. A lot of renovation is going on, and no doubt the environment will improve for Alaska customers when a new lounge is completed there (estimated optimistically to open in April 2018).

The TSA checkpoint is crowded, with the employees yelling instructions, and a general atmosphere of barely controlled chaos. What a contrast it was to the efficient security operation at Chongqing's airport.

Once inside, we found some good (but expensive) coffee, and then headed toward our flight, which was using a British Airways gate. 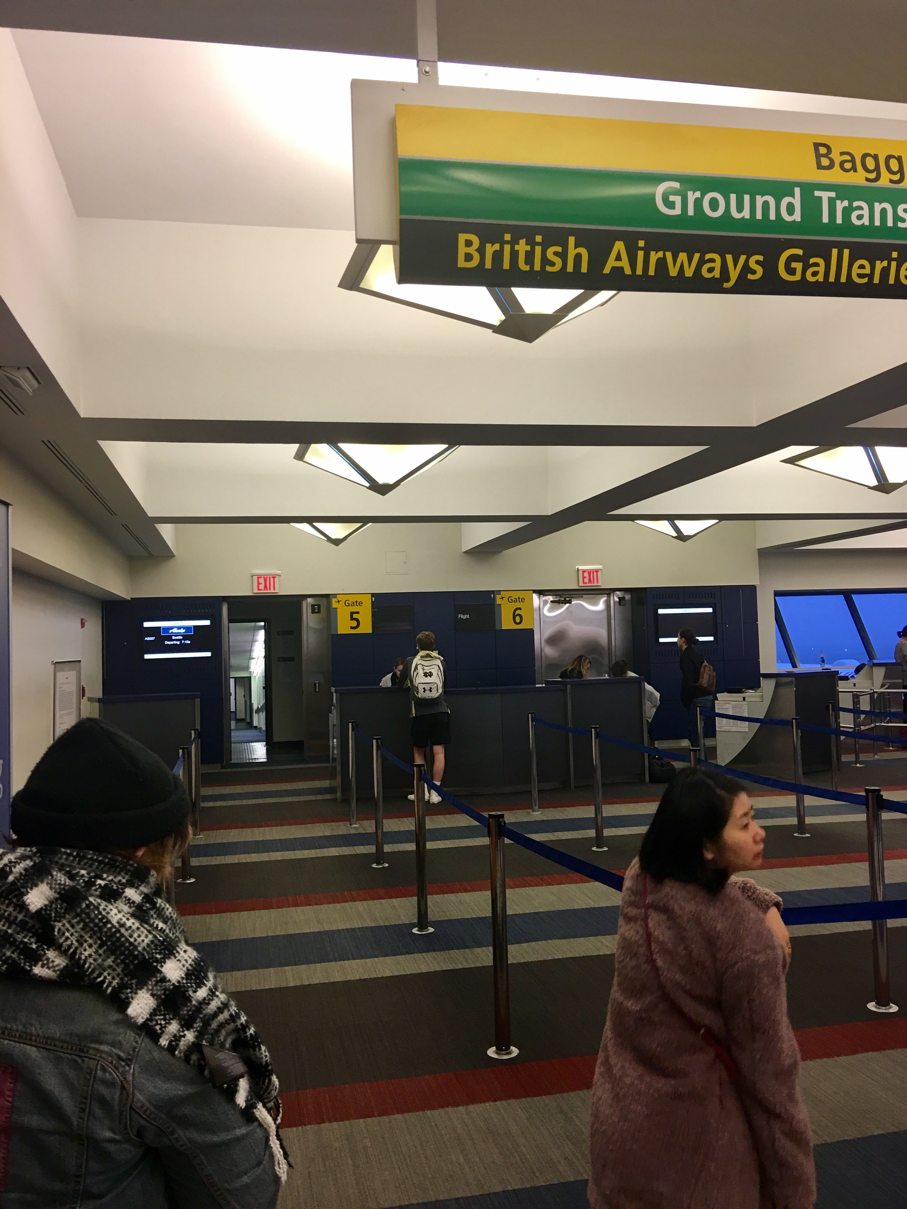 The incoming plane was a bit late, and they couldn't get the jet bridge completely connected to the plane, which delayed boarding by almost half an hour. In the end, the pilot and co-pilot acted as doormen at the entry, warning passengers to "mind the gap." These Alaska pilots were good sports about it.

We eventually took off on a fairly foggy morning, but we were up into clearer air before long and enjoyed the flight in 1D and 1F. 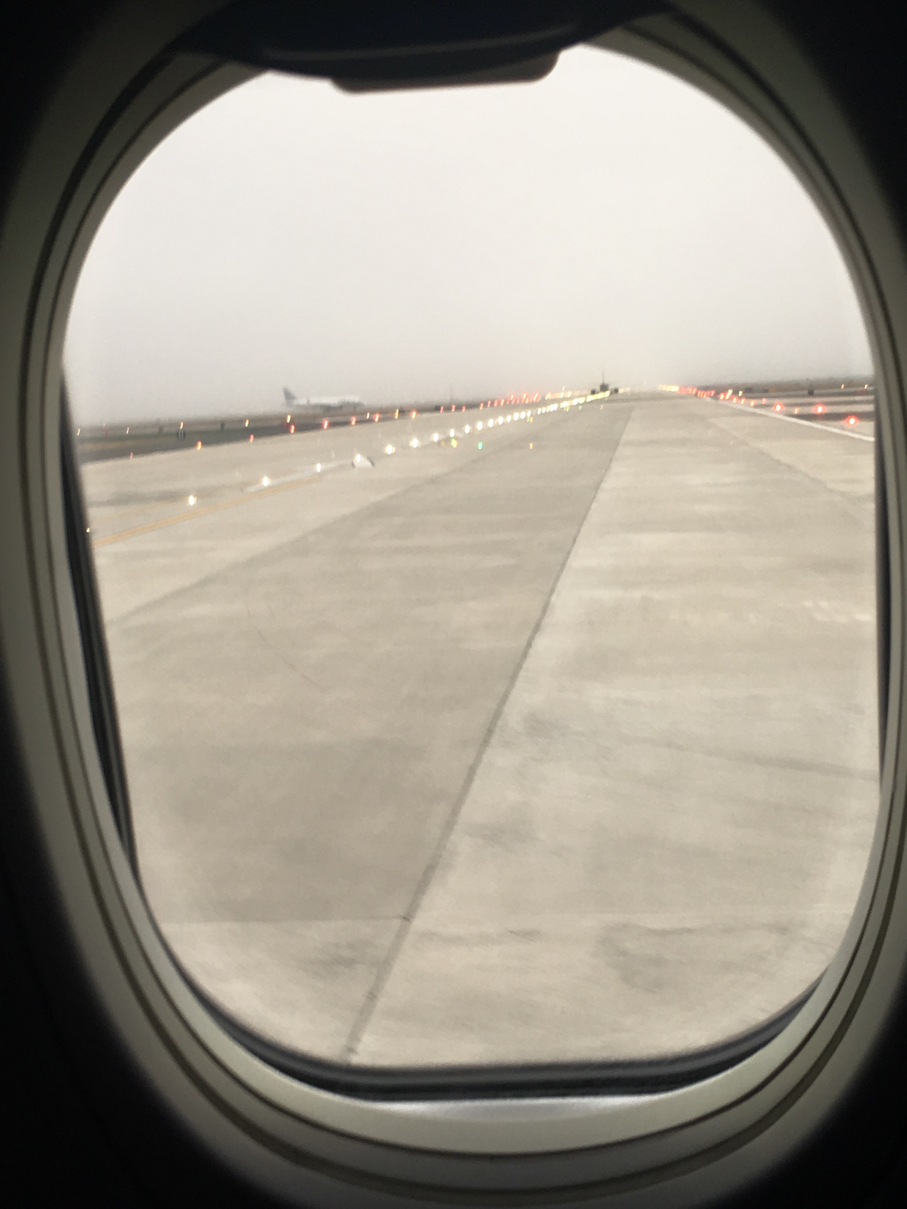 We landed on time at SEA, the time having been made up, retrieved our car from the Doubletree, and drove home in reasonable mid-day traffic. As we drove down Sehome Road, we saw our first flakes of snow.

This is what the back yard looked like around 2:00 PM. It's time for a nap, after which we'll admire the snow from inside the house.

Snow and all, it's always nice to back home. 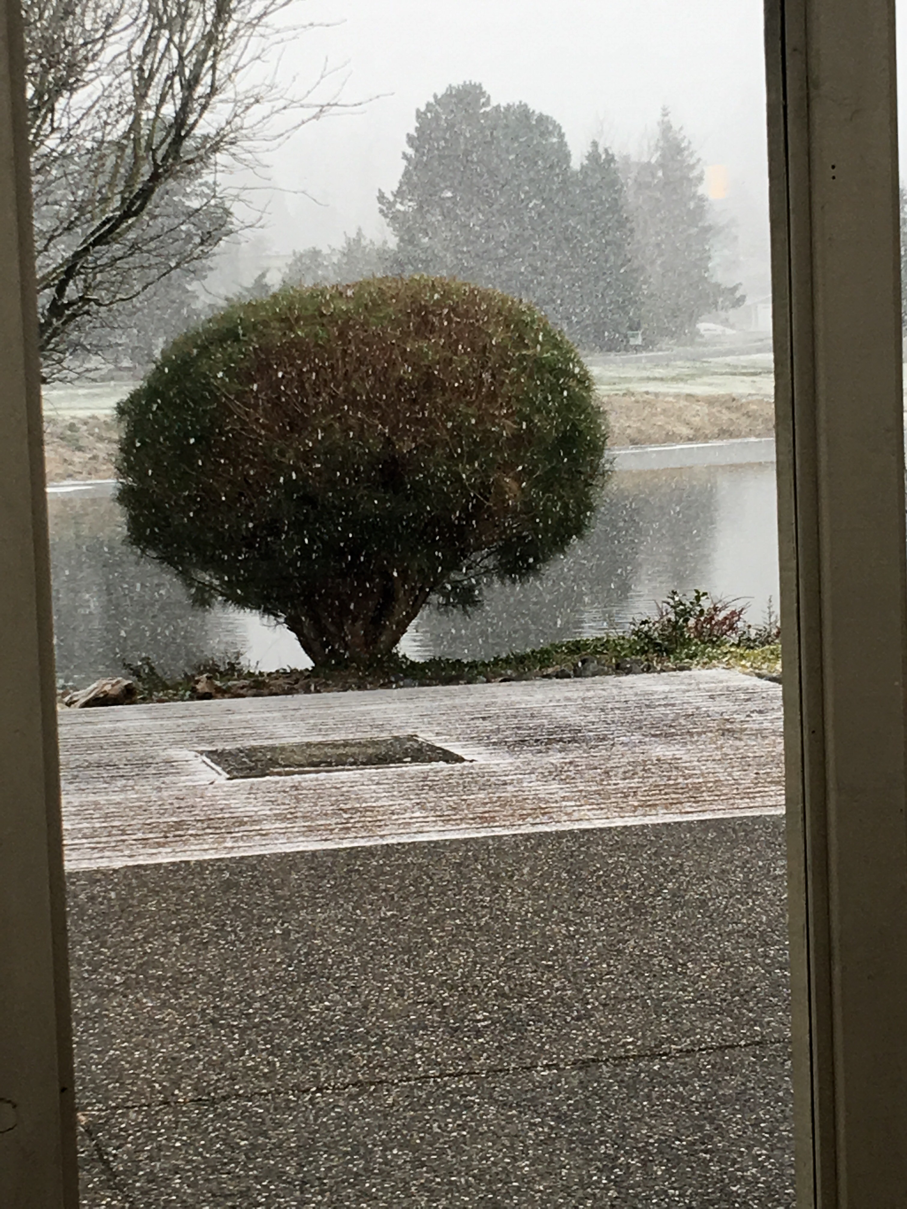