A Trip Down Memory Lane: Our Stolen Wallet in India

A few readers have already sent us emails or commented on our blog about our recent post, Pickpockets: Perils and Precautions. We always appreciate and enjoy the feedback!

We had mentioned in passing our 2012 experience in Delhi, India, in which Kathy's mesh shoulder bag was surreptitiously cut and her wallet removed. We'll recount that here in greater detail.

It occurred during the first of three trips we've made to India, this one in the very congenial company of Kathy's younger brother, sister-in-law, and niece. We had endured an arduous day of train travel, riding the rails from Agra to Delhi after visiting the Taj Mahal the day before. Notice in the photo that the two of us are wearing our SCOTTeVests. Ironic! 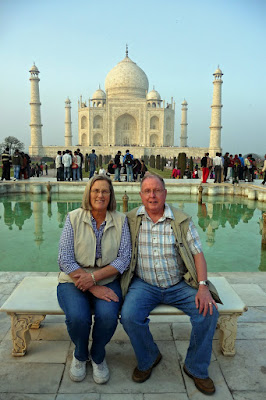 We only noticed when we were about to leave our Delhi hotel the next morning that the mesh had been cut on Kathy's small shoulder bag and her wallet had been removed.

We suspected it occurred at the security checkpoint which we had to traverse at the train station to board the subway to our hotel. Women were searched separately from men and segregated for modesty in private booths, Thus, while the bags are separated from the passengers there are ample opportunities for crooked employees to spot the wallet on an X-Ray or else to quickly rifle through the belongings of tourists (we always dress modestly, but we definitely look like we're from out of town in India!).

Kathy was carrying very little cash, a couple of plastic cards, her Washington State Driver's License, and a restaurant gift certificate. Still, momentary panic ensued as we were scheduled to leave for the airport soon to catch a flight.

Even in 2012 we were storing online a list of the credit cards, ATM cards, and IDS we carry in our wallets.  We called our son via internet and asked him to cancel Kathy's cards, even though we know our liability is limited. We managed to make it to the airport in time to catch our flights to Goa.

That trip included an annoying episode when we had to re-clear security while connecting at BOM (Mumbai). It seems our travels within India, whether by car, train, or plane, always tend to be grueling. We then carried on with the trip that encompassed most of the Golden Triangle and Goa.

A week or two after we returned home the US Embassy in Delhi emailed us that somebody had turned in Kathy's ID at the embassy, and that they would be shipping it to us. Not long after that, we received a certified cover letter and package containing her driver's license, the restaurant gift certificate, and a long-expired Continental Airlines Platinum Elite card.

All Kathy lost of any value was her leather wallet, and she didn't have to go through the nuisance of obtaining a new driver's license. It could have been worse!

After all that, maybe in fairness we should revisit a few of our many positive and downright amazing experiences in India, but that will have to be another day.