It took us about three hours of largely stress-free driving to travel from our hotel to Carthage, a still-small Illinois town where Kathy’s great-great grandfather arrived in 1840.
After a forgettable lunch at the town’s most popular restaurant (according to TripAdvisor), we found the ideal spot for genealogical research at the Carthage Historical Society. 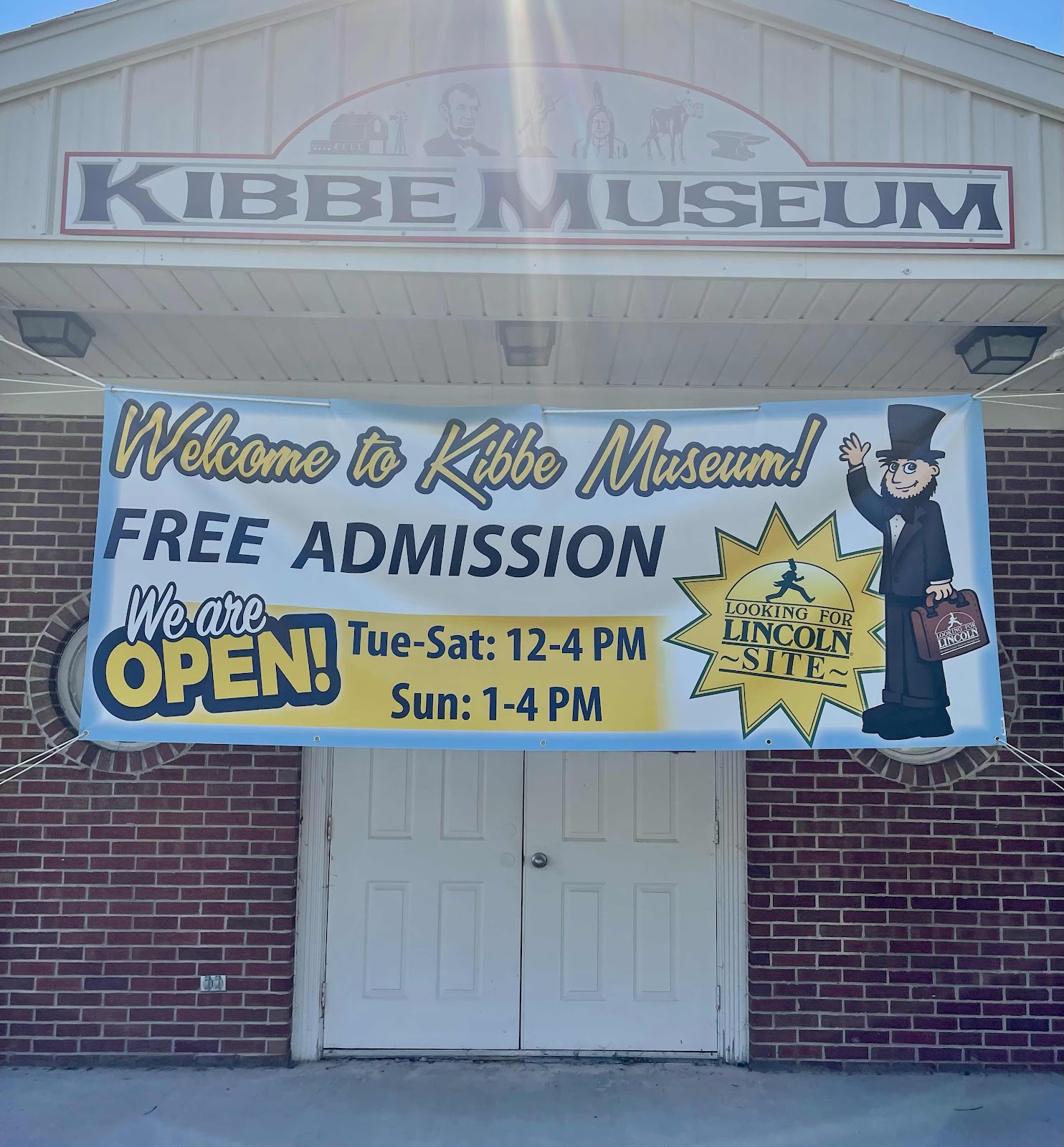 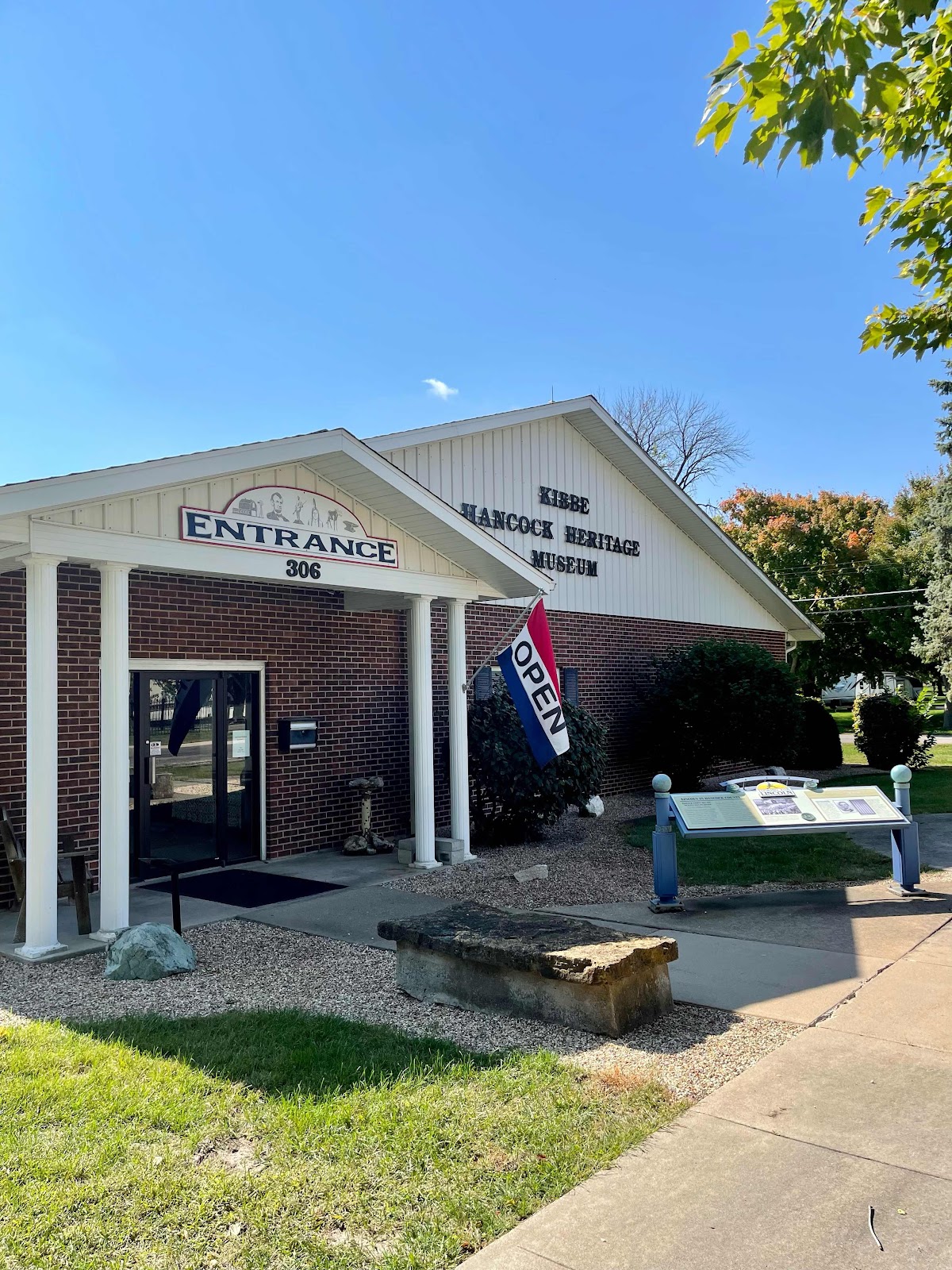 With considerable assistance from the chief volunteer archivist / researcher, Keith, we pored over old originals and photocopies, and emerged a couple of hours later with a pile of photocopies. 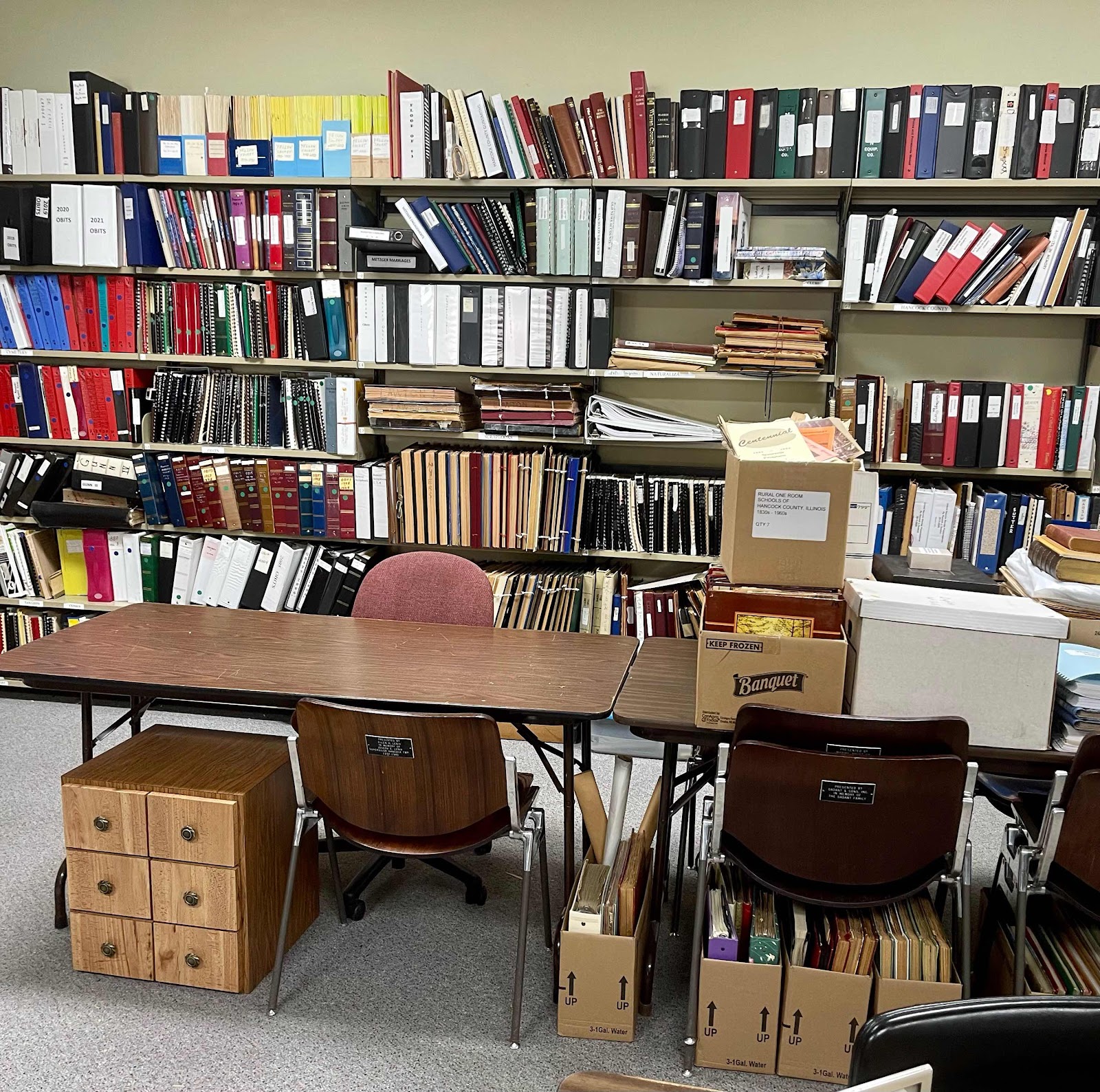 Before leaving, we took a too-hasty tour of the Kibbe Museum, a well designed display where we also saw photos of Hamilton House and the first Elisha Bentley Hamilton in the Civil War. 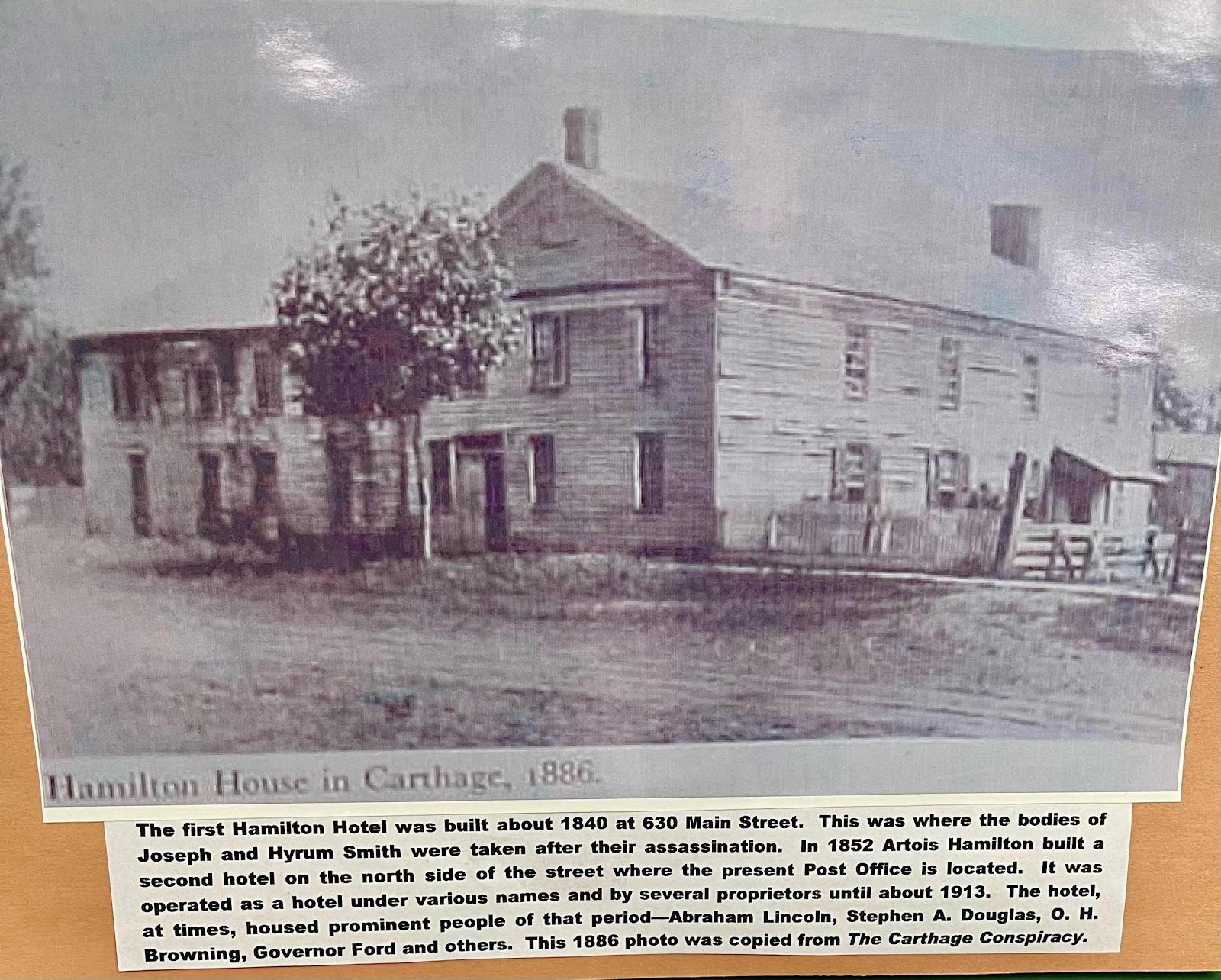 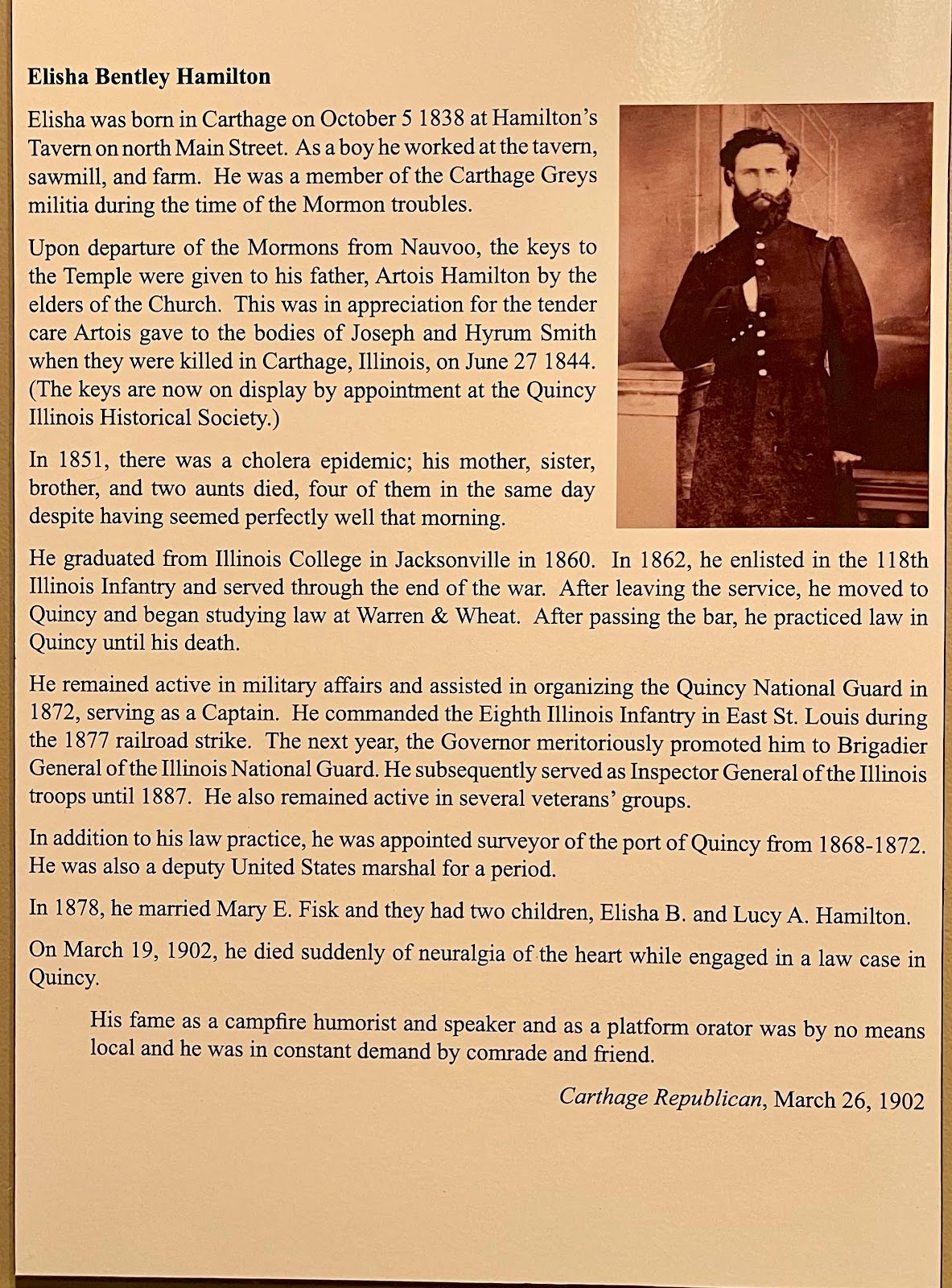 Later we walked across the street to the original Carthage jail, where an organized mob killed the Mormon prophet Joseph Smith and his brother Hyrum. The Church of Jesus Christ of Latter Day Saints bought the property and now offer tours. We toured it on our previous visit in the early 80s and settled this time for gazing at the window Joseph jumped or fell from. 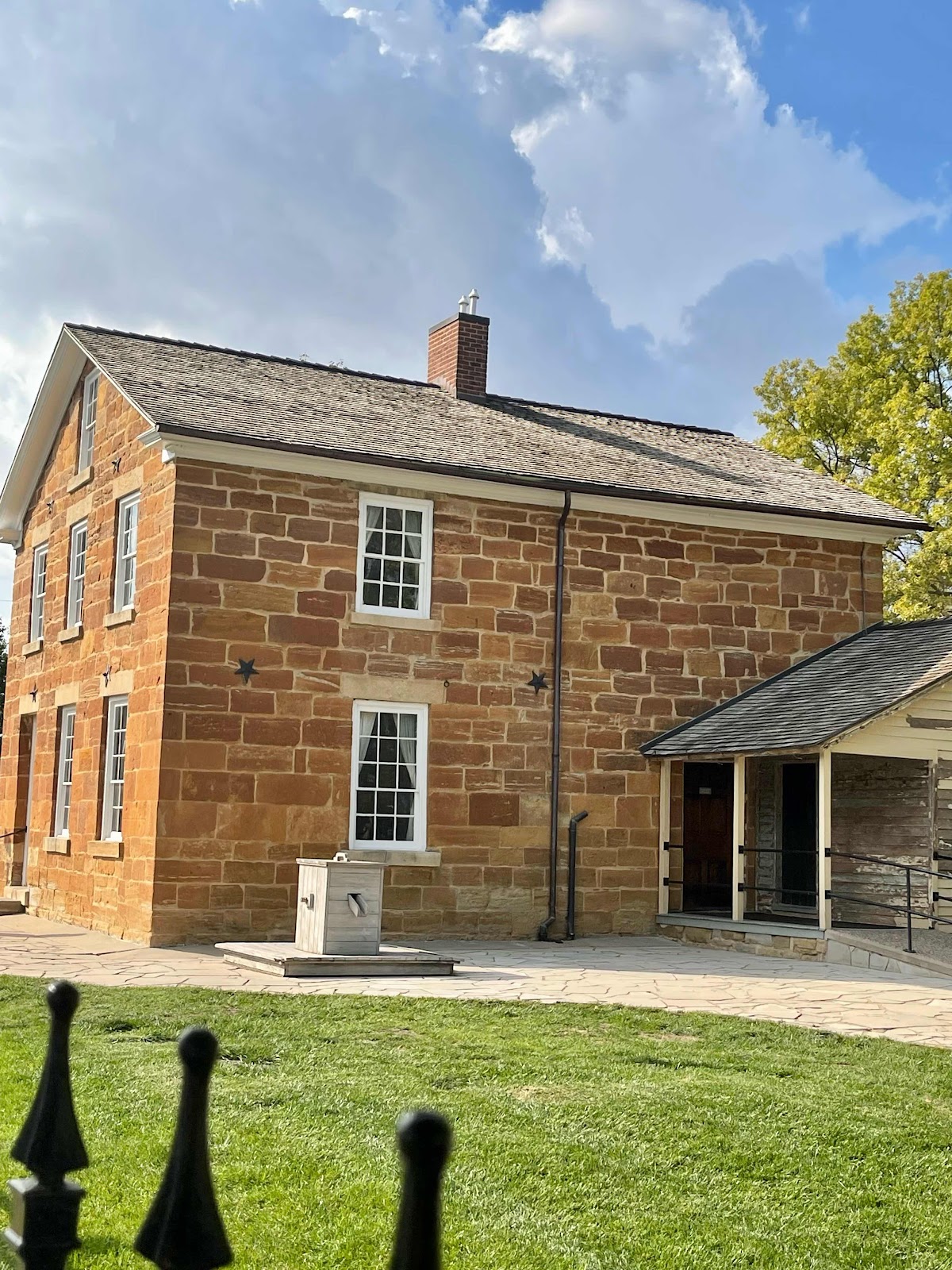 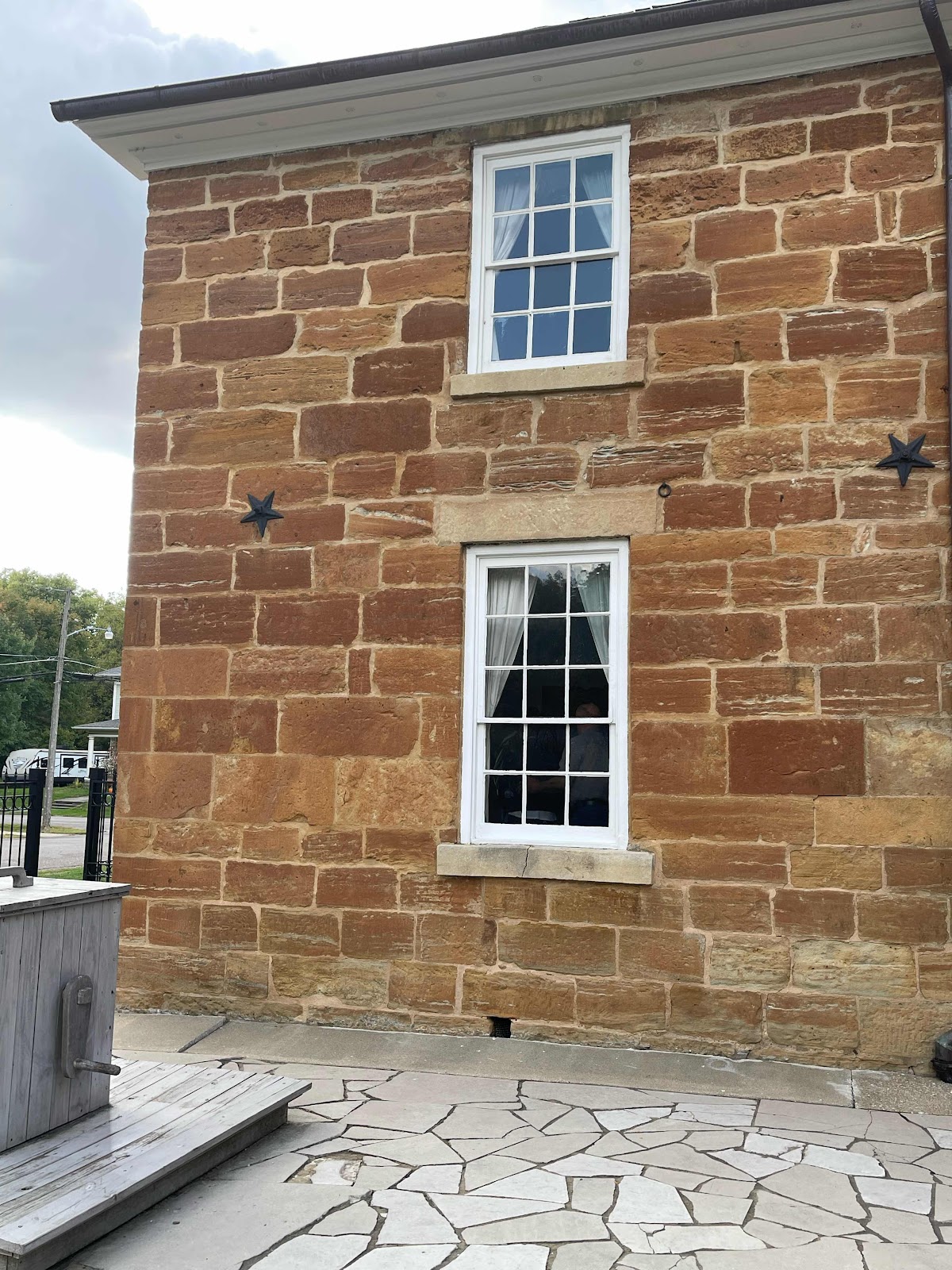 Artois by one account courageously reprimanded a crowd gathered in front of his hotel while seeking help to retrieve the bodies and return them to the Mormons.
We wanted to pay a visit to the old Carthage Cemetery and found our way there without much difficulty. The condition of most of the gravestones has deteriorated since our previous visit, including those of Artois and his family. 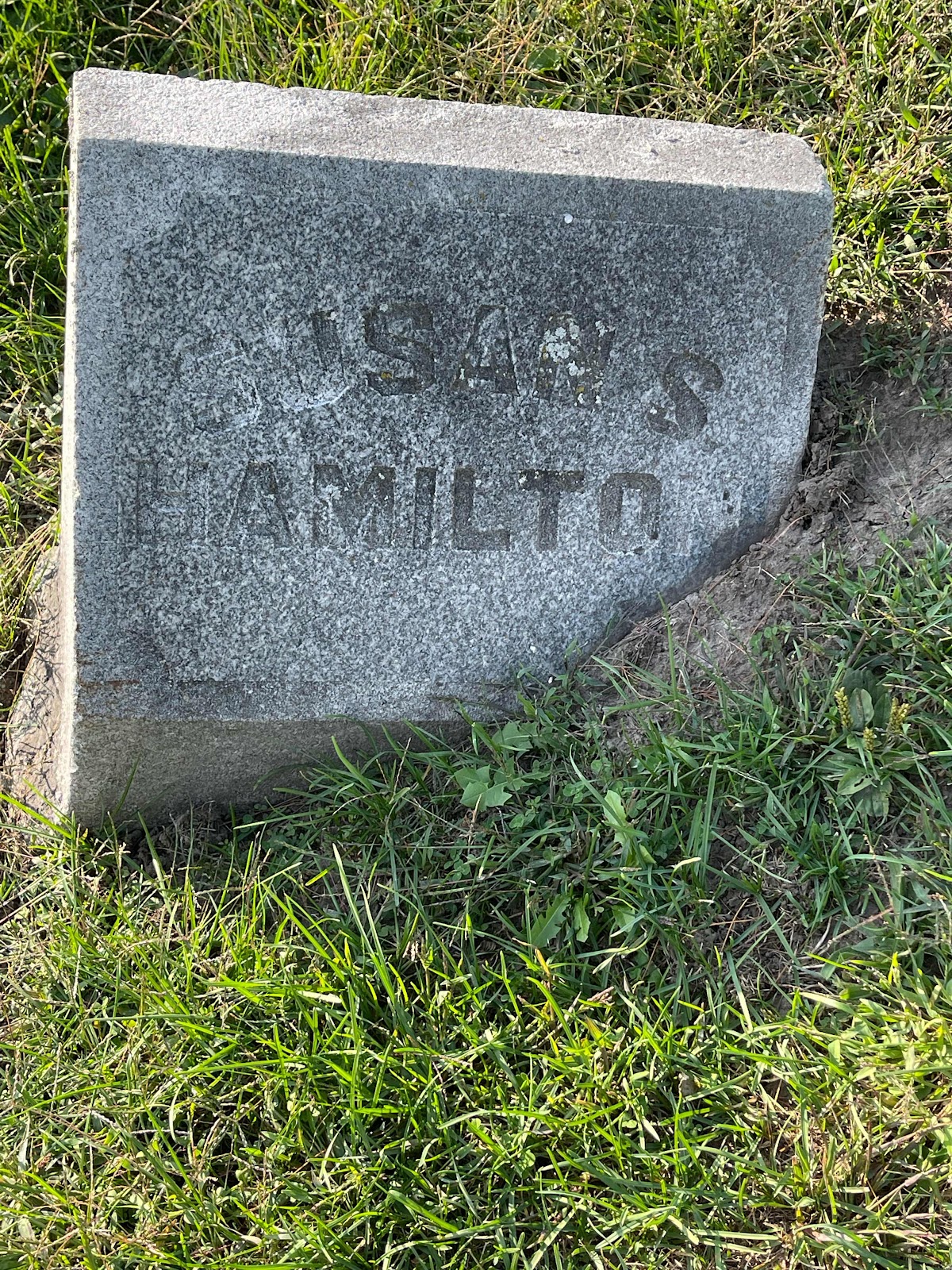 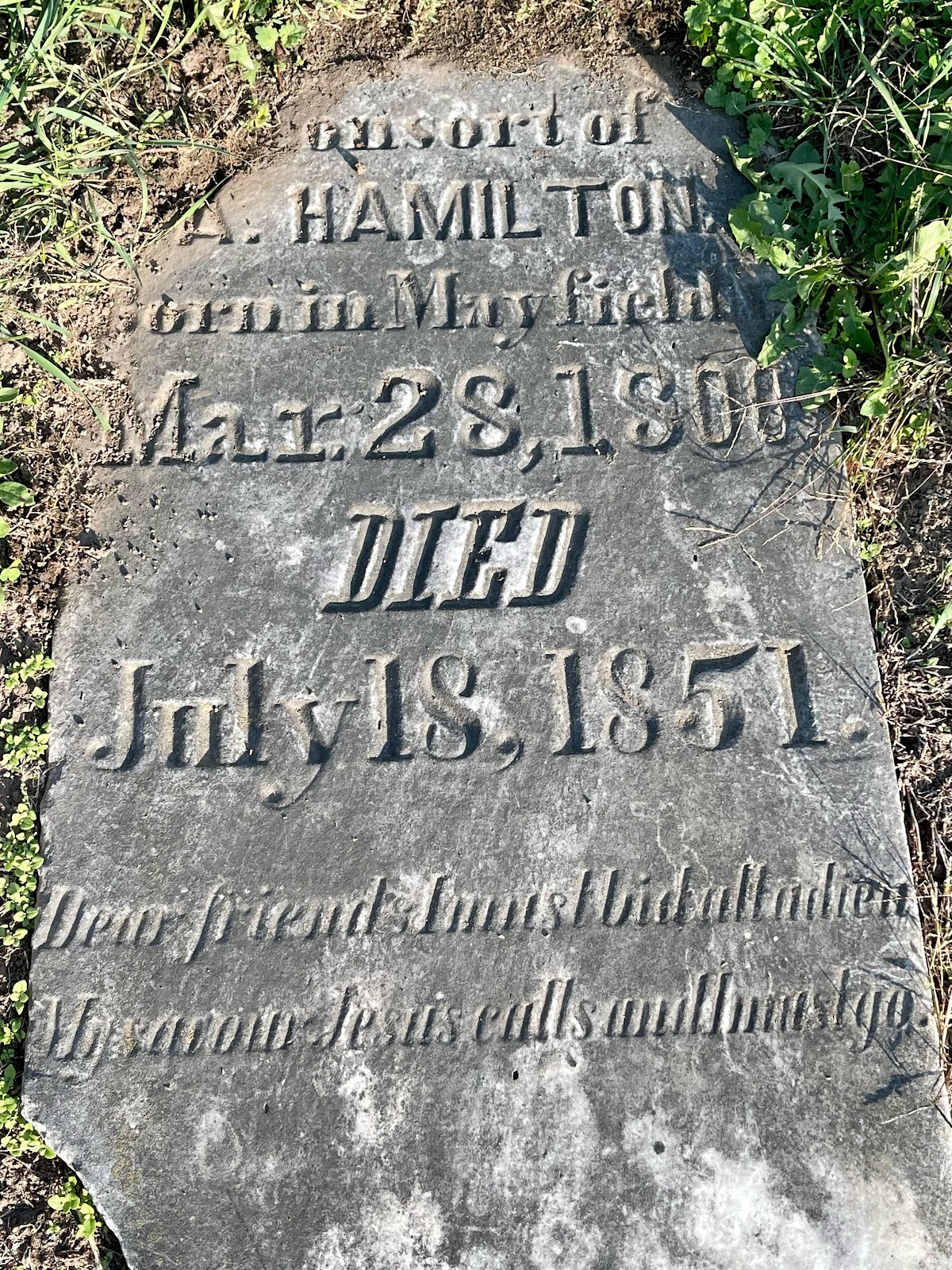 Several Hamiltons in Artois’s household died within a few hours of each other during an 1851 cholera epidemic, including his wife Atta, their son Marvin, and two sisters. 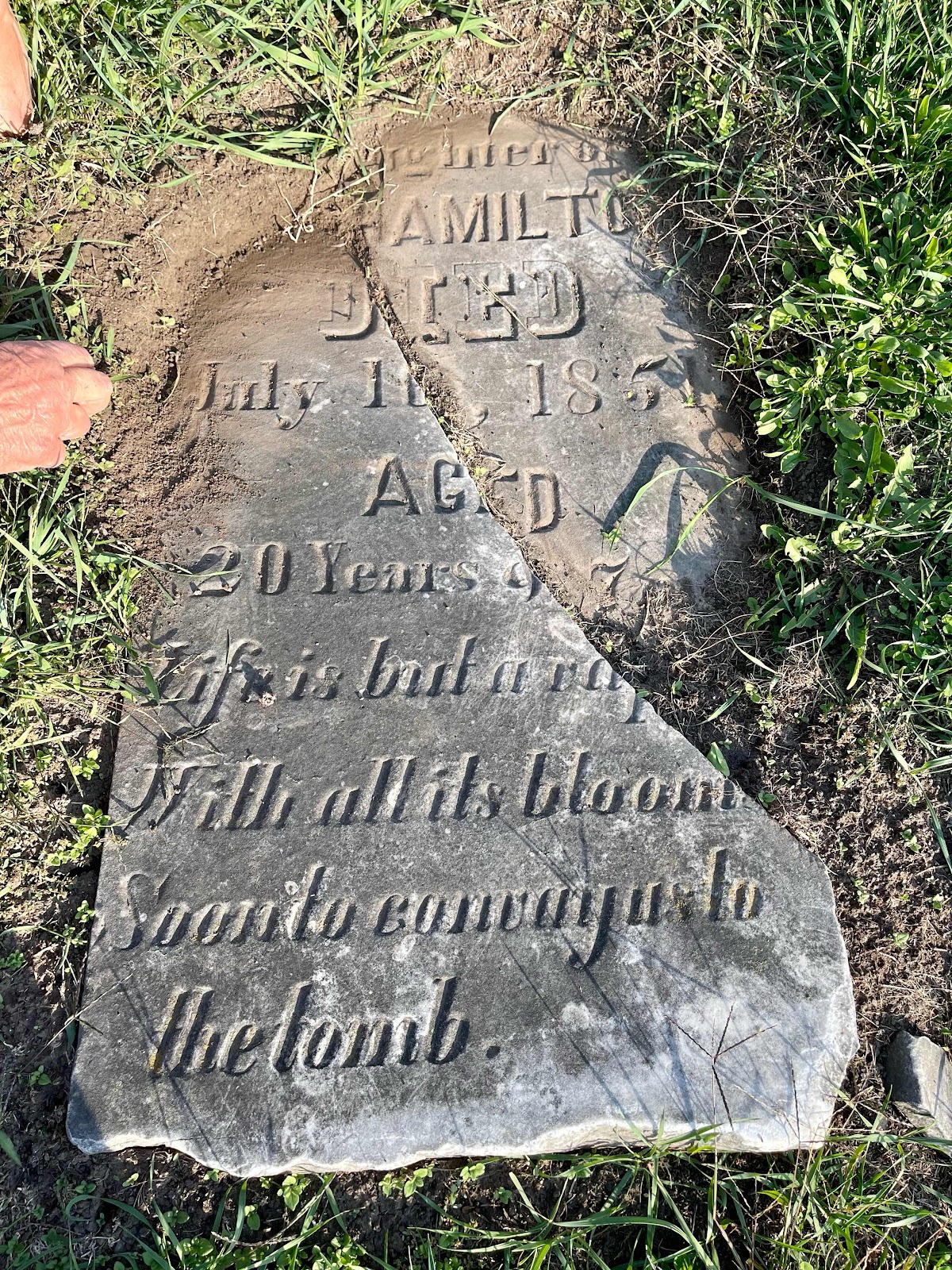 At some point (we suspect during the 40 years since our previous visit), someone has erected a rather magnificent monument that overlooks the Hamilton plot. 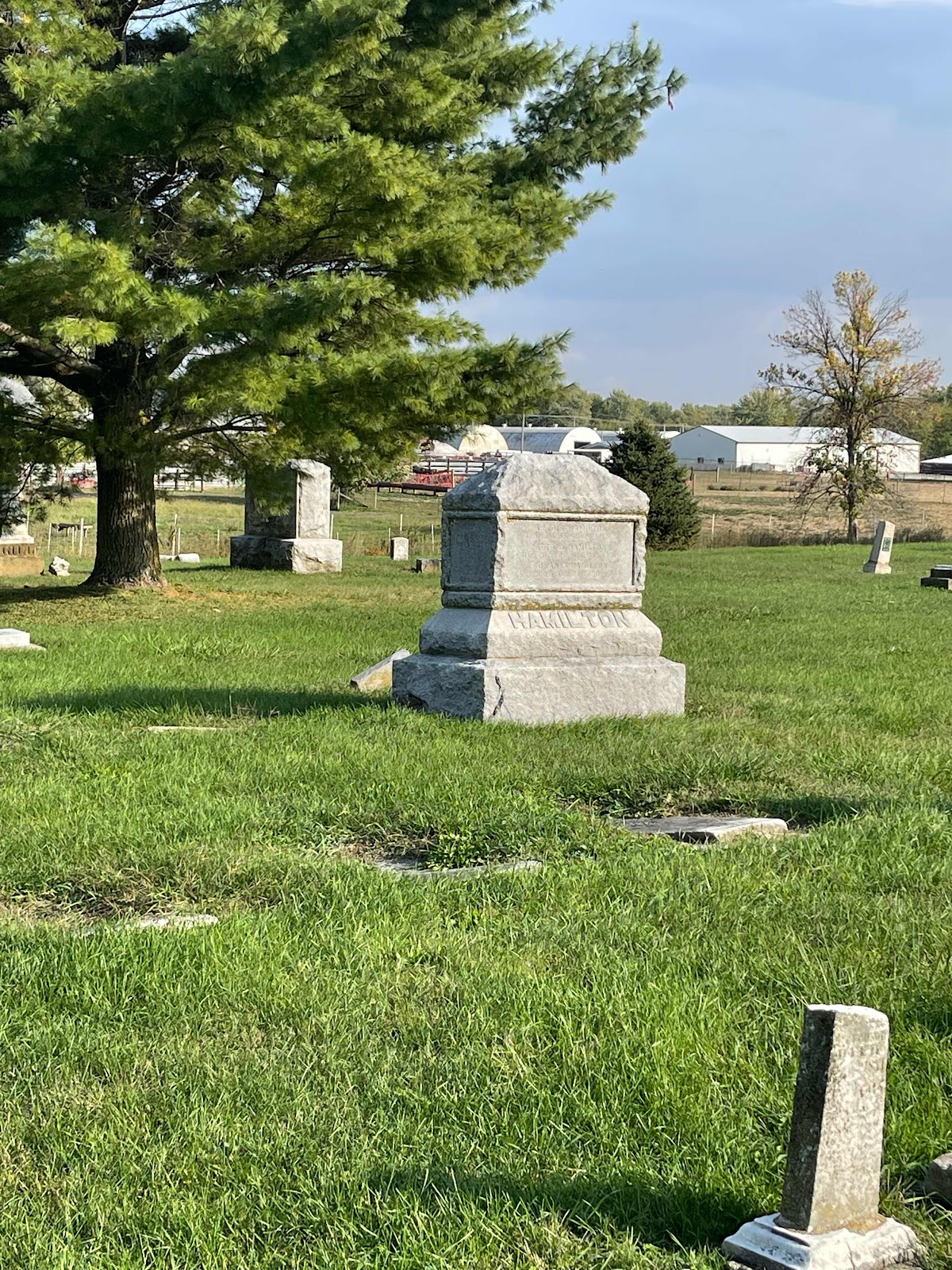 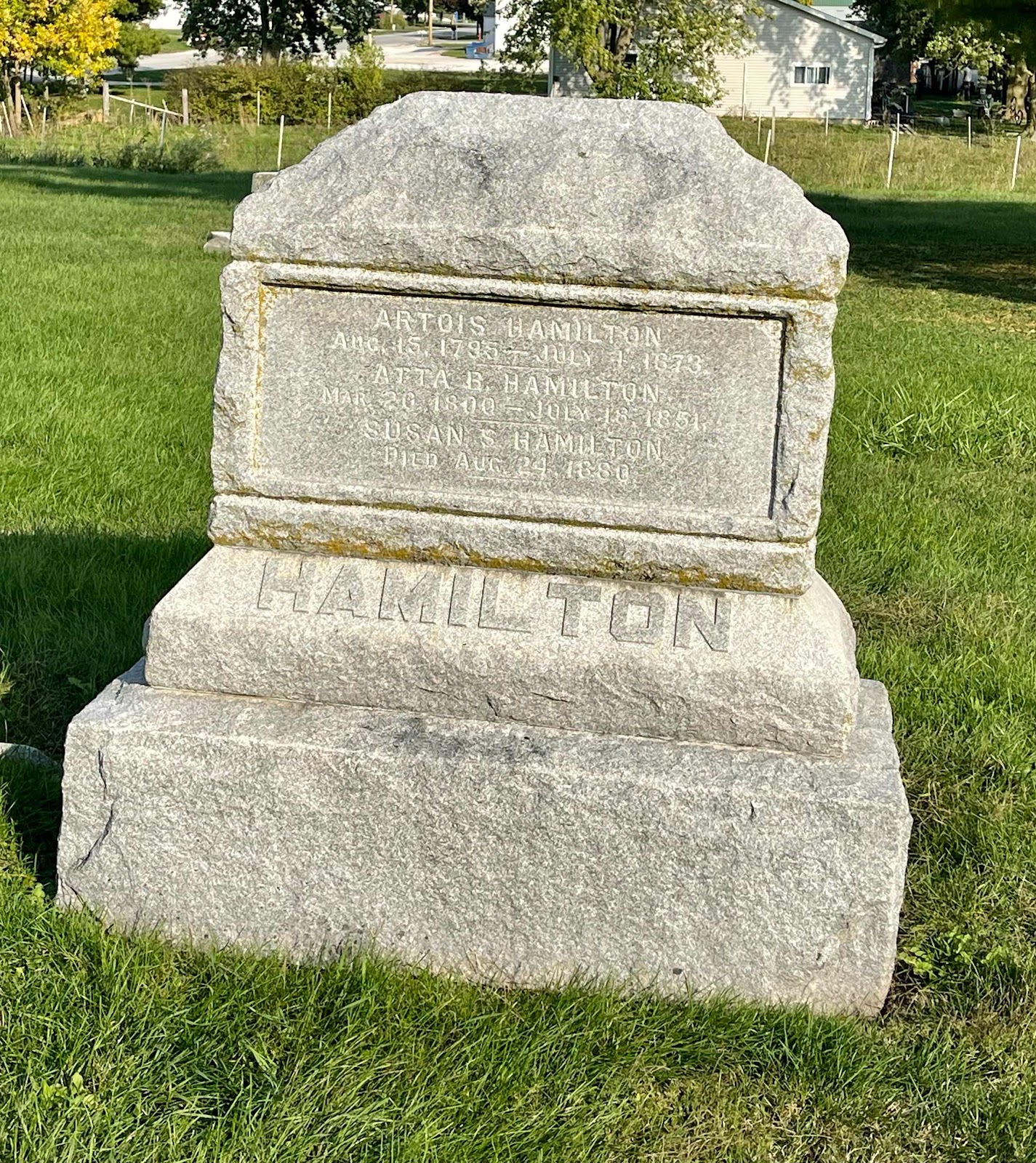 It contains the names of Artois, his first wife Atta, his second wife Susan, his father and mother, his son Marvin, and possibly one or two others that we couldn’t easily decipher. Their actual headstones and most of those throughout the cemetery have sunk into the ground in a sad state of disrepair and decay. We may be the last generation that will be able to read them.
It was a very full day. In late afternoon we crossed the Mississippi River at the village of Hamilton (named after Artois, allegedly in an effort to get him to invest in the new township) to stay in a Hampton Inn in Keokuk Iowa.
We enjoyed a decent Italian dinner before heading back to our hotel.
We’ll spend the next two days in Quincy Illinois, where Elisha “articled” in a law office after returning from the Civil War.
It continues to be a fascinating experience.
Posted by Kathy and Brian at 7:23 PM