Illinois College, founded in 1829 In Jacksonville, is a private liberal arts college affiliated with the Presbyterian Church and the United Church of Christ.
It was the second college founded in Illinois, and in 1835 became the first in the state to grant a degree. It was the alma mater of Kathy’s great-grandfather and her grandfather.We learned during our visit that several more of Kathy’s ancestors had also attended it.
On yet another beautiful day, we arrived at the beautiful campus, which enrolls somewhere around a thousand students. 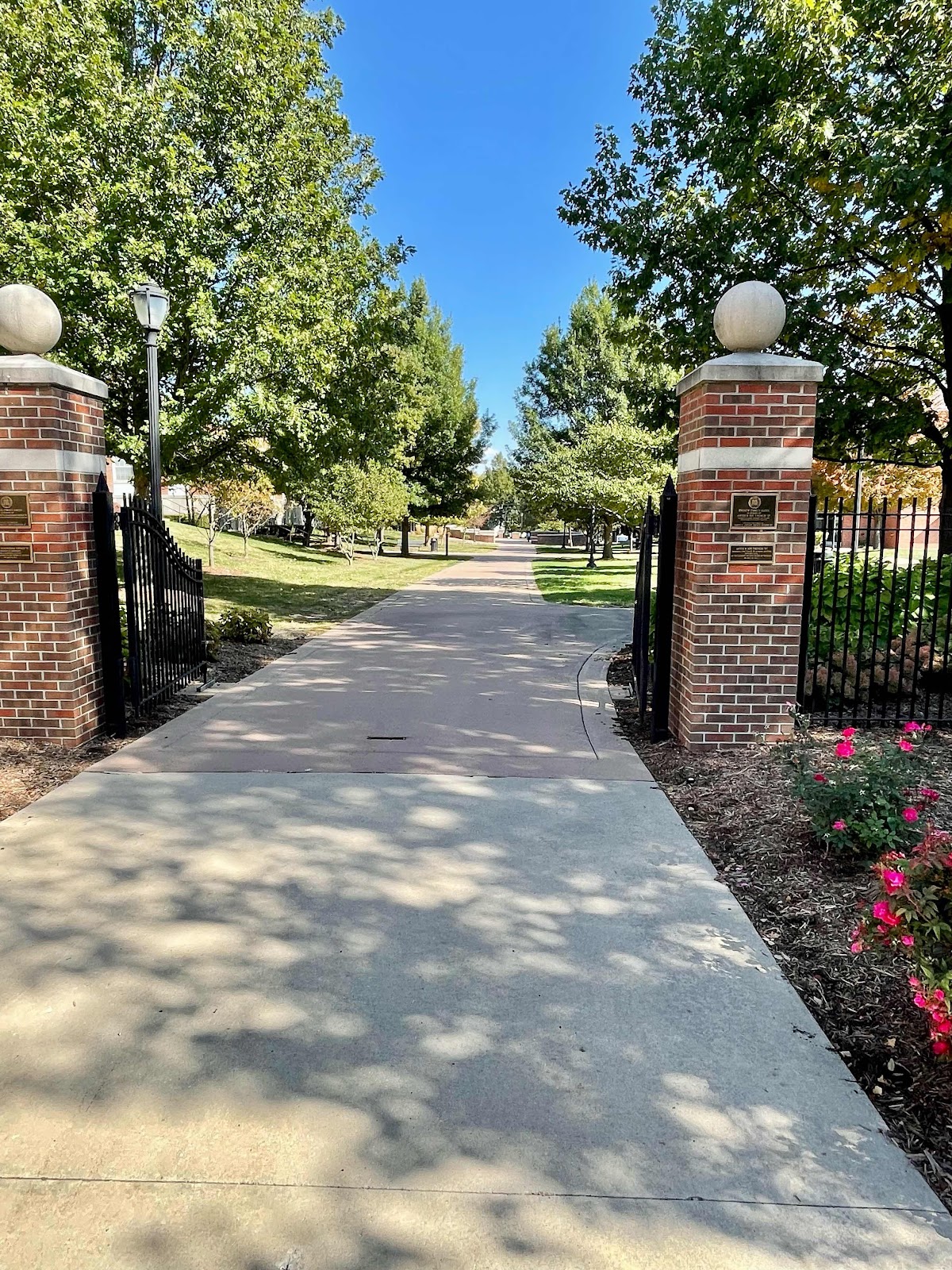 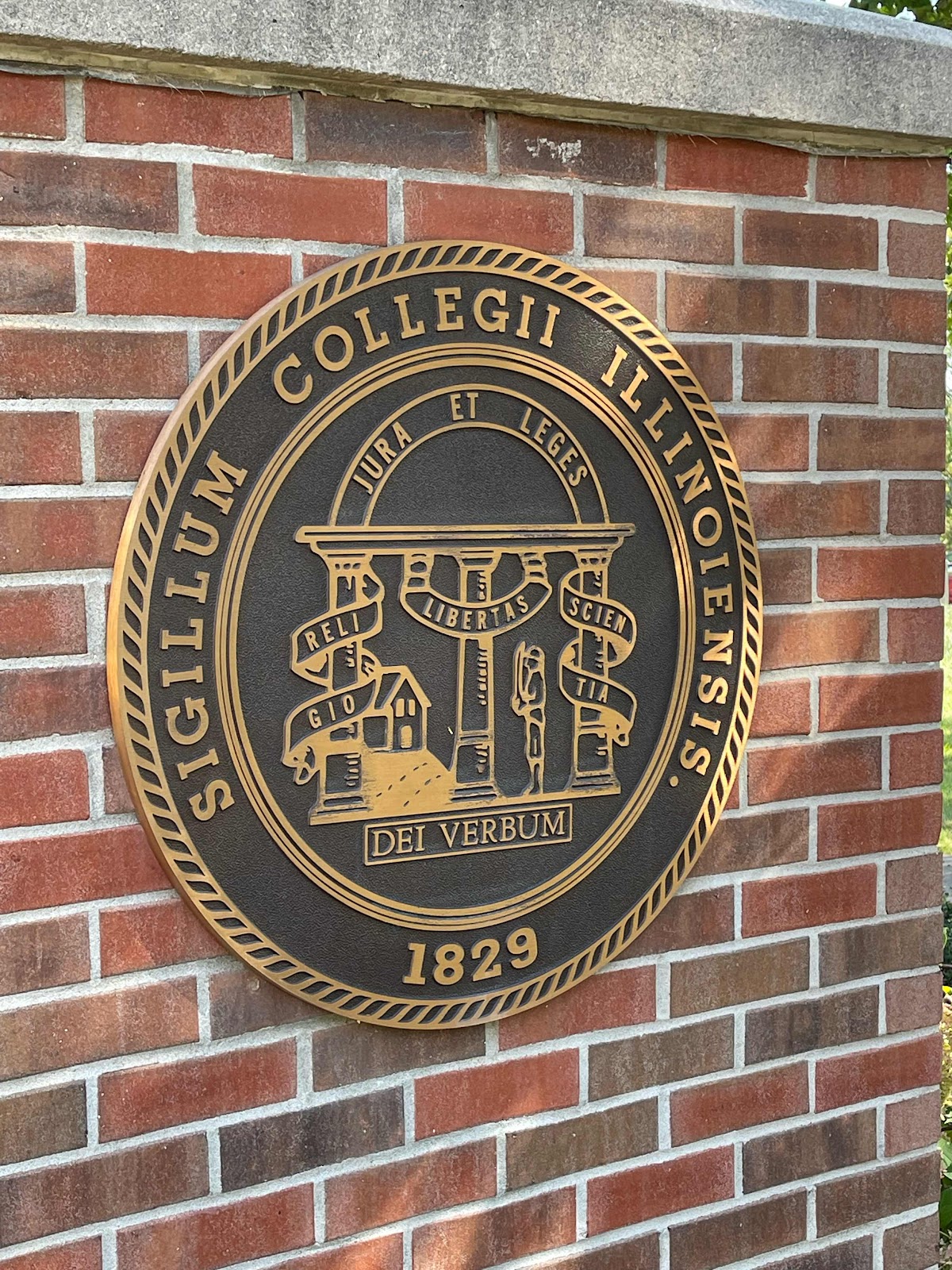 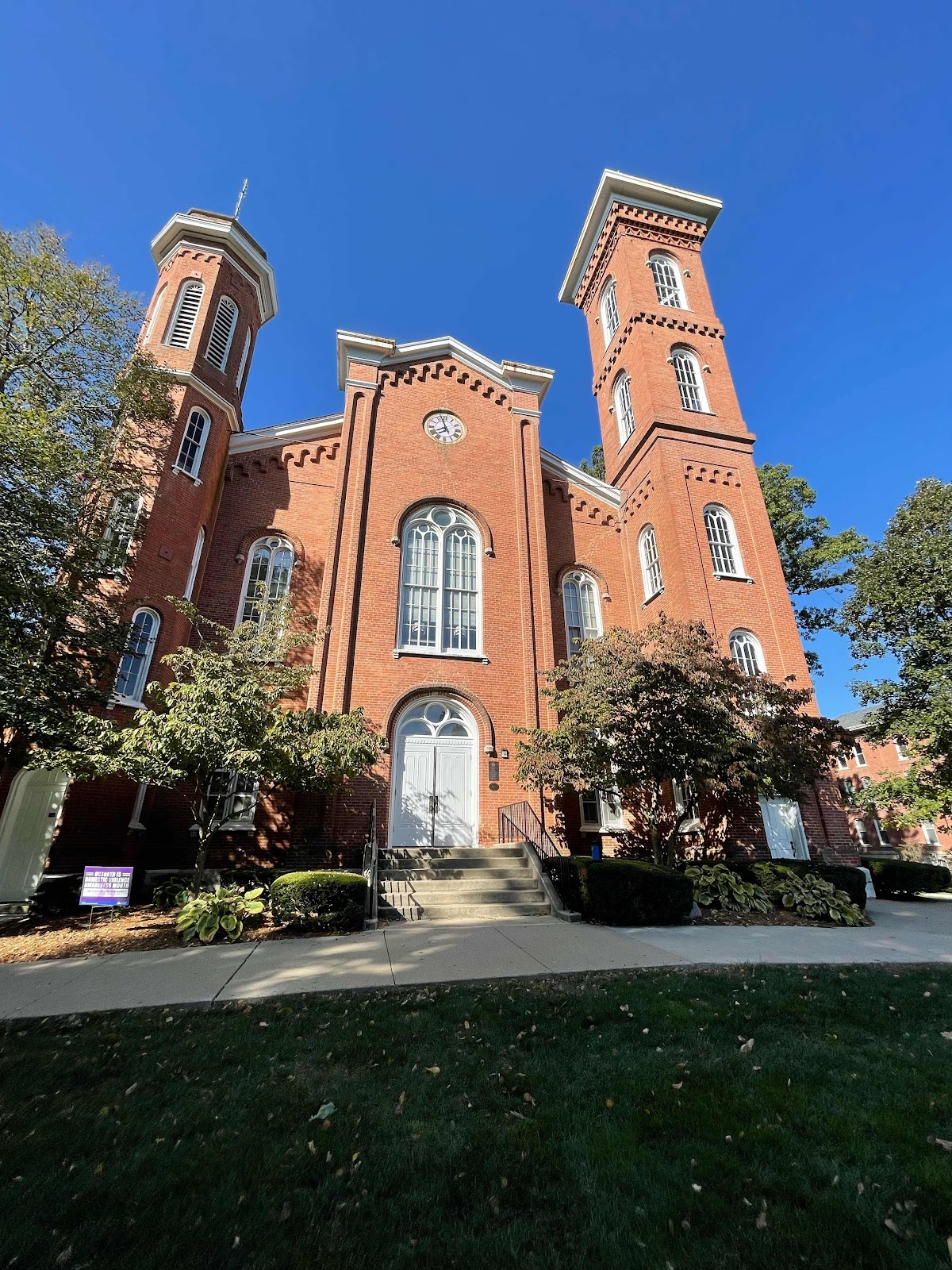 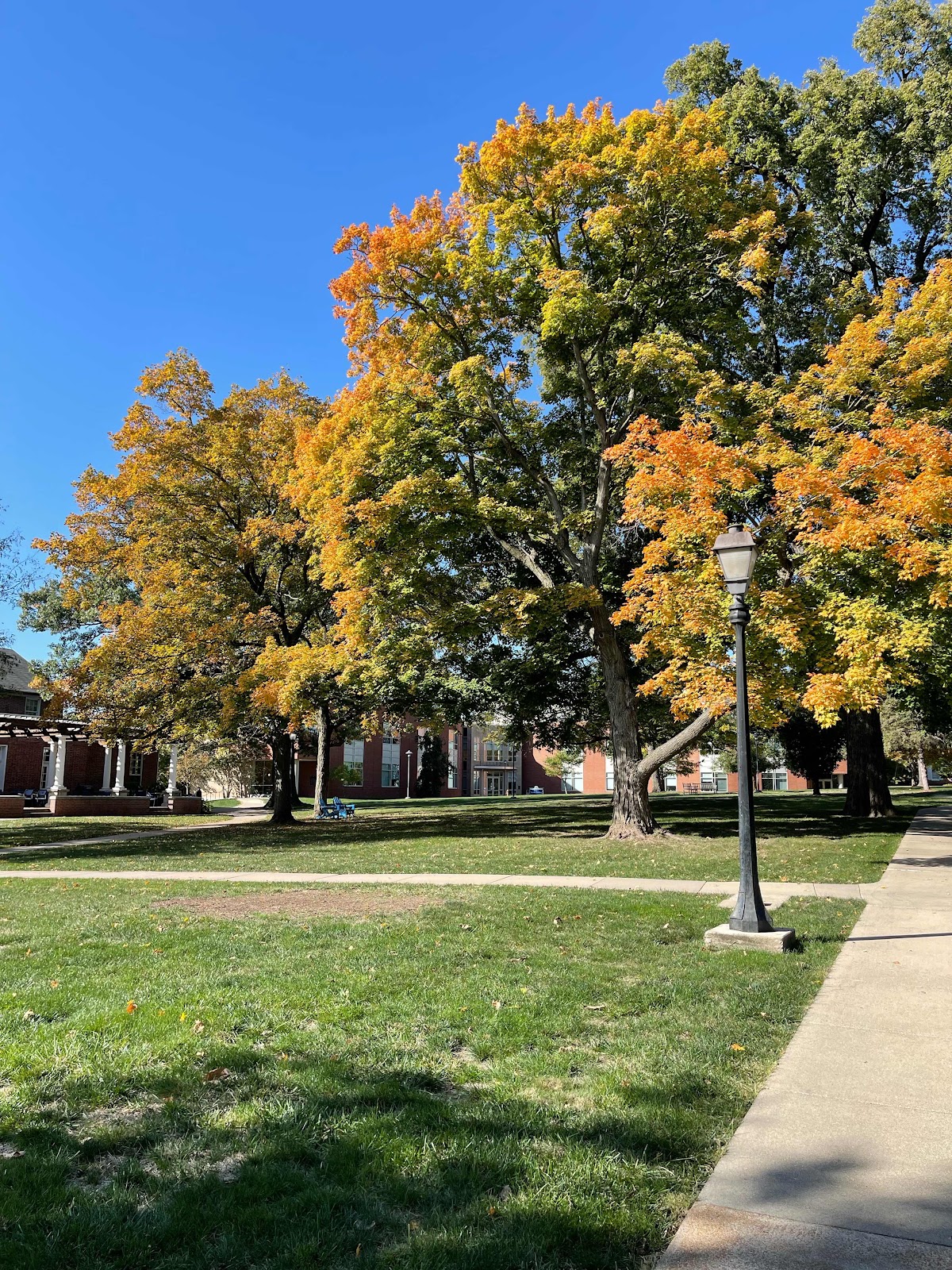 Thanks to a contact initiated by Beth Young in Quincy, the Chair of the History Department, Dr. Jenny Barker-Devine, greeted us with a variety of written materials laid out concerning Elisha Bentley Hamilton that she had discovered in the college archives. She spent three hours with us, pulling additional materials out of the college archives, and we can’t thank her enough. 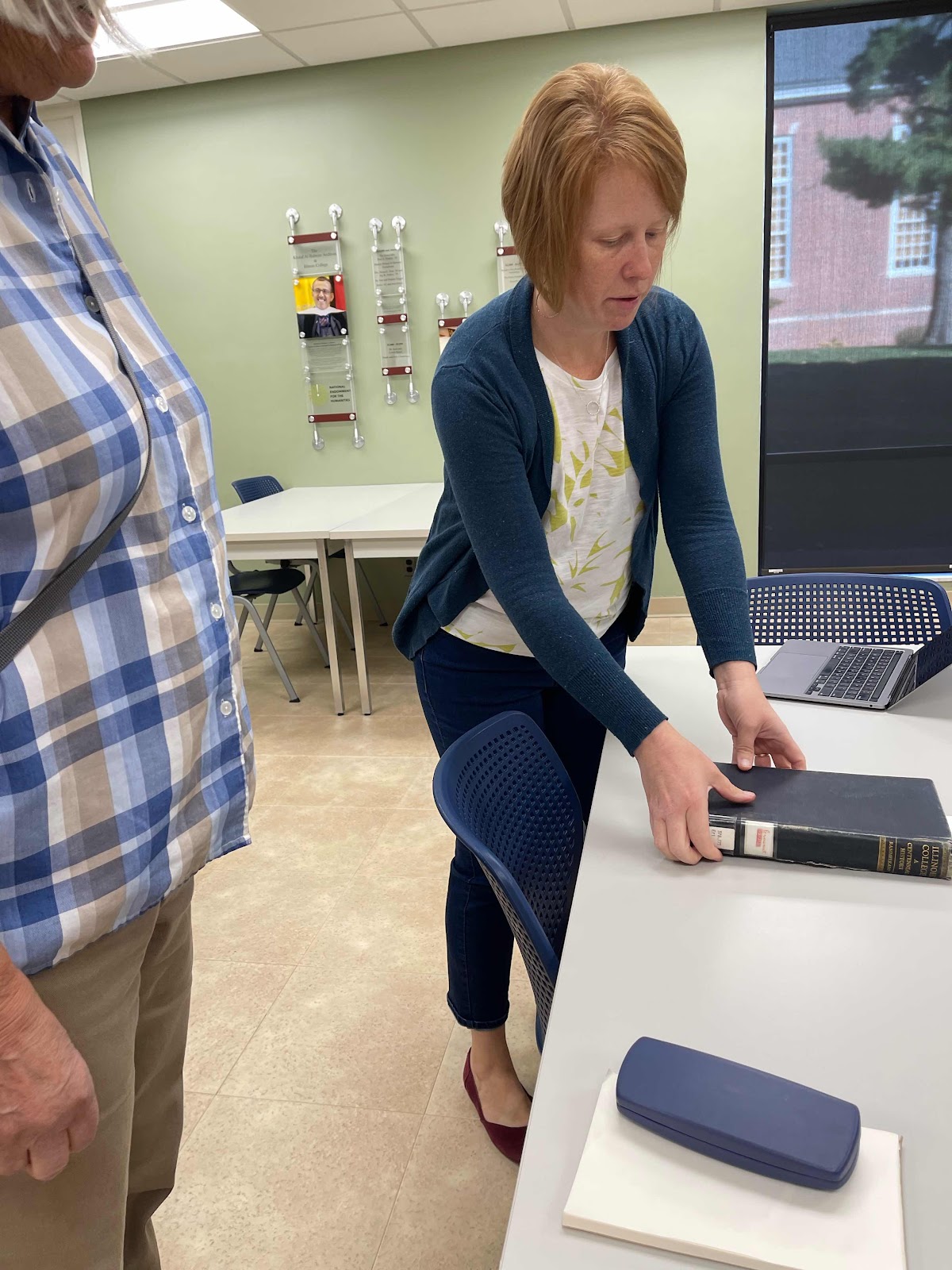 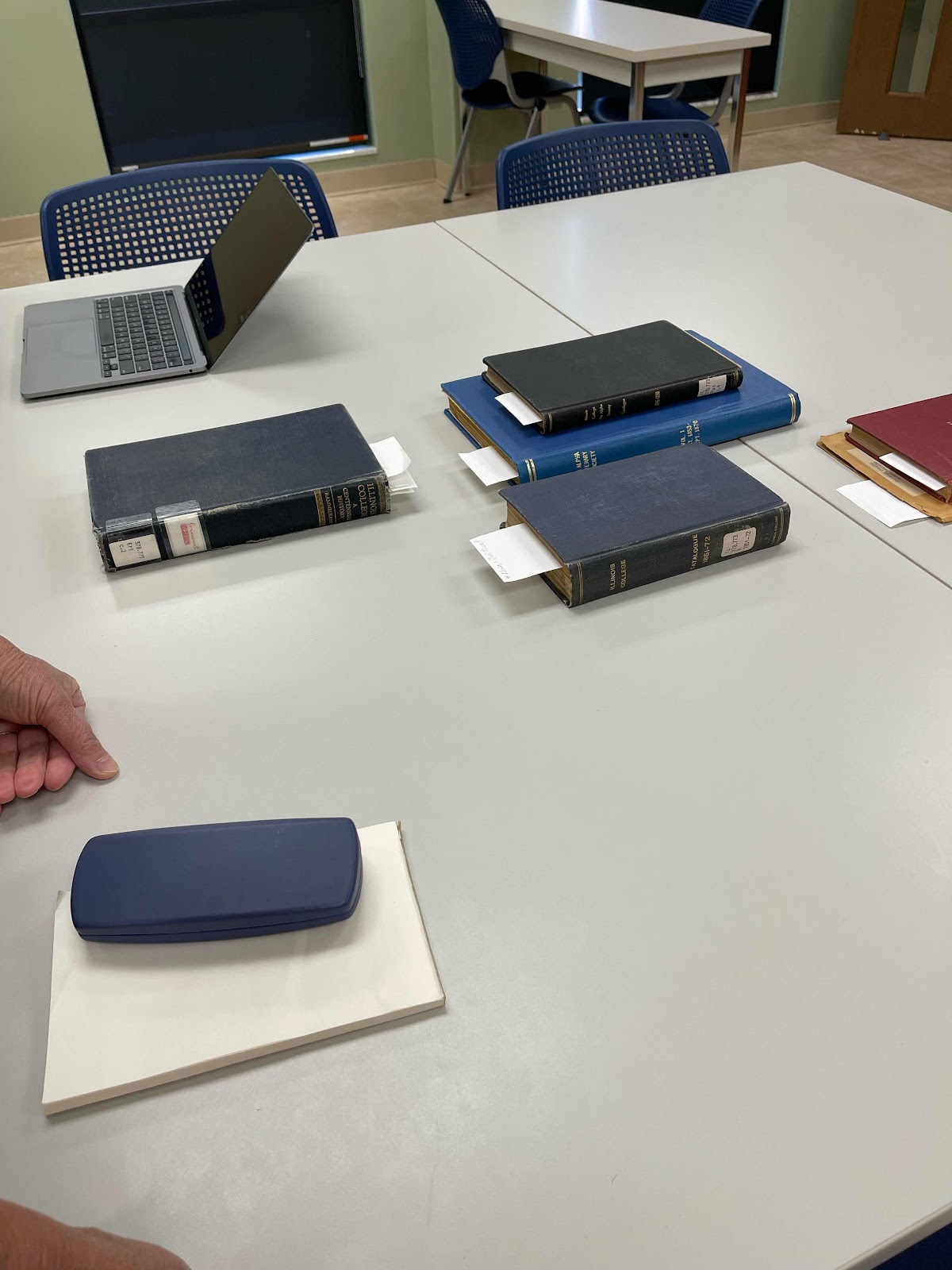 Elisha Bentley Hamilton graduated from Illinois College with a B.Sc in 1860. The college awarded him a B.A. in the 1870s, whether in recognition of his becoming a practicing lawyer, or for some other reason of which we’re unaware. 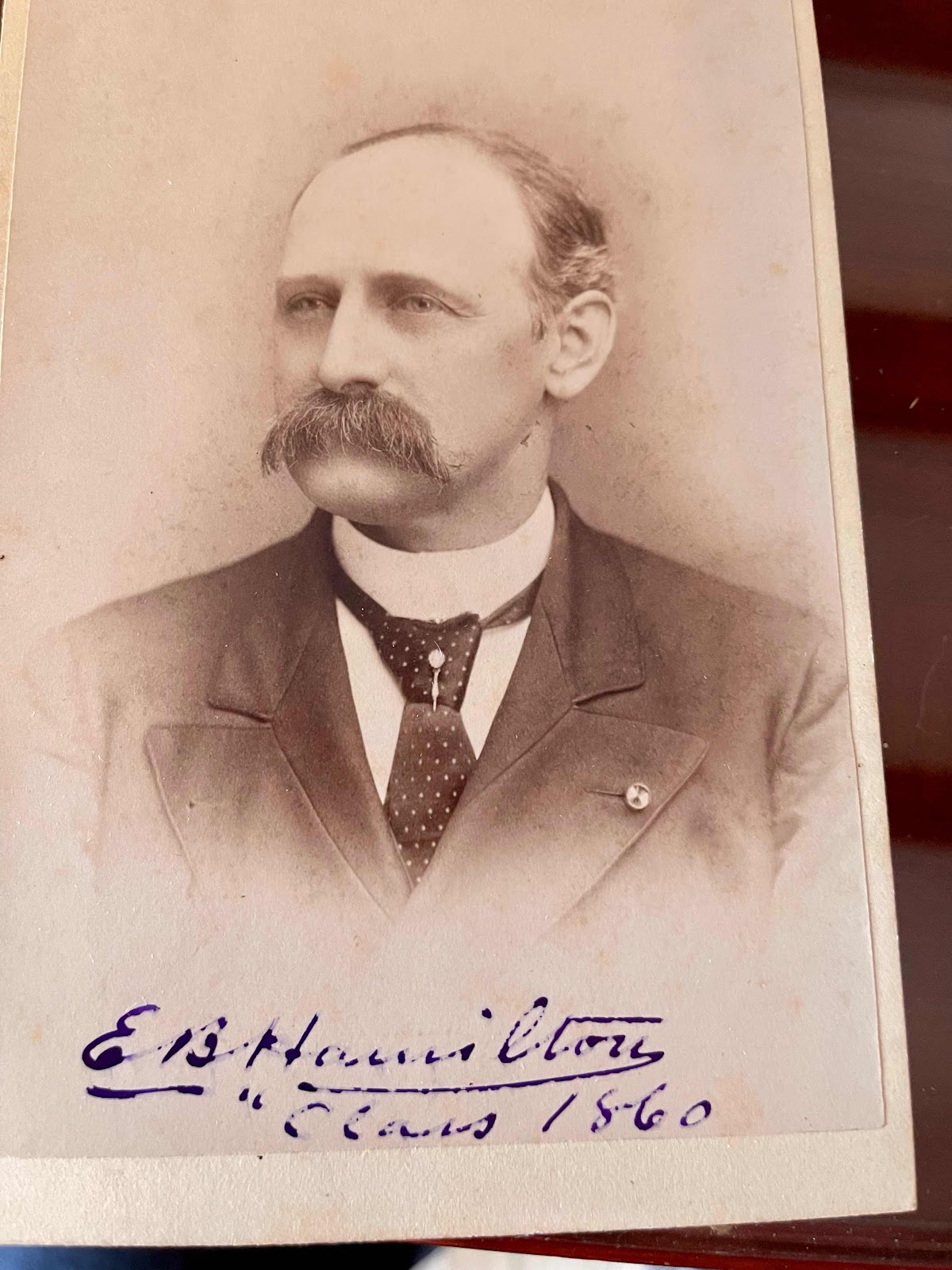 His son, Elisha Bentley Hamilton Jr., graduated from Illinois College with a B.A. in 1902… 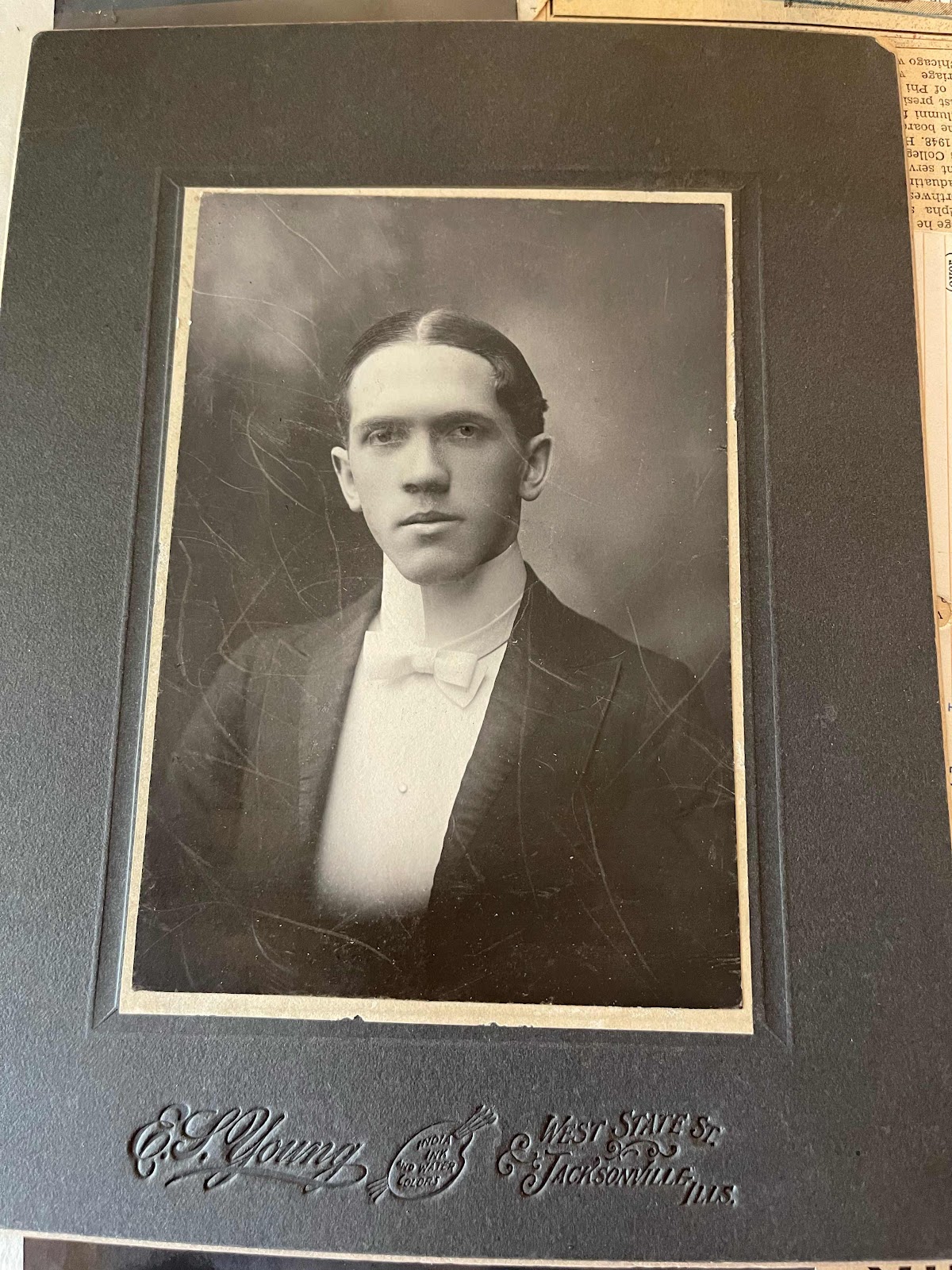 We also discovered that at least two of Elisha’s older brothers, William and Marvin (one of several Hamiltons who died in Carthage during the 1851 cholera epidemic) attended Illinois College. A faint “deceased” can be seen next to M.M. Hamilton’s name. 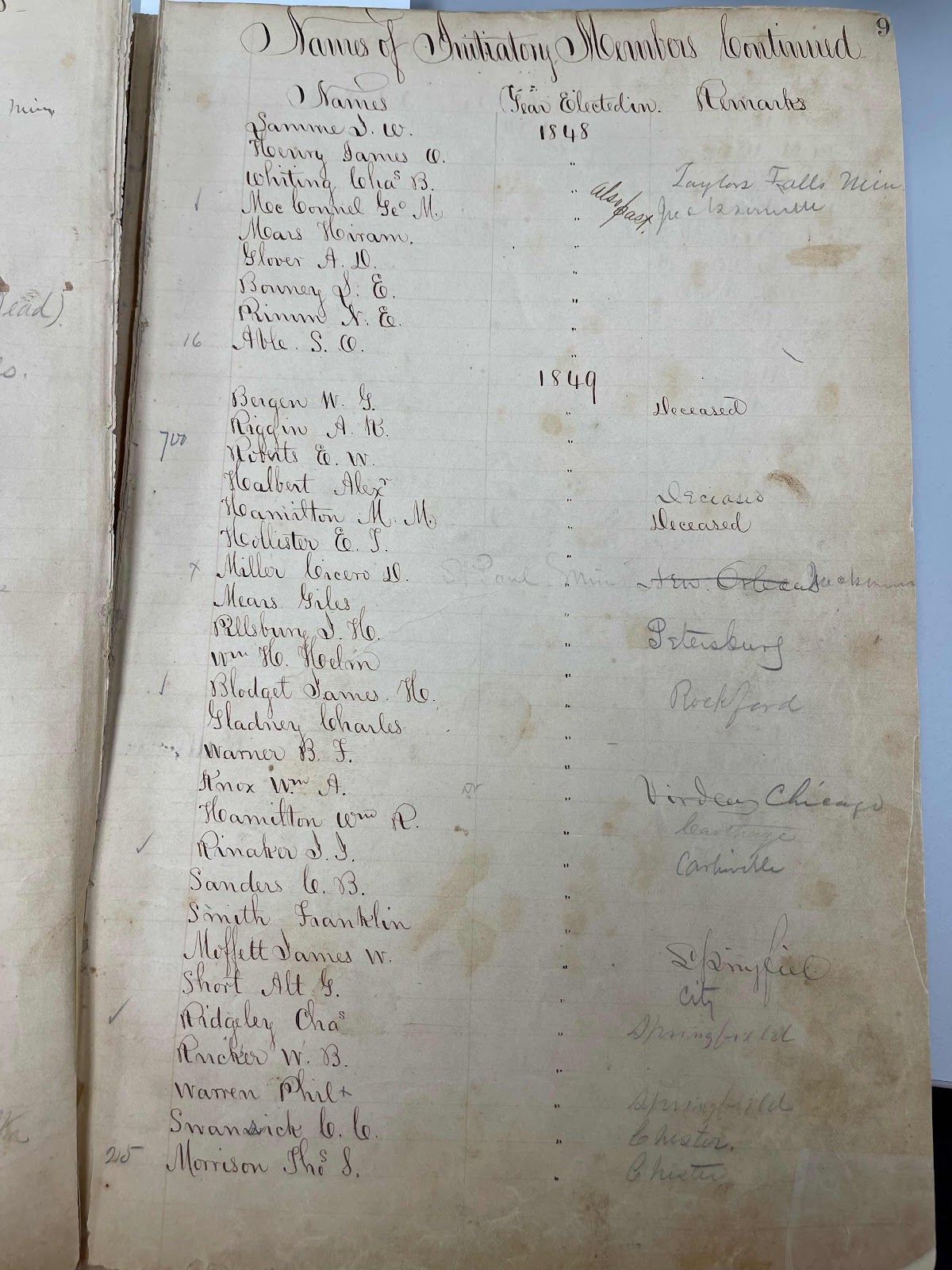 Jenny also uncovered the fact that one and possibly two of Artois’s daughters (and Elisha’s sisters) attended the Jacksonville Female Seminary, said to be the first women’s school for secondary education in Illinois.
An Amelia Hamilton from Carthage is on the rolls. A Mary Hamilton is also enrolled but her home town is listed as Atlanta. It wasn’t until some hours later as we drove toward Milwaukee that we noticed an exit for Atlanta Illinois. It seems clear that Artois the farmer and hotel keeper wanted his sons and daughters to be educated, and took steps to see that they were. 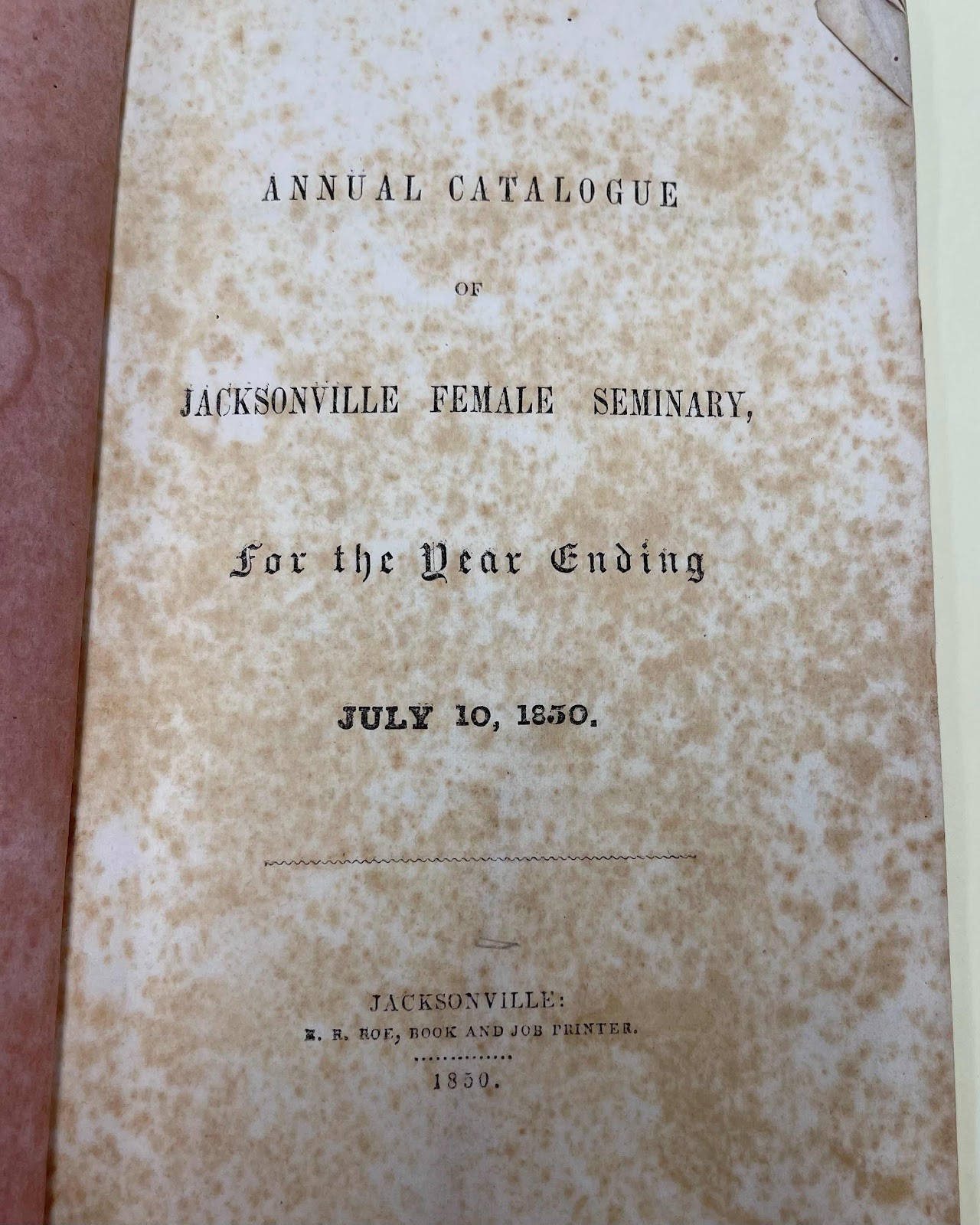 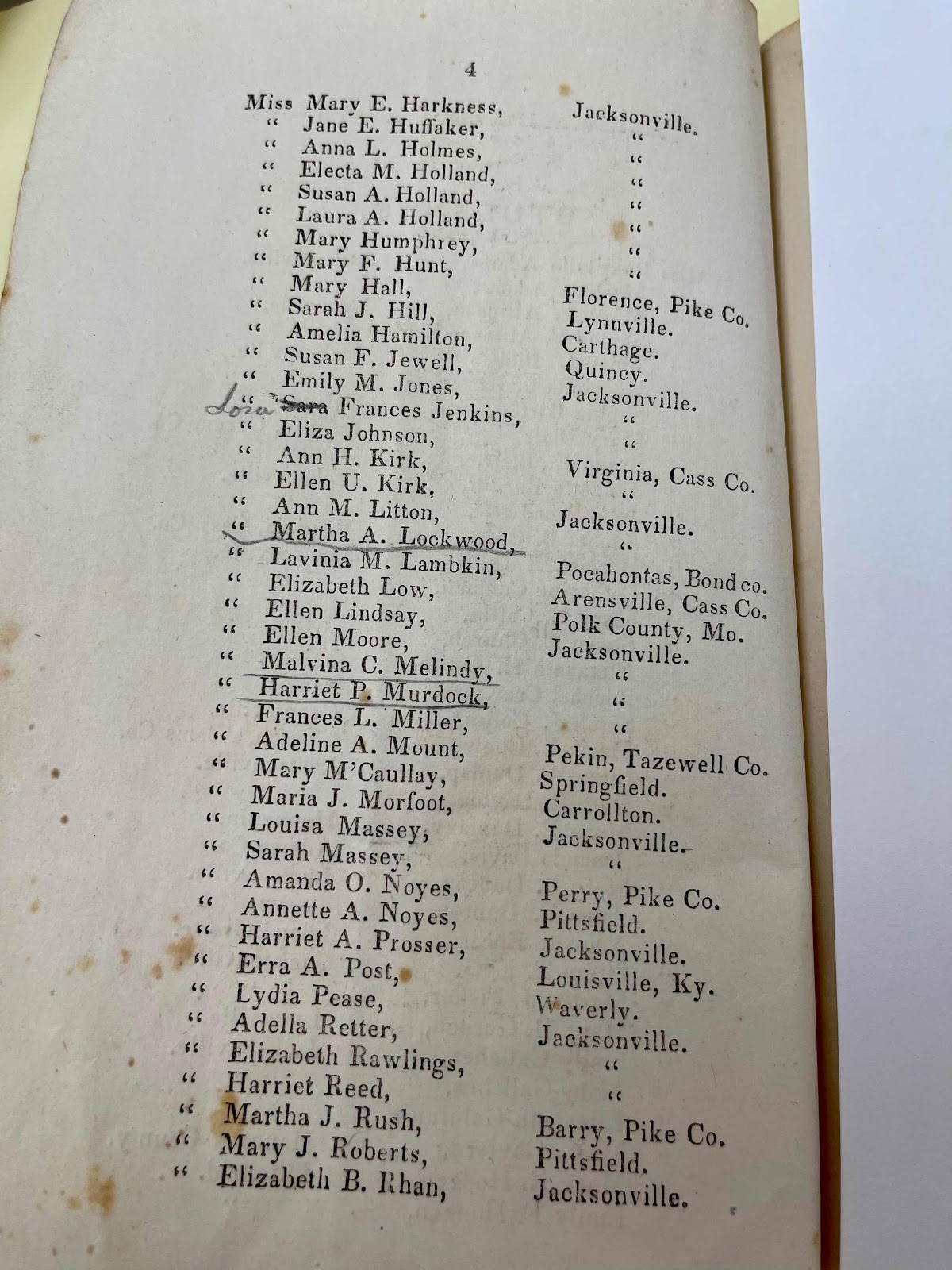 Once we were finished in the archives, Jenny walked us over to the Illinois College Alumni Association, housed in a charming cottage that had us looking for Smurfs. 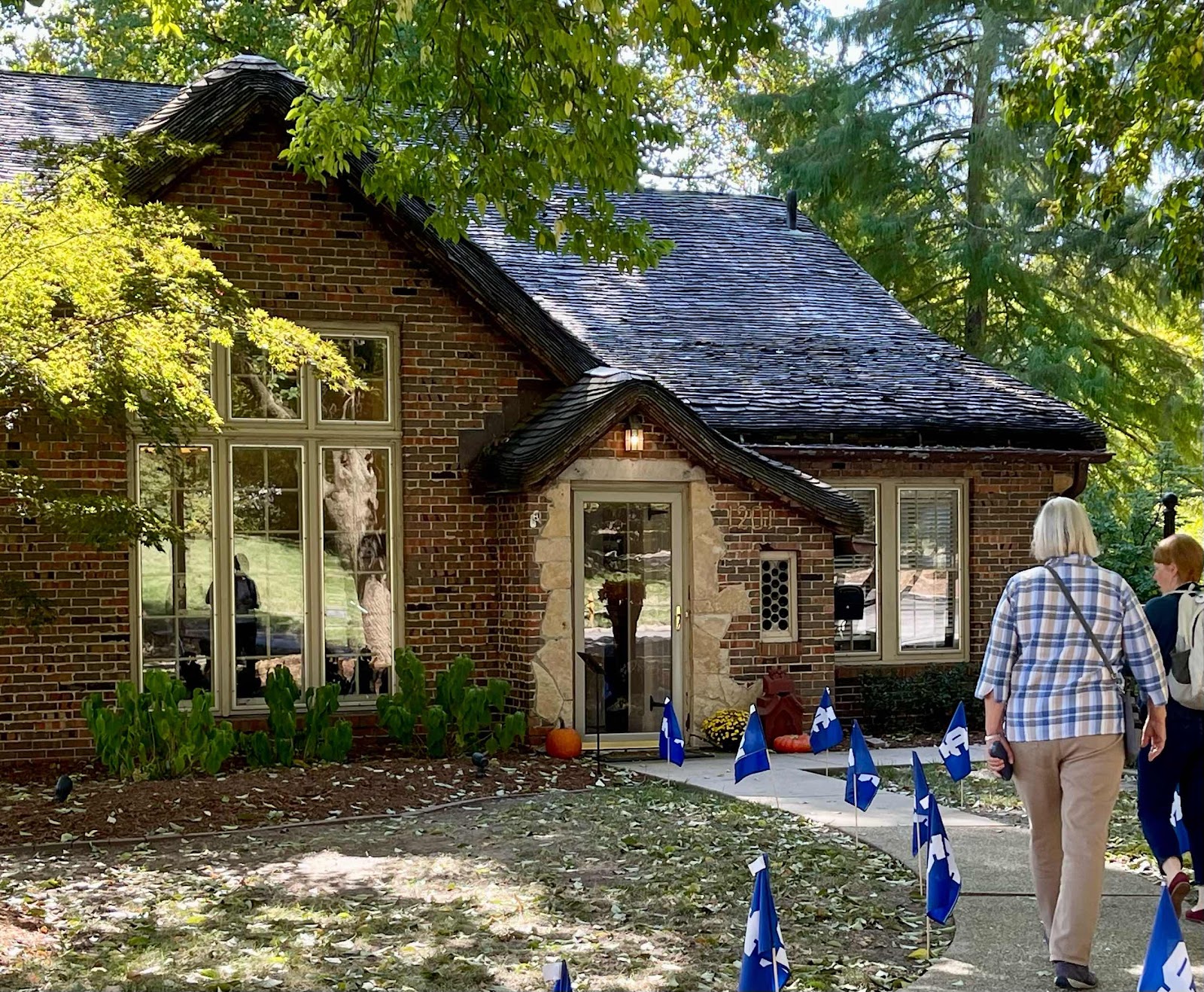 Waiting for us there were two file folders, one for each Elisha. They proved to be treasure troves, containing letters handwritten by Elisha Senior and typed by Elisha Junior, press clippings, and other bits of information, collected by this small private college to keep track of its alumni..
One example is a 1936 letter Elisha Junior wrote. He was a trustee and is enclosing a donation to a memorial fund for the college’s sixth President, Charles K. Remmelcamp. Toward the end of the letter to the former president’s widow, Elisha makes reference to his son, a graduating football star at Peoria High School and also “a very conscientious student” who has “made good grades all the way through.” 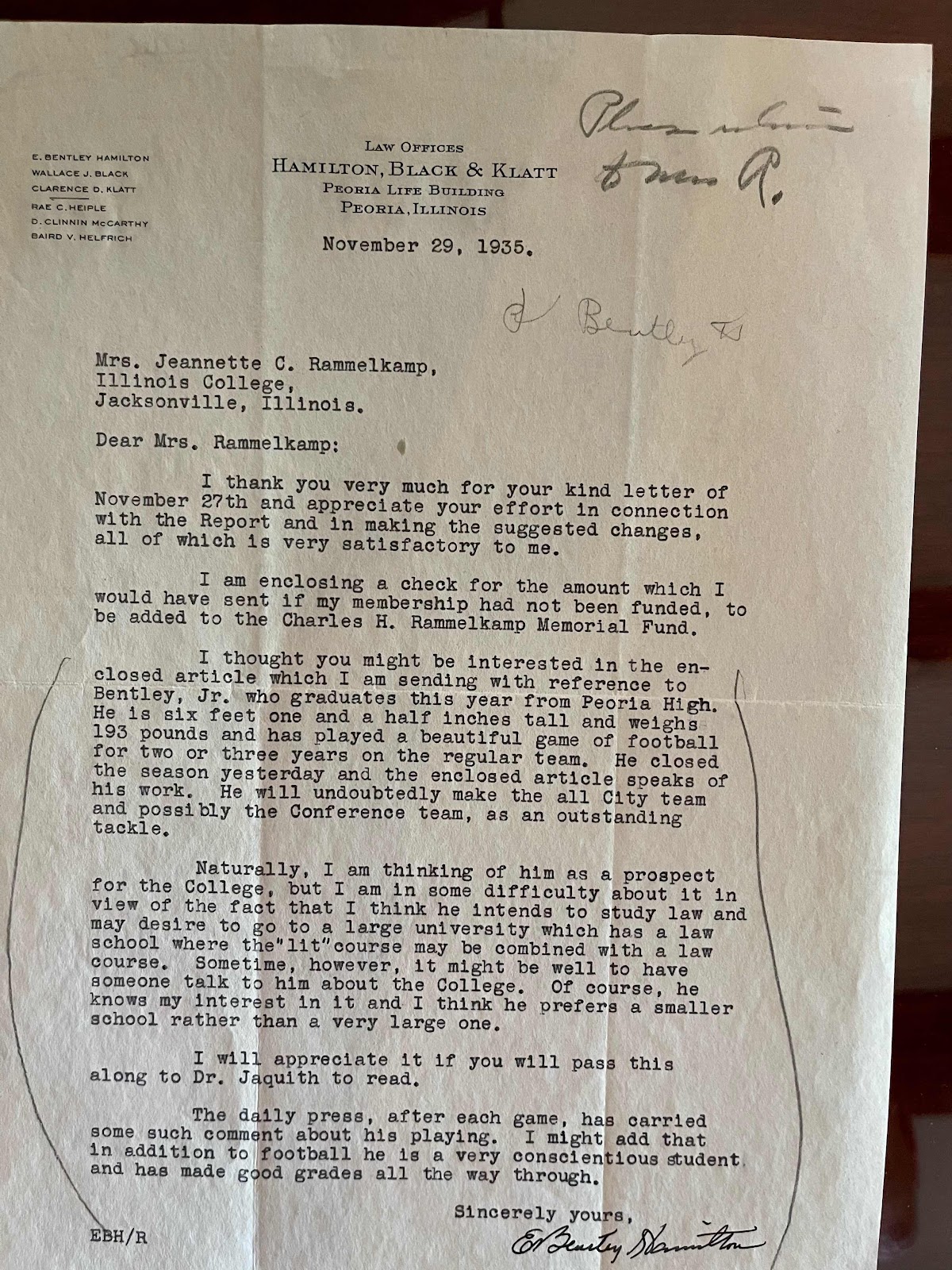 The clipping he enclosed of the high school football game is still in the file. Under the heading “Hamilton Is Standout,” one can read that “Most lustrous of the brilliant Central linemen was Bentley Hamilton who figured in an astonishing number of plays.”
The proud father was hoping his son, Elisha Bentley Hamilton III might be a prospect for IC. As things turned out, Kathy’s father attended Colgate instead.
The time passed quickly, and we eventually had to tear ourselves away and start our four-hour drive to Milwaukee, taking with us more information about Kathy’s ancestors, and fond memories of the midwestern hospitality and tangible assistance we’ve enjoyed during our stays in Carthage, Quincy, and Jacksonville.
Posted by Kathy and Brian at 8:53 PM