Kathy is a great-granddaughter of General Elisha Bentley Hamilton, and thanks to the efforts of Beth Young and others involved in the Historical Society of Quincy & Adams County, we learned more today about one of Kathy’s ancestors.
After driving over from Keokuk Iowa via Missouri, we crossed the Mississippi River about 45 minutes later and found ourselves in Quincy Illinois.
Elisha Bentley Hamilton was raised in Carthage, and moved to Quincy after serving in the Civil War 1862-1865. Having completed his B.A. at Illinois College in 1860, he studied law (“reading law”) in the law office of Warren and Wheat, He went on to a distinguished career as a lawyer and also eventually as a brigadier general in the Illinois National Guard. 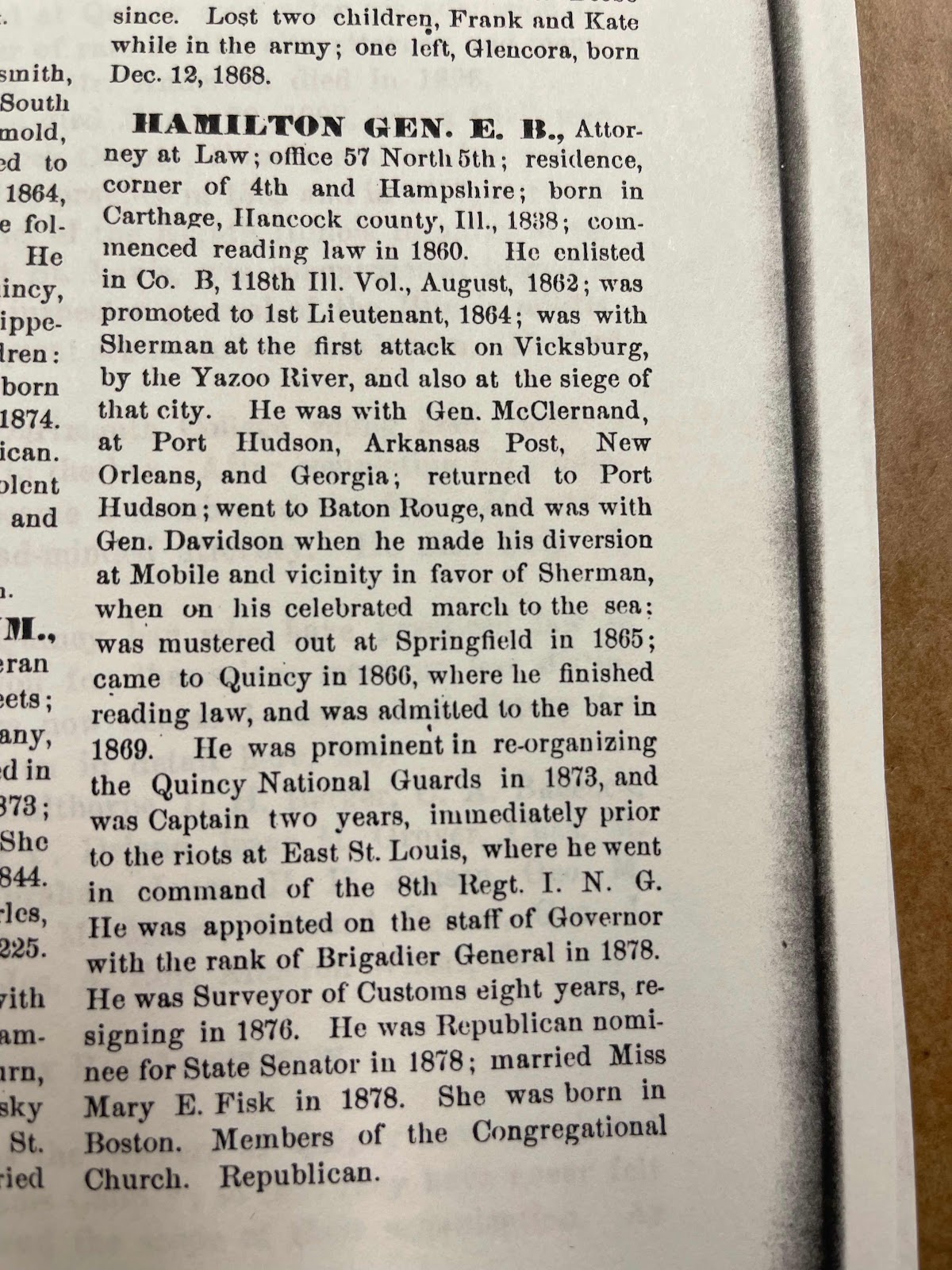 We met Beth Young at the Governor John Wood Mansion. Wood was a founder of Quincy and its first settler and became the 12th governor of Illinois.
We were fascinated by the guided tour that Rich Keppner, another extremely knowledgeable volunteer, provided. We were also very pleased to meet the HSQAC Executive Director Rob Mellon during our visit. 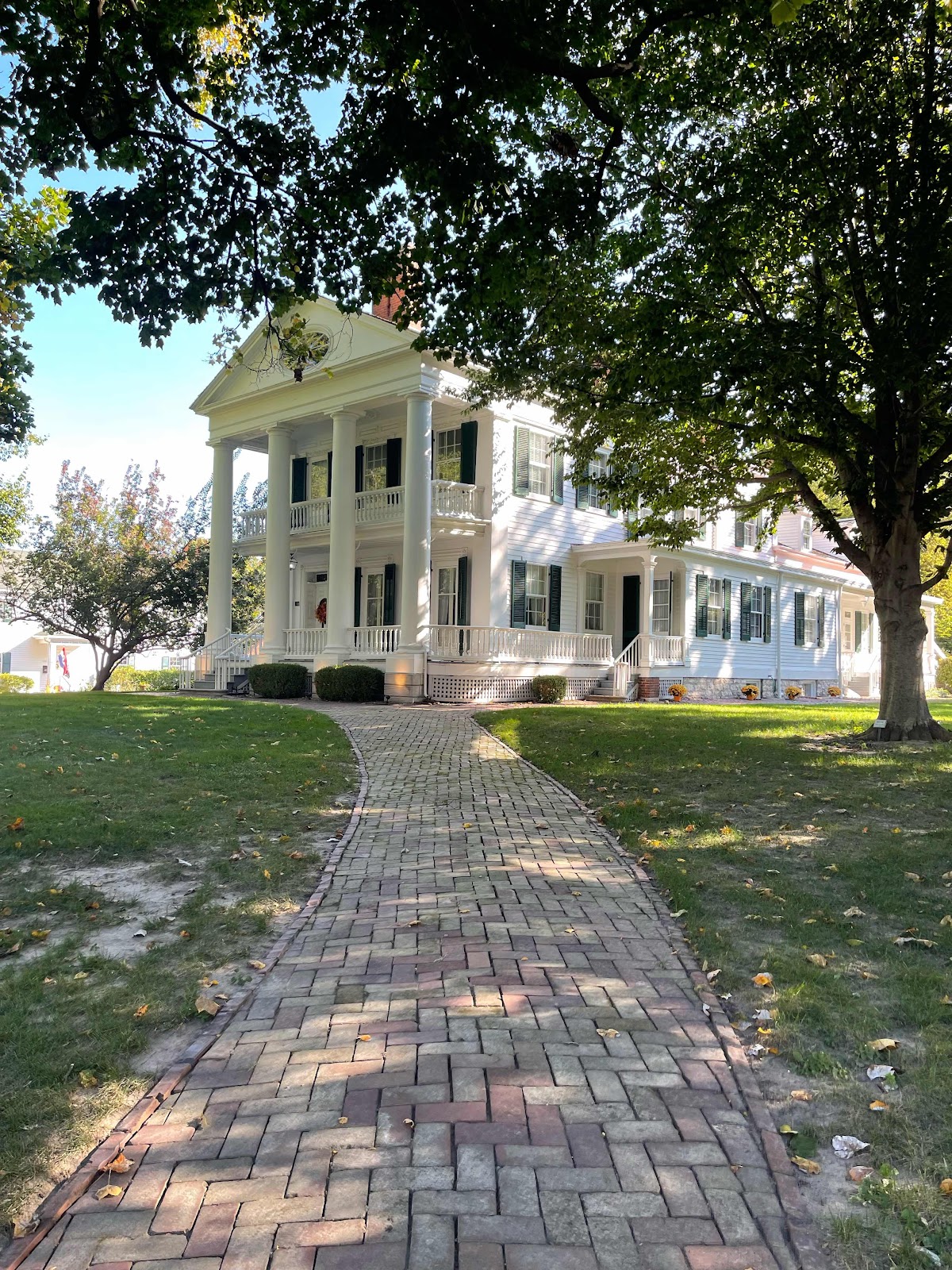 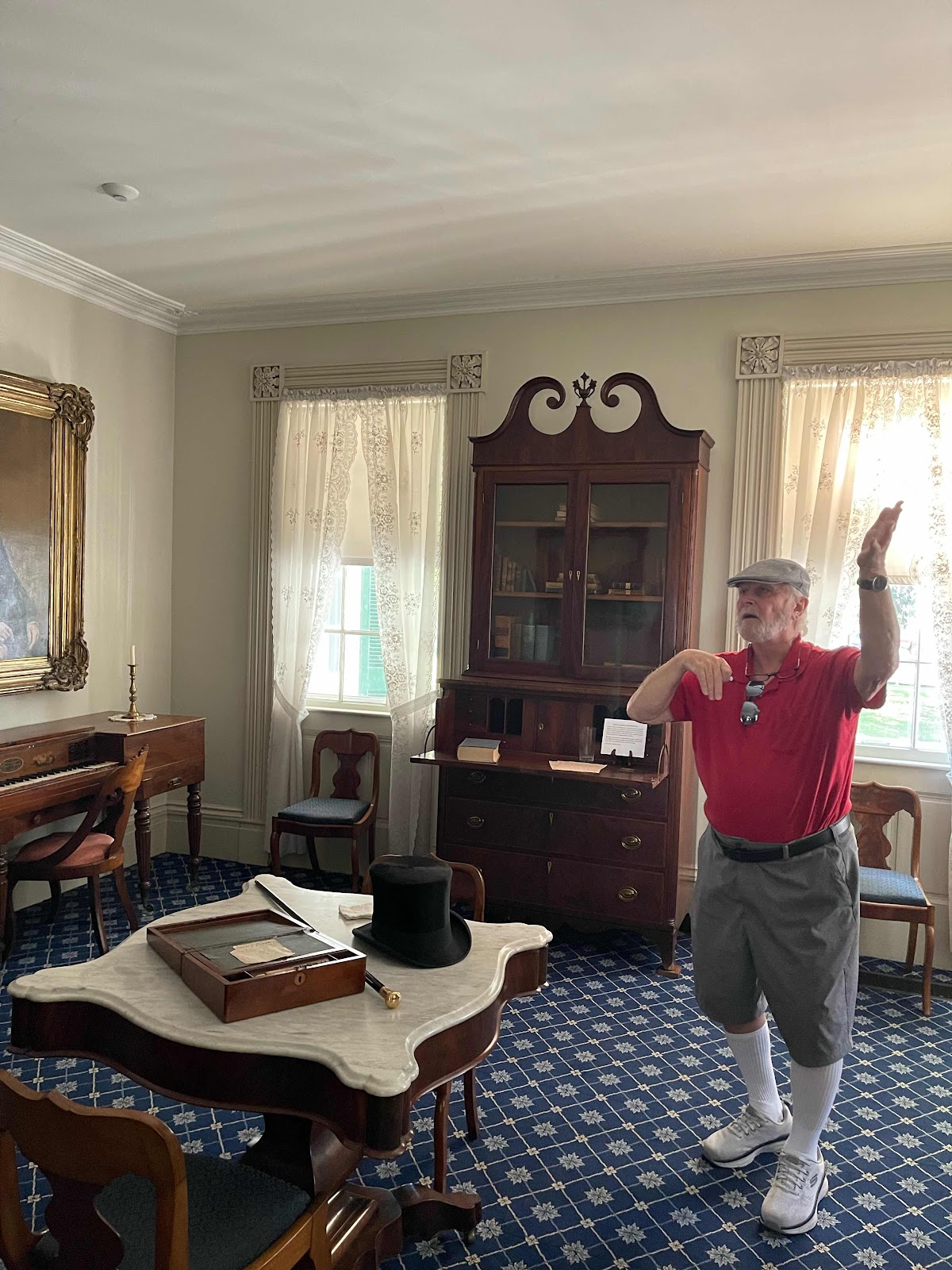 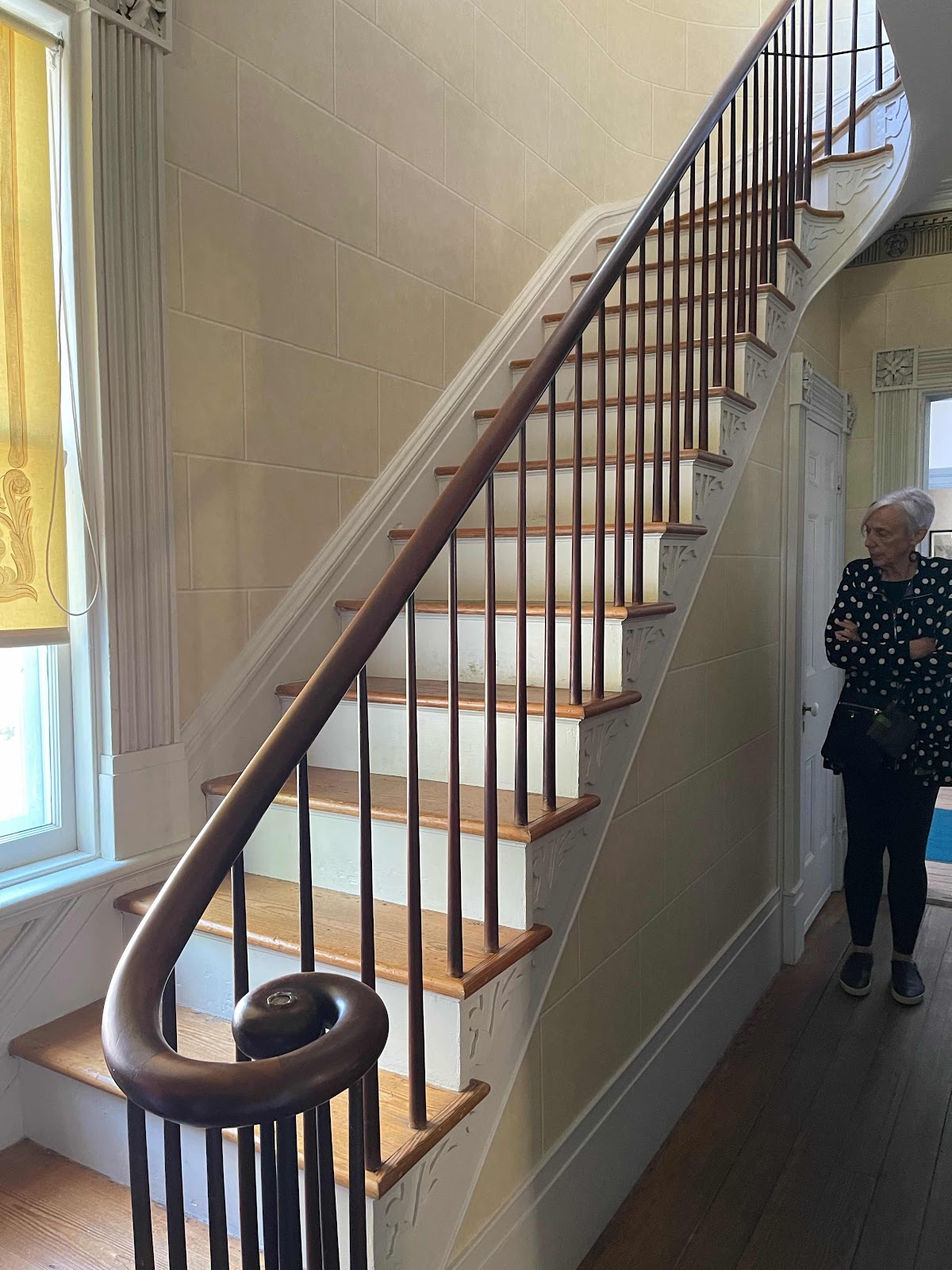 Who would have guessed baby walkers were a feature of the 19th century? 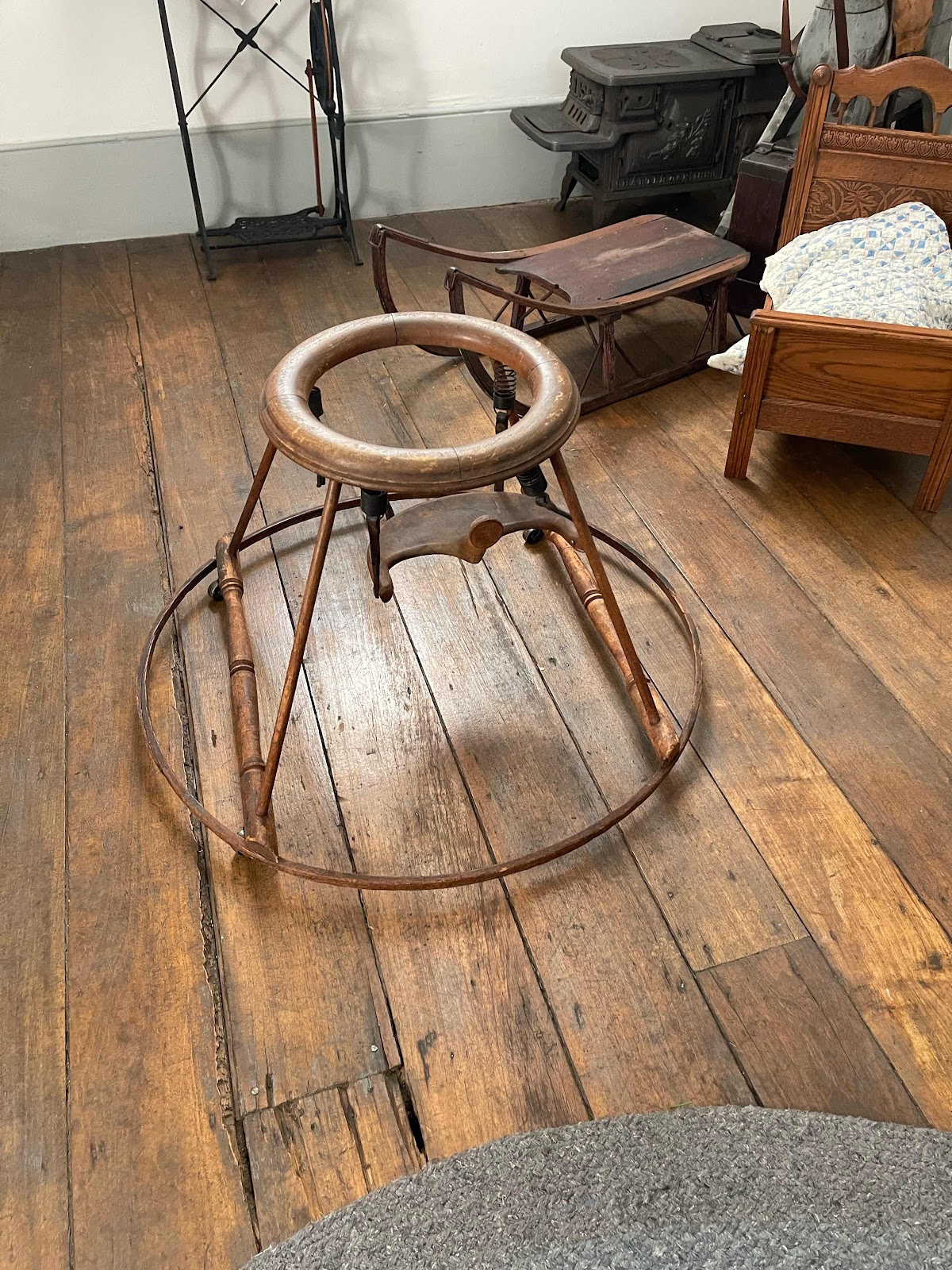 Later we moved to the rooms containing the society’s archives, and were presented with a treasure trove of materials to examine by Jeanne, one of the chief volunteer archivists.
Elisha Bentley Hamilton was one of the founders of the very society that was hosting us, and we were able to gaze at a large framed photo of him. 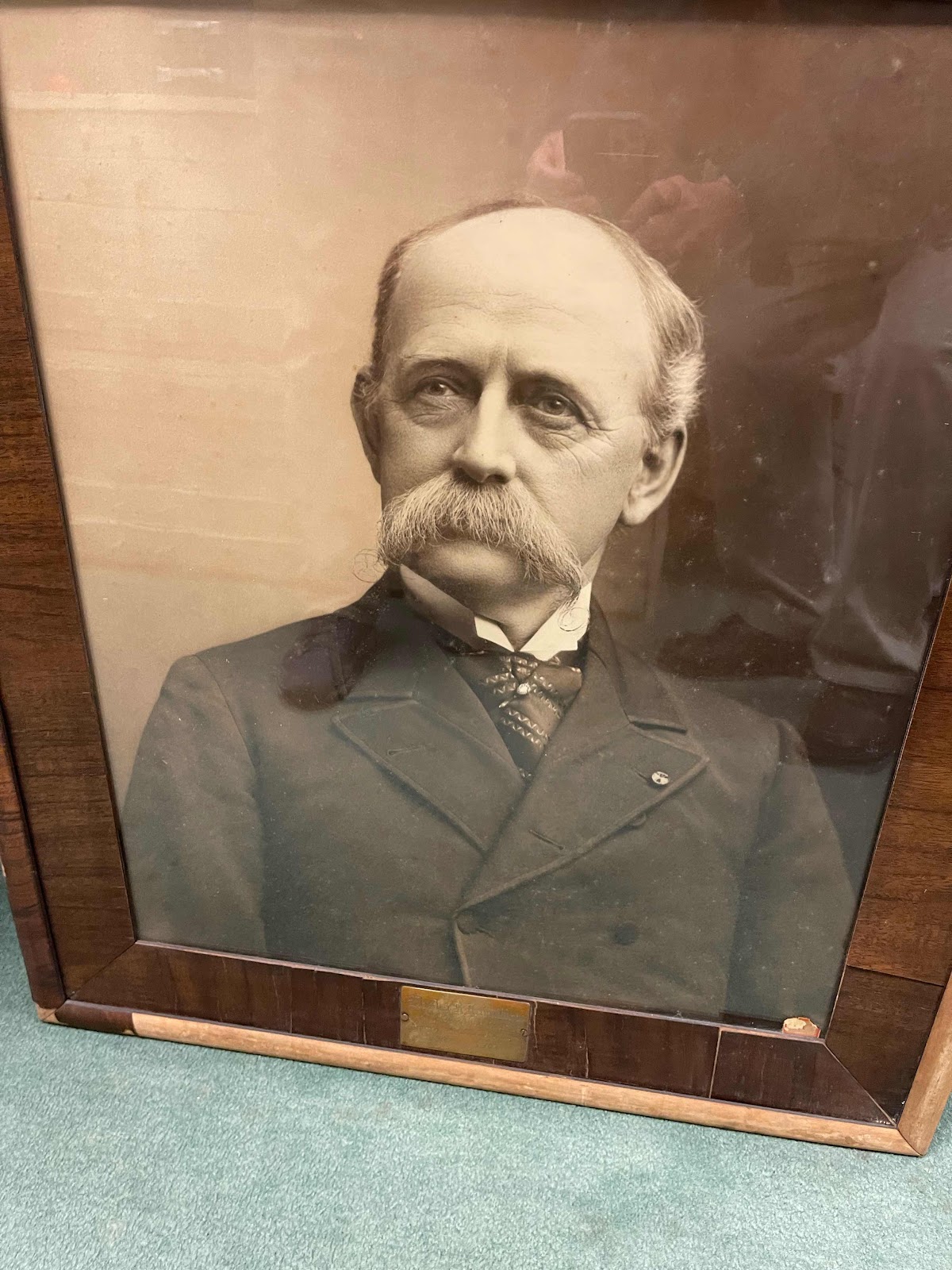 The plaque identifies him as the First Vice-President of the Quincy Historical Society, 1898-1902, the year he died.
We also reviewed a postcard picturing his house at 1416 Maine Street, torn down to make room for a medical clinic many years later. 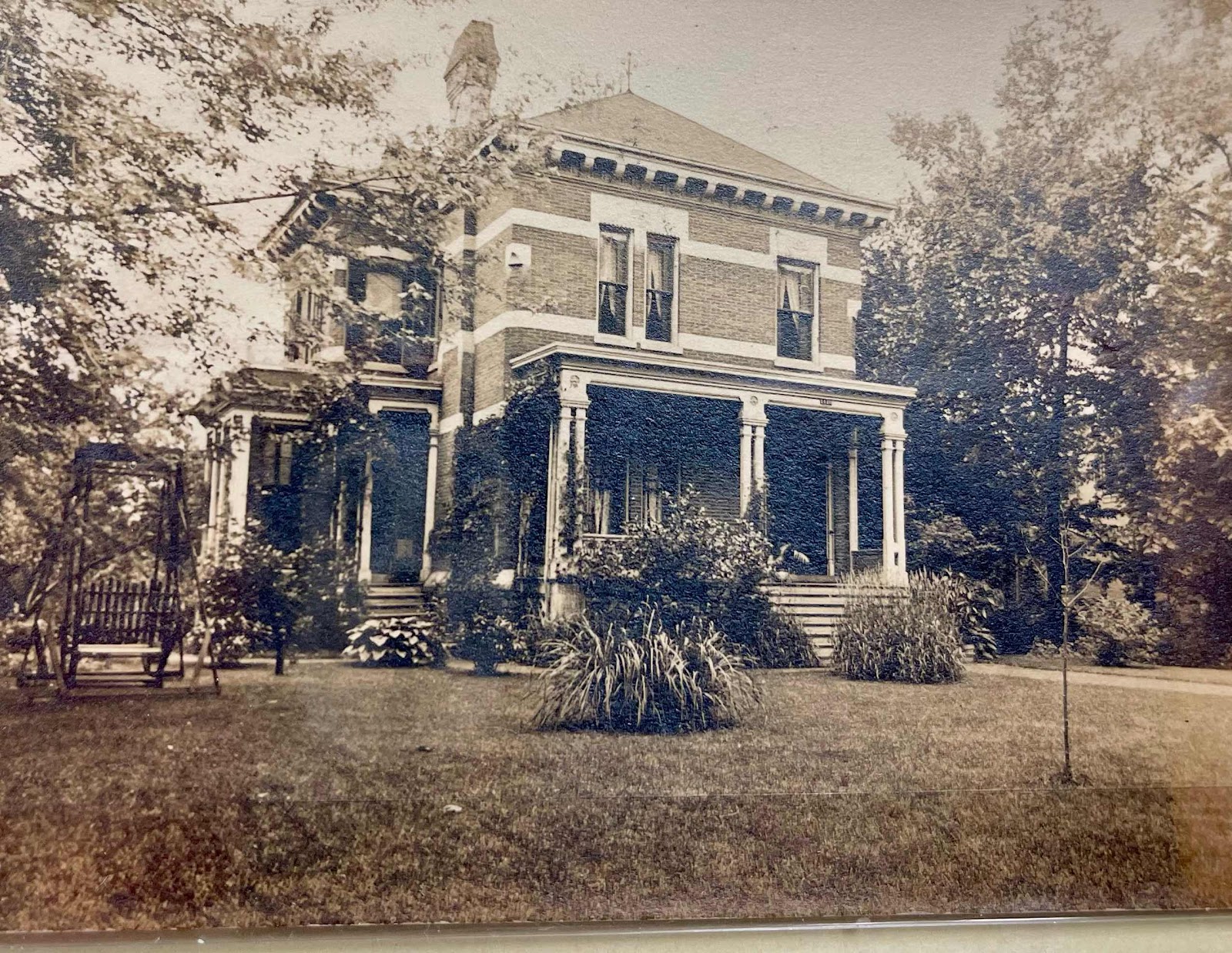 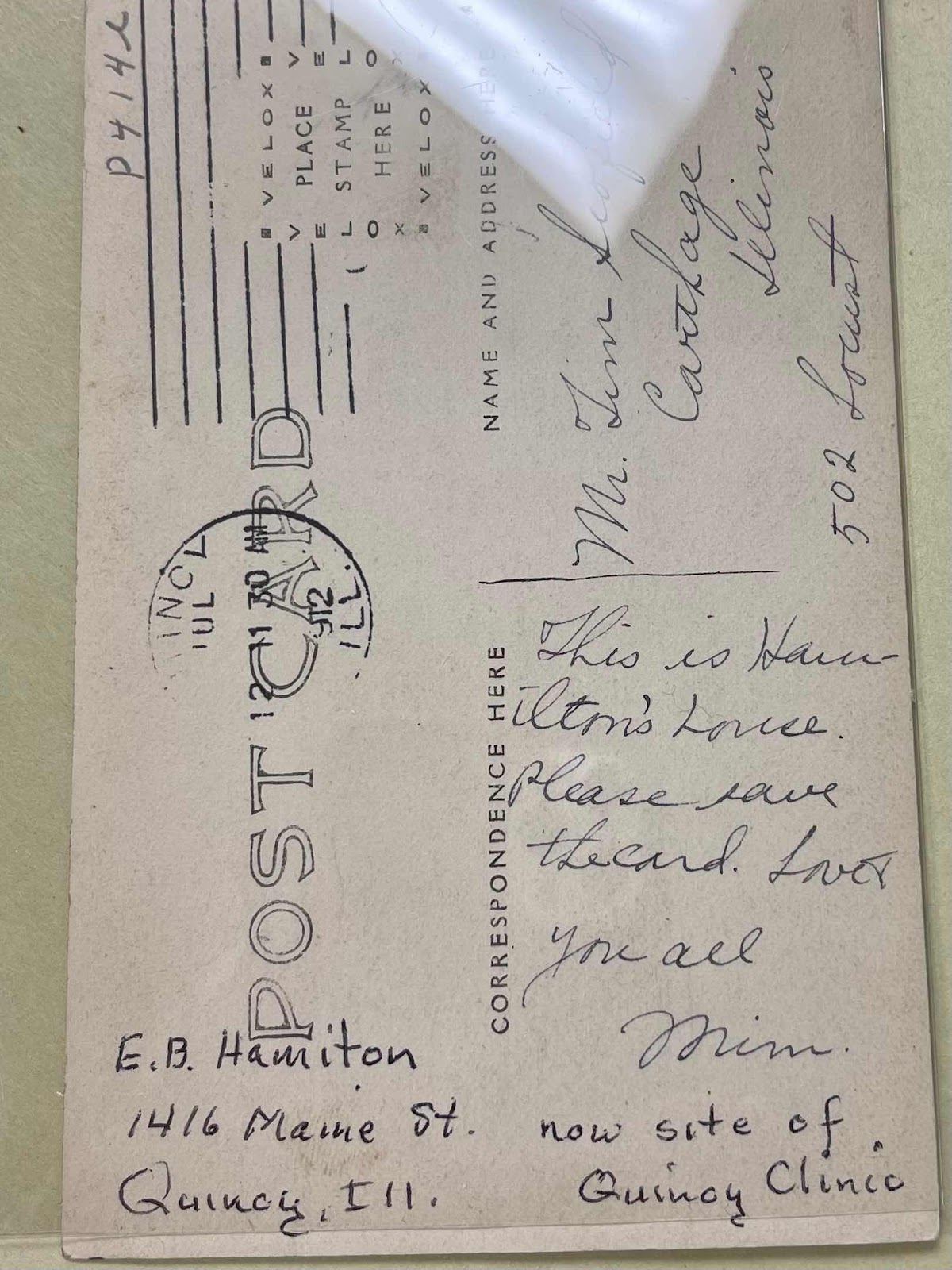 One highlight was the opportunity to examine six of General Hamilton’s Civil War diaries. 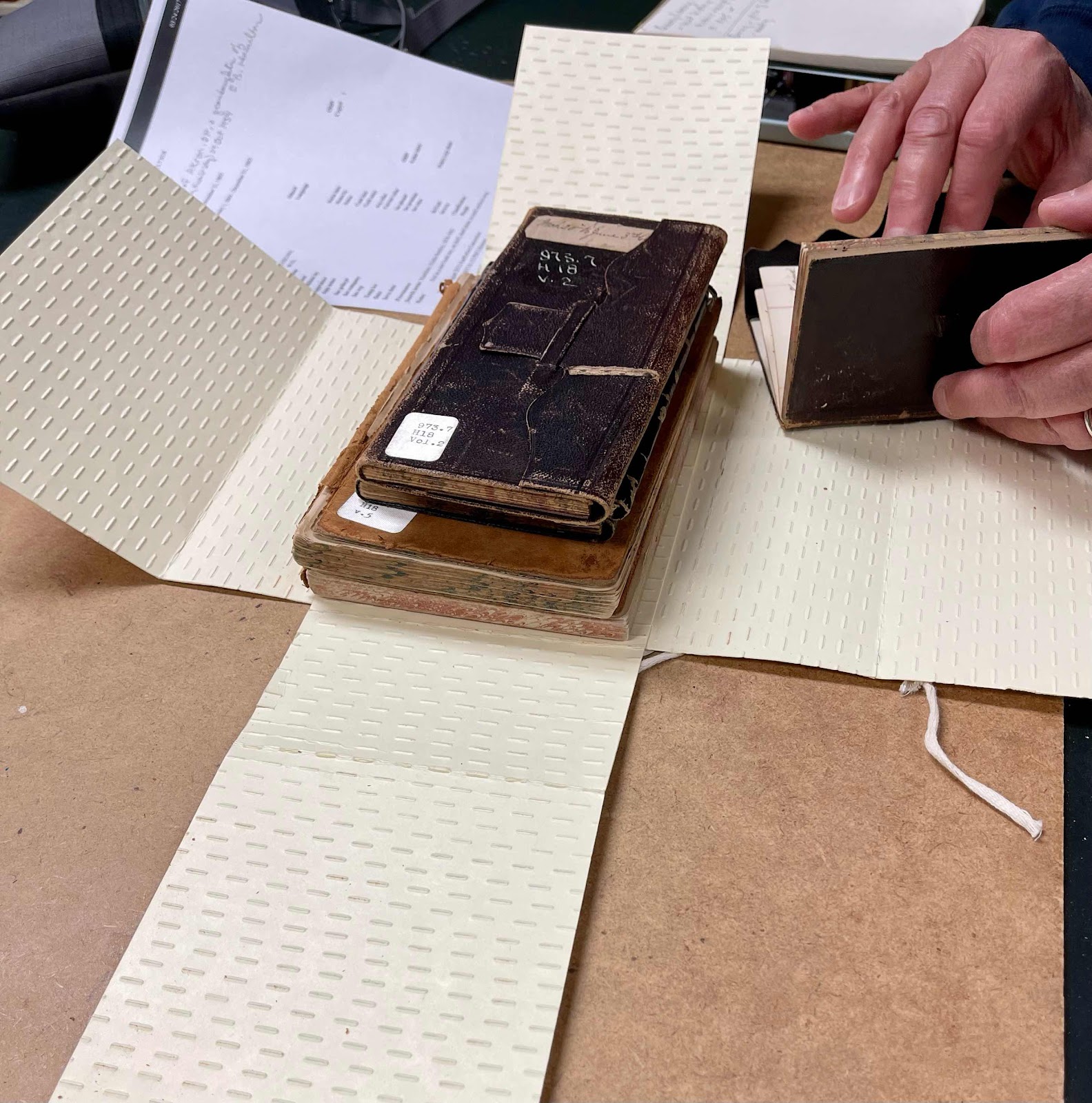 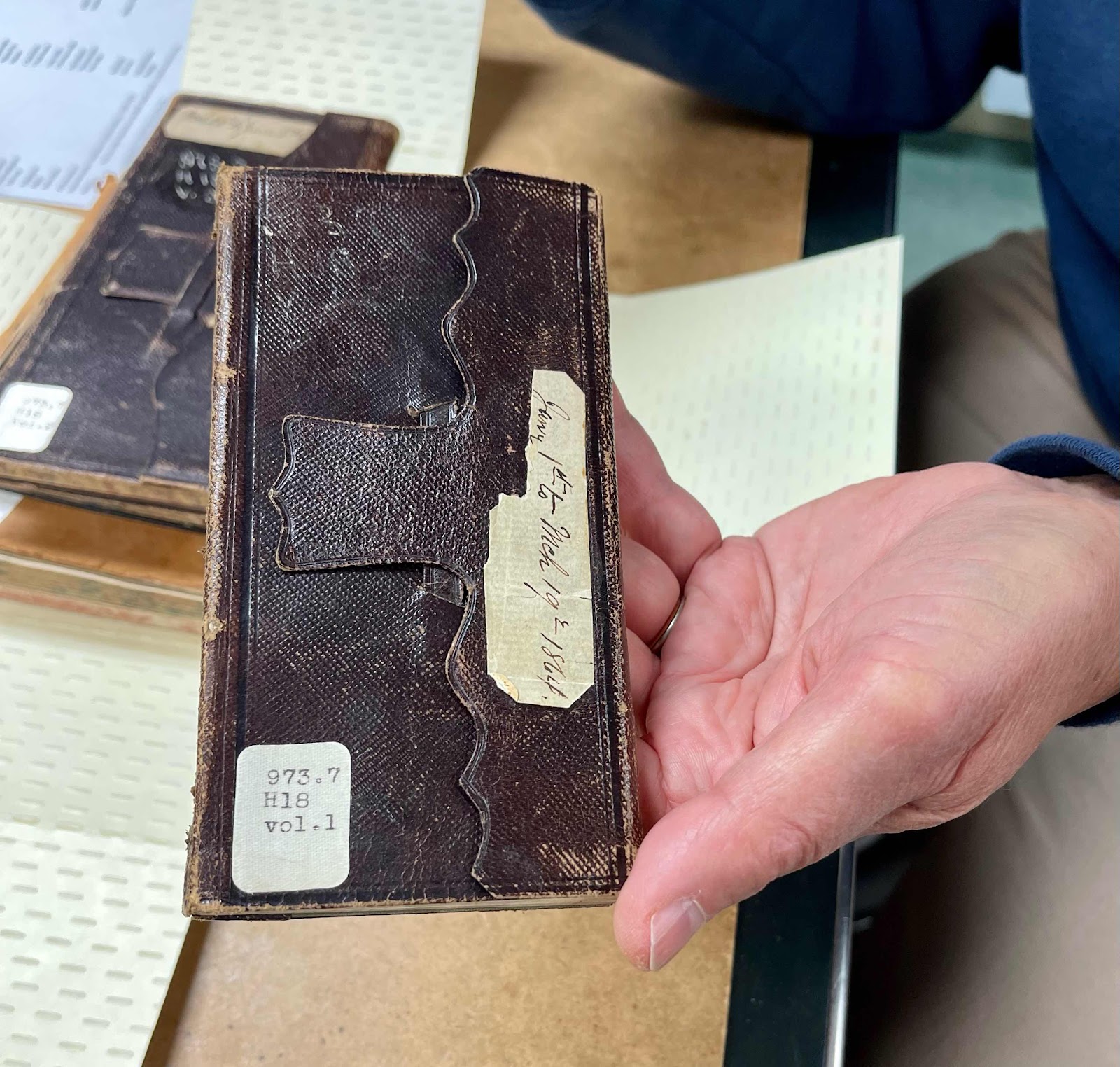 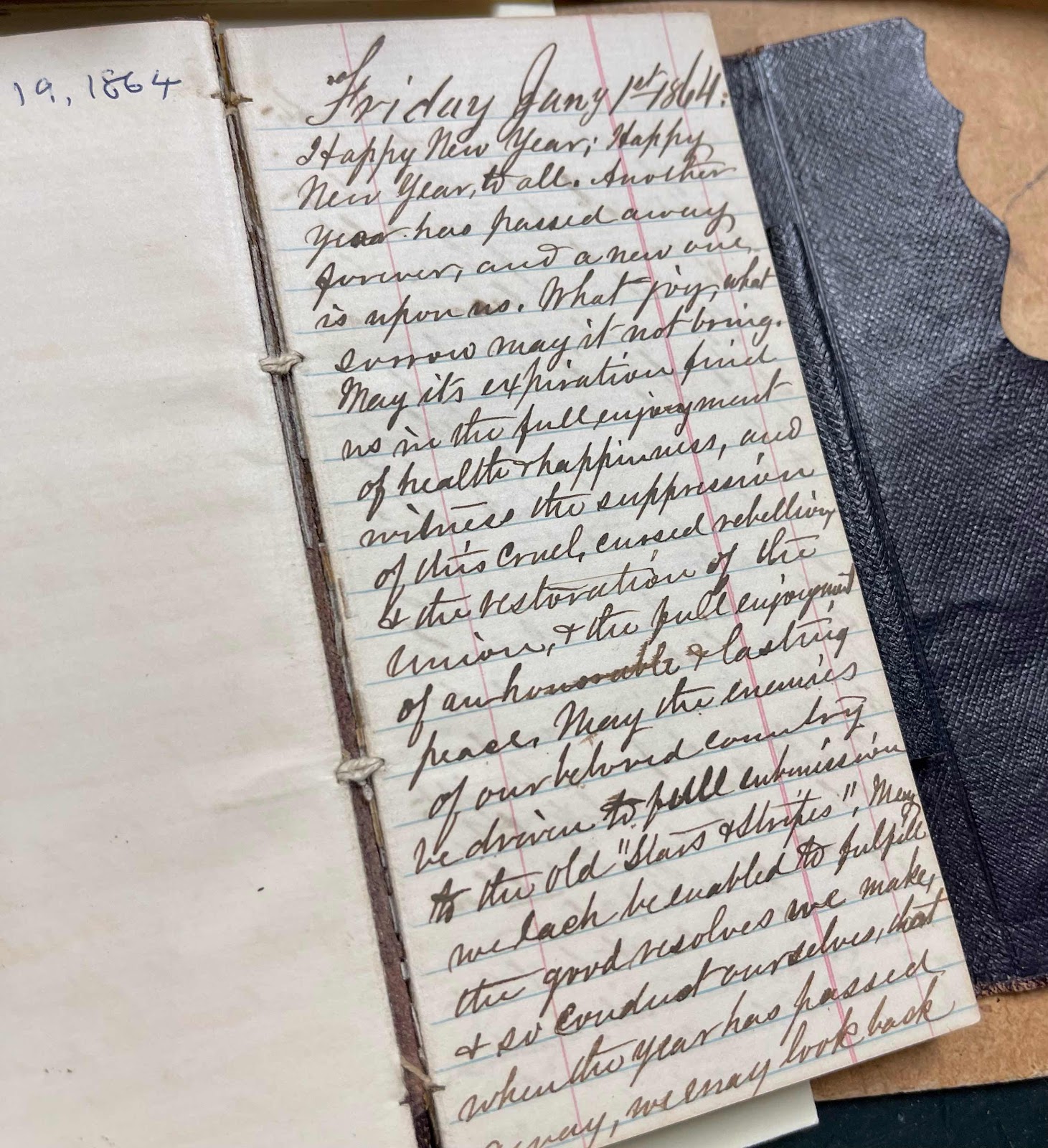 We’re meeting Beth and Rich tomorrow for a tour of the cemetery where General Hamilton is buried. We’ve added more photocopies of letters and other materials to study once we’re back home.
In the afternoon we took a break from all of this research and drove the 20 or so miles to Hannibal Missouri, the childhood home of Mark Twain. For 10 bucks each, we visited the museum, his childhood home, and a variety of other exhibits. 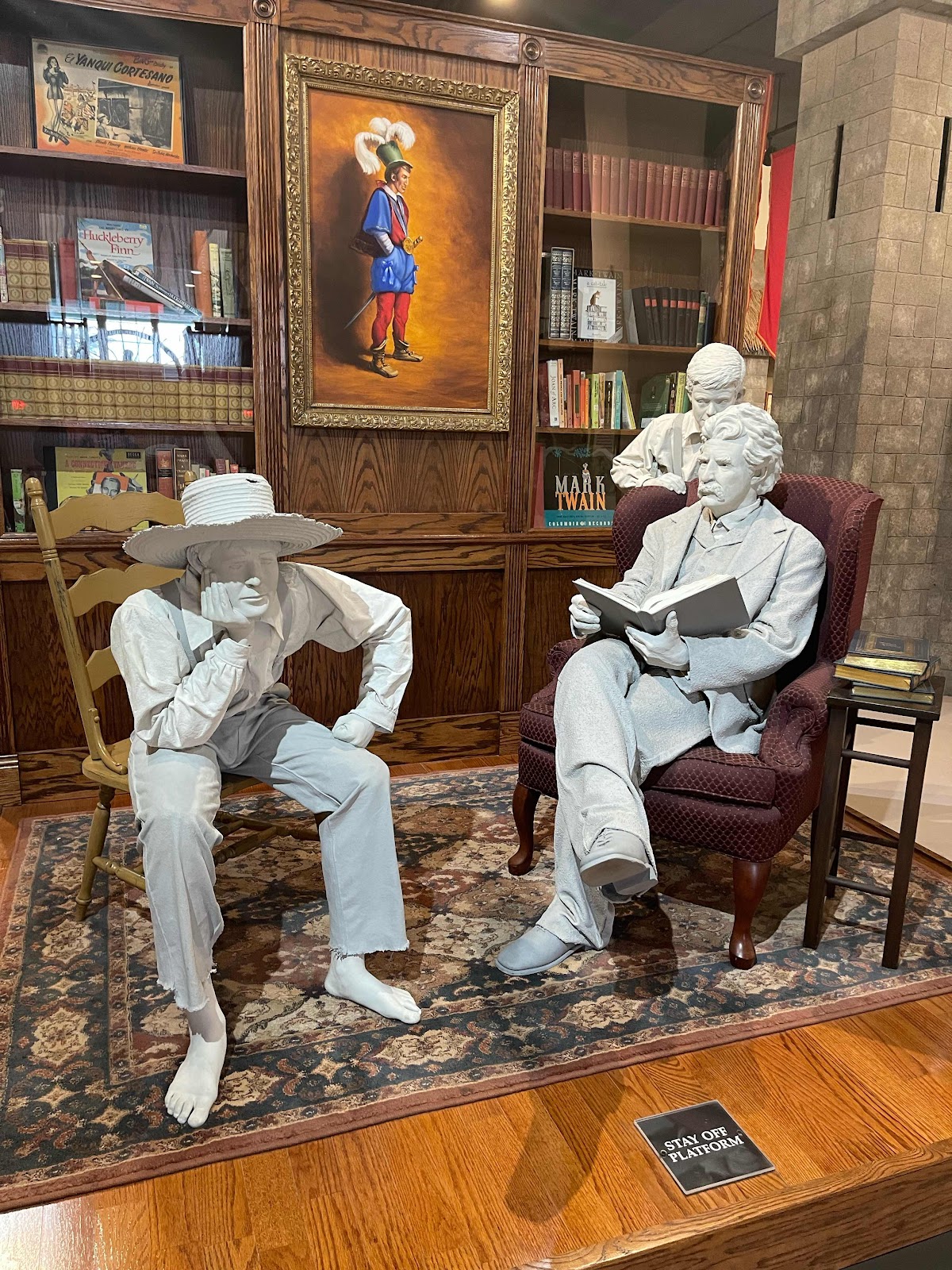 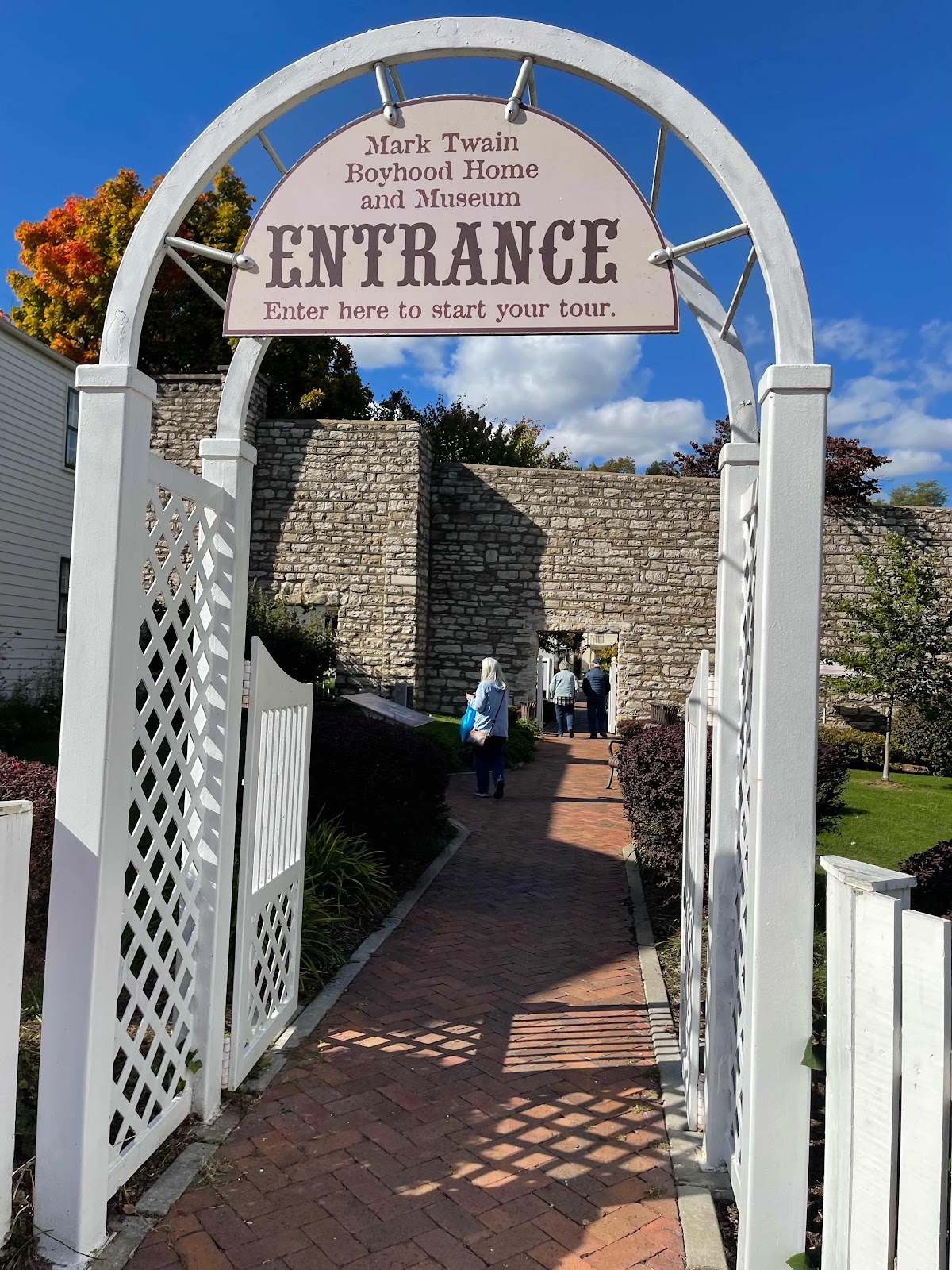 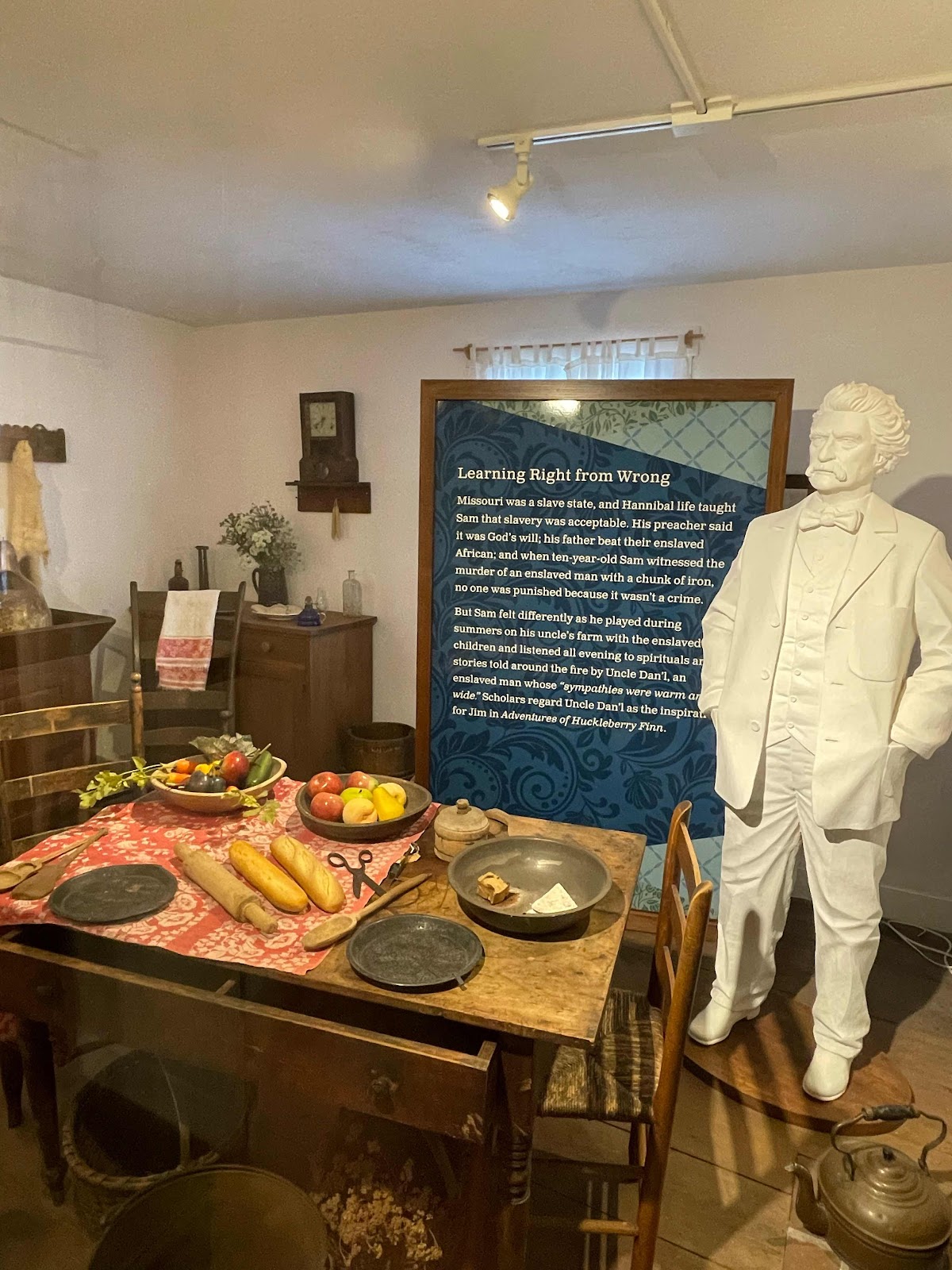 We topped off the afternoon watching a short and engaging live performance of some of Mark Twain’s autobiographical musings by Jim Waddell, a Twain “recreator,” 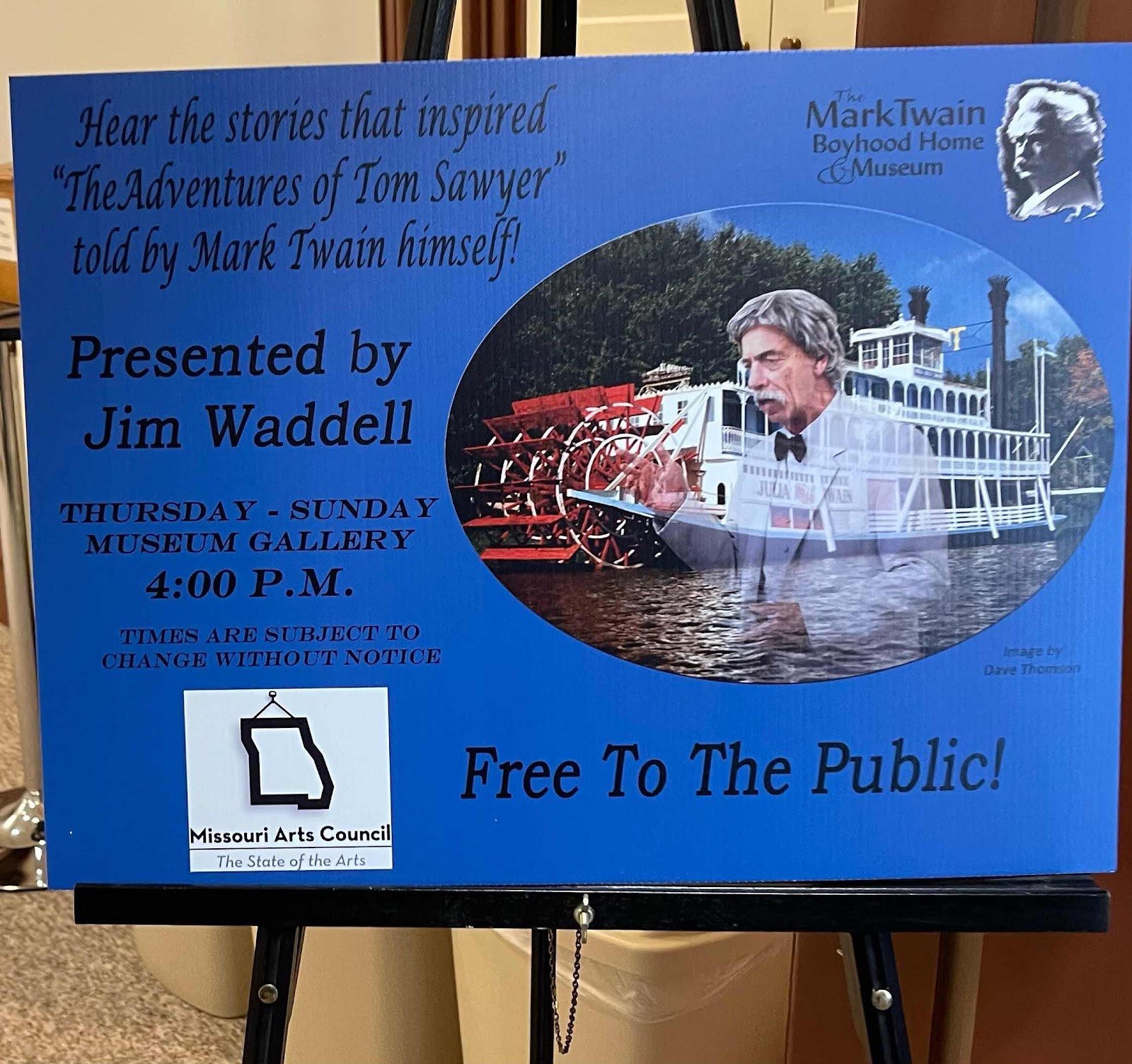 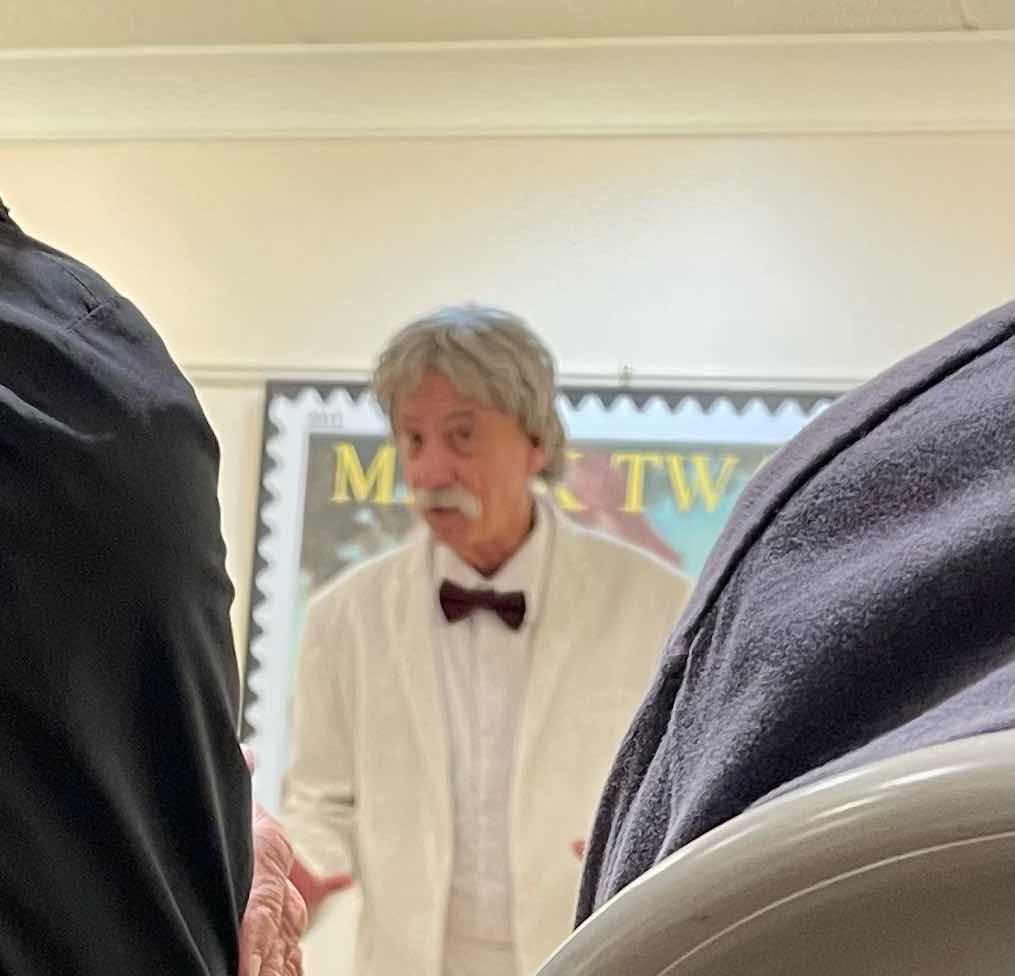 Excellent!
Tonight we’re burning some Marriott points to stay in a pleasant enough Fairfield Inn, that fortuitously happens to sit next door to one of Quincy’s best restaurants, Dunbelly.
We started with a warm goat cheese appetizer. Tasty! 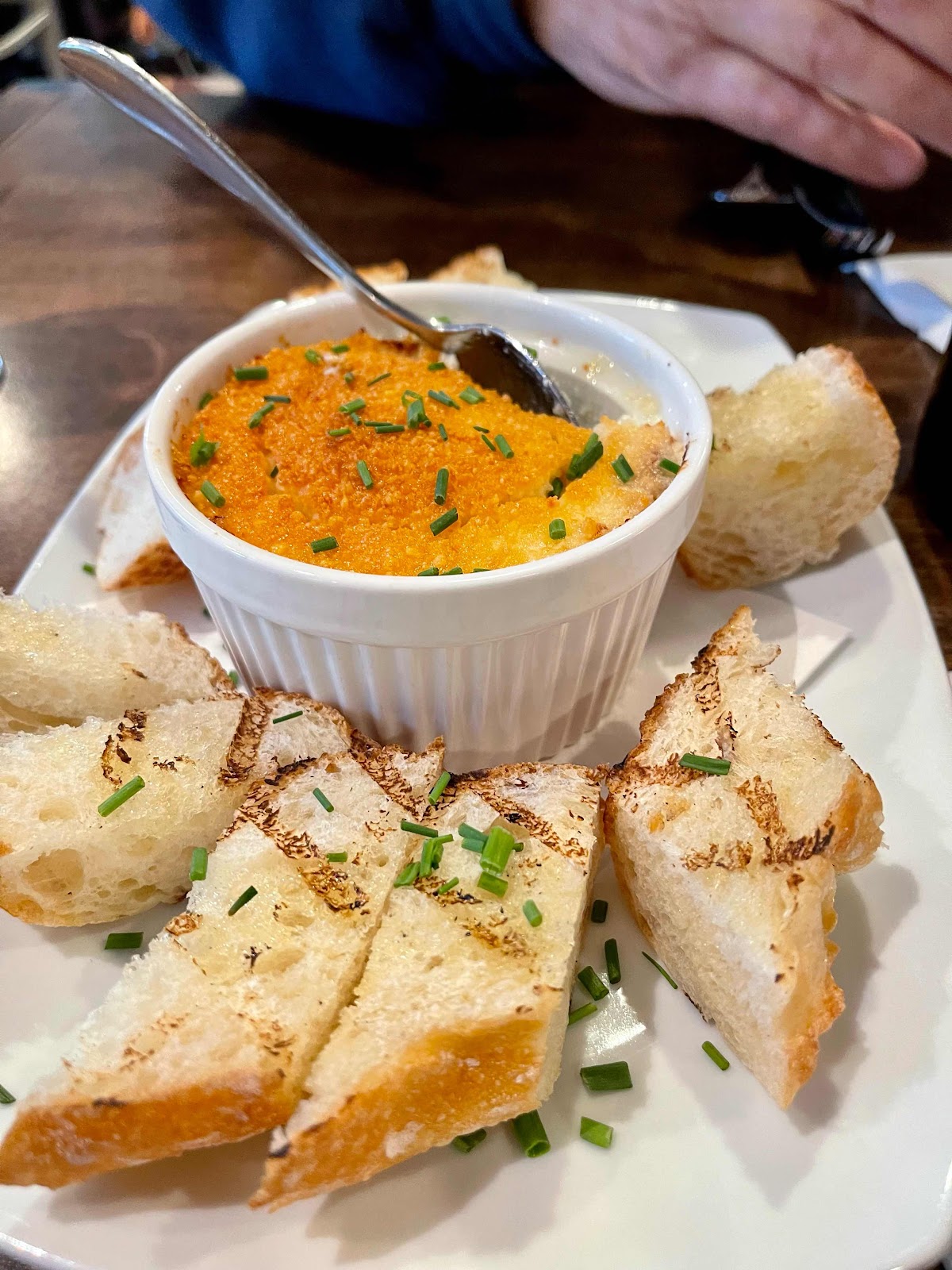 Our friendly server recommended two shrimp dishes, one with pasta and the other with a base of cheesy and spicy grits. Both were delicious. 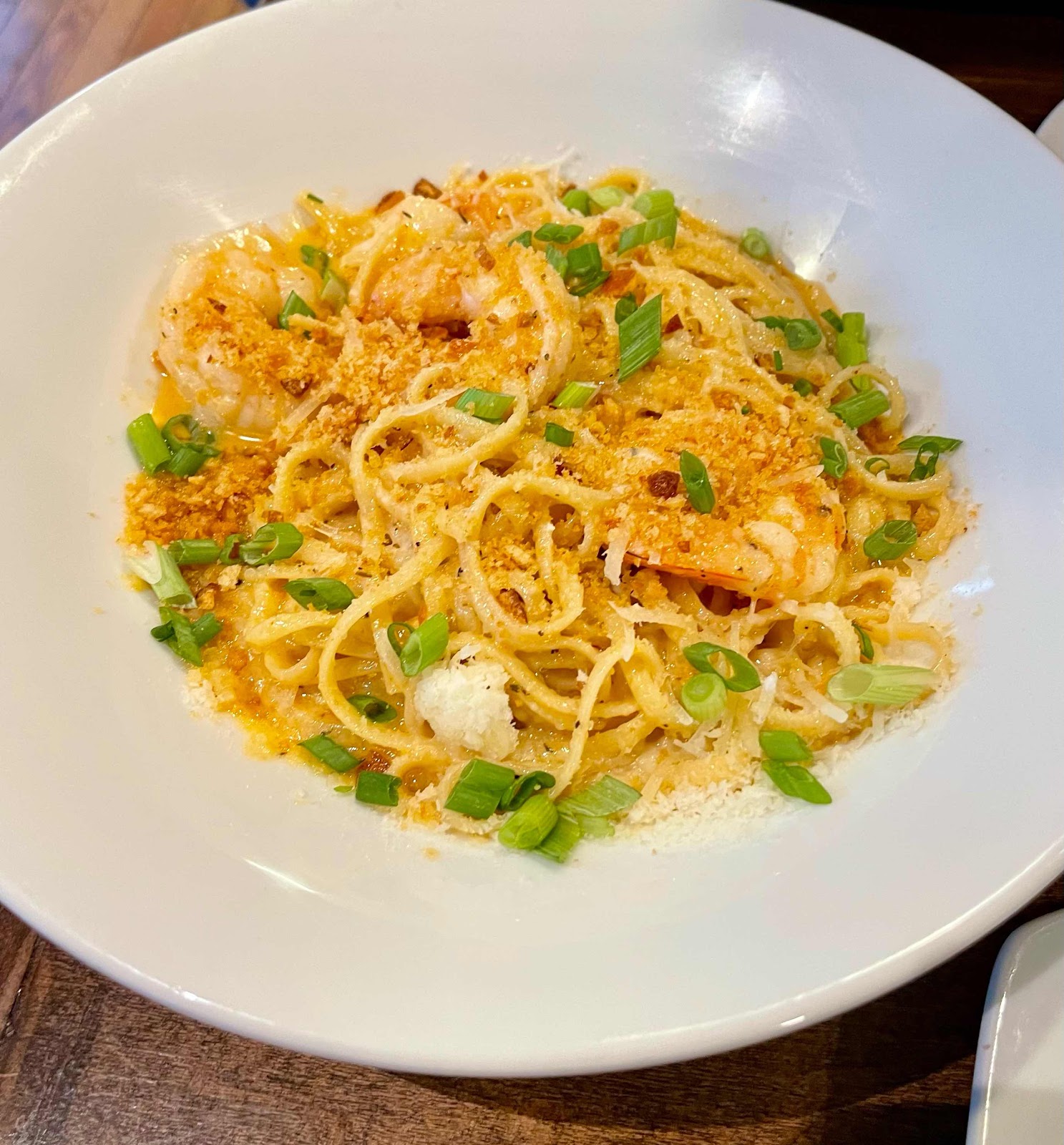 Yes, that’s bacon and pesto, jazzing up the grits. 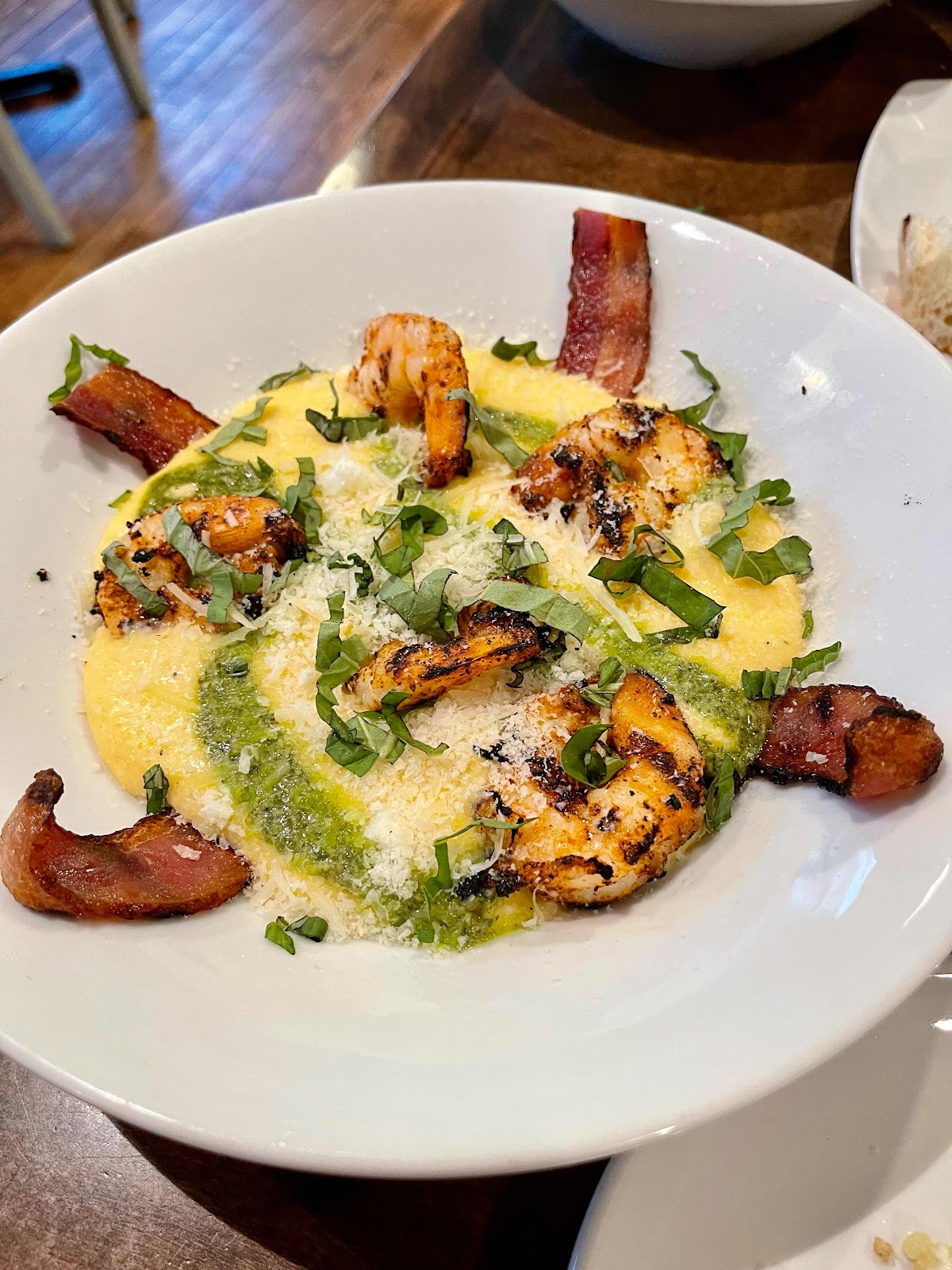 It’s been another rewarding day. We’re looking forward to a good night’s sleep and another day of discoveries tomorrow.