An Evening With the Lima Gourmet Company

We enjoyed a terrific culinary tour last night with the lovely Lourdes of the Lima Gourmet Company guiding us.
The only other guest was Paolo, a charming young Italian who lives in Spain. He courteously spent the four hours mainly in English and he was great company.
Lourdes and her driver picked us up at the Hilton promptly at 4:30, and we headed for our first stop, La Trastienda, a beachfront spot where Lourdes revealed to us the mysteries of Peru's national drink, the Pisco Sour. 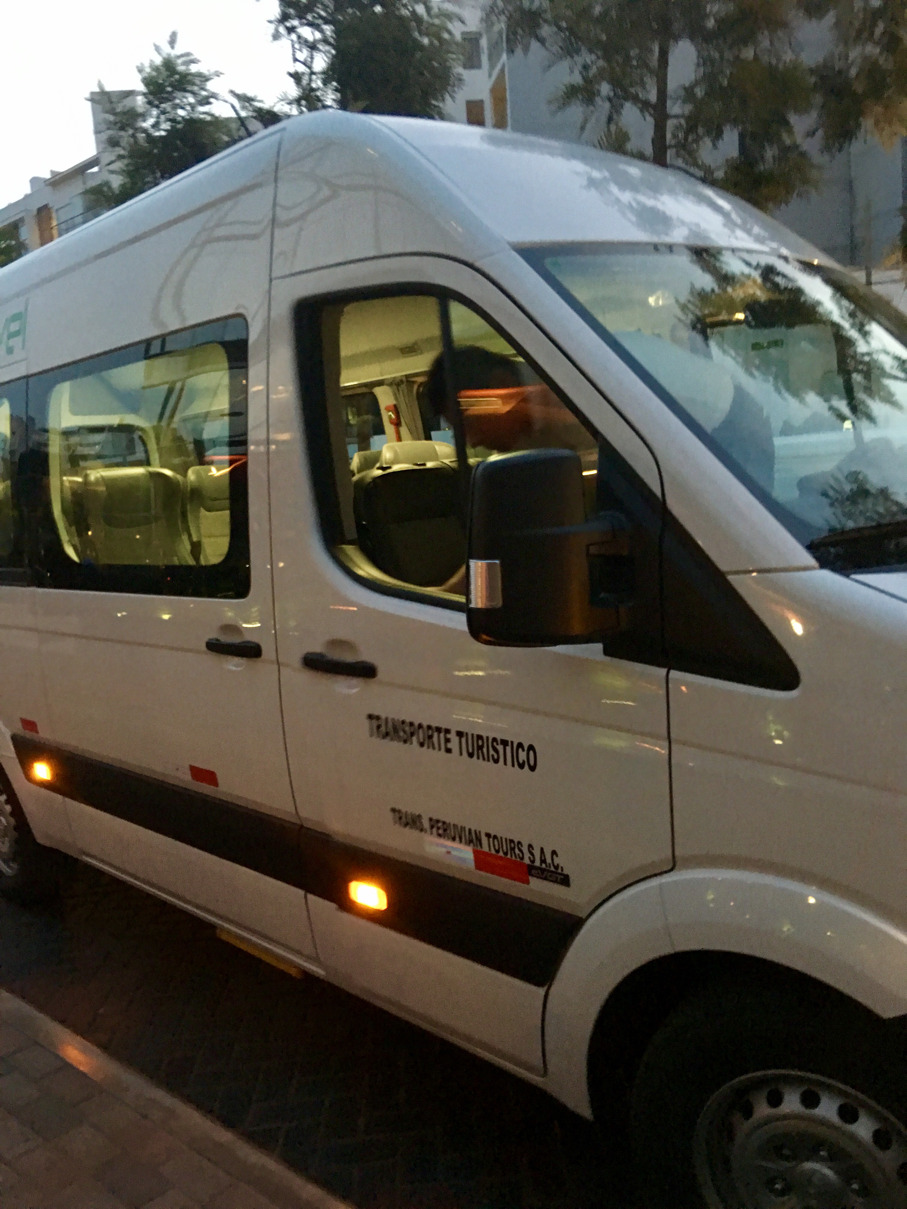 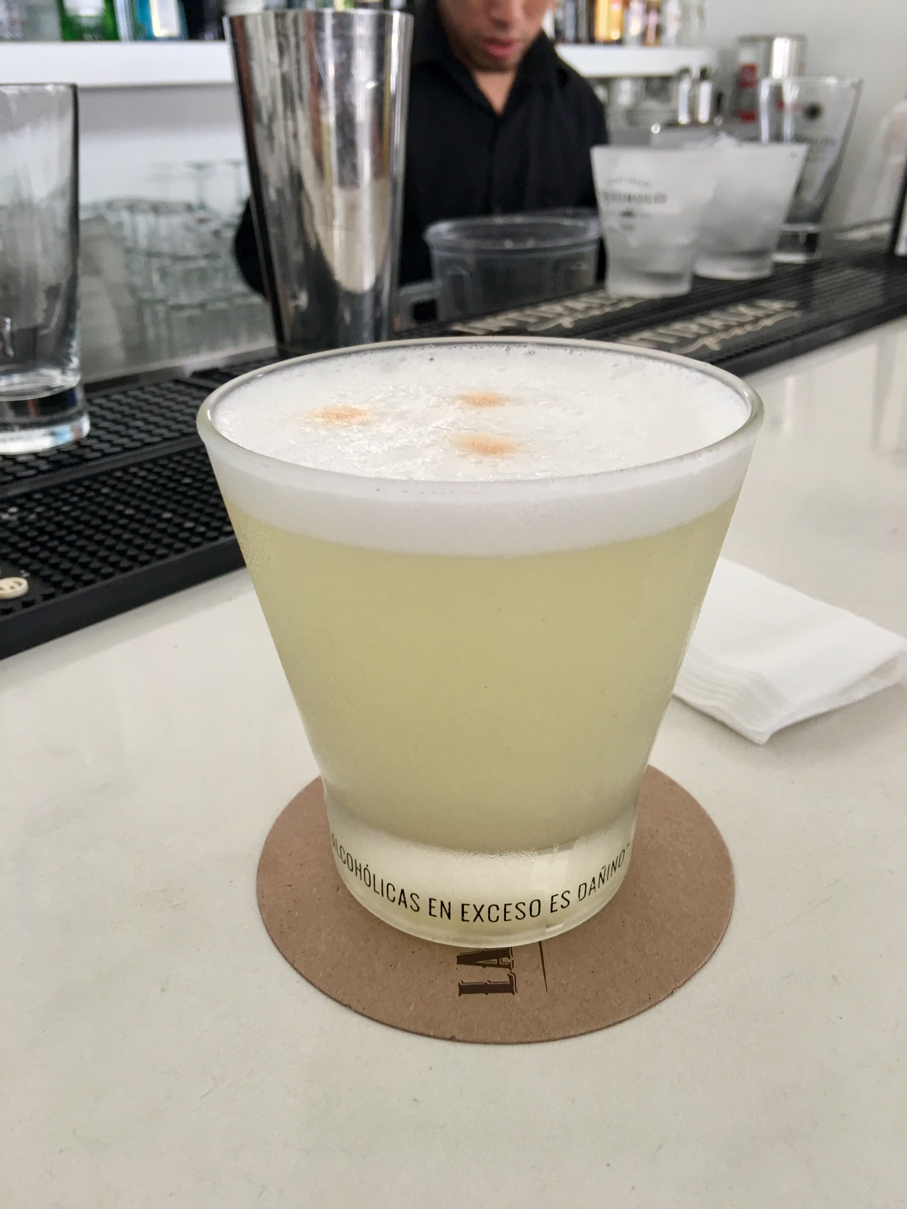 Pisco is actually a brandy made from grapes; the non-aromatic variety used for the classic drink is 42% alcohol or 84 proof. The three ounces that comprise the booze in a standard Pisco Sour make for a pleasant wallop. 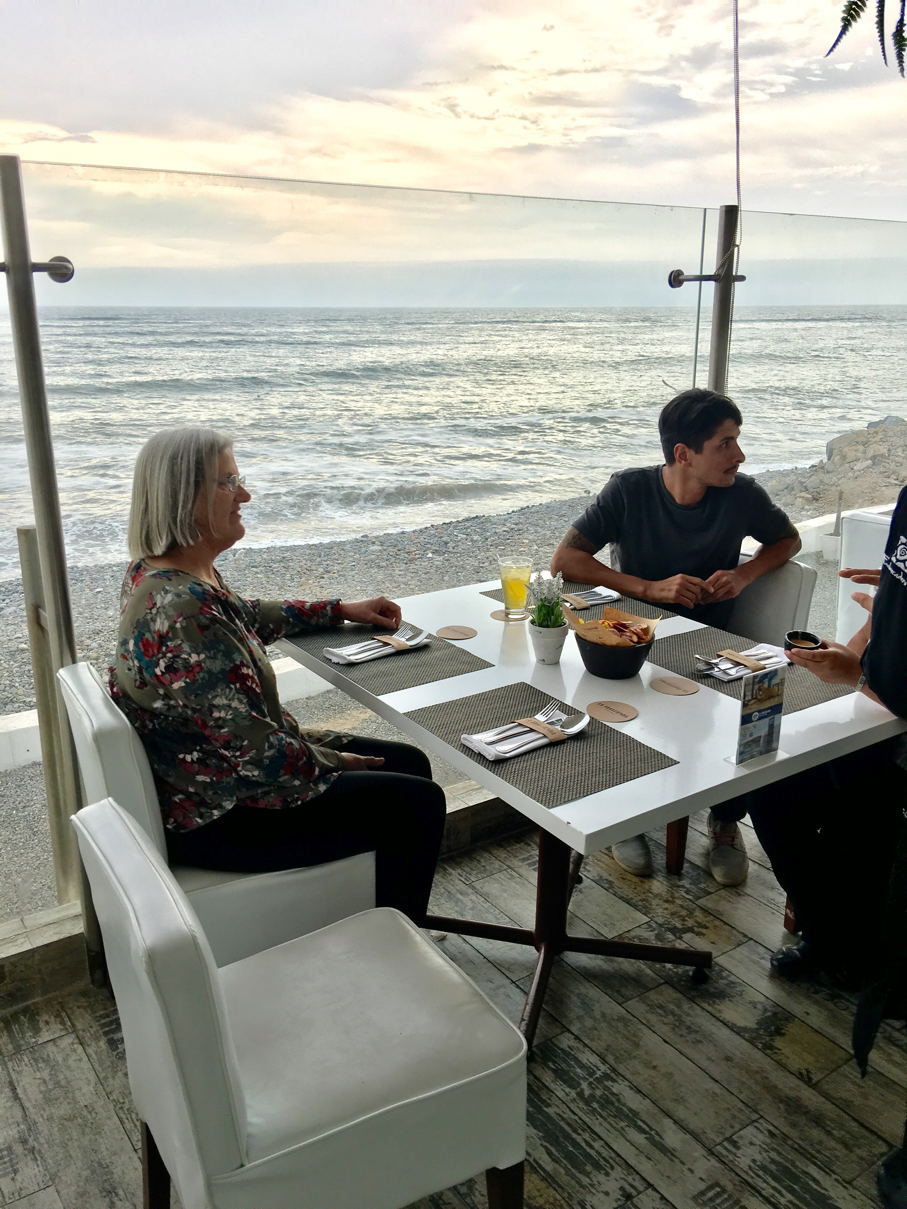 You don't go far in Peru without seeing potatoes in some form, the country boasting thousands of varieties. You couldn't find a prettier potato chip than these beauties to go with a three-ounce libation. Lourdes kept us entertained and well fed throughout our four-hour tour. Our second stop took us to Amaz, a charming joint next door to our Hilton.
The Amazon jungle accounts for 60% of Peruvian territory and is home to over 3,000 types of edible fruit and accounts for 77% of Peru's fish supply. Amaz deals with sustainable agriculture farmers. One of our first treats was a Plantain Cebiche that we assembled ourselves. 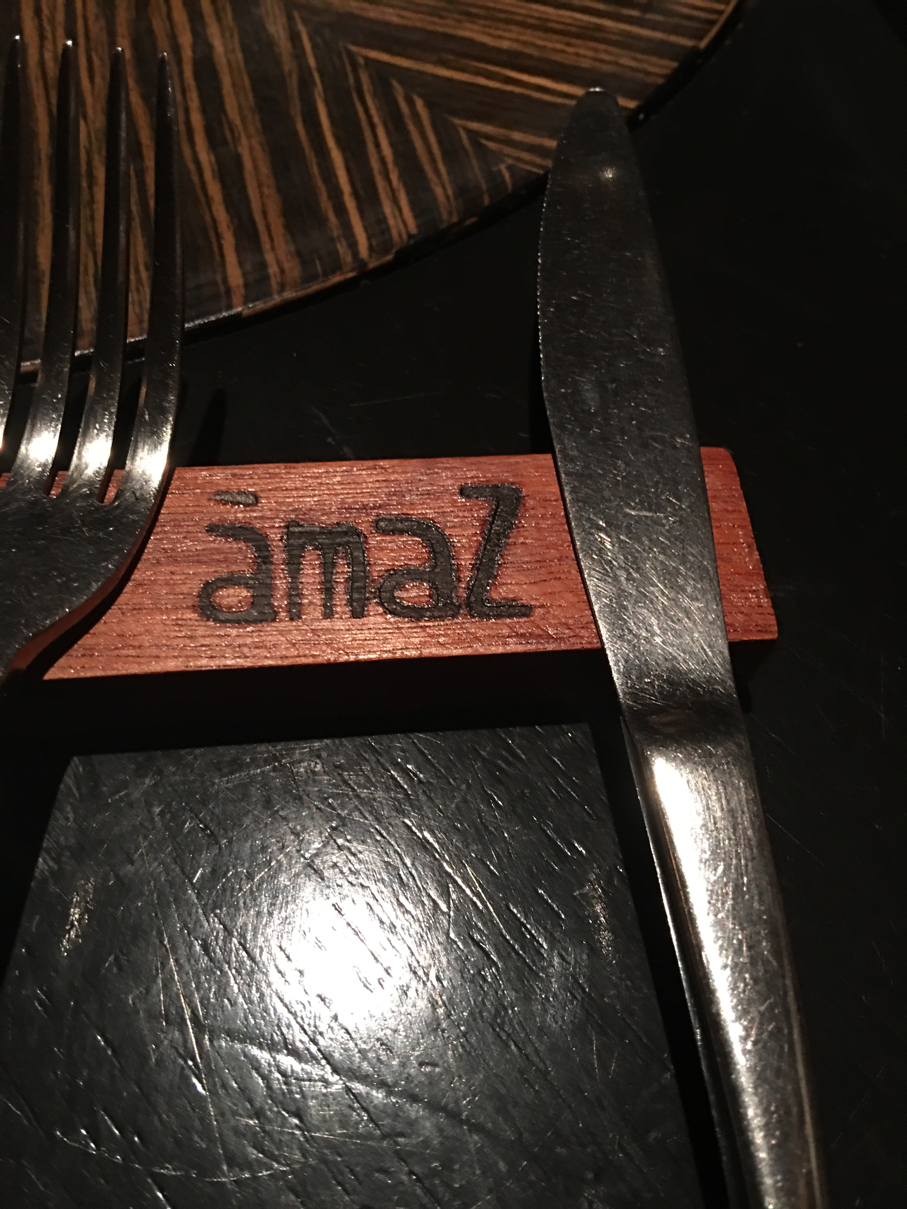 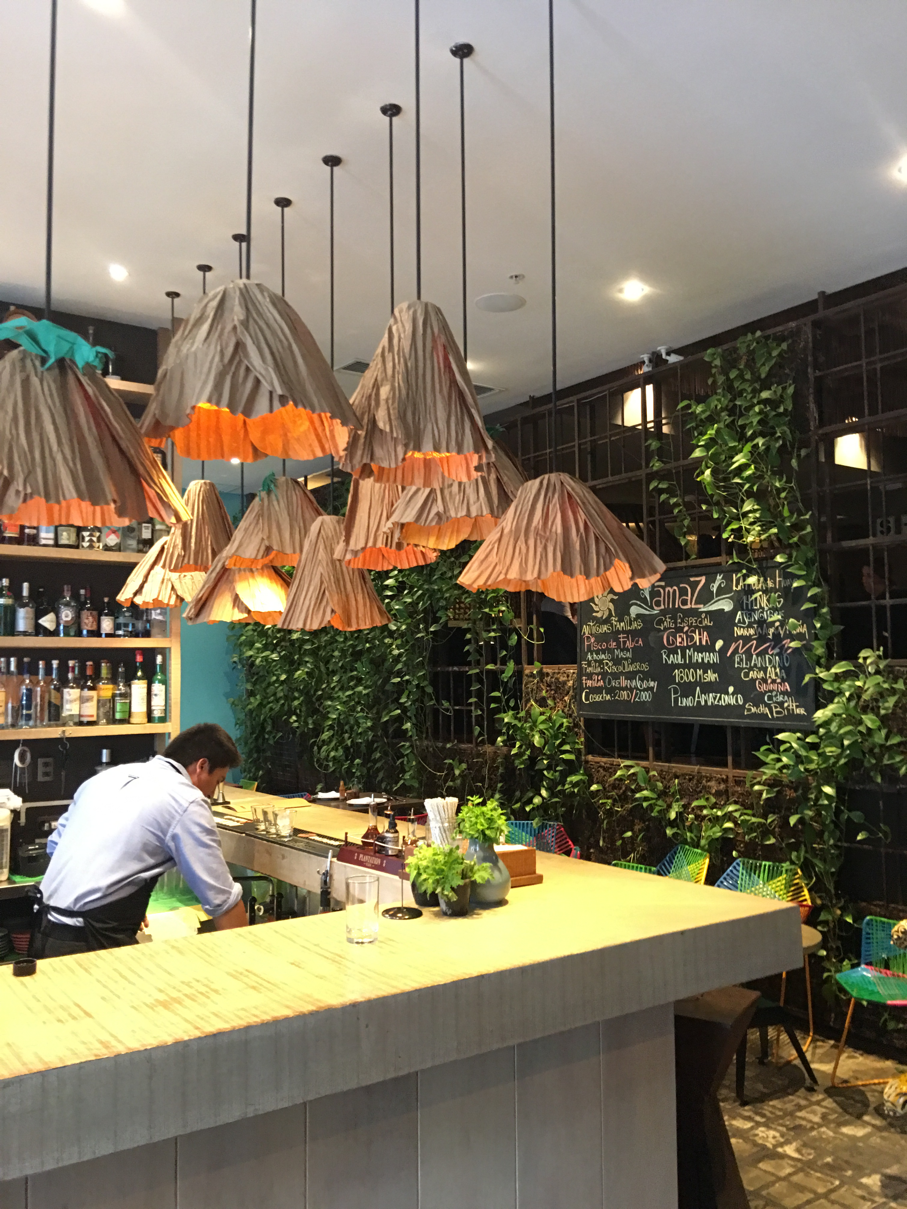 But that wasn't all. How about Pollo Kanga, Sacha Chaufa, and Cachapas... 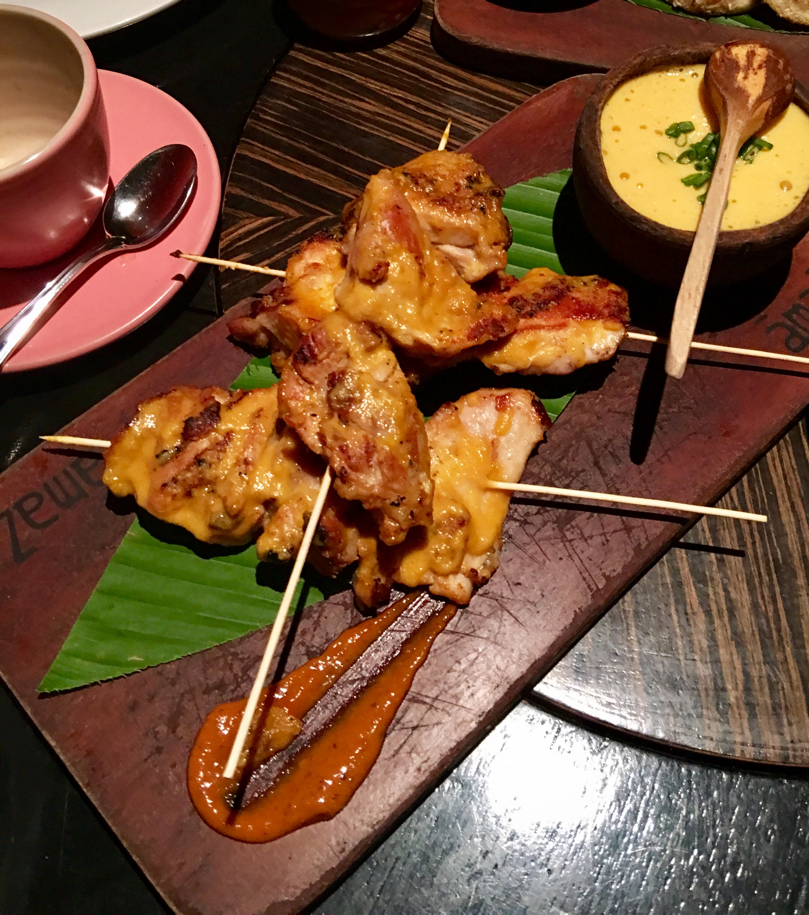 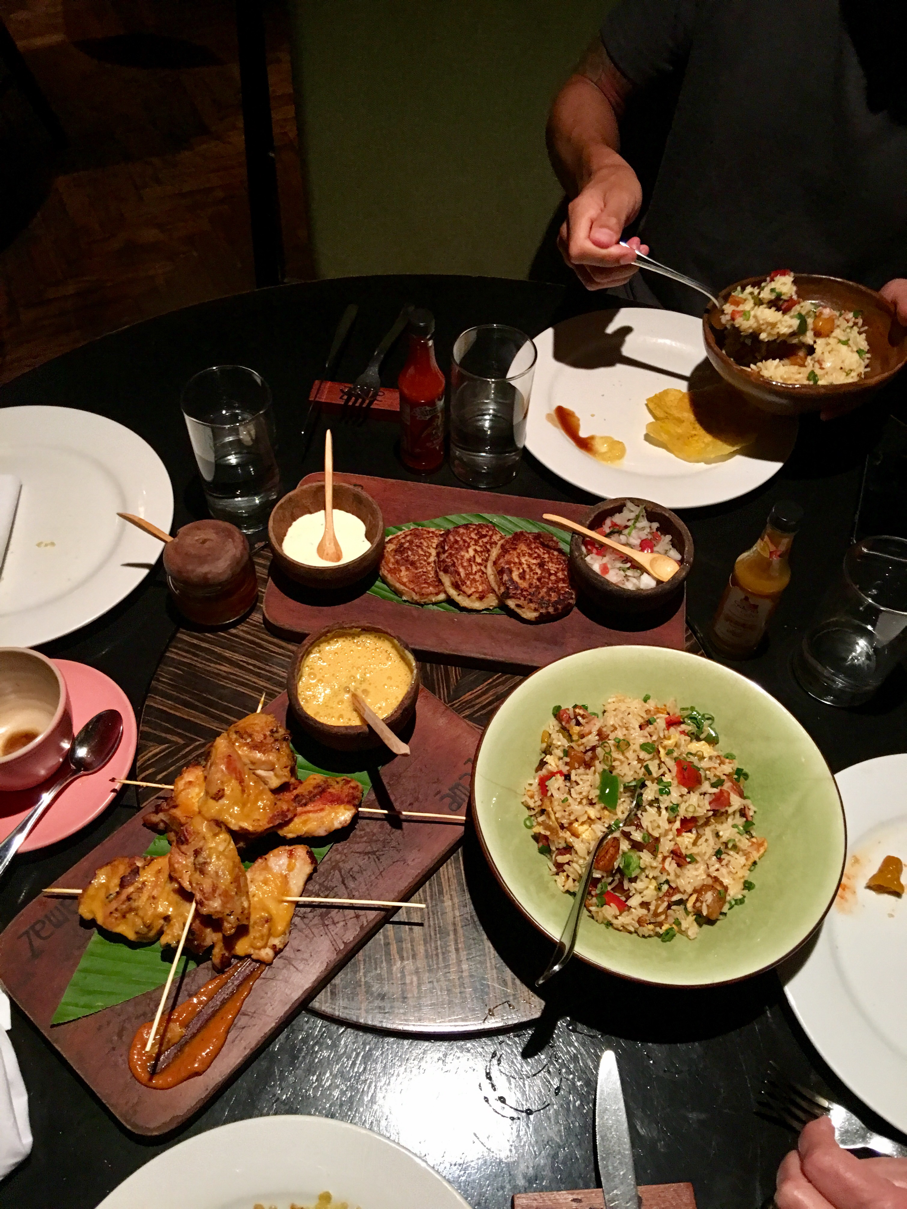 From there it was onward to one of the most famous eateries in Lima, La Huaca Pucllana Restaurant, sitting adjacent to La Huaca Pucllana itself, a massive pyramid of adobe and clay considered sacred ground.
This famous archeological site was most likely the ceremonial and administrative center of the Lima culture. 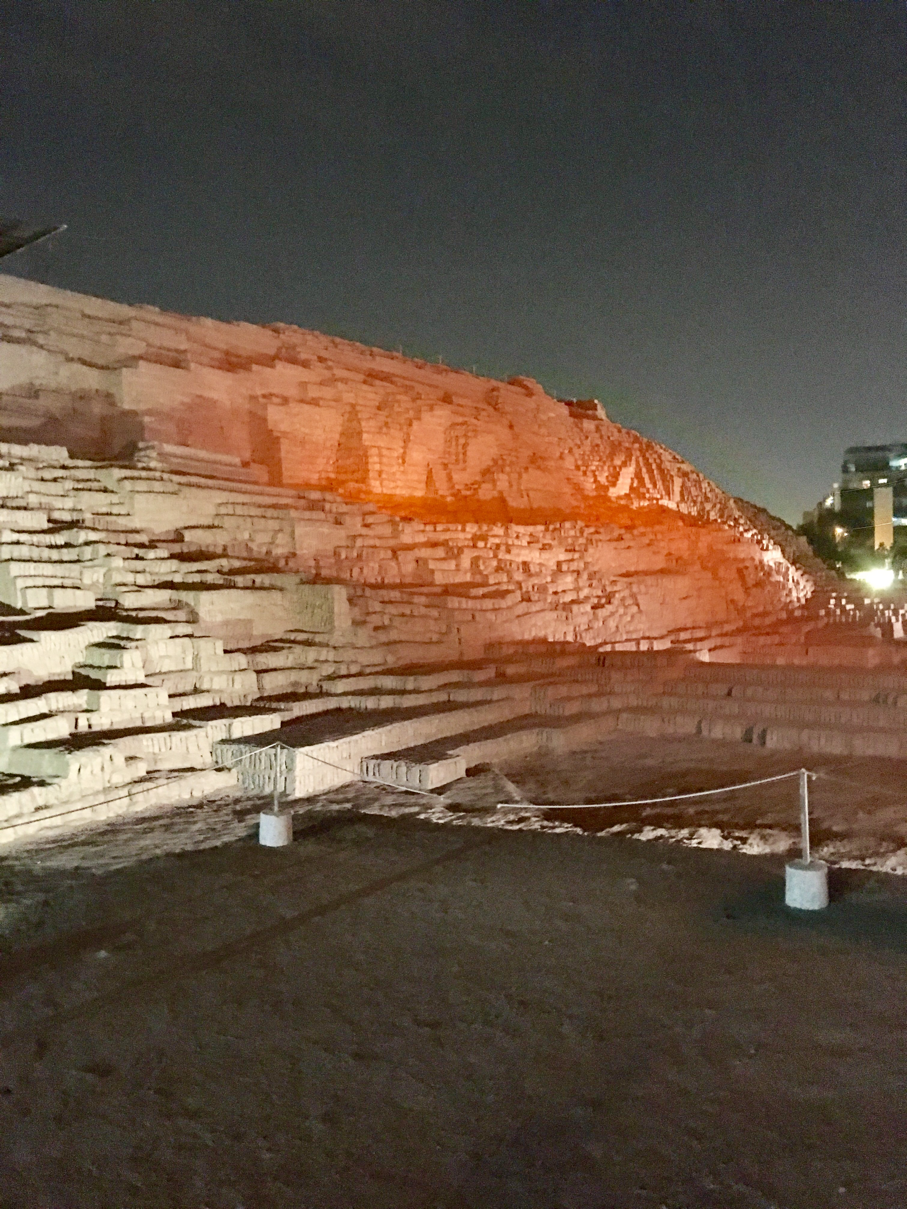 For a society of fishers and weavers, they were a violent lot in terms of human sacrifice.
Between 200 and 700 AD royal women were sacrificed to the Goddess of the Sea to appease her during the phenomenon of El Niño. 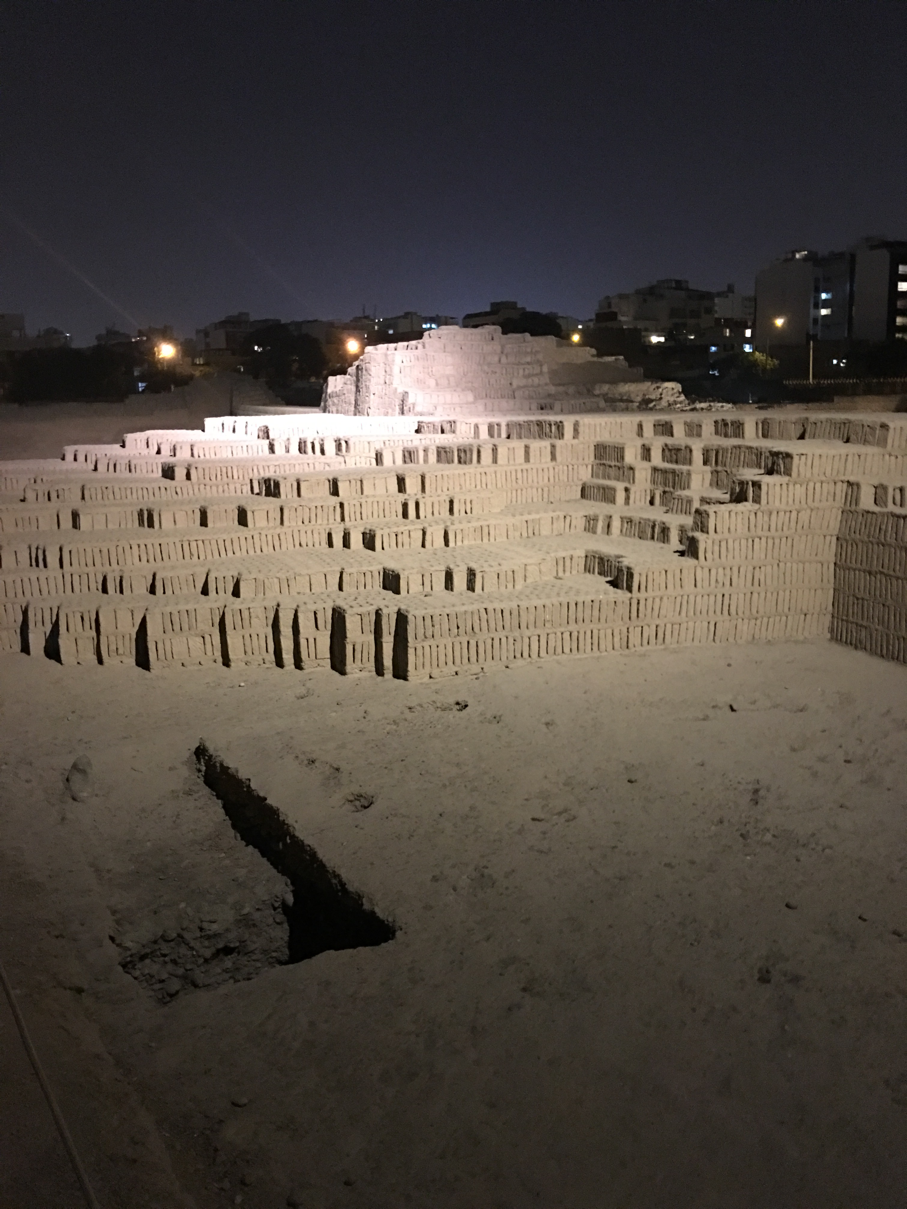 The restaurant itself is charming and we sat in an open area adjacent to the ruins. 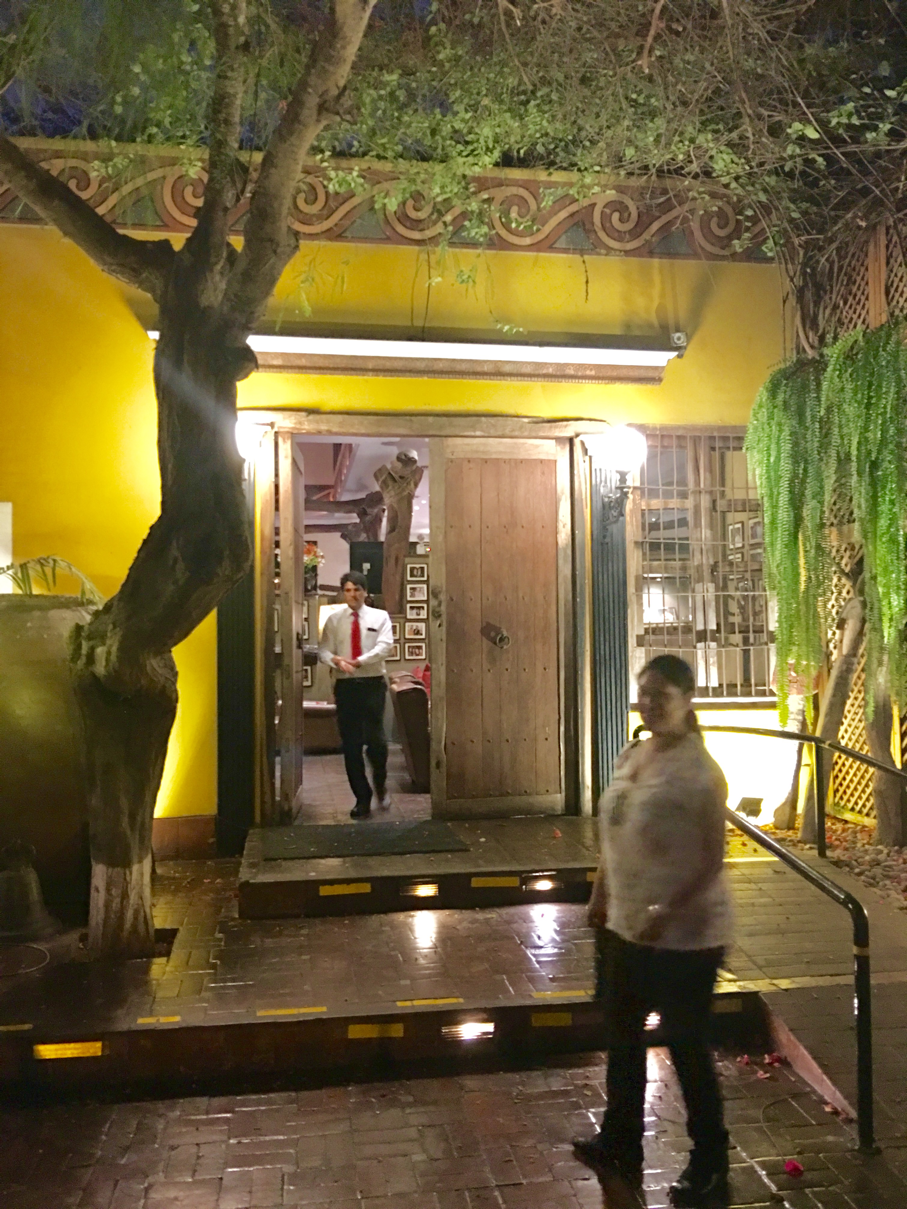 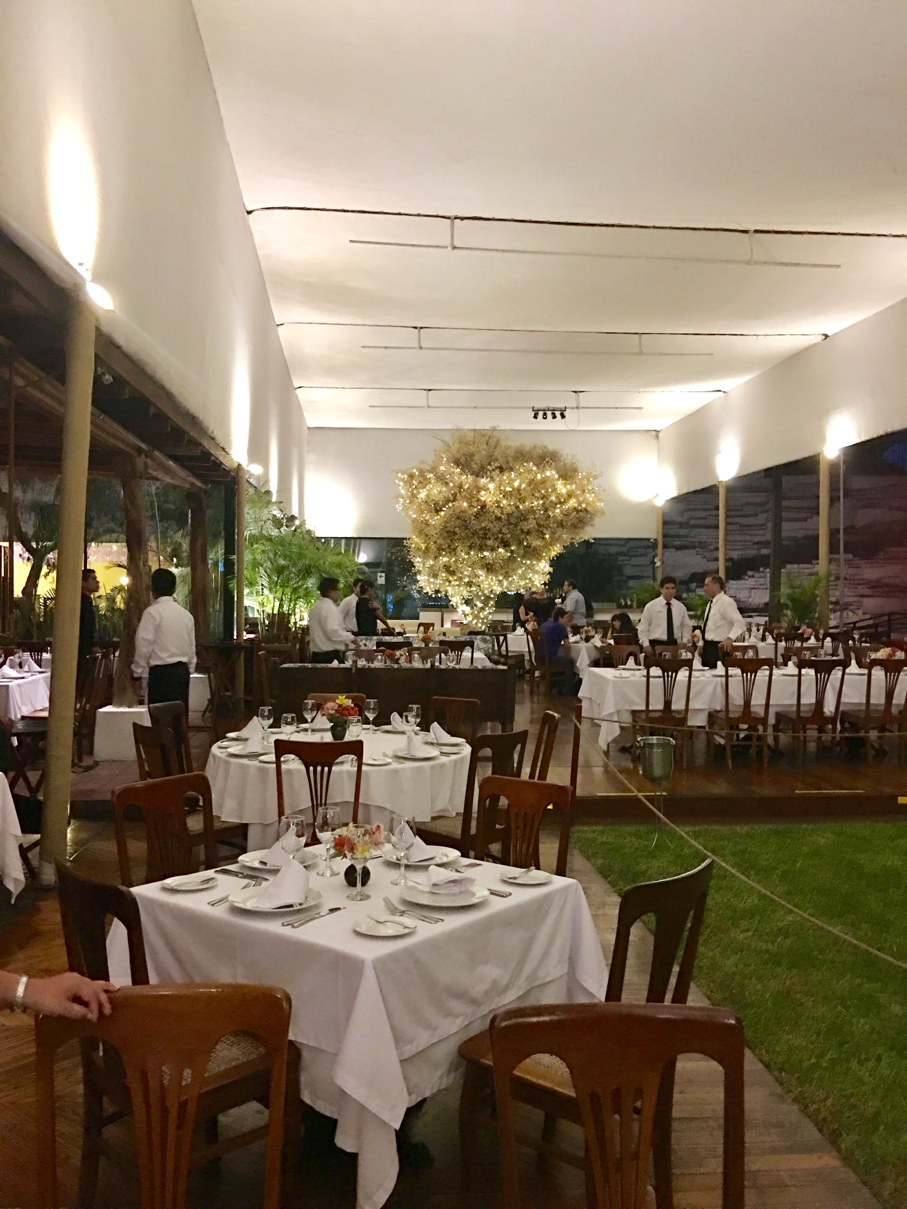 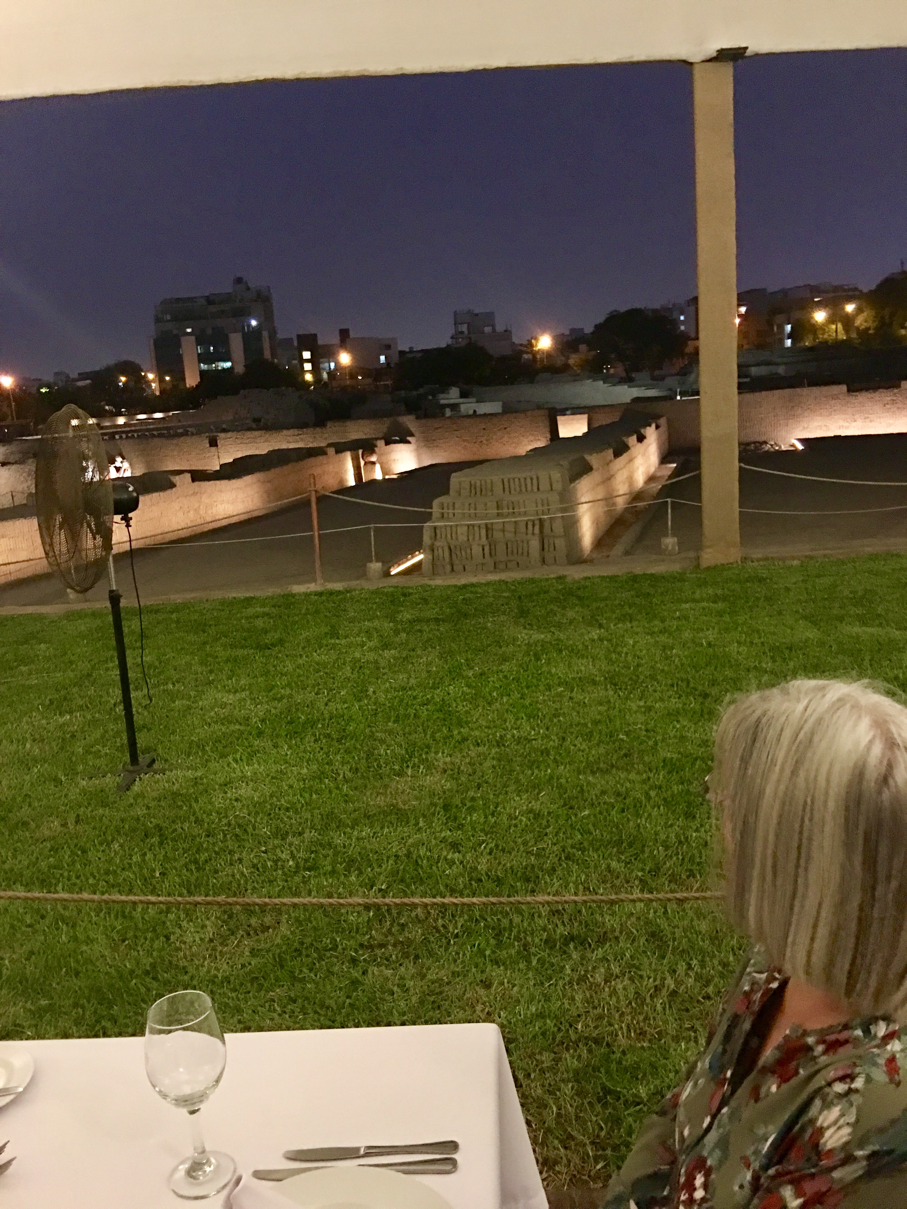 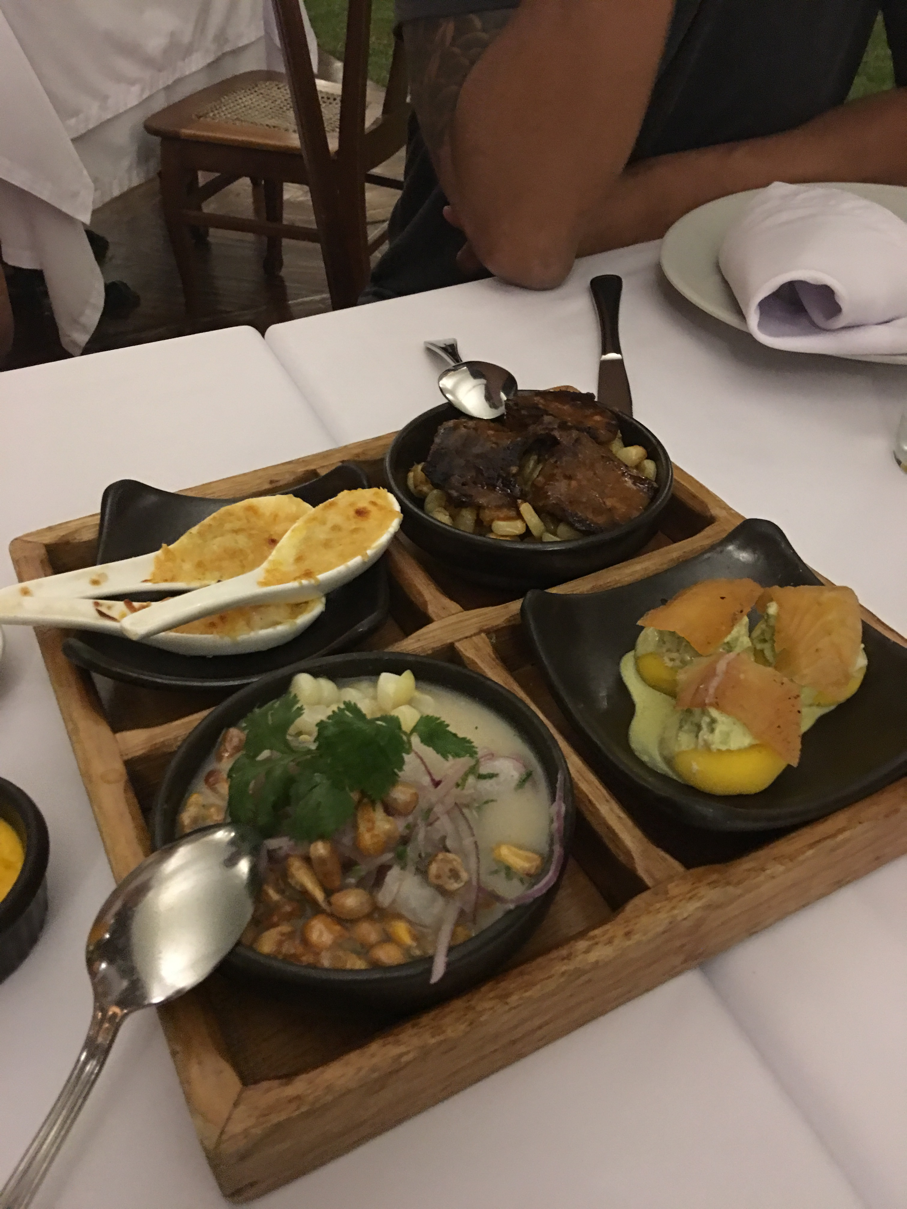 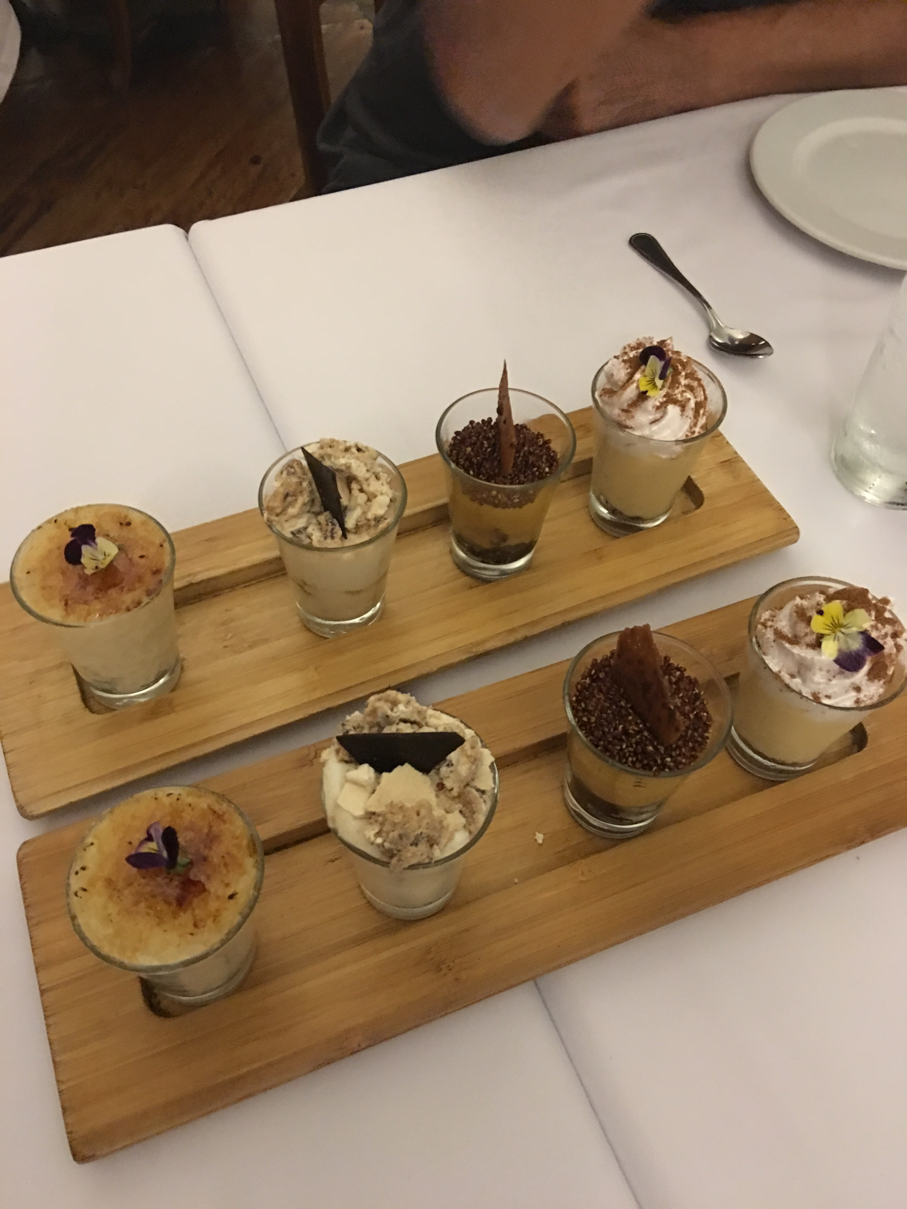 The desserts were actually too sweet for our tastes, but beautifully presented. 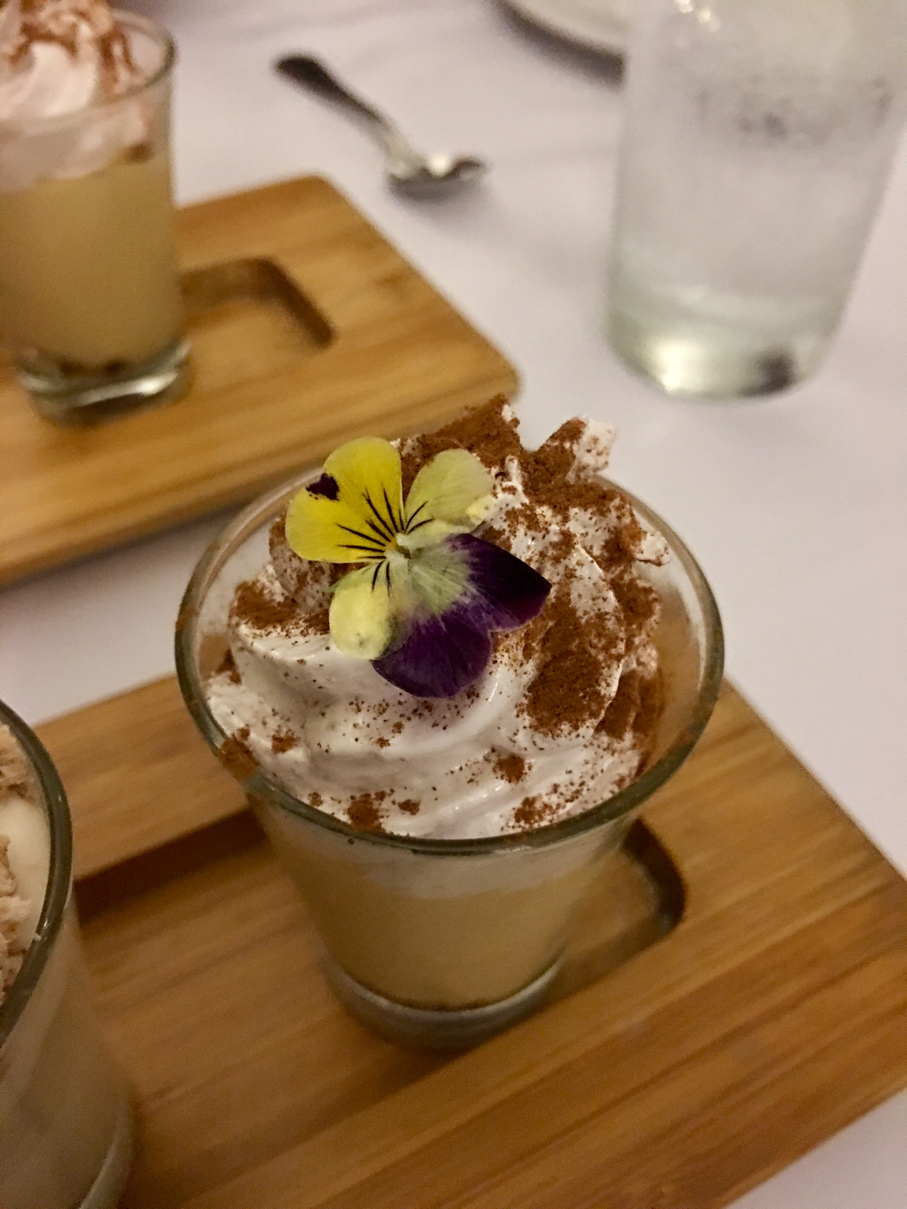 Here we are at the insistence of Lourdes, stuffed and satisfied. 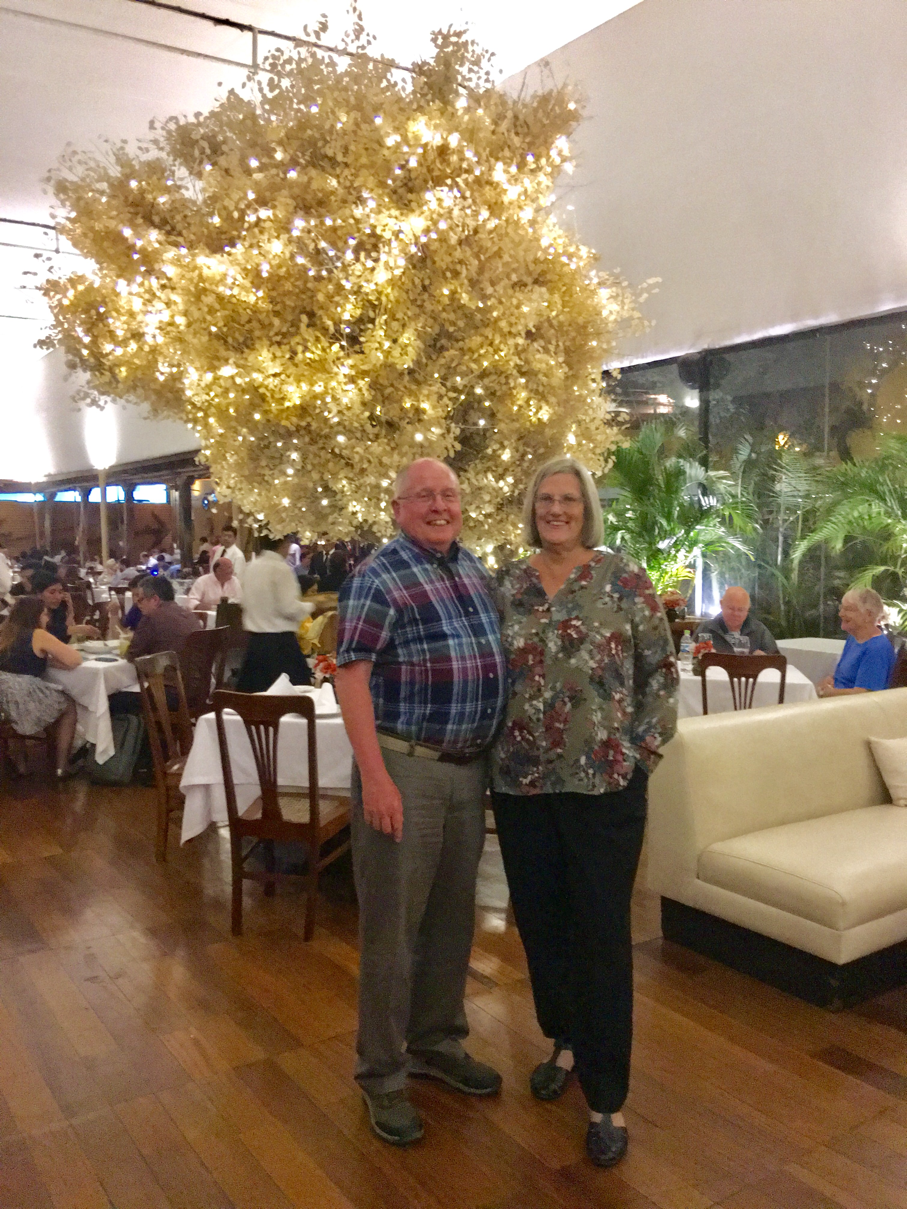 Our final stop was the vibrant Barranco neighborhood. 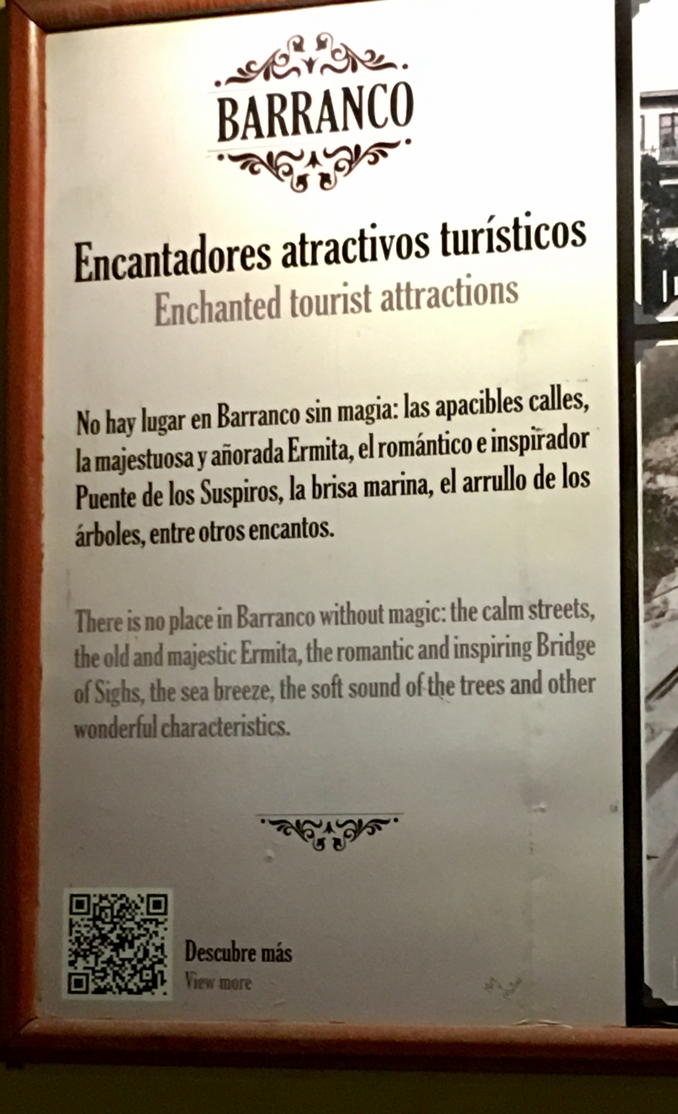 There we walked across the Bridge of Sighs, and indulged in a group selfie. 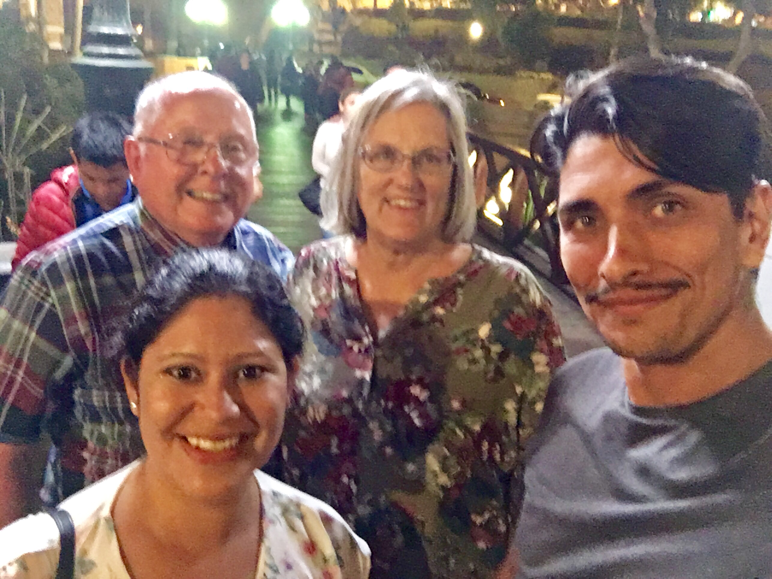 We found room for some elegant gelato at Crem dela Crem. While they specialize in local flavors, we stuck with chocolate, which after all is a "local" flavor in South America. 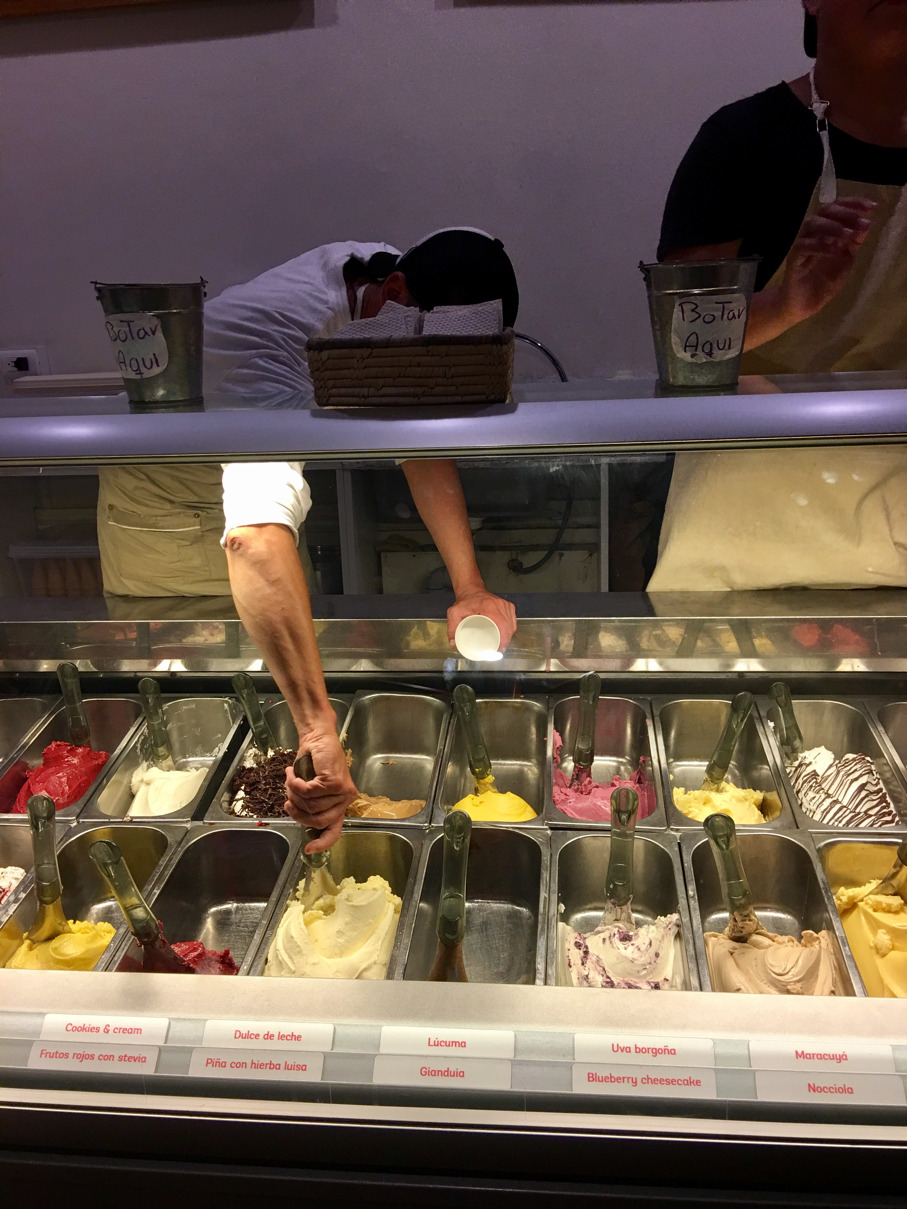 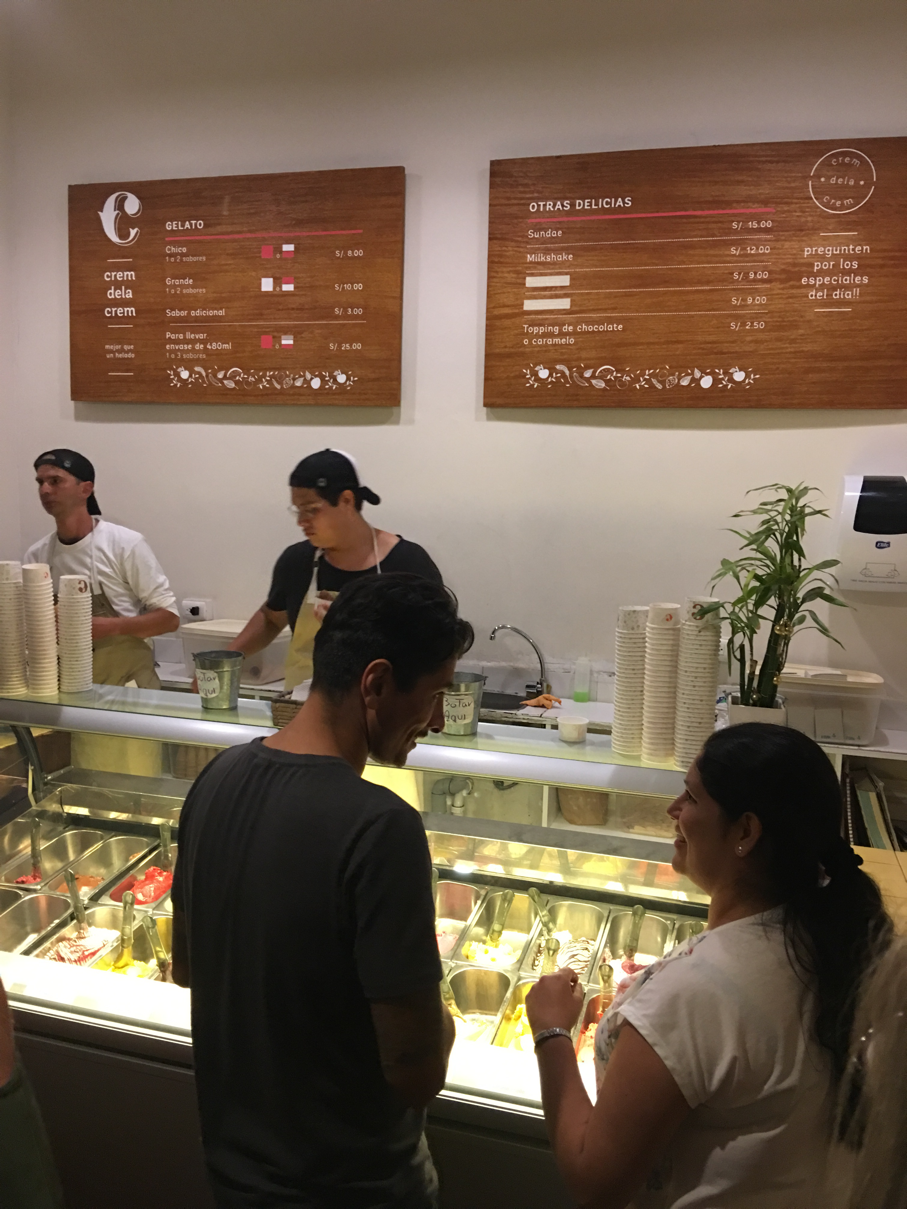 After a pleasant stroll for a few blocks on a balmy evening, rubbing shoulders with throngs of Peruvians who start celebrating the weekend on Thursday, which they describe as "Small Friday," it was time to head back to our hotel.
No breakfast needed Friday morning, after all of that feasting.
Posted by Kathy and Brian at 9:13 AM

Thank you for sharing your experiences in my country! Keep up the great work and inspiring us to travel and see the world. Hugs from Lima! Lourdes Montoya

Thank you Lourdes. What happy memories we have of Lima and our tour with you! Perhaps our paths will cross again.