Bangkok to Bellingham in Four Flights

We picked up a bargain business class fare from New York to Bangkok, so our itinerary includes repositioning flights to and from New York.
Using airport codes, it’s BKK-HND-JFK-SEA-BLI, or Bangkok to Tokyo Haneda to New York JFK to Seattle to Bellingham, with an overnight stay at the JFK Airport Hilton.
We started off the return trip with an AOT Limo ride to BKK in another sporty little Isuzu SUV.
Night has fallen as we arrive, but we catch a glimpse of the world’s tallest control tower at 132.2 meters or 433.73 feet in height. The terminal itself is similarly huge, with all of it under one roof. 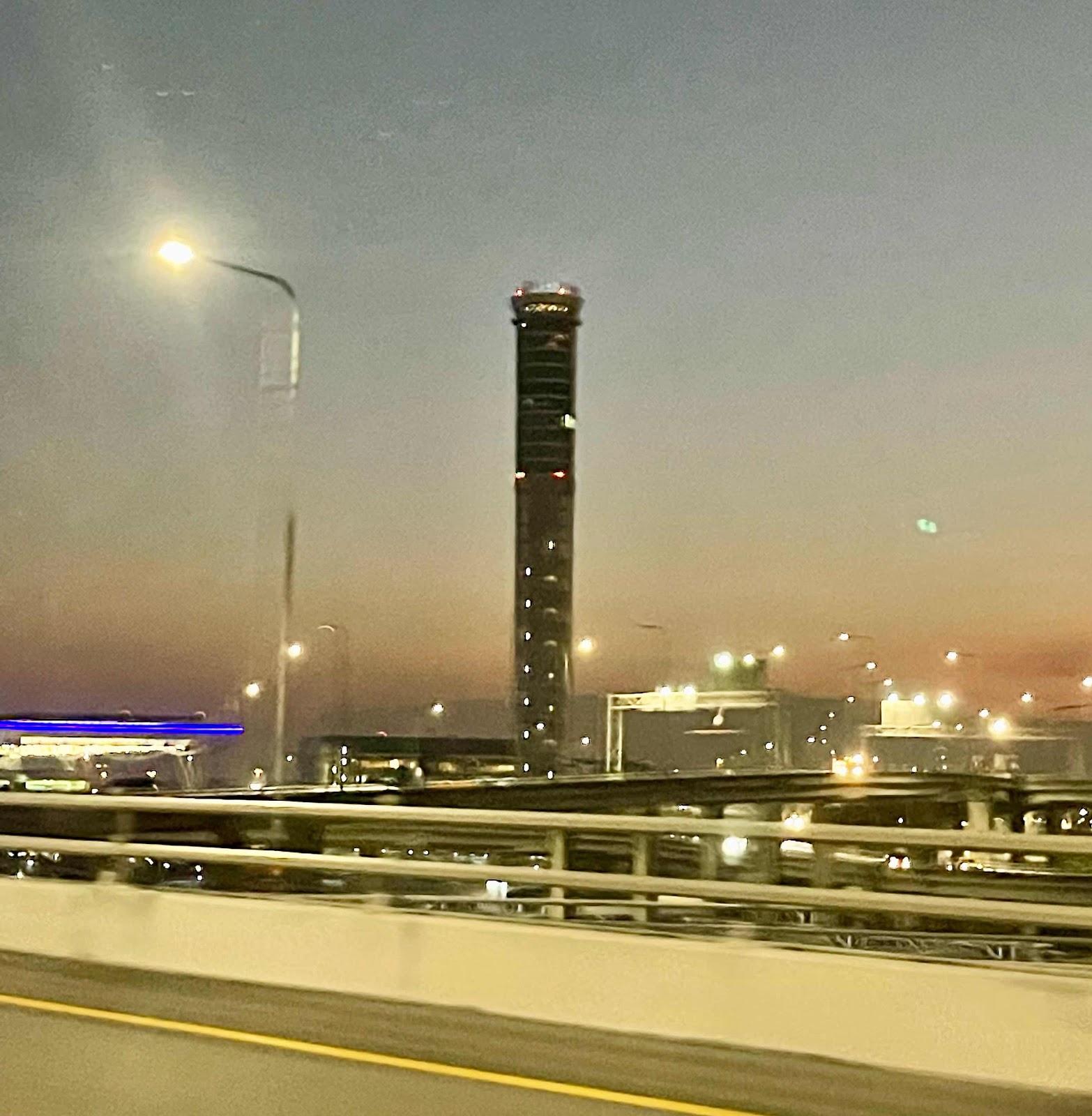 We checked in as soon as the JL (Japan airlines) counter opened,!then making our way to the luxurious Qatar Lounge just in time to order dinner before its 8 PM closing.
Kathy’s duck and Brian’s lamb chops were both outstanding, preceded by a shared sushi appetizer. 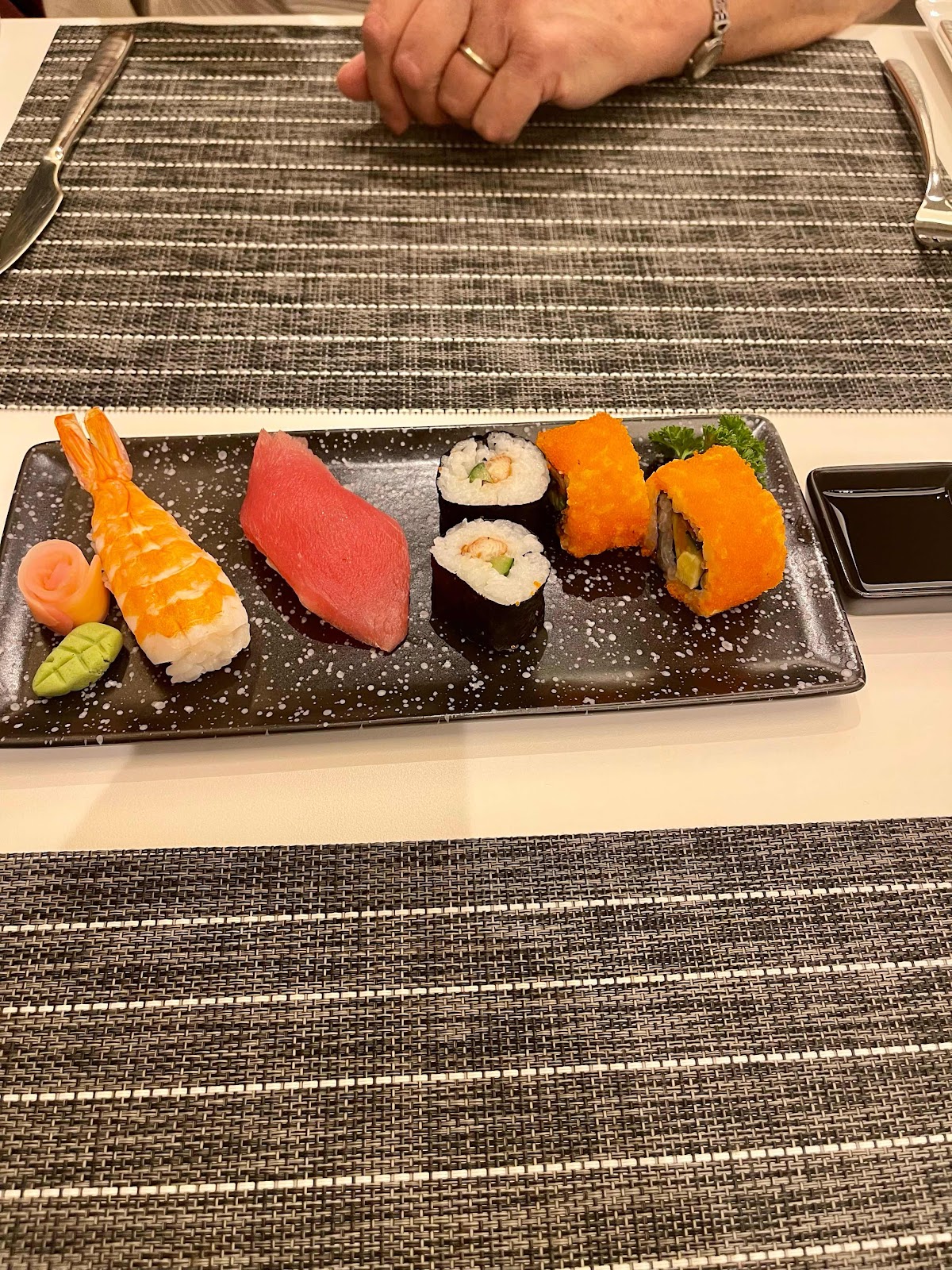 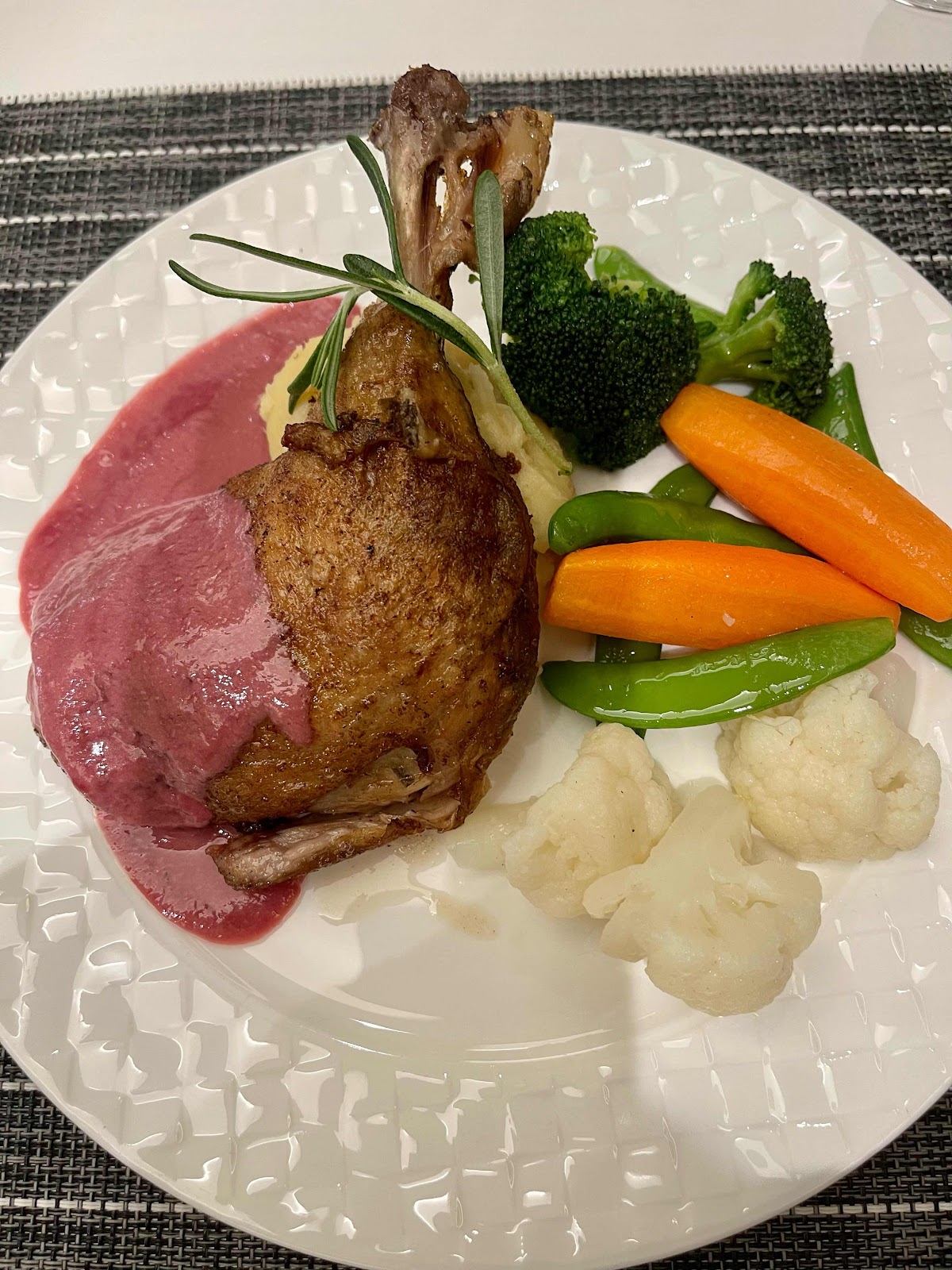 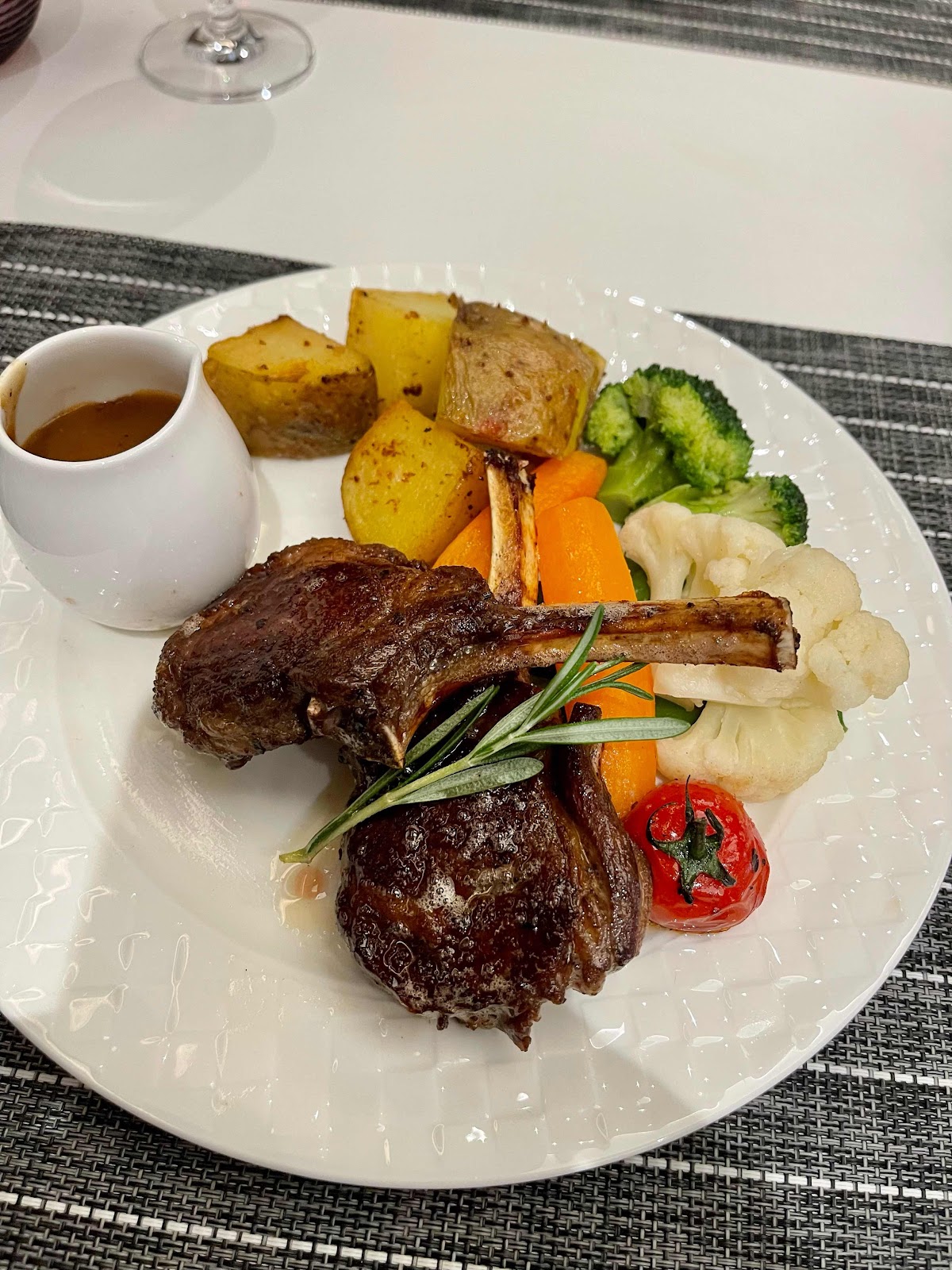 We washed it down with Gosset Grand Reserve Champagne and a Stag’s Leap Merlot.
We then made our way to the Japan Airlines Sakura Lounge, by far the weakest lounge of our  trip. Are we spoiled? Yes, and loving it, as Maxwell Smart used to say.
The five-hour flight BLK-HND in a 777 was likewise anti-climactic. We found the seven-across 2-3-2 seating crowded, and with extremely limited storage space, even for glasses and phones. 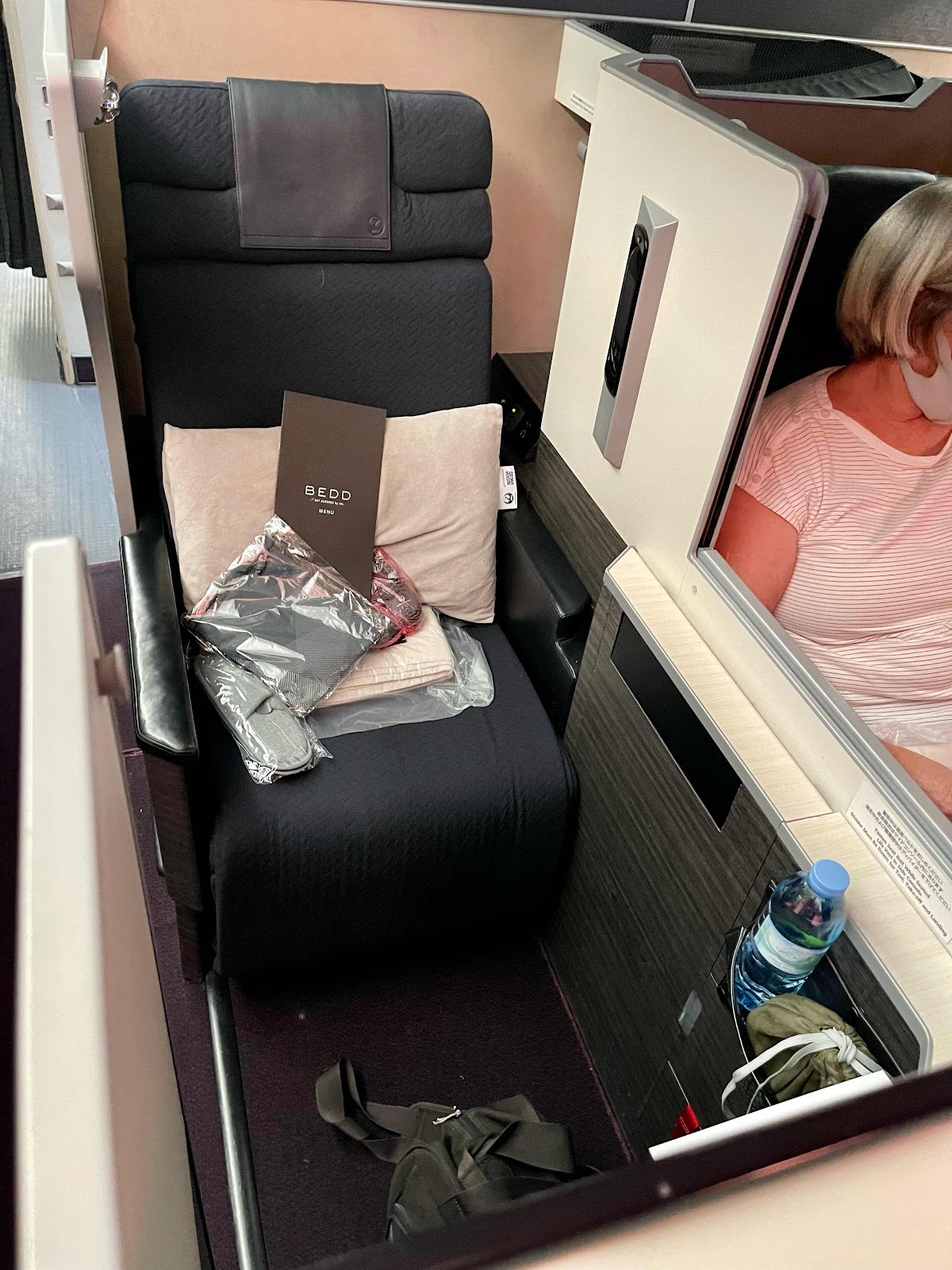 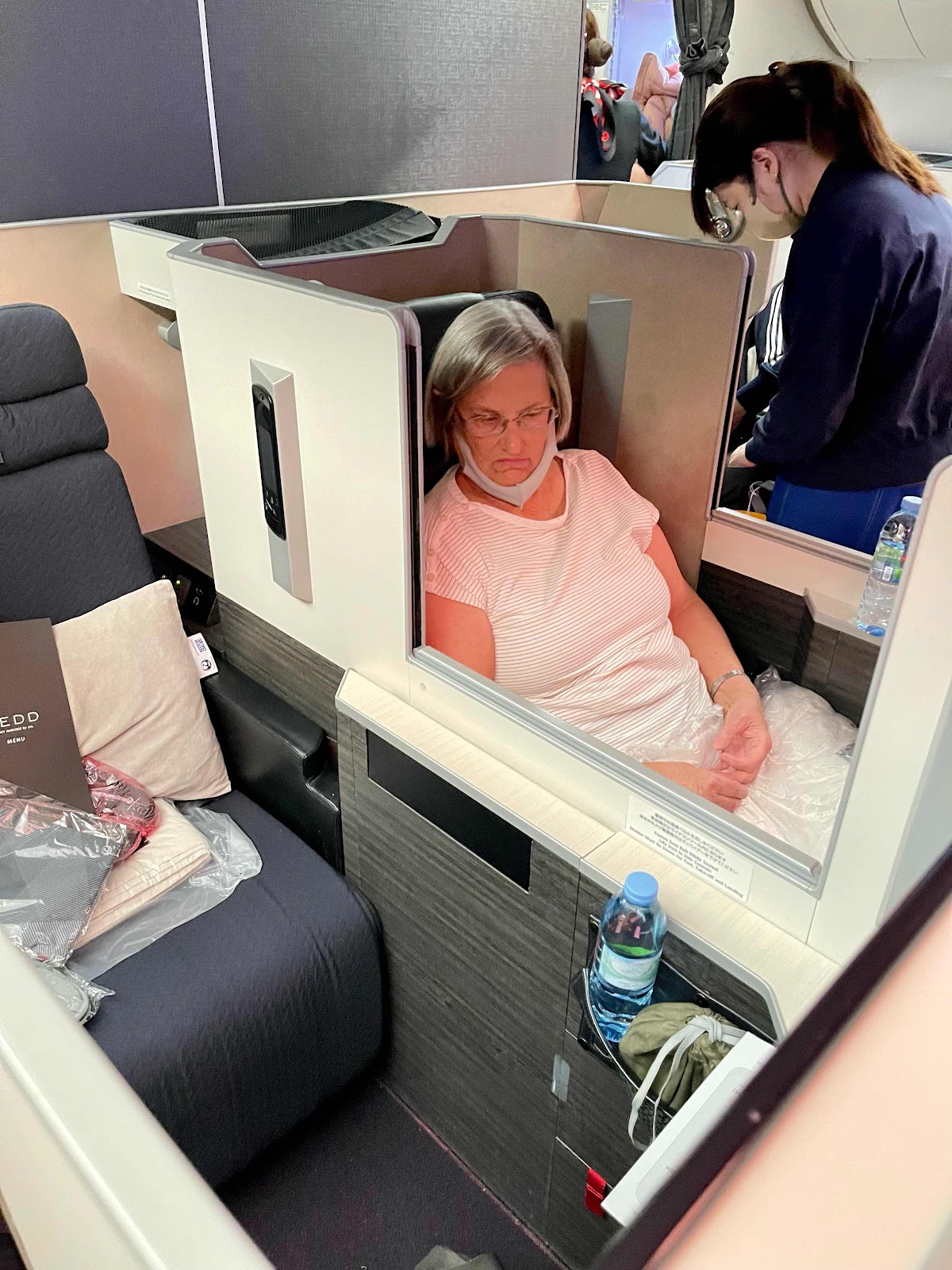 We can’t comment on the service or food, because we slept in our masks from just after takeoff to a little over an hour before landing. We’ll try them out on our 12 1/2-hour HND-JFK flight. On this trio we’ve previously flown American and Qatar business class. We have to conclude the JL seats are significantly inferior.
We’ve seen other opinions far more positive, like this one:
https://thriftytraveler.com/reviews/flights/japan-airlines-business-class/
We’ll definitely climb aboard JL 6 with an open mind.
Being in-transit passengers, we did not have to clear immigration, but instead went through security painlessly and found ourselves outside the JL First Class Lounge shortly before its 6 AM opening.
It’s quite a place, and fortunately our OneWorld Emerald status gives us entry. 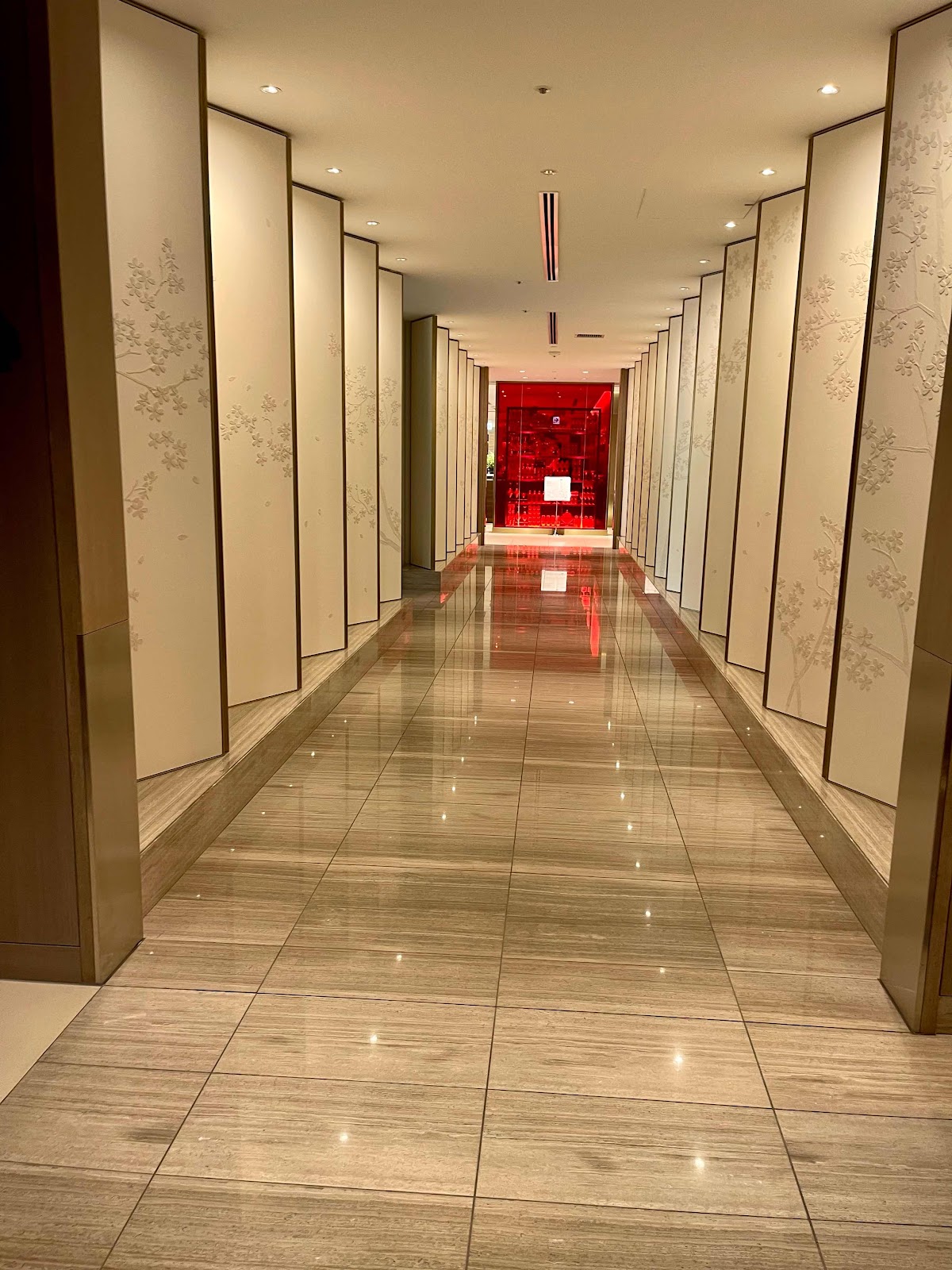 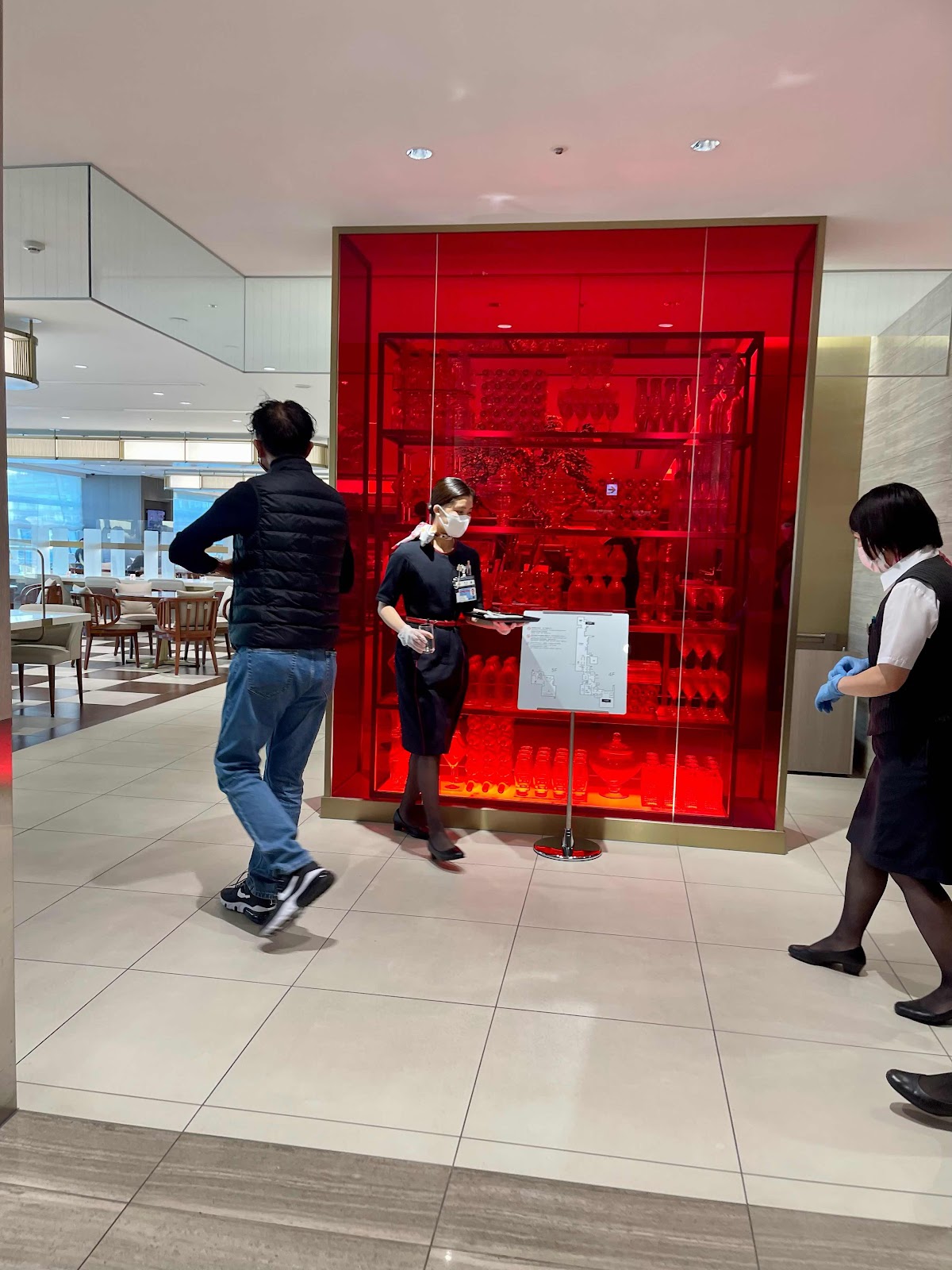 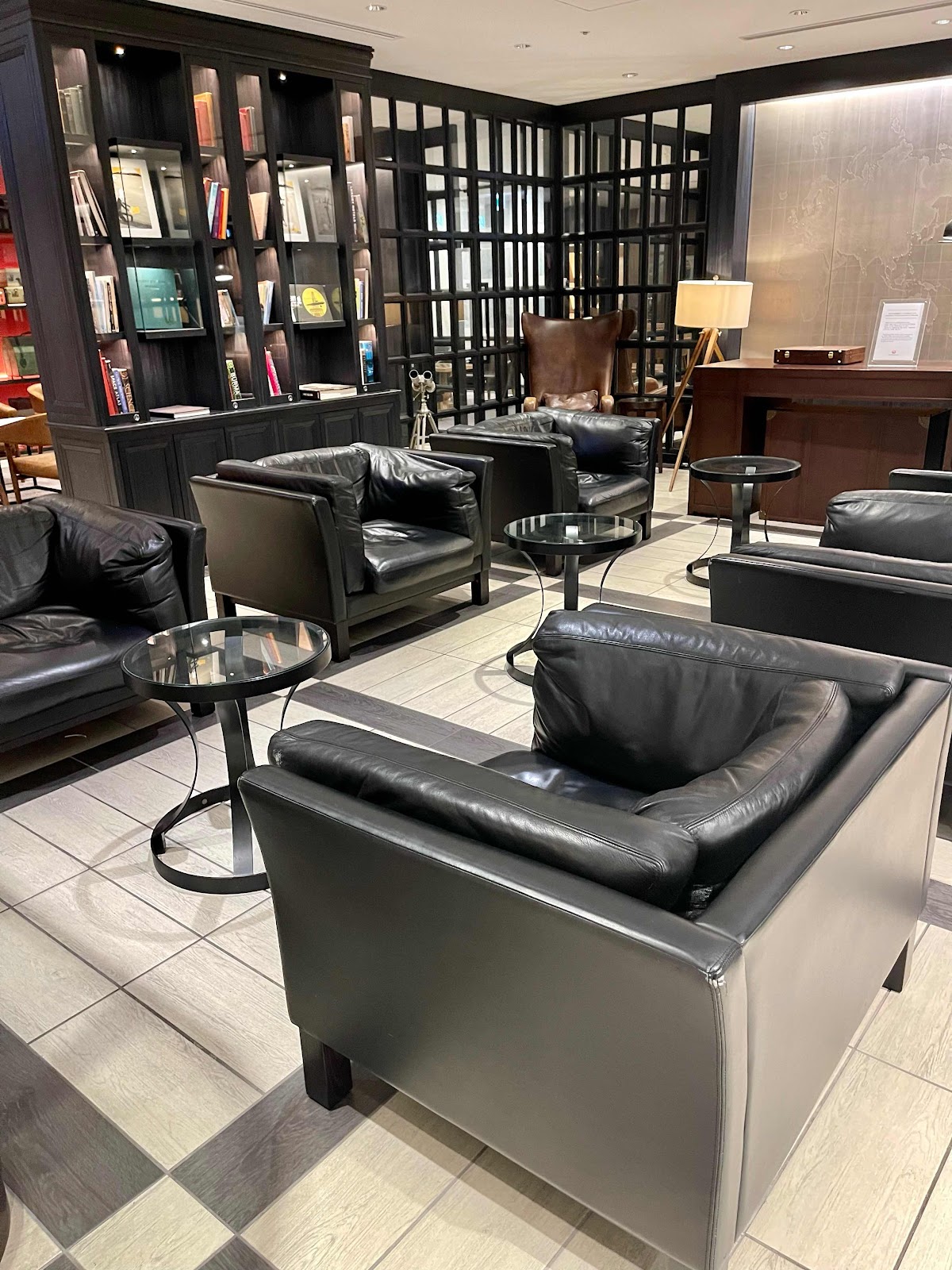 It includes a large dining area. 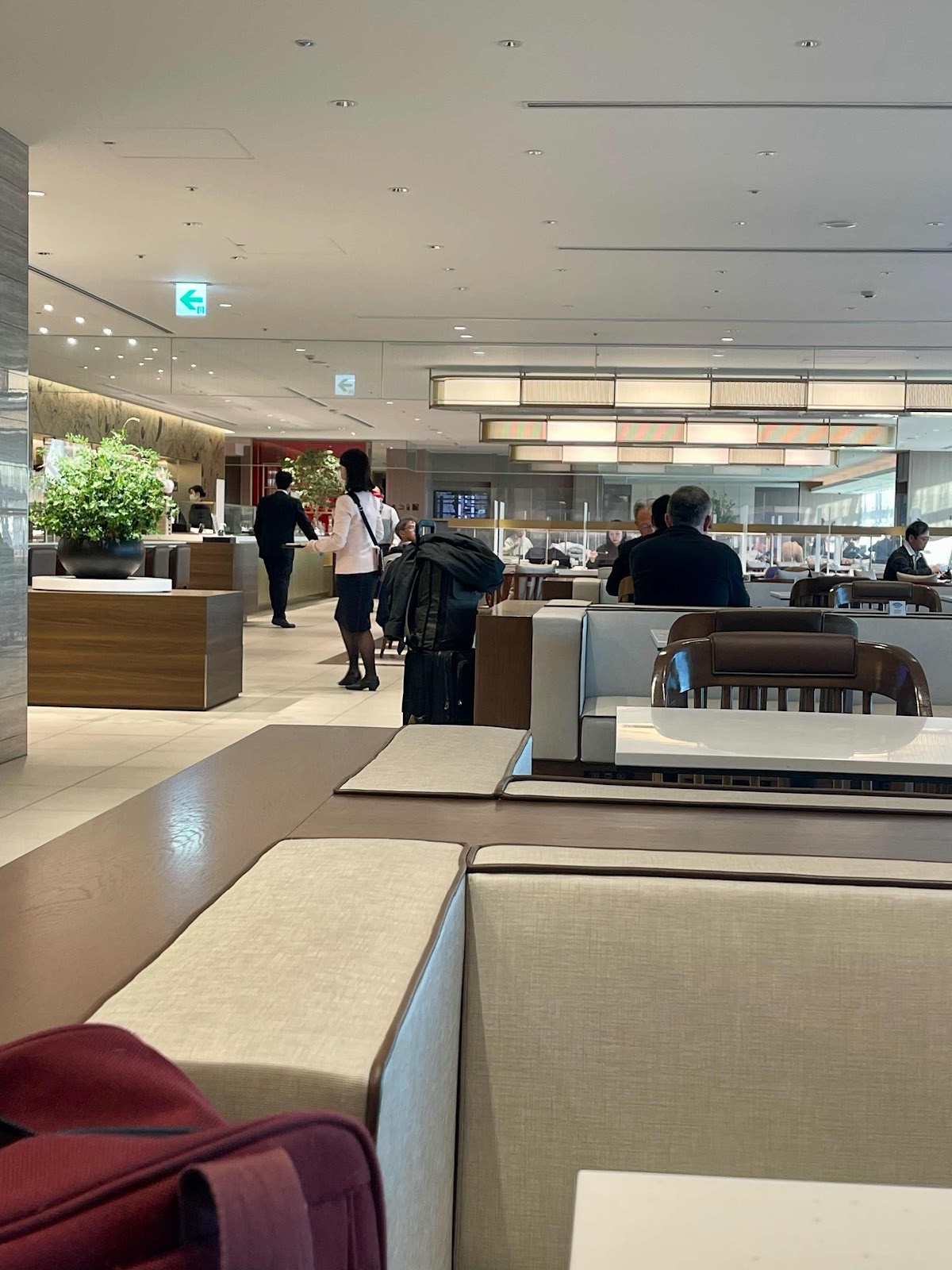 As in some other lounges we’ve visited, you scan the QR code on the table to order from the menu and have it delivered to your table, using the lounge app. 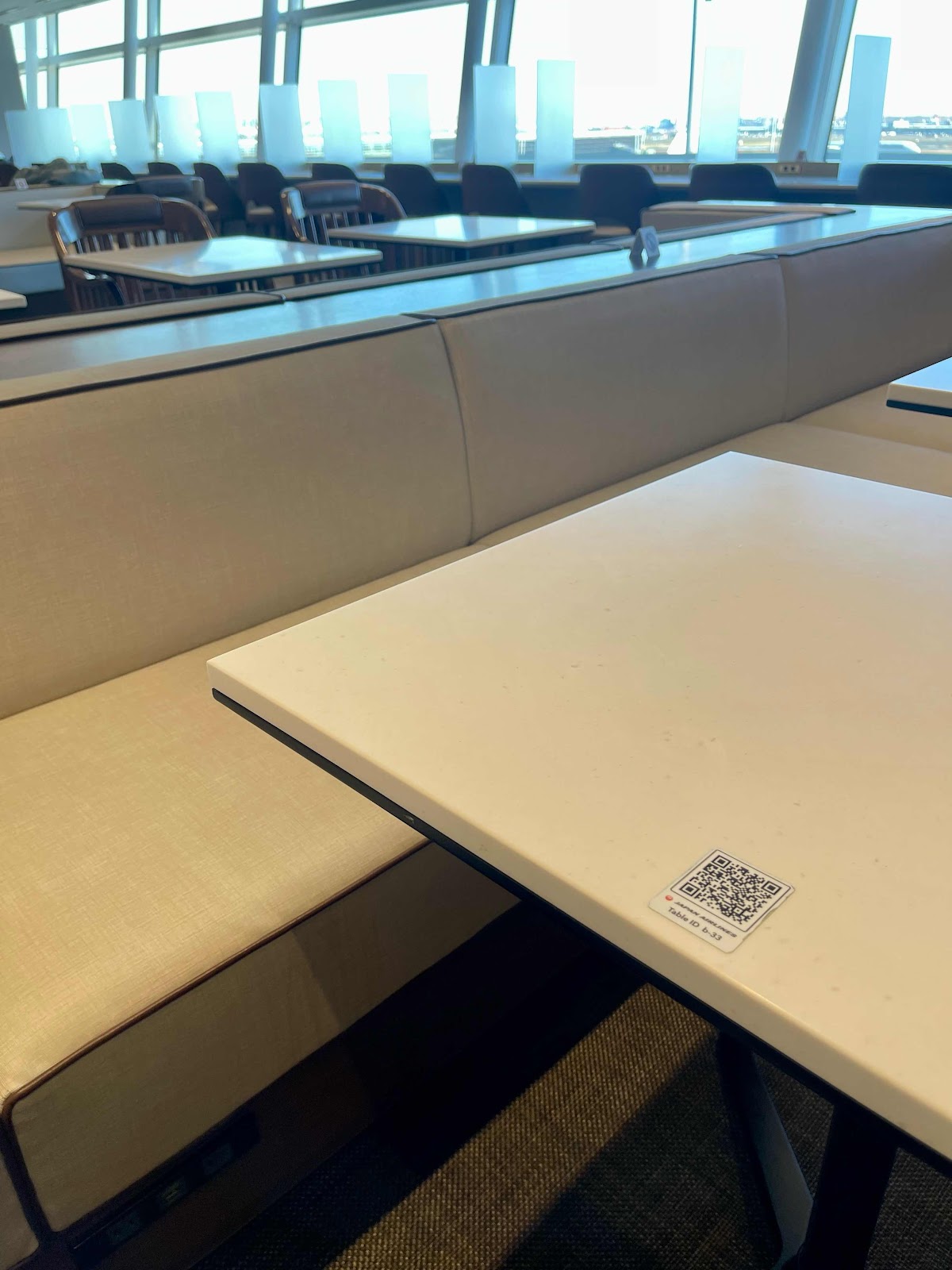 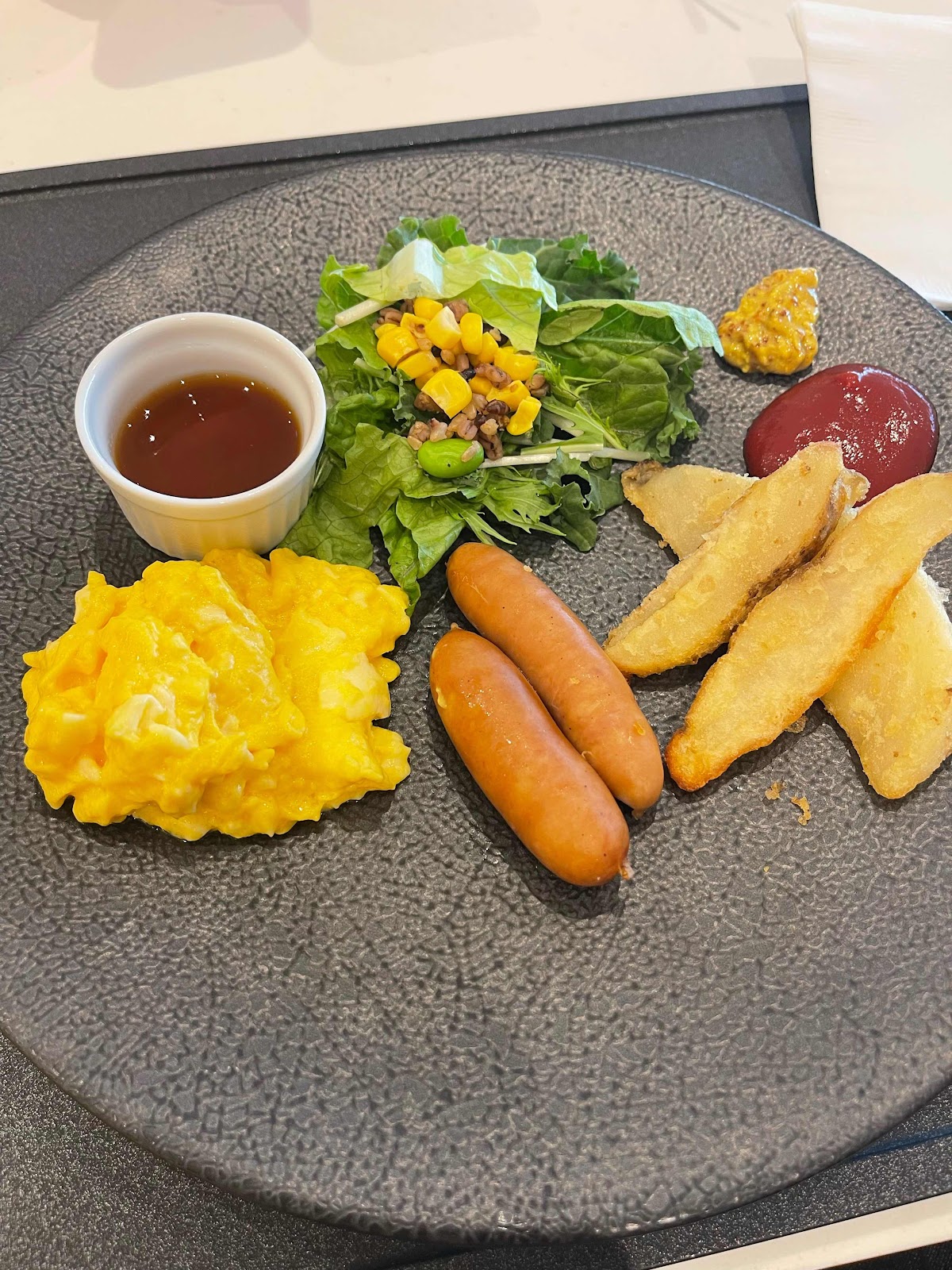 Kathy ordered Ramen. What else? 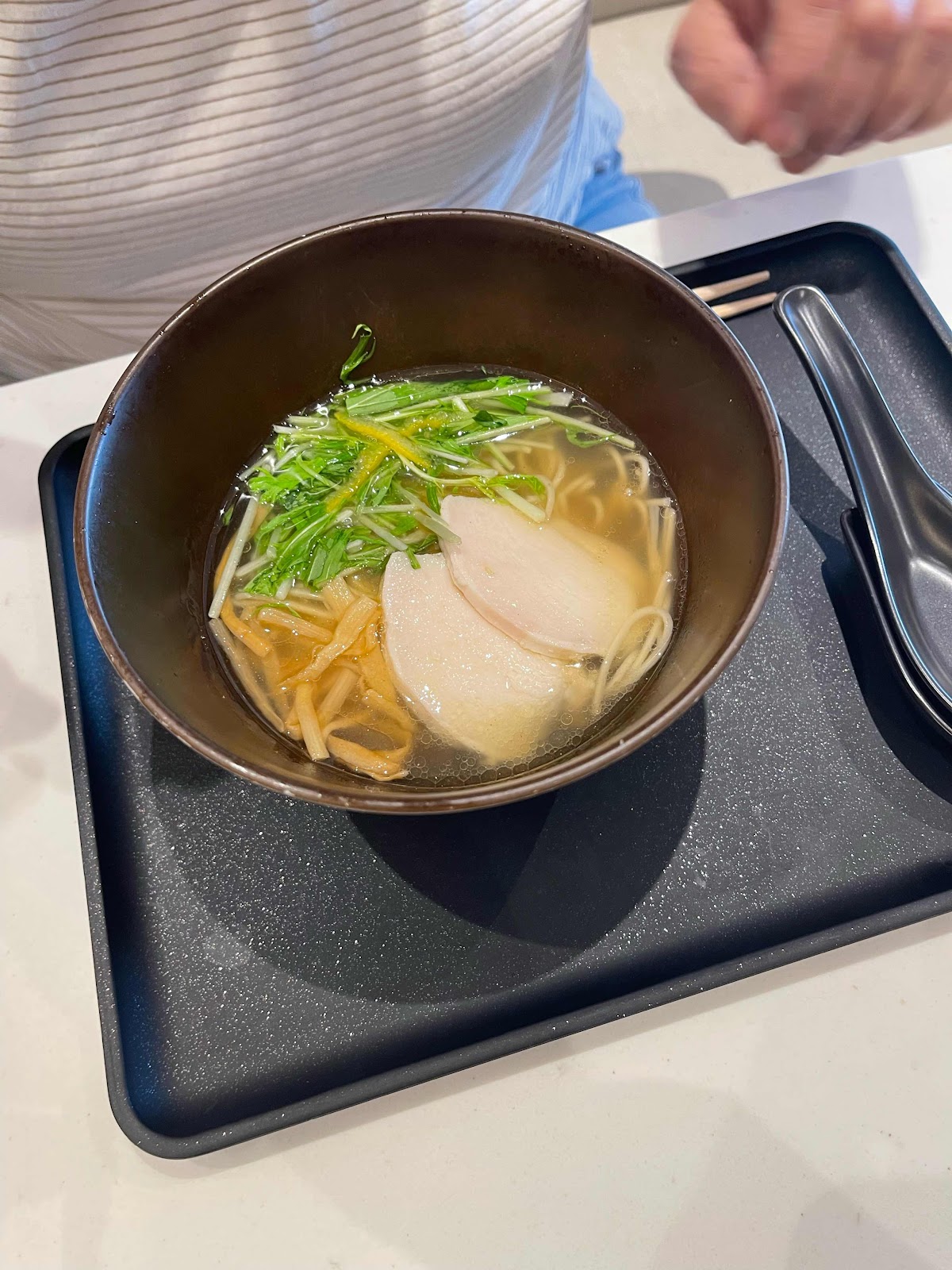 There’s also an impressive collection of self-serve hard liquor, but it’s a wee bit early in the day for us. 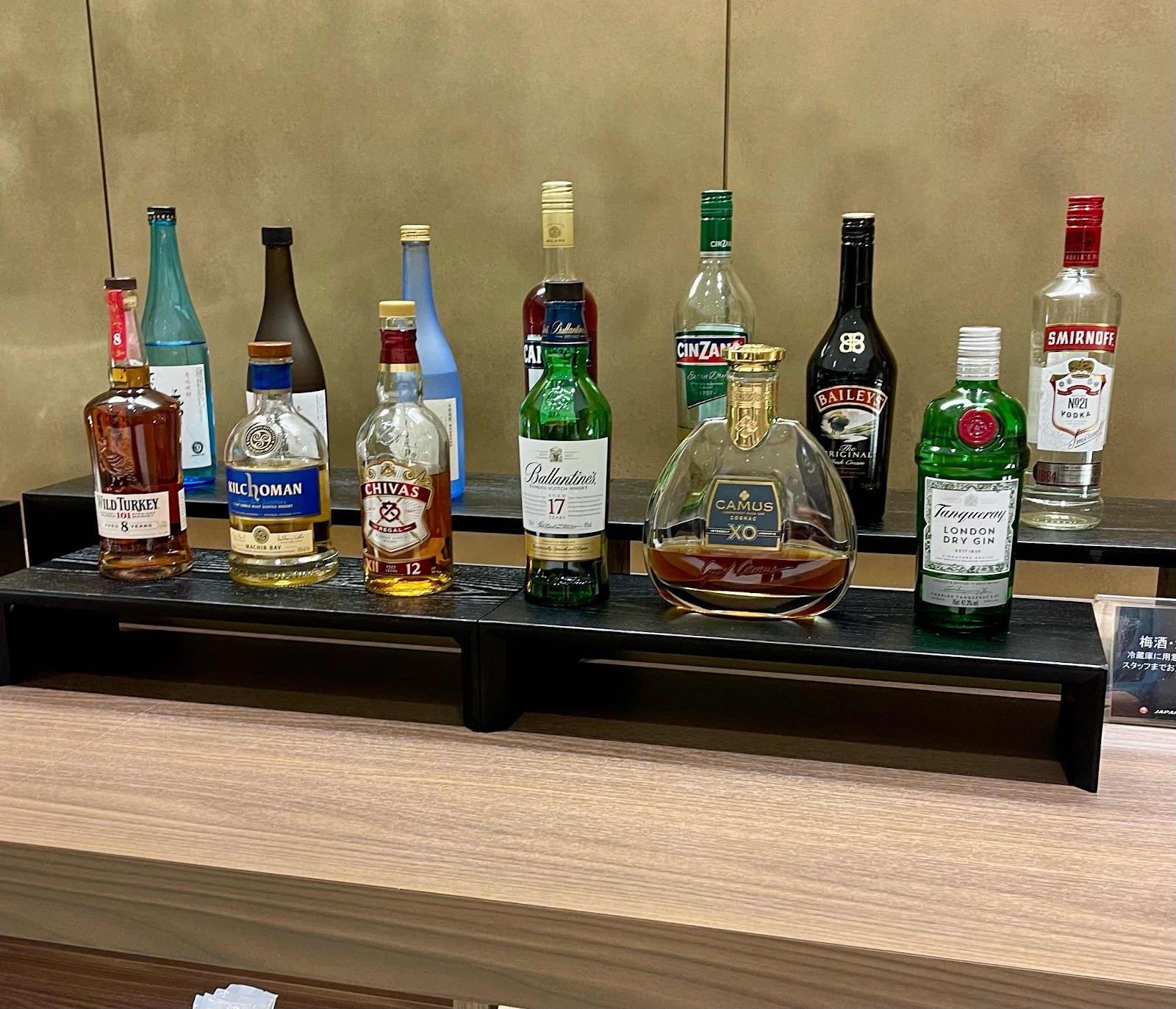 Brian booked a shower instead and found it
quite refreshing. We’re fading a little bit - four hours of sleep will do that - so we’ll have to keep ourselves awake with plane spotting and runway views until we board. 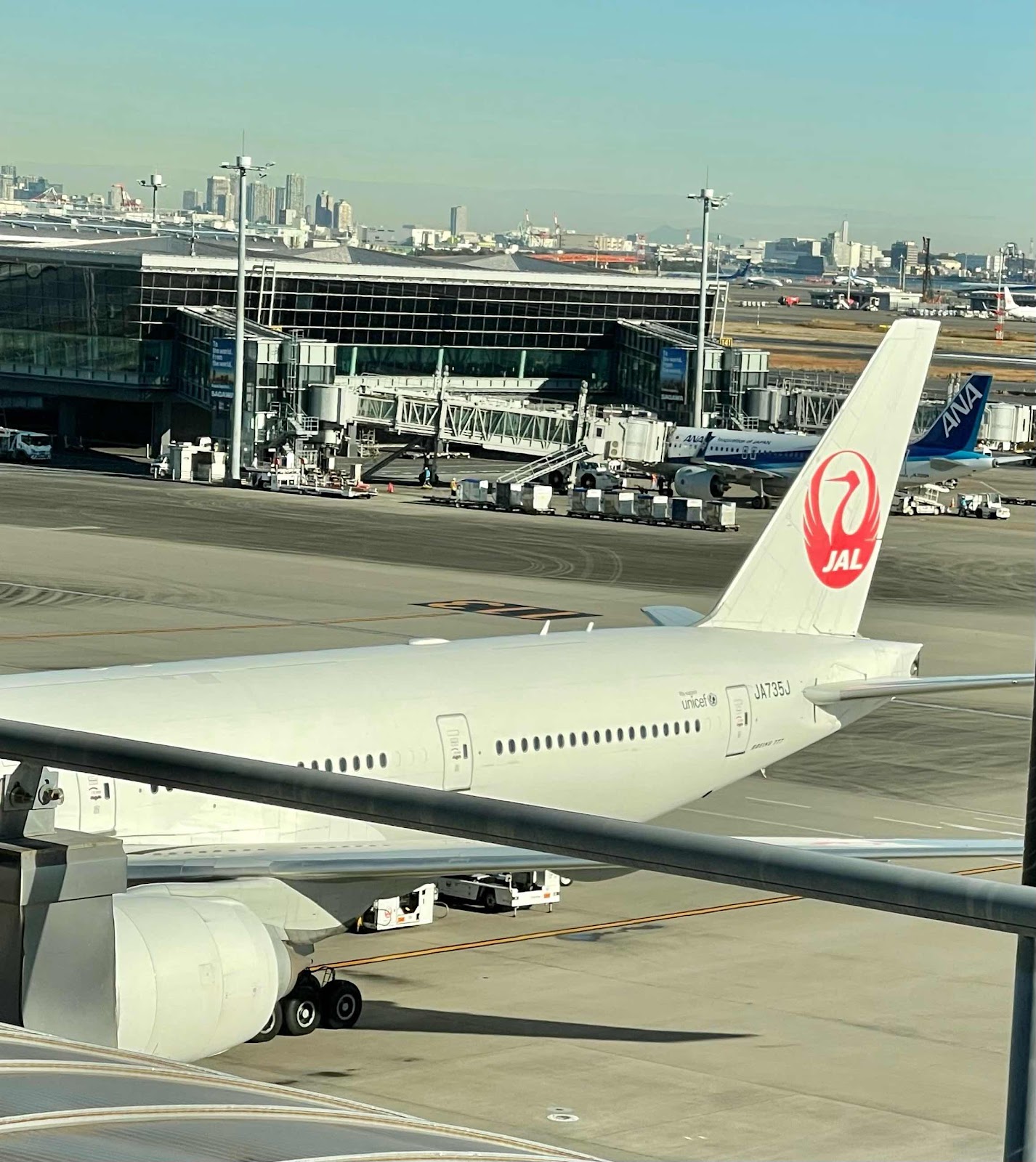 We were the very first lounge customers at 6 AM, and it remained quiet for the first couple of hours. As we prepare to depart for the nearby gate, we see it’s being well used, but definitely not overcrowded. 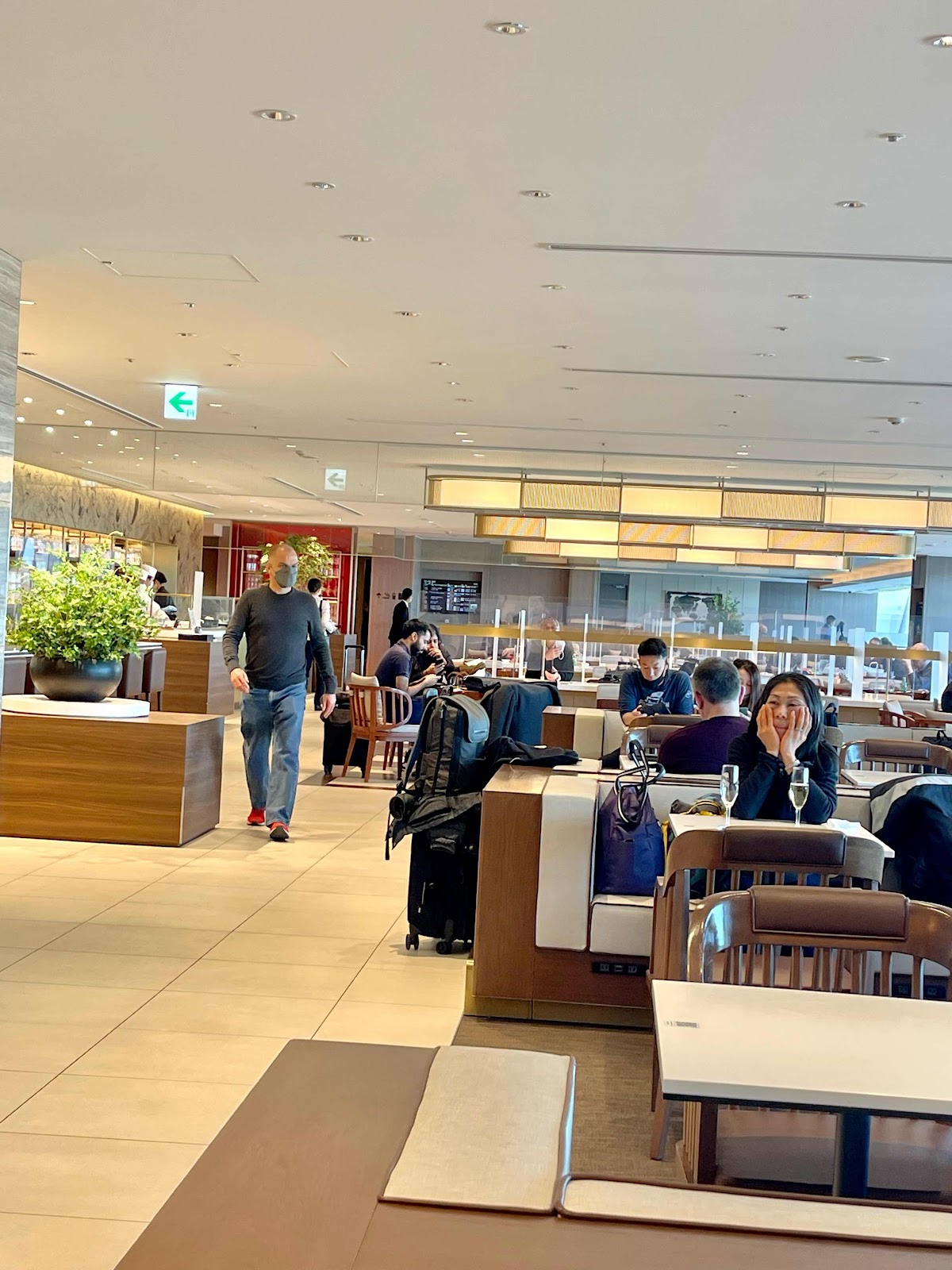 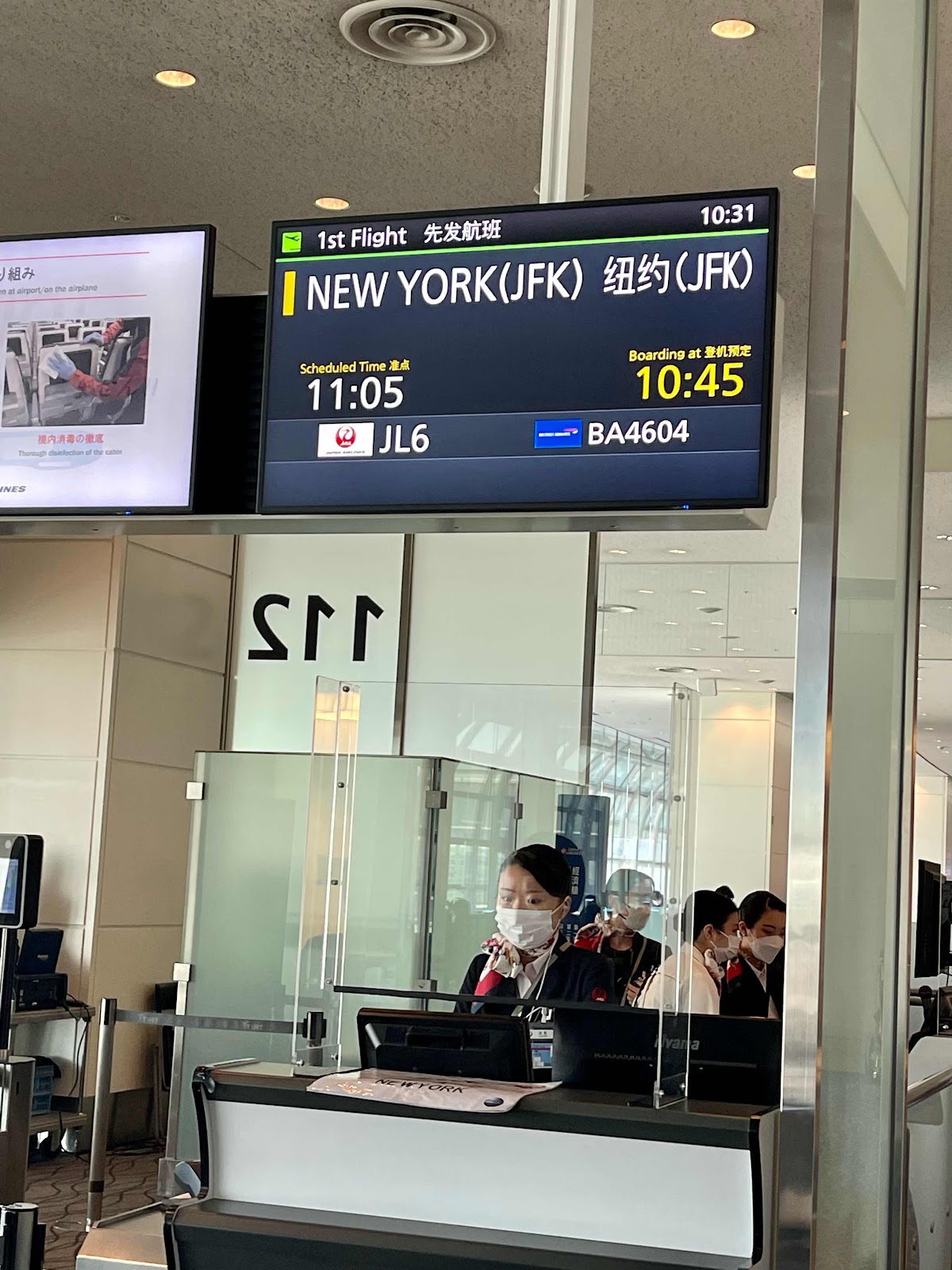