We said our sad goodbyes to Sue and Bill drove us to the airport in their rental car, where we said more sad goodbyes.

Checking in at the SQ Business Class counter was efficient and before we knew it we had presented our exit documents to the Australian authorities and were on our way through security.

We managed to get in a line with a metal detector functioning, although we're not nearly as concerned about the millimeter-wave scanners that Australia has now made mandatory (when you are directed to one) as we are about the back-scatter X-Ray scanners.

It took three times for Brian's carry-on to go through the X-Ray. We know what it probably is, a tiny flashlight on his now-ancient key chain that no longer works, but that looks like something threatening.

We were warned that the PER Silver Kris Lounge is small, and that it is, although there's a temporary wall on one side with hopeful signs - CONSTRUCTION WORKS IN PROGRESS - prominently posted.

If it weren't for the quite tasty food, that includes sushi, curried beef, and braised pork, we would suggest it has the charm of a slightly upscale bus depot.

Given it's Silver Kris, we're surprised the bubbly wine is from Tasmania rather than France, but it still tastes good, and we toasted Bill and our Sue and our entire marvelous experience these past couple of weeks.

Next stop SIN, i.e. Singapore for anybody in doubt what that means. 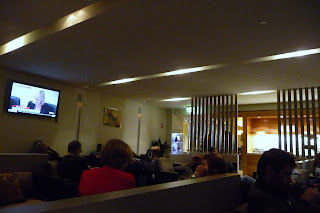