Sunny Sydney: Here We Are

Nothing less than a great flight in Executive Class on Air Canada. Strange as it seems, we often land feeling more rested after a 15-16 hour flight than we do after a 9-10 hour flight - the trick is to be doing it in lie-flat Business Class seats! 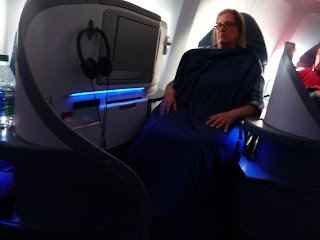 The only nuisance was that the Australian authorities demanded that AC spray "non-hazardous" bug spray in all of the overhead bins. We covered up our noses and mouths for awhile as we watched the spray settle in the morning and it's our first experience being sprayed here, although it's apparently not uncommon.

We've formally entered Australia rather than transiting and then sitting in a lounge for 8 hours (our flight to Auckland doesn't leave until 6:40 p.m. local time and it's only 9:30 a.m. here.

We're soon taking the train into downtown to meet up with Flyertalk friends, Ben and Trisha, at the Opera Bar, in the shadow of the Sydney Opera House.

Our luggage is checked through to Auckland and we're just carrying our bags looking forward to a sunny Fall day in this beautiful city.