Yes, Even Asian Airport Lounges Can Be Dismal

What, you say, looking at these photos of the lovely and fairly deserted Asiana Lounge, where we visited with Tom and Ellyn on our previous trip to Seoul?

We remember Tom in particular turning up his nose at the food offerings, and today we have to echo his complaints, especially after the beautiful buffet spread (and we hate that word, reminding us of the "spread" that "spreads" cause) in the SIN SQ Lounge.

This is also a contract lounge for other airlines, and it's as if they're working hard to keep the costs-per-entry contained. The best offering was the Korean bowl-of-noodles soup, and the first runner-up was the bowl of pretzels and peanuts that Brian artfully assembled.

Kathy tried but did not finish the mushroom soup, and the spaghetti with "beef from Australia" looked wilted enough that we suspect the entire dish had been imported from Oz.

Ah well, as the current cliché goes, it's a First World Problem, and we'll look forward to some Air Canada delicacies on our upcoming flight as we while away the time by admiring the faux-library that forms one wall and wraps around two others. 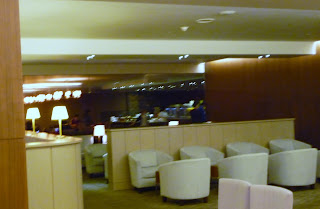 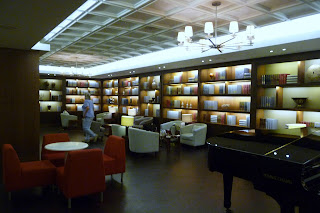 Brian "peruses" a "book" from the "library." Oddly enough, many of the books on these shelves share the title Sketches by Boz of Dickens. 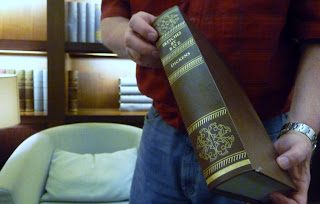