It’s fortunate for us Blane has been such a co-operative and congenial traveler. Our trip has featured unpleasantly hot weather almost everywhere and no shortage of crowds.
We’ve experienced our travel glitches as well, from missed buses to pickpockets. Today provides one example.
We walked to the Salzburg Hauptbahnhof. Our regional train arrived late but left on time. Still, there were delays. German police boarded at the first German station and demanded ID from everyone, presumably looking for “migrants.” We then
sat on a siding waiting for other trains to pass.
Kathy kept getting conflicting messages about our connecting train at Munich. It was close enough to try. We walked briskly from the regional train tracks at one side of the station all the way to Track 18. The train was still in the station, probably part of the rolling delays. Our First Class Car 11 is at the other end of the platform.
We started at Car 1 and bailed about Car 8 or 9. The whistle blew and we’d made it aboard. It was a relatively easy task to trundle our bags through to our seats in Car 11, politely kicking out a young man who must have chosen a four-top to impress his girlfriend. He’s spent most of the trip yammering on his phone, and Kathy and Brian exchanged some snide messages with each other.
The couple got off at Stuttgart and the passenger taking one of their seats started to talk as well. Oh my. Now he’s just tapping on his computer. We’re getting off at Frankfurt Airport in less than an hour and our travel day has been an easier experience than it might have been. 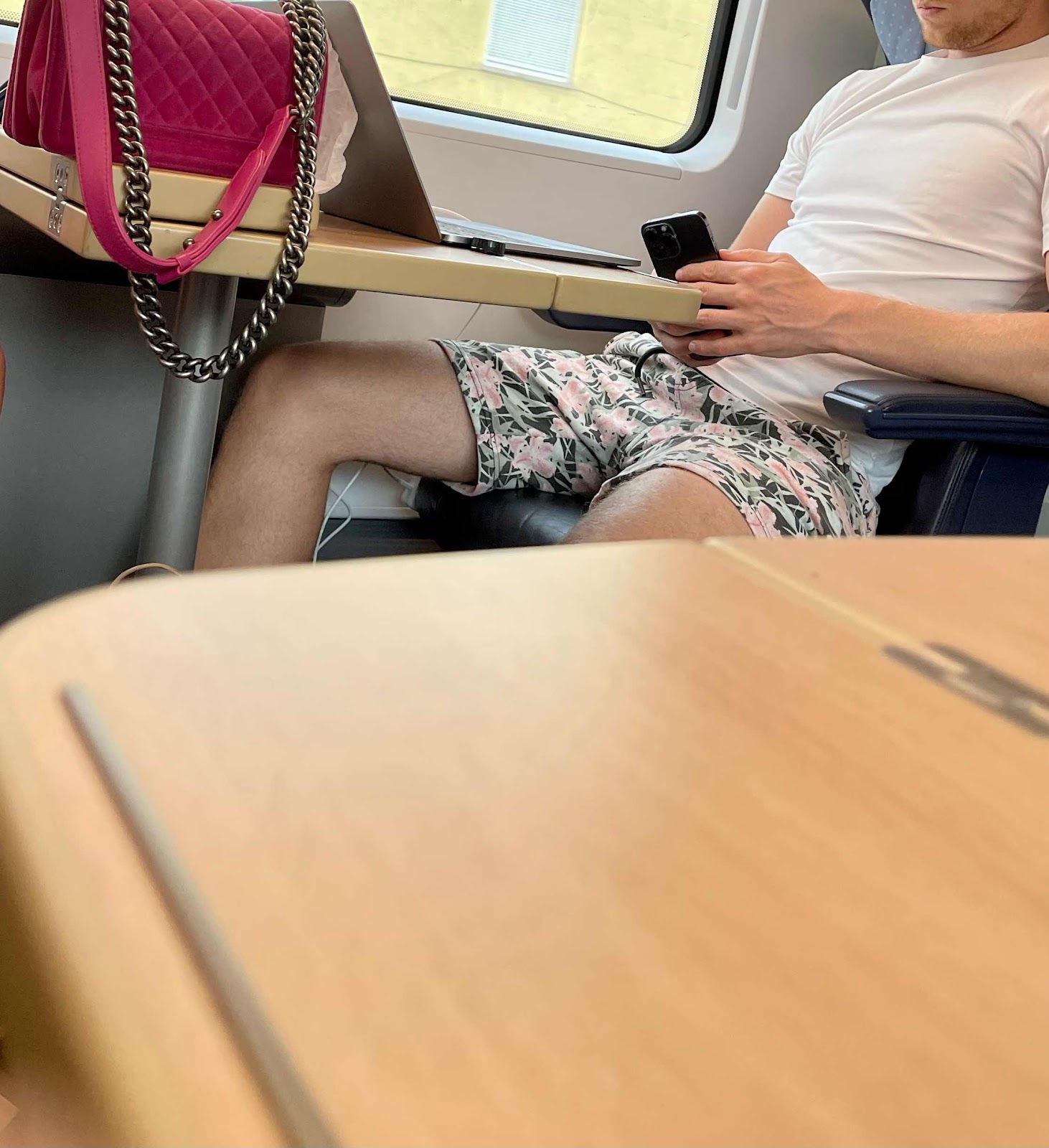 Nonetheless, we’re nicely ensconced in our First Class seats, and Kathy just brought Blane back from the dining car with a snack. 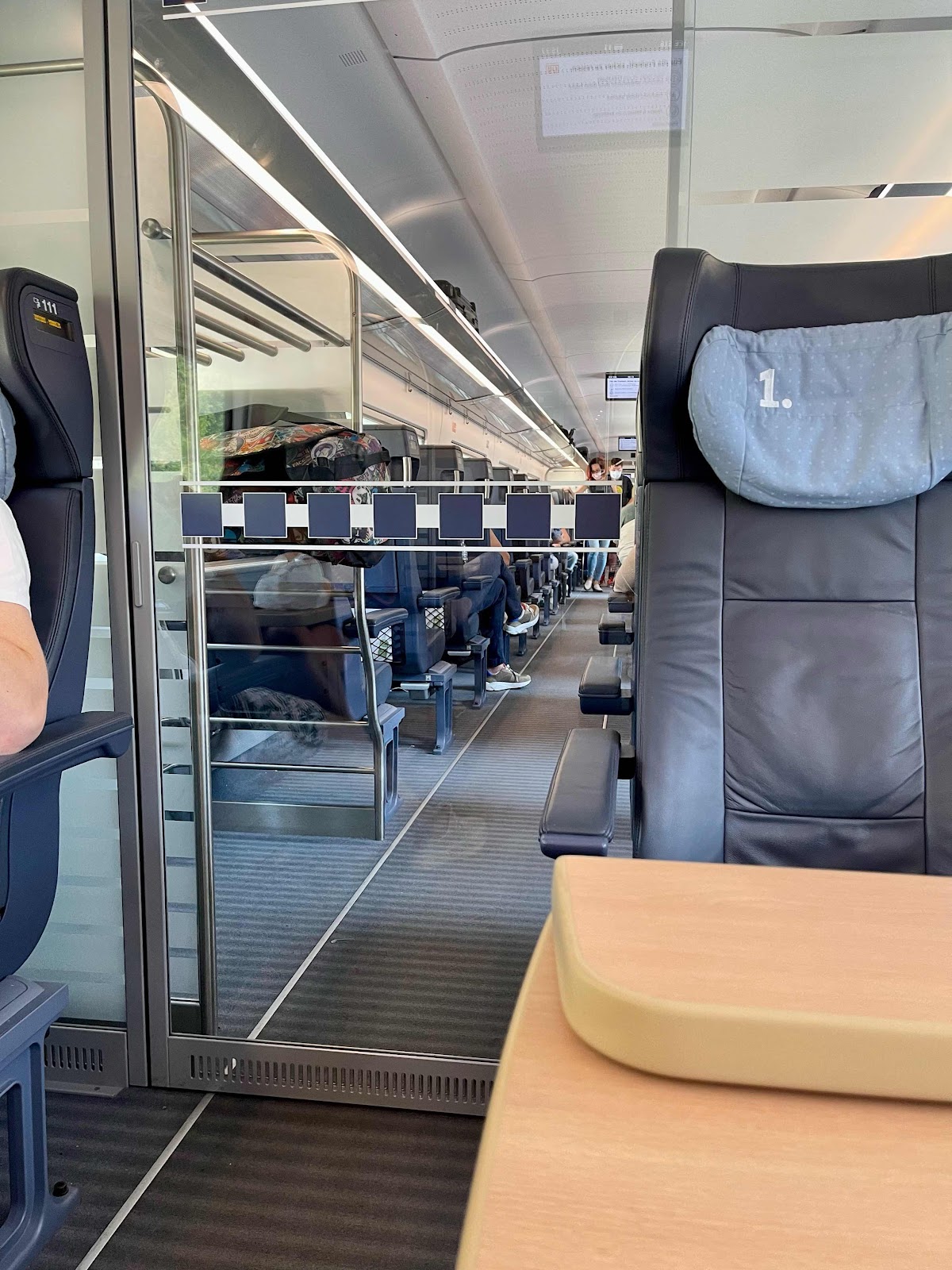 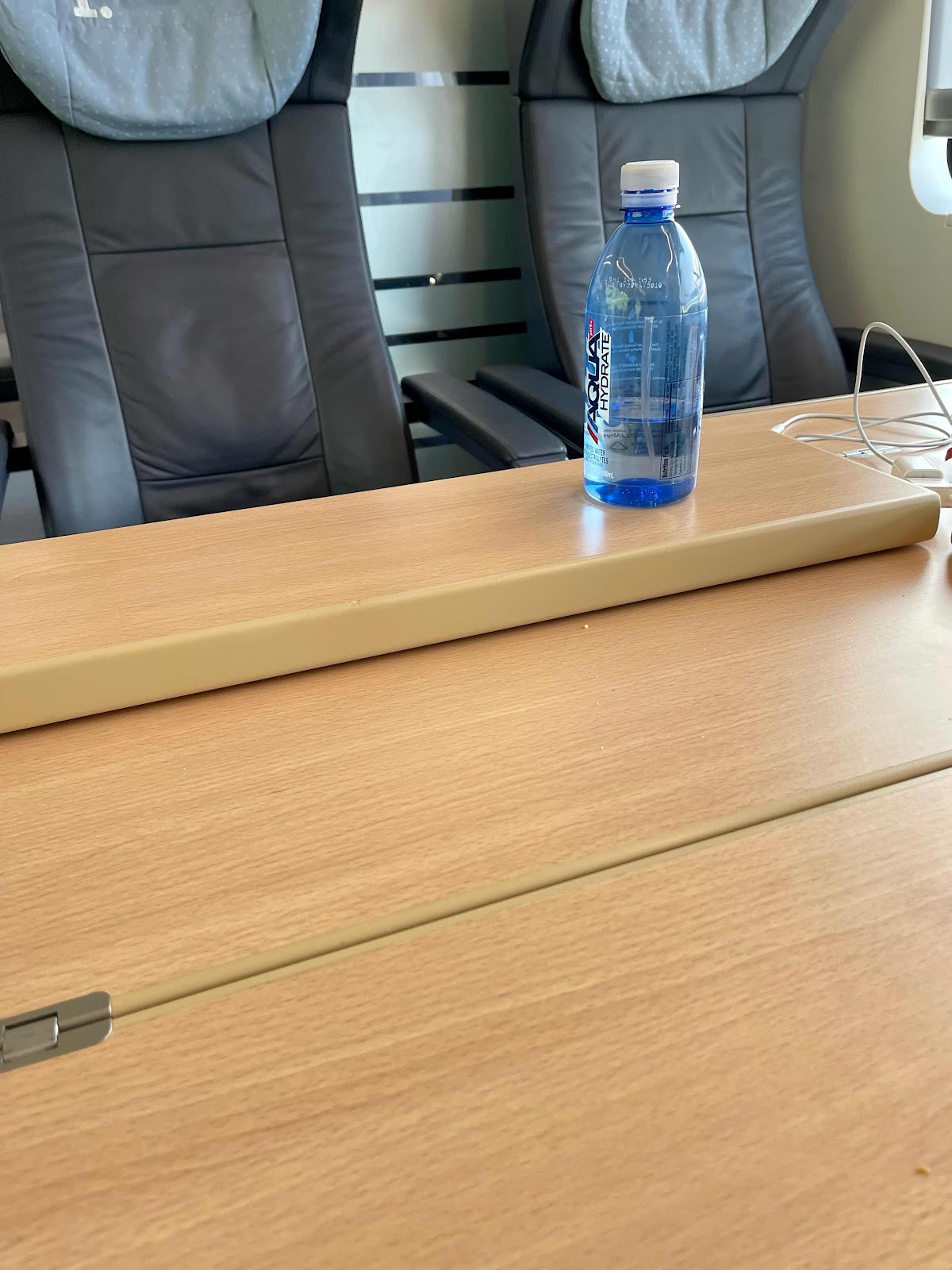 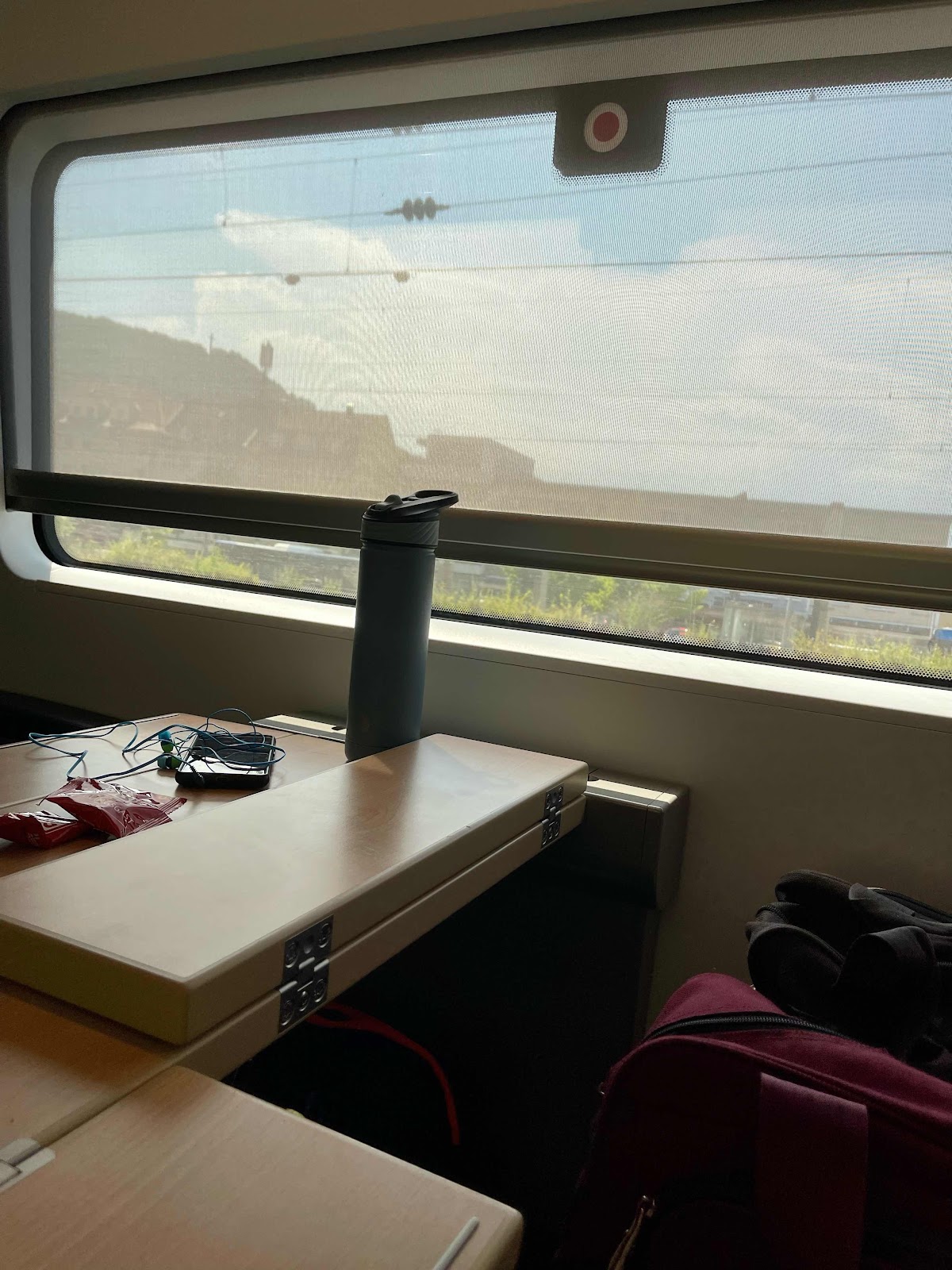 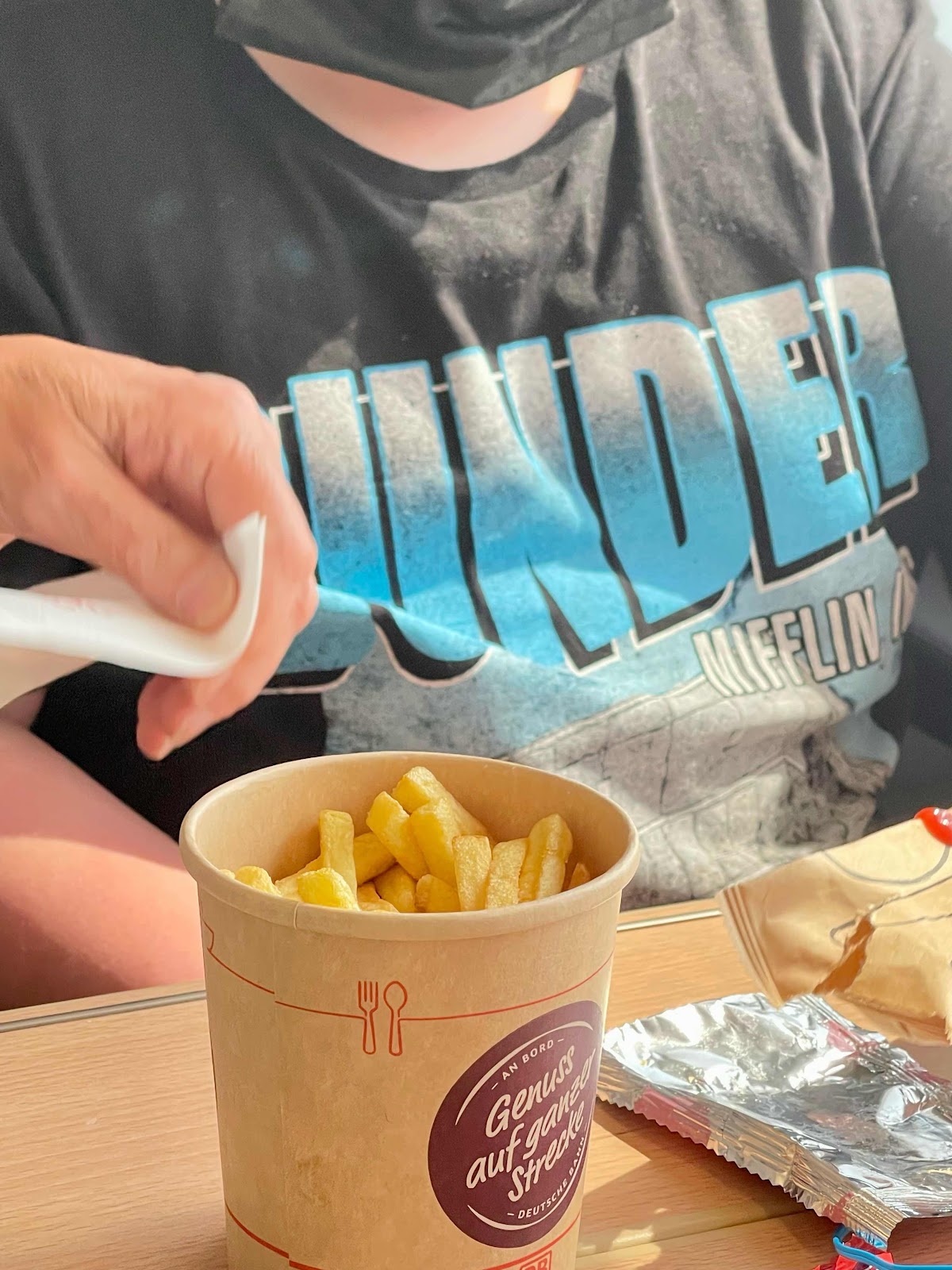 We hope to fly Frankfurt to Chicago tomorrow morning at 8:30. We’ve read reports that FRA is a mess, understaffed like much of Europe and North America.
Flyertalkers are suggesting to “avoid Frankfurt like the plague.”
https://www.flyertalk.com/forum/united-airlines-mileageplus/2086534-avoid-frankfurt-like-plague.html
This recent  post describes what we might be facing tomorrow.

Just wanted to give my experience on the other side of the equation (exiting FRA back to the States) in case it helps anyone:

• Arrived to check luggage at 0700 (1 bag, 2 people ahead in the Polaris/1K line - long line already queued for economy check-in/baggage drop off)

• Took the 1 agent forever to process the pax at the counter. Completed check-in at 07:20 and made my way to Passport Control/border and subsequently security

• Arrived Passport Control (Z gates) at 07:25 - line was already back to the top of the escalator and wound around

• No bypassing for First/Business class. Everyone funneled into one automated reader.

• This took me a solid 55 minutes to get through. During that time several people (at least 2 dozen) on the ORD-bound flight were jumping the queue (fine by me since I had plenty of time) as their flight was about to close. I'm going to say that some of them missed their flight (one group told me they'd been there since the counters opened at 5 AM).

• Arrived at Security and again no differentiation for First/Business. Everyone funneled into one line. Only one lane of security was open. At about 08:30 and additional 2 lanes opened up.

• Through security in roughly 20 minutes.

• Seems like when they opened the additional lanes, they also started letting First/Business through the left-hand side.

Again, sample size of one. But, I fly to/from/through German airports all the time and this is the most chaotic I have seen. Colleagues who flew direct to Cologne/Bonn did not fare any better (2 had their flights completely canceled out of the UK, one mis-connected out of AMS and his return flight was also canceled a week later).

Pack patience and arrive early. May the odds be ever in your favor!

We’ll manage one way or the other, but it will be an early morning. It’s an “interesting” time to travel.
Update: we managed to obtain boarding passes for all of us. Blane’s new passport does not work with the United app but we managed to print it at a kiosk. Between that and carry-on the situation is looking more positive.
Posted by Kathy and Brian at 6:54 AM