It was snowing when woke up this morning - not sticking to the ground but real flakes nonetheless.

What better to escape underground to a cave, the Postojnska jama or Postonjna Cave, but first we had to get there. The tours at this time of year run every two hours on the even hour.

We walked the several hundred meters to the bus station, bought tickets for the 10:00 a.m. bus to Postojna, and waited for the bus. It finally arrived about 10 minutes and on we climbed.

Less than an hour later we got off in Postojna. Here's a free hint for the Postojna Tourist Bureau: Post some direction signs for pedestrians to the cave. We followed closely another English-speaking party and we took turns asking for directions. It turns out we were going the right way. Our bus had traveled up a grade most of the way to Postojna and its official elevation is 554 meters. That's why it was no surprise that here it was not only snowing but snow was sticking to the ground in varying degrees of slushiness.

One more detail: The cave is not 100 meters from the bus station, as we had read, but 1000 meters. We suspect some kind of shuttle bus may run in the summer but it wasn't today. Eventually, however, walking on slushy sidewalks and hopping across the puddles, we made it to the cave entrance, bought our ticket, and waited for the 12:00 noon tour.

There's quite a wild little train ride in and out, upwards of two kilometers.  Brian kept ducking, because the clearances look closer than they are. Once there, people lined up in five language groups and there are audio guides for people who don't speak Slovenian, English, German, Italian, or French.

The cave system is about 20 kilometers long, and there are three levels, but only the highly developed middle level is open to the public. The paved walkways and multitude of lights almost make you feel like you're walking through a Disney attraction. Railway lines were laid in the cave in 1872 and electricity installed in 1884. It's a safe bet that environmental concerns wouldn't allow this today, but the other side is that millions of people have been able to view this incredible cave. 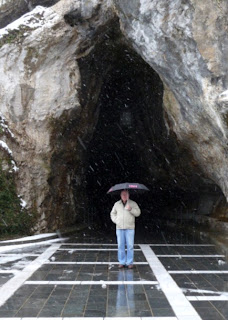 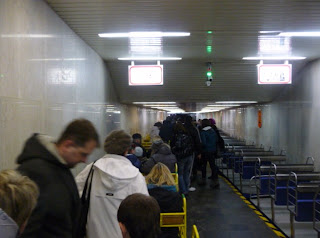 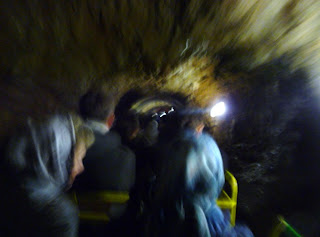 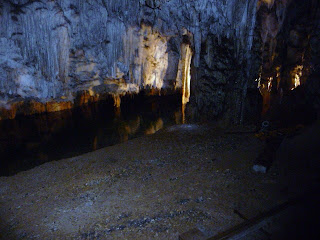 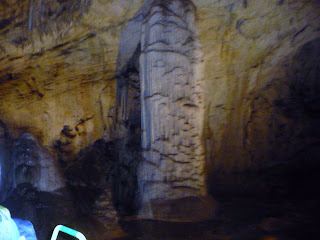 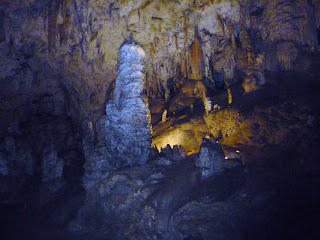 We all get off the train, find a language sign to stand under, and wait for the next train to arrive before setting off with our English-speaking guide. 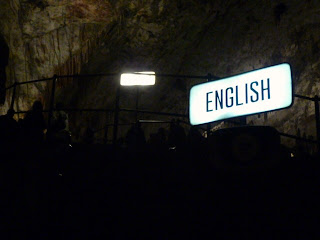 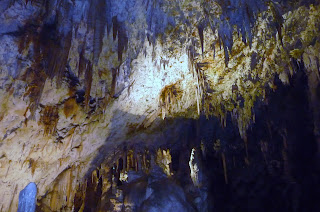 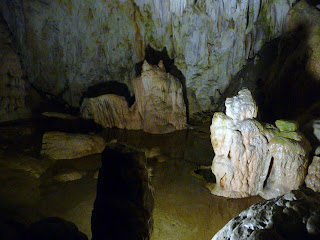 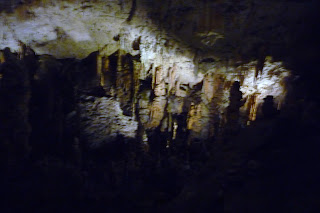 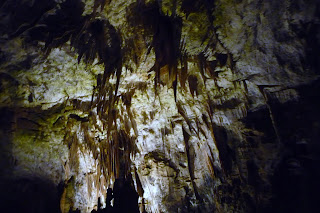 Toward the end we arrive at the Diamond Stalagmite and the Pillar Column, impressive monoliths that have become symbols of the cave. 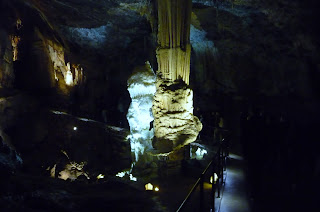 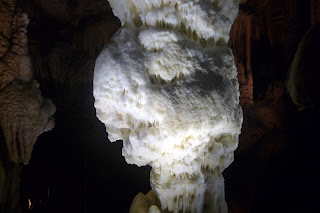 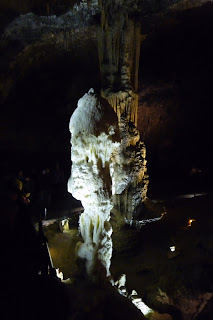 And then it was onwards, upwards, and outwards, after about 45-minutes of walking through the cave, after a final stop in the Koncertna Dvorana or Concert Hall. This is the largest chamber in the cave and could supposedly hold up to ten thousand. Concerts are apparently held once or twice a year. It also gives tourists the chance to visit restrooms and a souvenir shop before reboarding our train to the exit. 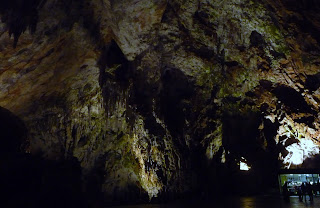 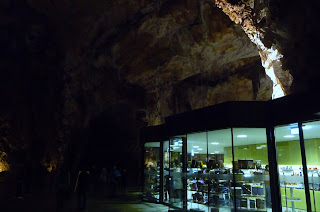 We all know stalagtites and stalagmites. This cave has amazing examples of "curtains" like this one. 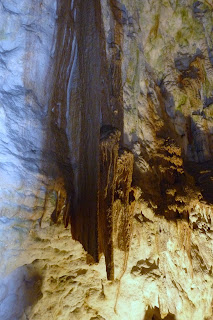 Then it's all aboard for the ride to the exit. 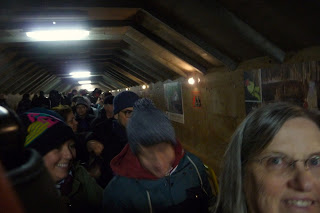 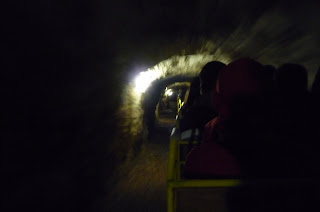 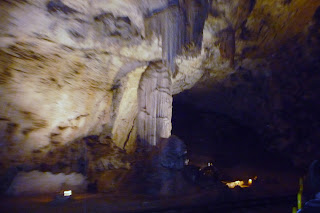 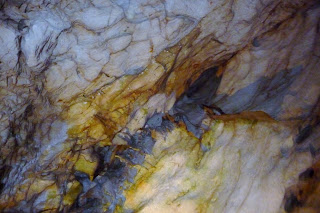 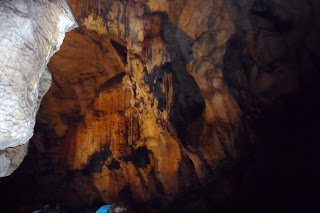 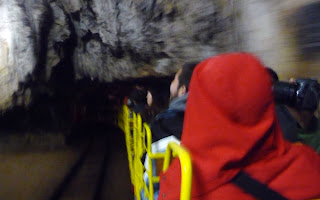 You can see more views of the cave in this 360-degree panorama if you haven't already seen enough.

And one final observation. As the guide announced that the cave's temperature is about 10 degrees Celsius year-around, with humidity over 90%, it struck us that this was one of the warmer outdoor experiences of our total European trip.
Posted by Kathy and Brian at 9:05 AM