We checked out of the Grand Hotel Union Executive and walked the seven or eight minutes to the train station in a light rain. After the past couple of weeks, that's nothing.

Our train arrived 10 minutes late and we clambered aboard to find ourselves the only ones in our six-person First Class compartment. Incidentally, on this train and others like it the only difference between First and Second Class is that the seats are upholstered in leather (fake?) rather than cloth and they recline somewhat, which is fine only if you're sitting across from somebody with whom you're willing to get cozy.

More important, the train was empty and we had the entire compartment to ourselves all the way to Munich. The next compartment contained two very badly behaved young children, probably ages 8 and 10, traveling with their grandmother (we suspect) all the way to Munich. They sang loudly, ran through the corridors and drove their grandmother eventually to start yelling at them. That was a bit tiresome but it simply made us reflect on what wonderful grandchildren we have. Besides, our grandkids would all know better than daring to try tricks on us like singing loudly at the top of the lungs for five or ten minutes at a time, not that they'd ever do such a thing on public transportation.

Despite the little brats shattering the stereotype of the very obedient German (or Austrian) child, we enjoyed the trip and the snowy scenery. We also went through more than one tunnel that could have easily been five miles long.

We caught a Schnellbahn from the train station to the Munich City Hilton and they gave us a room with a window that opens. It must be something we've said on previous visits. We may go out tonight or we may hang around. It's been a challenging trip, weather-wise, and somehow we feel we accomplished something - or at least were lucky - with this very pleasant travel day at nearly the end of our sojourn. 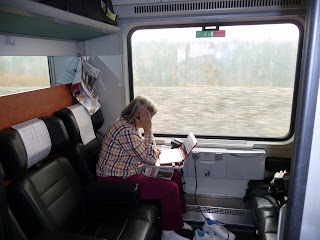 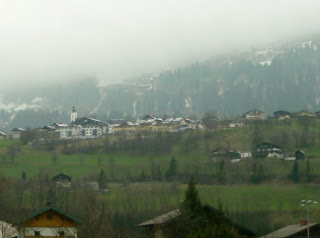 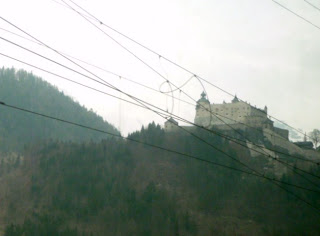 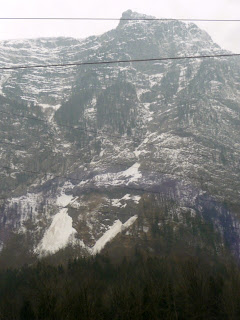 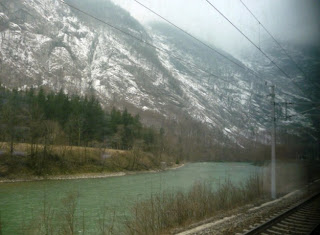 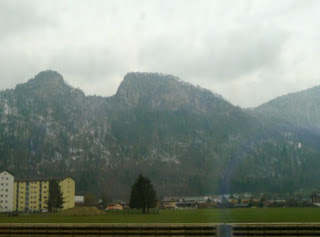 We wanted to include wires in most of the shots to demonstrate we were riding on an electric train.