The weather remained just above freezing but we were determined to make the best of it and walked a quarter of a mile or so over to the funicular that goes up a steep incline to the Ljubljana Castle.

The history of the castle, and the reasons for constructing such a fortress?  Empires and nations rise and fall. If the hill on which the castle stands could talk, what a story it could tell.

The tower we climbed is relatively new; it was only built in 1848.  In the briefest of summaries, the Romans used it when they ran this part of the world, various local dukes used it, and in the 14th century it became the property of the Hapsburg Empire.

It was demolished and rebuilt in the 15th century for the purpose of defending against the Ottoman Turkish invasions. In the 17th century it became an arsenal and a military hospital. It was damaged when Napoleon was running it, and turned back into a prison until 1905. Oh, and let's not forget that Attila The Hun invaded too.

The municipality bought it in 1905, the mayor's inspired idea. Instead of the museum he had envisioned, it was turned into low-cost housing - it was also used to house prisoners of war in both world wars - and the last inhabitants remained until the 1960s, after which a 35-year renovation project was begun, and the mayor's dream was eventually realized a century later. The funicular itself was built in 2006 and saved us a lot of walking. Being charged the seniors' rate of only 5 Euros each was a lovely bonus. That included the funicular up and down, and admittance to a short but excellent video presentation and to the fine Slovenian History Exhibition.

Here comes the funicular on Track 1... 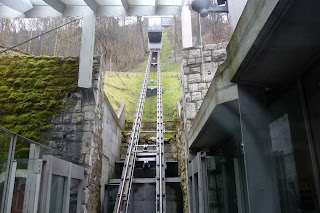 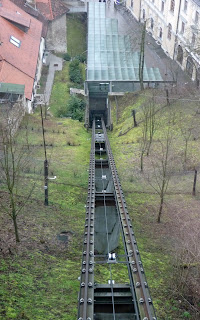 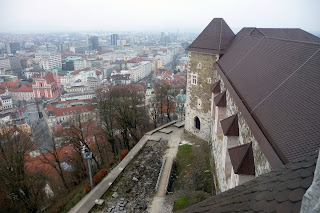 Here we are but there's more climbing to the top of the tower. Fortunately there's an Up staircase and a Down staircase. 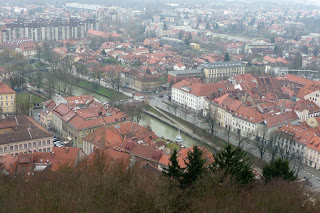 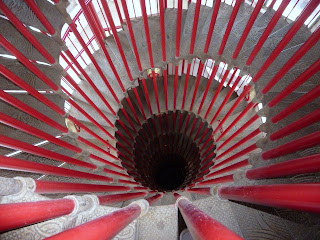 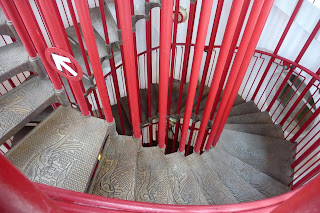 We're finally at the top. 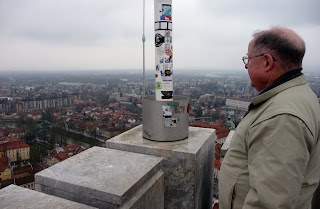 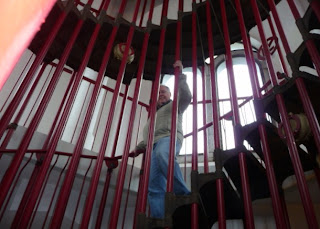 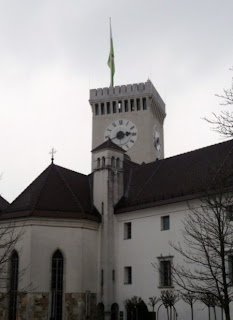 After a couple of hours touring the grounds and the exhibits (a lot of modern technology, including touch-screen information available in English and other languages), it was time to catch the funicular back down. 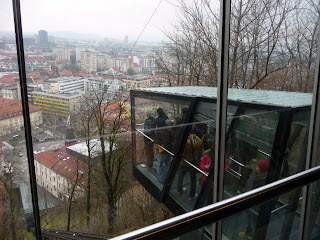 On the way back to the hotel, we crossed yet another locally famous bridge, the Dragon Bridge, completed in 1905 and dedicated to Emperor Franz Joseph I. 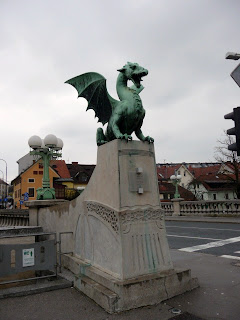 Even on this wintry (!) April 1, we enjoyed strolling along the Ljubljanica River before warming up in our hotel room before dinner. The tower we had climbed earlier stands as an impressive symbolic sentinel over the city below. 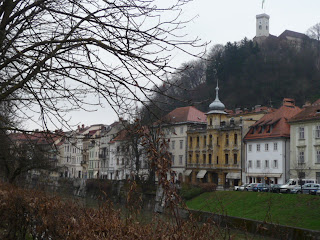