To make a long story short, we prefer AC Executive First to United Business, but we wouldn't pay much more for one over the other. How's that for audacity after only one overnight flight from Vancouver to London? (We flew on one of these last year, but only from Santiago to Buenos Aires.) Now to make that short story long...

The pods and general cabin layout, as you'll see below, are a little more private than in the UA forward/backward configuration, and they would be definitely advantageous for those traveling alone, unless you really like to strike up eight-hour conversations with perfect strangers. We sat in the middle and there's a little privacy screen that we kept lowered so that we could say hello.

The food and beverage selections (four entree choices, although the chicken although the purser told us the chicken was "finished" by the time he got to us) and both of us enjoyed a surprisingly tasty rare filet mignon. The other choices were ravioli and "Cajun halibut." We were then served a quite pleasant cheese course, featuring a Brie, a Swiss, and a cheddar with Waterford Biscuits or something similar. After that came two choices of dessert (fresh fruit or three scoops of ice cream of various flavors).

The hard liquor included Bombay Sapphire Gin and similar brands, and the wines were pleasant. We enjoyed a South African Pinotage with dinner, bringing back memories of our trip there with Tom and Ellyn.

The personal video selection, shown on a screen not as large as the new UA screen, is slow to respond, and is one area that's probably inferior to UA's choices (as unlikely as that might seem to UA flyers).

There are some very nice little touches we noticed on this 777. Every seat has its own hook, either for a coat or the noise-reduction headphones that were hanging on it. We were able to plug in our Bose headphones - there's a socket right below. The lavatories are larger than UA's, with a regular door similar to the handicapped lav we've seen on some large planes.

The amenity kit had everything we needed - ear plugs, socks, and mask. One more trivial but cute touch: The toothbrush and tiny tube of toothpaste come in a plastic wrapper that opens with a pull and reseals. We might just hang on to those for awhile.

As on Lufthansa, ever seat is supplied with a bottle of water, and flight attendants refilled the bottle without our even having to request it. The crew service was very good throughout the flight. We experienced moderate turbulence (moderate "chop" means the plane is really bumping) for several minutes not too long after it took off. Kathy claims it was bumpy again during the night but Brian slept through it. Otherwise, the captain was quite generous about keeping seat belt sign off.

The views of the outside world vary from limited to non-existent, particularly in the middle seats where we sat. That didn't bother us at all, although Brian had no view and was a little surprised when we touched down at LHR. 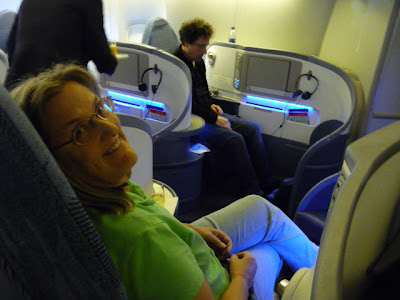 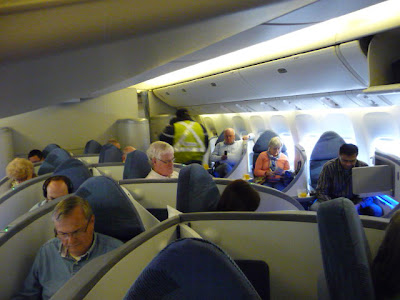 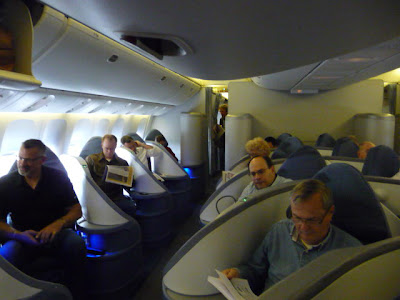 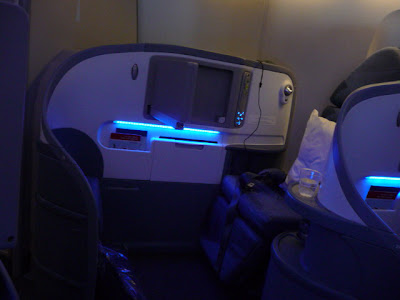 Once we'd breezed through Immigration and Customs (the officer didn't bat an eye when we told her we were flying on to Sydney tomorrow via Los Angeles) we walked out the far exit and found the AC Arrivals Lounge. We took showers in quite spacious and pleasant rooms, and now we're sitting around shortly about 12:30 p.m. (4:30 a.m. at home) enjoying coffee and a light breakfast before finding our way to the hotel. 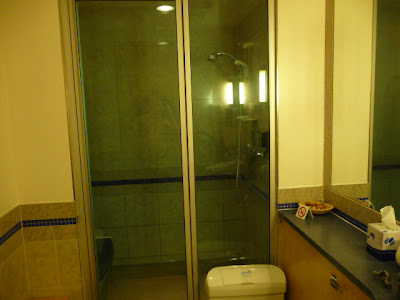 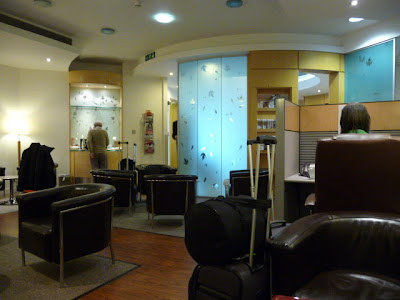 It's a civilized way to travel, isn't it?
Posted by Kathy and Brian at 4:50 AM