There’s useful alliteration in the admittedly corny  title, giving you a hint of how to pronounce Chi-vi-ti-veck-i-a, the port city of Rome, and translatable as Ancient City.
It’s now a city of 50,000 or so. Its harbor was developed by a  Roman emperor at the beginning of the second century AD, and built upon an Etruscan settlement. Is that ancient enough for you?
It’s long been a significant and strategic location, so it’s no surprise that it was significantly damaged by Allied bombing in WW II.
Most travelers know it as a cruise port, the port city of Rome.  We’ve previously docked here at least twice, and we’ve utilized it to travel into Rome, and also to visit Ostia Antica, Rome’s original port city.
http://www.wanderingwarners.com/2013/11/mediterranean-cruise-pics-part-one.html?m=1
This trip was different. We took the opportunity to fly from the U.S. a few days early in order to tour a part of Italy we’d never seen. We decided to spend a few post-Puglia days in Civitavecchia to relax before n boarding our transatlantic cruise.
We signed up for a vrbo property owned by one Mauro. The rate for our five-night stay averaged about US $65 a night and included pickup at the train and drop off at the cruise. Mauro also proved to be a valuable source of information for our touring around Puglia. What could be better?
Mauro picked us up promptly at the train station and drove us to our apartment. It exceeds our already high expectations. 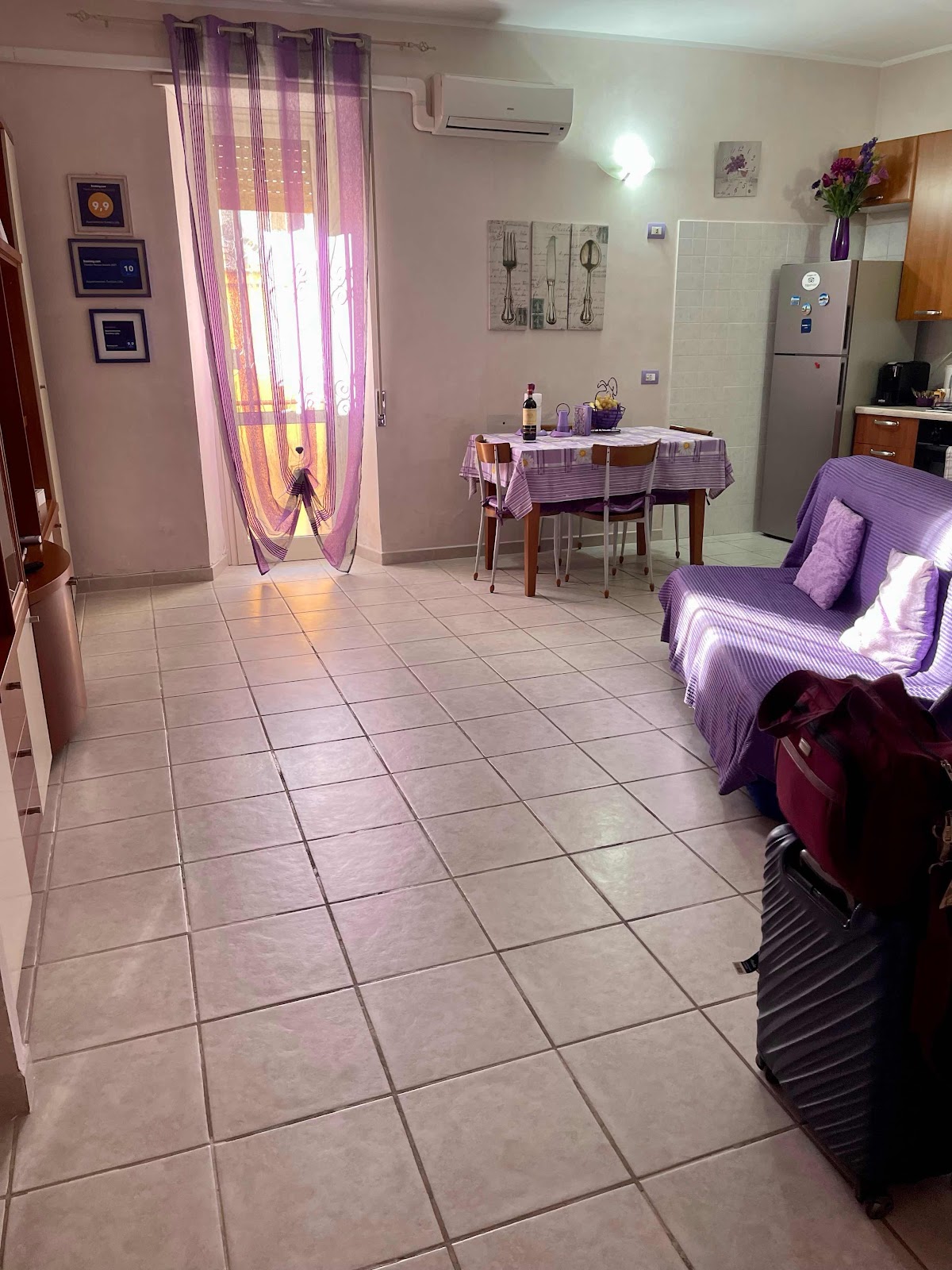 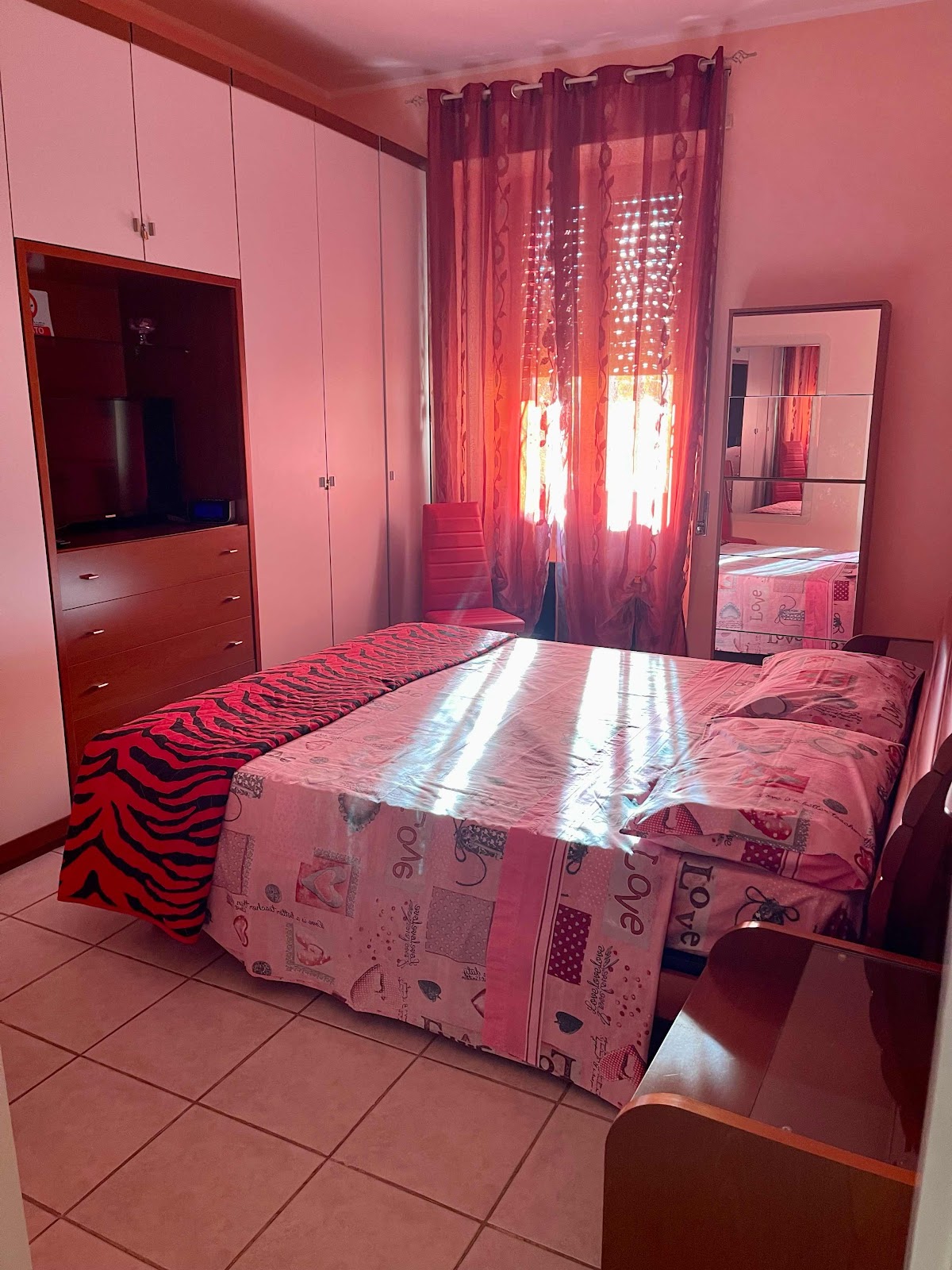 He’s stocked it with everything we might need, including coffee, always a way to win our hearts. In summary, it’s terrific.
We wandered down to a central part of the city later land dined al fresco at the well-.reviewed My Lord. 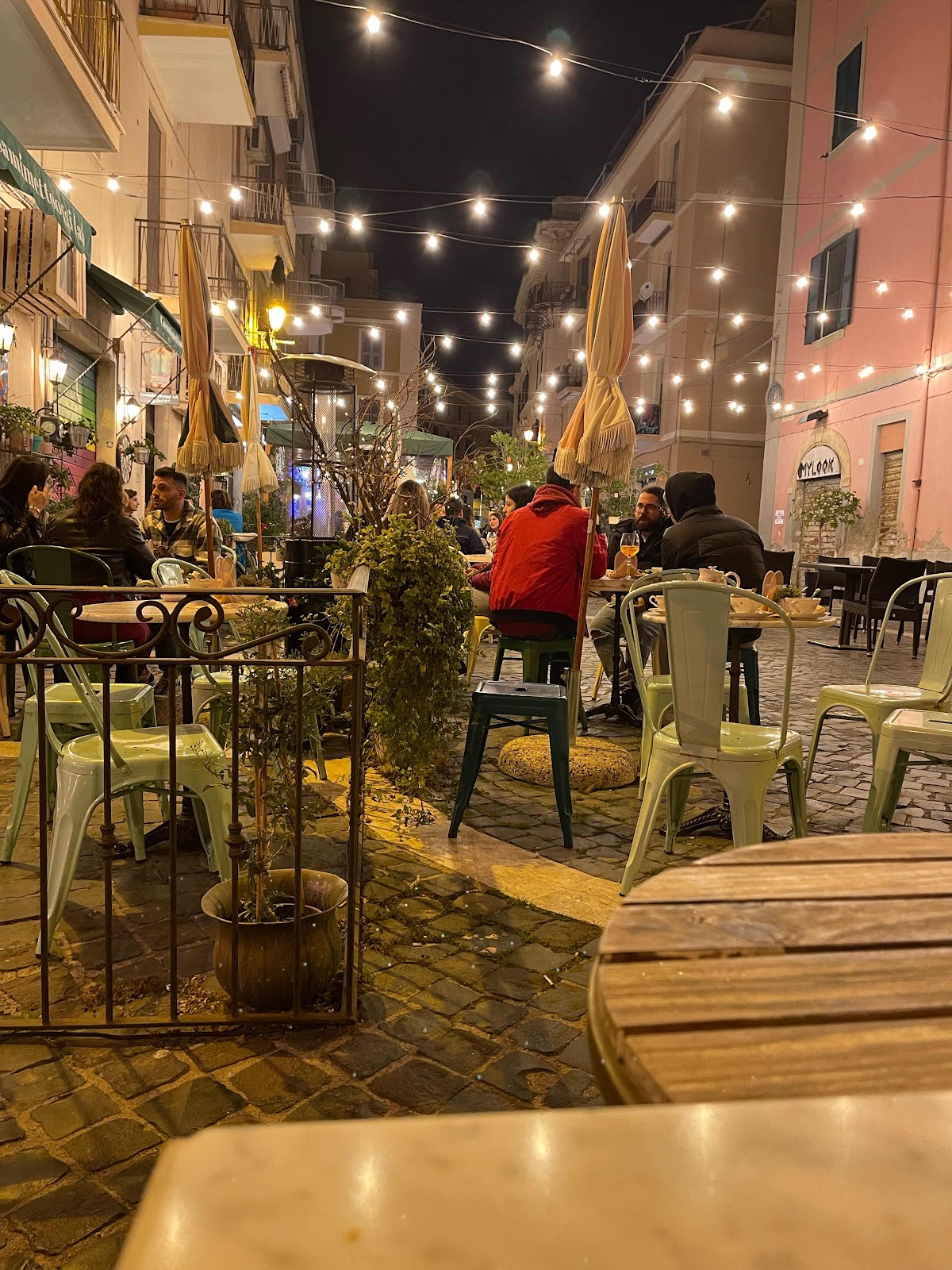 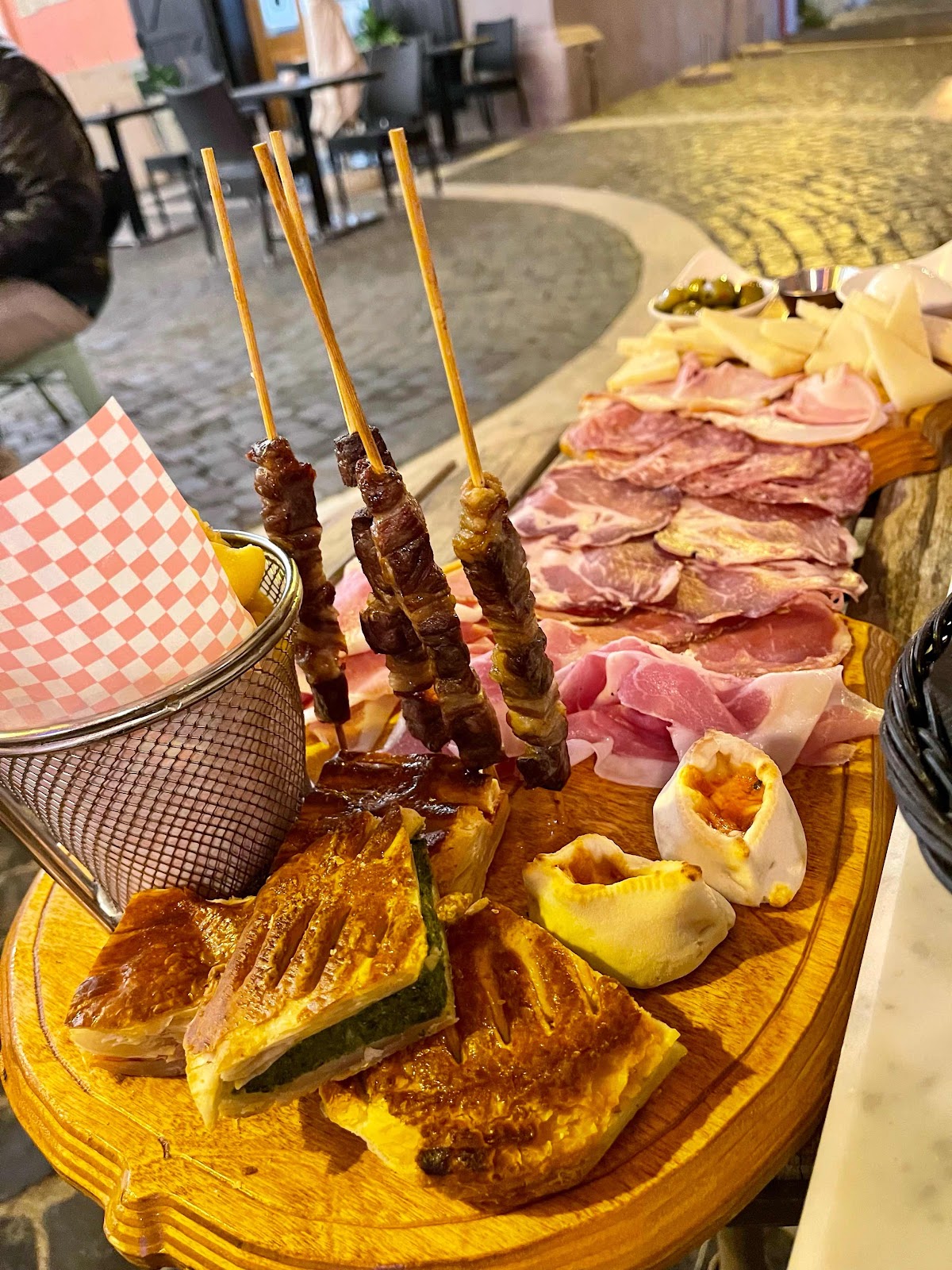 It stretched the length of our table. Here’s the view from the other end. 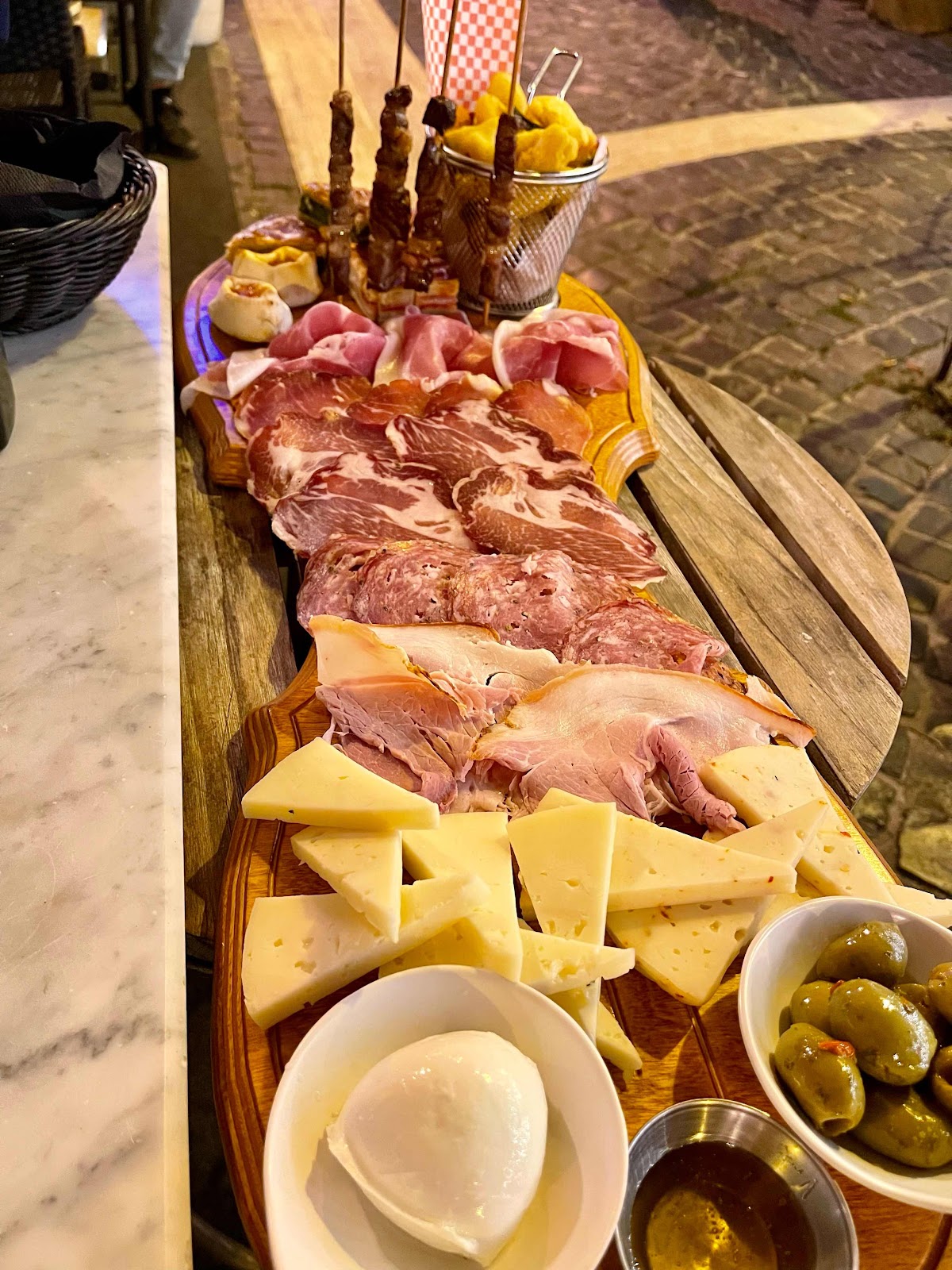 Feeling quite full, we waddled back to our apartment and slept well.
This morning we went shopping downtown for a few essentials, and stopped for a pizza. 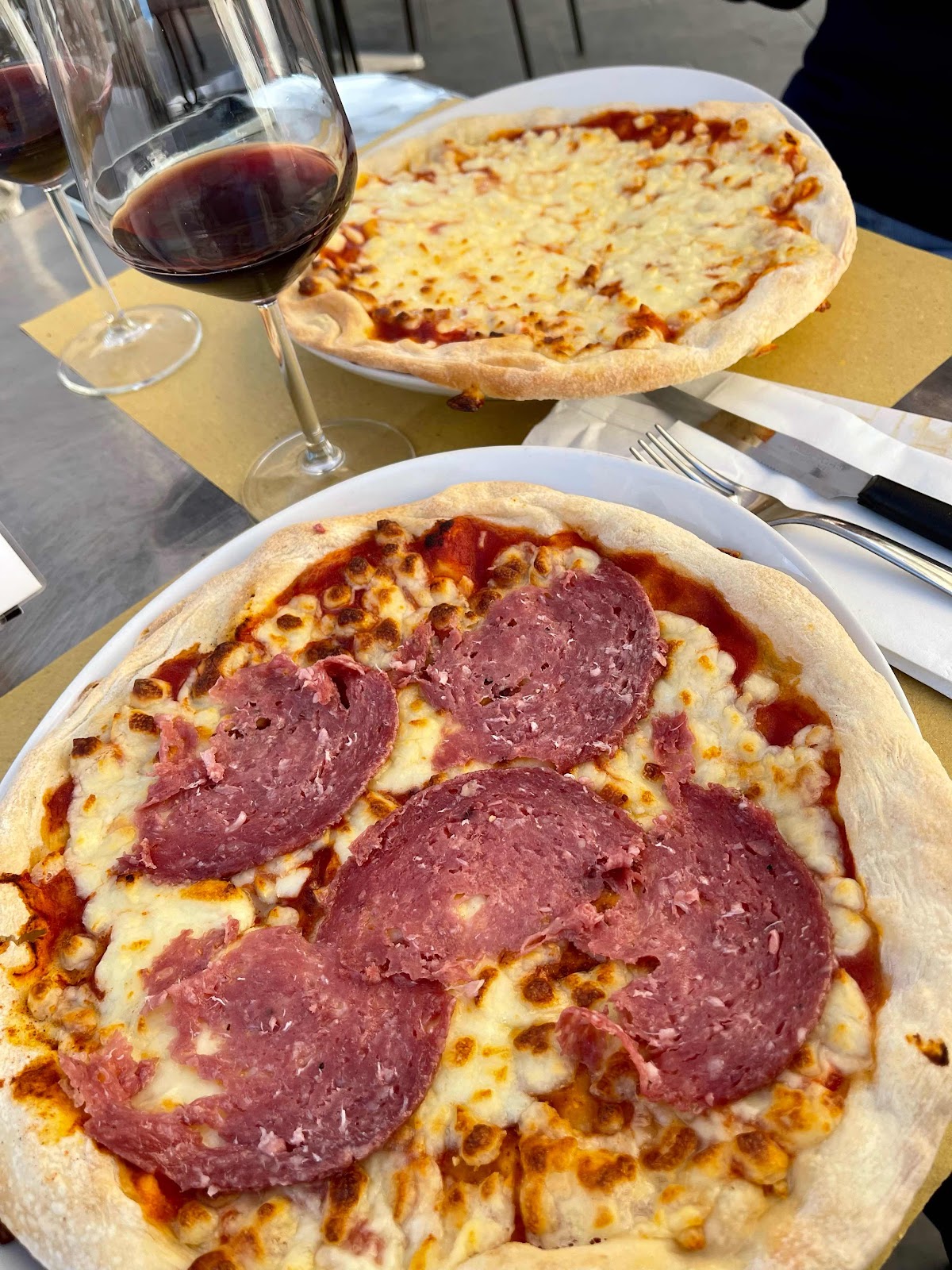 Those are thin-crust pizzas, so please don’t judge us.
We asked Mauro to recommend where to buy wine to take on our cruise (Oceania allows customers to carry wine and hard liquor aboard, and to consume wine in the restaurants with a corkage fee).
Mauro walked us over to a good-sized supermarket in the afternoon. He’s obviously a wine lover himself, and was intrigued by our Vivino and Delectable wine apps.
We managed to walk a couple of miles today, so we don’t feel guilty about relaxing “at home” tonight with a few snacks and some wine.
Civitavecchia doesn’t appear to be a spectacular destination at first glance, but it has a nice feel to it, and we’re happy to be here. We’ll be exploring it a bit more over the next couple of days.
Posted by Kathy and Brian at 11:44 AM

Your post was a special morning gift of humor and enjoyment for a fellow traveler forced to wake up at 4:30 AM! And no I won’t judge you for having pizza in the morning! Lol
I wish AirBnB was as cost effective in US as in Italy

I went thru LAX this AM eagerly searching for secret tunnels like an episode from Harry Potter, but alas no luck.
I did however have pizza for breakfast and the Gods were shining on me as I got bumped to Business for the leg back to YVR
All in all, this historic Nov 8th is shaping into a Super Tuesday