After our leisurely breakfast, we took note of the chilly weather and decided today would be an "inside day." Given the weather forecasts, we may experience more of those than we would have thought on this trip. We managed to find a little sunshine but in the shade it's downright cold.

Several years after our first visit we returned to the Haus der Musik and spent much of the afternoon there. It's new by Viennese standards and features some fascinating interactive information about sound.

We started with a couple of rooms devoted to the history of the Vienna Philharmonic, including a small theater with absolutely brilliant video and sound of excerpts from the orchestra's 2013 New Year concert as well as an outdoor summer concert at Schönbrunn Palace.

From there we experienced many of the interactive sound exhibits. Something new to us was the Shepard Effect or Shepard Tone, an "auditory illusion of a tone that continually ascends or descends in pitch, yet which ultimately seems to get no higher or lower," which you can read more about here.

We finished our visit by spending time in the rooms devoted respectively to the great Classicists Haydn, Mozart, and Schubert, and Waltz King Johann Strauss.

Not everybody would want to spend nearly four hours there but after all we are retired music teachers and we found it fascinating.

We bought a combination ticket that will admit us as well to Mozarthaus, and we'll probably do that tomorrow.

We enjoying strolling back to our hotel without using a tram or subway but a half hour or so outside was plenty for us since our packing didn't include winter clothing and the temperature is in the mid 30s with a slight breeze.

Our path took us partway around the Ring and we stopped long enough both to admire the Austrian Parliament Building and to offer homage to Wolfie Mozart. 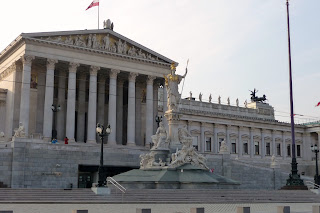 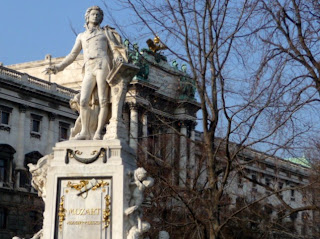 The Haus der Musik looks like a place I'd want to spend four hours as well! I'll make a note of it for sure.

Another intriguing spot for instrumentalists is the "Collection of Historical Musical Instruments" in the Kunsthistorisches Museum:

We still remember gazing with awe at a clarinet build by Denner, the fellow who invented the instrument.