Morning arrived early. We wanted to build in plenty of spare time to get to the airport. As it happened, it wasn't necessary.

Since the lounge and downstairs restaurant open at 6:30 a.m. for breakfast, the lounge manager suggested we take advantage of the complimentary room service breakfast. That was a nice way to start the day at 6:00 a.m. 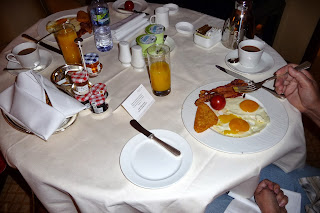 We checked out efficiently in the lounge and were in the elevator going down to level three, the "secret entrance" to the Conrad from Pacific Mall between two shops, Loewe's and Celine.

By now it was 6:50 and the escalators weren't running but the elevators were. We descended to Level One and walked the usual distance across the mall and downstairs through the group of restaurants before arriving at the MTR station.

Surprisingly, neither the station nor the train was all that crowded, and we rode the single station to Central.

From there it was another long walk and more lifts until we finally arrived at the Airport Express. We had loaded our Octopus Cards yesterday with HKG $50 each, giving us a small cushion for the HKG $100 ride to the airport.

A train was in the station, we found comfortable seats, and off we went, stopping only at Kowloon and one other station before zipping out to HKG. 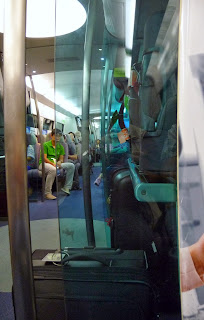 For some reason we enjoy the little visual display of lights up above that illuminate along the line toward the destination. 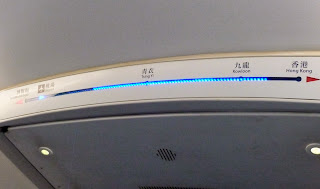 Once inside Terminal One, we went to a United kiosk to print our boarding passes. We had chosen a flight that allowed our upgrade instruments to clear immediately. We couldn't help but notice that a woman using the next kiosk was offered Economy Plus for $28. That's a bargain for a flight as long as HKG-SFO. We also saw she was offered a "buy-up" to C (Business Class) but we didn't see the price.

At this point, there are still eight or nine people on the list waiting to see if their upgrades clear and it's showing only one seat available - Suckas!

Seriously, it's another example of why we have fallen out of love with United post-merger.

We're currently in a deserted Singapore Silver Kris Lounge and will head closer to our boarding gate in a few minutes.

We're due to take off on time and land in San Francisco on time. We have a fairly tight connection for our SFO-SEA flight, but between Global Entry and TSA Pre-Check we might just make it.