Hong Kong: Our Chinese Dinner At The T Hotel

Brian asked a concierge Friday morning if a table was available, and was told a note would be left in our room. When we returned in late afternoon there was no note.

Brian reported to the front desk and asked the duty manager if he could find out. The manager, Mr. Lam, checked and said we could dine at 6:30 p.m. Wow!

Brian returned to the room and five minutes later the phone rang. A polite young woman told us that unfortunately there was no room for us.

Brian returned to the front desk and explained to Mr. Lam he was still confused. Mr. Lam seemed equally confused and called the restaurant again. After a lengthy conversation, he apologized to Brian and said that there wasn't a place after all. Brian said that was fine and returned to the room.

As we were enjoying a drink awhile later on the sixth-floor restaurant balcony, Mr. Lam hastened back to tell us he had been looking for us and that an 8:30 spot had been found for us. We thanked him and enjoyed a very interesting authentic (as far as we know) Chinese tasting menu, accompanied by entertainment and featuring a video screen of the kitchen in action on the wall behind us. 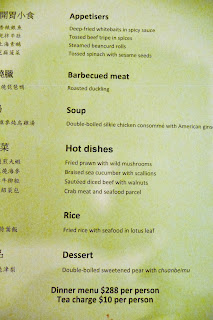 After a short wait in the rather magnificent foyer of the English-Speaking Dining Society, during which we were treated like VIPs by the two managers who were obviously aware of our reservation problems, we were seated and the dining commenced. 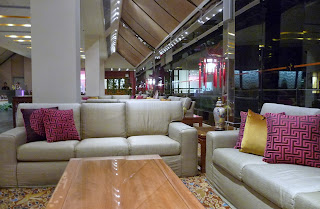 Our plate of appetizers looked like this. We particularly enjoyed the spicy deep-fried little whole fish, arranged on both sides of the plate. 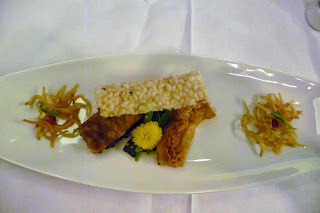 As we dined, we enjoyed the musicians, the view of the chefs working in the kitchen, and of course the other diners were obviously enjoying their meals as well. 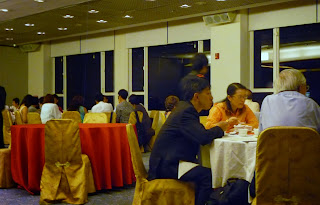 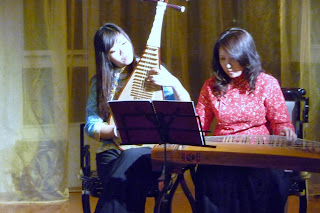 Our second course arrived, a small but elegant portion of roasted duckling. 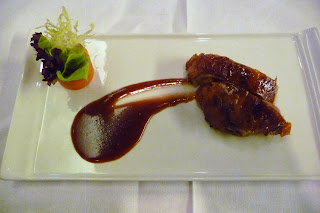 Next was a soup course, a Double-boiled Silkie Chicken Consommé with American Ginseng. That was followed by fried prawn with wild mushrooms.

The trainees huddled to watch something being prepared, and before we knew it we were served a very spicy and delicious Sea Cucumber. 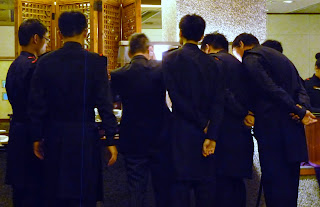 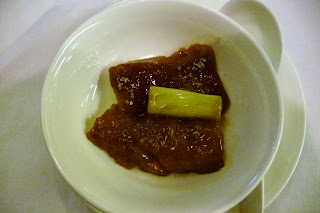 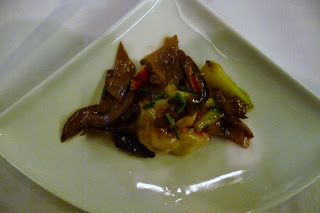 Following that came sautéed diced beef with candied walnuts. The manager we had chatted over the menu with became aware of her allergy to walnuts and hers arrived walnut-free. Brian had to describe them to her. 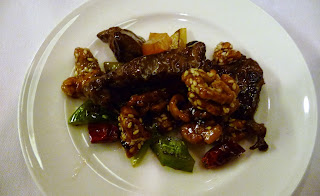 The crabmeat and seafood "parcel" was filling and delicious. 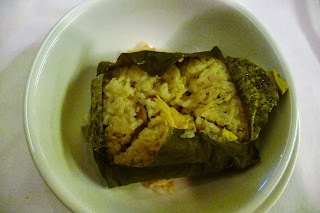 That left only the dessert, a "double-boiled sweetened pear with chuanbeimu." It just didn't do a lot for us, and probably the sublety was wasted on us. We ran across a similar recipe as a cough remedy. Unfortunately it didn't cure Kathy's lingering cough either.

That small reservation aside, it was all a marvelous experience, and including a bottle of Pouilly-Fuissé, it set us back a grand total of about USD $80.