Waking Up In Newark

Thursday was fairly tiring. We flew YVR-SFO in an exit row and had a reasonable few minutes to board our SFO-EWR flights, where we sat in the bulkhead, boarding early enough to stow everything in the overhead bins.

The plane (funny how they're always called "aircraft" in announcements, e.g. "This aircraft is equipped with...") was an Airbus 320 with UA's old IFE and only about four channels working. The feature movie was "The Lone Ranger," a turkey of a movie that Brian had viewed on our last international flight for old time's sake. Neither Clayton Moore nor Jay Silverheels would have approved and Kathy gave up after 20 minutes. Who says Disney and Johnny Depp can't produce flops?

We ordered one of the "buy-aboard" sandwiches and it was barely edible. Anyway, we survived. We don't know EWR at all well, so first wandered outside before calling the hotel and realizing we had to take the Air Train over to p4 to catch our hotel shuttle. What with picking up our boarding passes for the Milan flight at a kiosk and then waiting for 10 minutes for the little automated train, we didn't get to bed until upwards of 2:00 a.m. local time.

We slept through until about 9:00 a.m. and got ourselves downstairs in time to eat a waffle, a typical Hampton Inn breakfast. We're hanging out in our room with a 2:00 p.m. checkout - our flight doesn't depart until about 6:30 this evening.

It was teeming rain for awhile but the skies seem to be clearing a little now and we'll watch TV and play on the computer until heading for the airport this afternoon.

We snapped a couple of photos of the Air Canada Maple Leaf Lounge during yesterday's visit. It's a very pleasant place to pass a couple of hours. 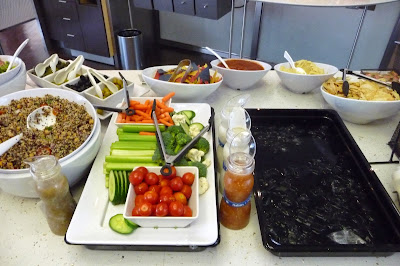 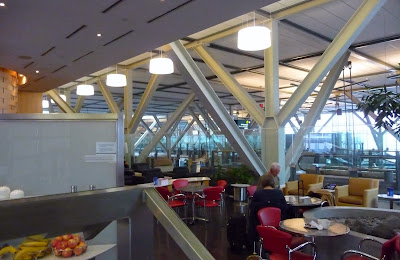