We start with a thought about public transit after using the Barcelona Metro for a couple of days. We have come to realize that this city's system wouldn't be that user-friendly for some folks.

First, while there are generally (but not always) escalators going up, there are very few going down, making for a lot of descents on stairs. Second, there are often considerable distances to be covered on foot when transferring from one line to another.

The lines zig and zag quite a bit; skimming a history of the Barcelona Metro leads to the conclusion that it is very much a "work in progress."

Still, it was very useful Friday in transporting us first to the Museo Picasso, then a look at the exterior of Gaudi's La Sagrada Família cathedral, and finally to the Port Olímpic on another glorious day.

On our first subway ride of the day, we were impressed to sneak a peek at a young woman who could wheel on her bicycle,  park it in the vestibule between cars, and casually read while leaning against it. 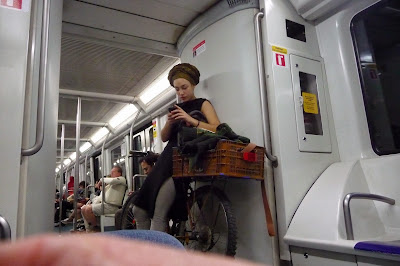 Once at the Picasso Museum, we could only take a few photos of the magnificent building in which the exhibits are housed, since photography is otherwise forbidden. 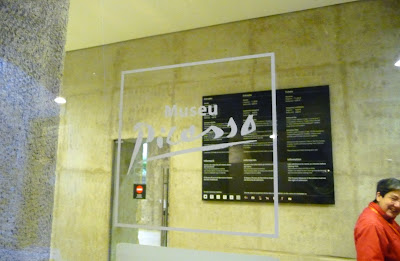 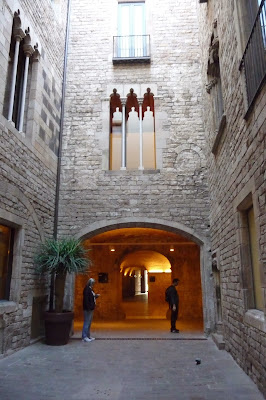 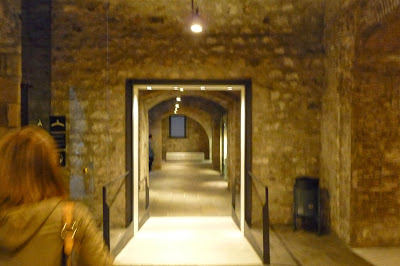 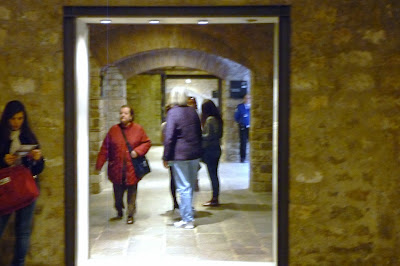 Once we had enjoyed a spectacular overview of Picasso's work, from some of his first paintings exhibited at the age of 14 through his Blue Period, Cubism, and later works, we relaxed by wandering through some of the tiny little streets of the adjacent neighborhood. 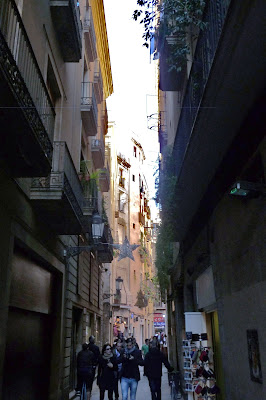 Friday is wash day for this neighborhood. 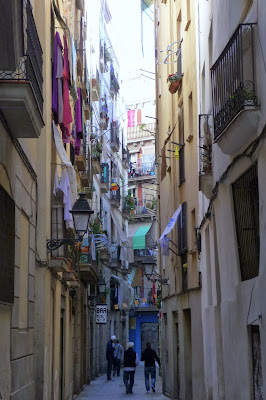 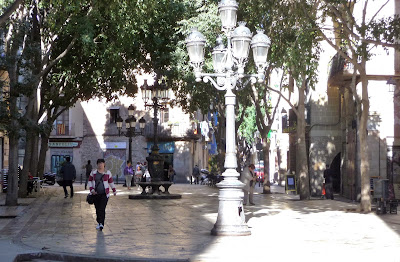 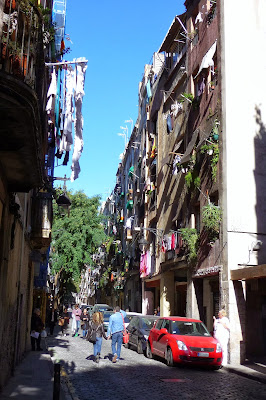 We wandered further and walked through Barcelona's own Arc de Triomf, built for the 1888 Exposición Universal de Barcelona. 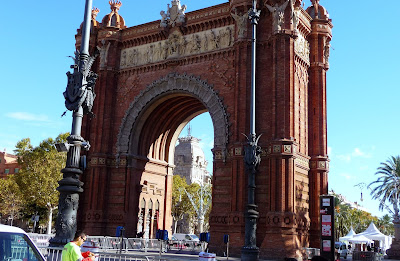 As one guidebook put it rather cynically, nobody has ever explained exactly what it was that would be make Barcelona or Spain feel so triumphant in this era.

We continued to wander, taking another subway toward Gaudi. This, incidentally, is a fairly typical view of a Metro exit and entrance - escalator up but lots of stairs down. 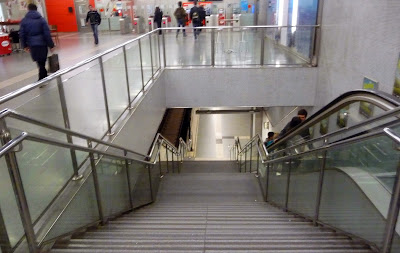 And then a look at this particular masterpiece of the famed architect Antoni Gaudí, like the Metro another work in progress. 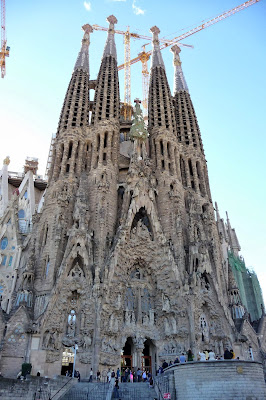 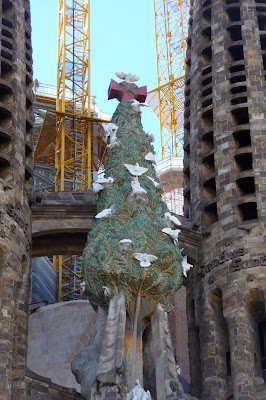 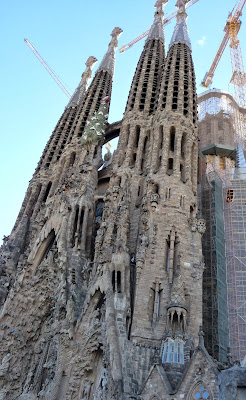 From there it was another Metro ride to the Olympic Port before returning to our hotel in time for Happy Hour. We stroll along the waterfront and admire the big kids' toys. 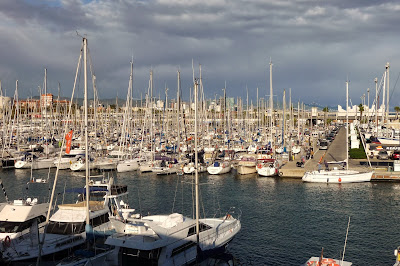 We can see the striking W Hotel, looking to our compact camera like little more than a stylized geometrical blob from this perspective. 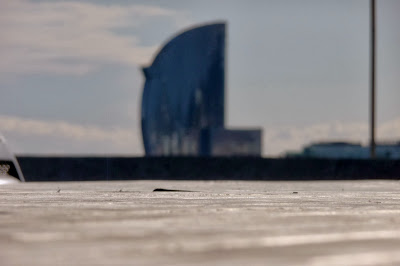 We wind up another good day in Barcelona by taking in some more views before riding the Metro back to our hotel. 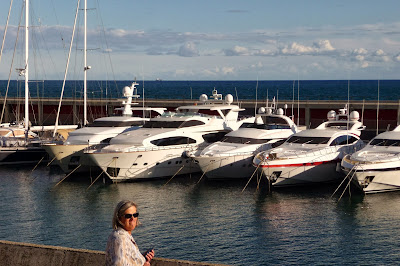 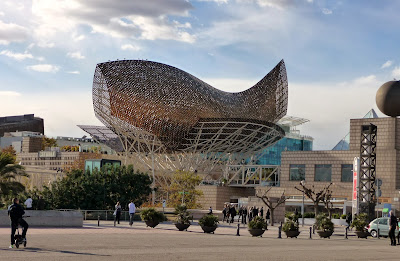 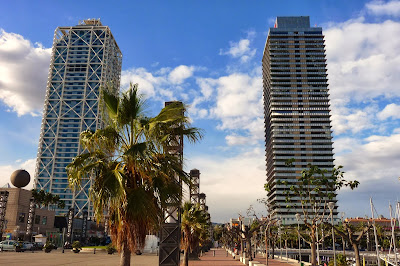 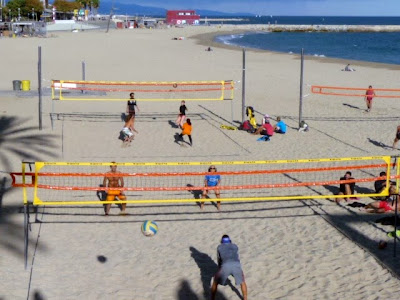 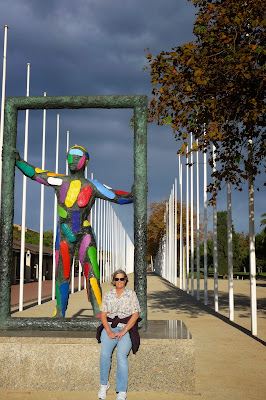 We have to admit that the nearly quarter-mile walk to transfer at one subway station in particular makes it necessary to reserve a little energy for the ride back to the Hilton. 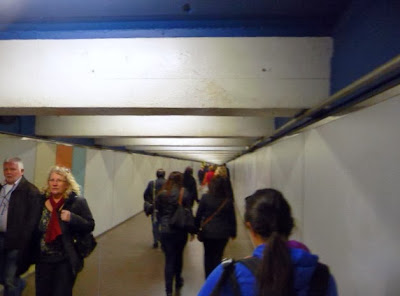