Shortly after enjoying a more-than-adequate breakfast in the very quiet Sheraton MXP Lounge, we checked out and caught the free bus to the EasyJet terminal, a surprisingly long ride.

Inside all was efficiency as we checked our bags and went through security. Brian has discovered his new Bass boat-style casual shoes, while combining stylishness and practicality at a very attractive price thanks to the Bass Outlet store up the road from us, have set off WTMSs (walk-through-metal-detectors) both in New Jersey and in Milan so off they have to come.

Once at the gate with lots of time to spare, we relaxed and viewed our surroundings. 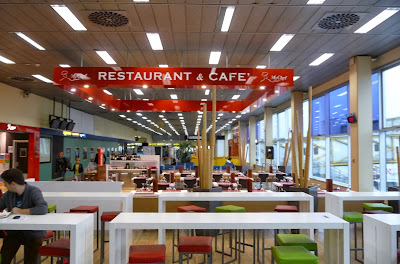 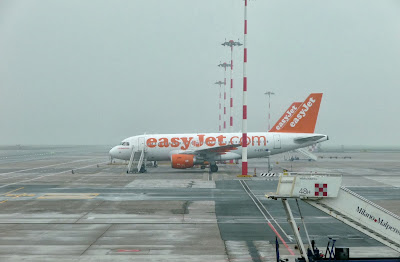 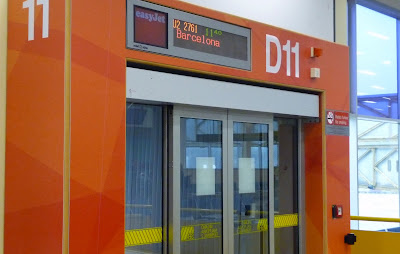 EasyJet is 18 years old this year, and by imitating Southwest Airlines established the European low-cost-carrier as a marvelous new travel alternative.

We paid extra for exit-row seats, which also gave us early boarding. As it happened, nobody signed up for the middle seat so we had the entire row to ourselves for the 90-minute flight.

Once we landed at BCN, with a little help from the information booth on the location of the RENF train, we walked to the other side of the terminal and took the escalator to a ramp, eventually walking upwards of a quarter of a mile to reach the train tracks.

We knew the station we wanted but couldn't find it on the screen. A helpful attendant was there to help us, and again when Kathy's ticket malfunctioned at the turnstile.

The train arrived, a crowd got off and a crowd got on. It was less than a 30-minute ride so we didn't mind standing, especially since the train moves quite slowly. 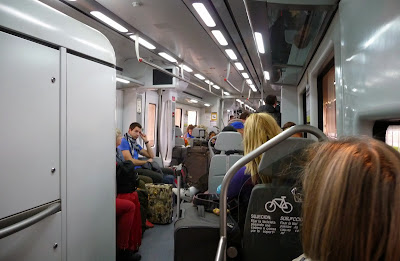 Up to now, our trek to the Hilton Diagonal Mar had been the model of efficiency, and far preferable to a 60-Euro (!) taxi ride.  The situation deteriorated somewhat at this point.

Along with a number of other confused tourists (complete with suitcases) we emerged from the underground train station to look in vain for the Metro which would take us within a "10-minute walk" from our hotel.

Eventually one couple accosted a passer-by who pointed them in the right direction and we crossed a couple of streets and walked a block, only to see no sign of a subway. We walked another block and Brian in desperation asked a restaurant waiter, who kindly and courteously pointed out a somewhat obscured red M across the street.

Getting to the Metro involved a lot of stairs and a lot more walking. The Yellow Line (Line 4) at least wasn't very crowded. Once off the subway - a surprisingly long ride - we tried to follow the map e-mailed to us by the hotel. It proved to be a driving route rather than a pedestrian route but we eventually found the Hilton by following our hunches.

A friendly check-in clerk welcomed us, assigned us to Room 1920, one of the premier rooms in this property with corner windows and an amazing view.

Heck, even the bathtub has a view. 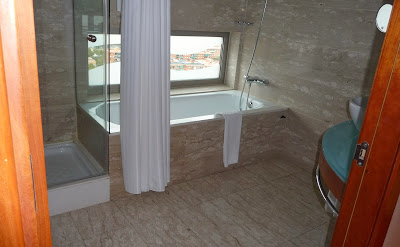 The room is spacious and attractive. 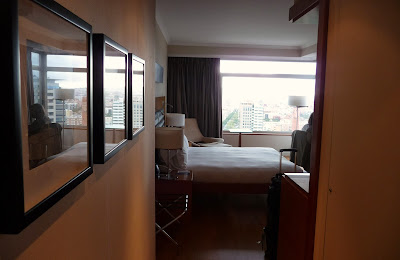 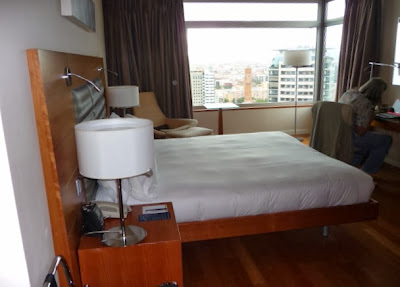 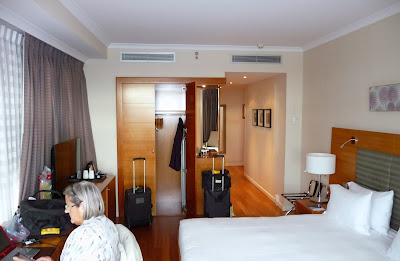 Oh, and how about the views? Let's start with the impressive entrance to the huge shopping mall across the street from the hotel. We intend to buy a few bottles of wine there tomorrow before boarding Nautica. We strolled over there but either Sunday "blue laws" or local tradition resulted in every store other than restaurants being closed. 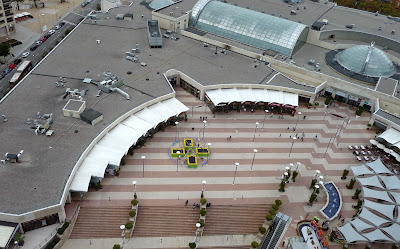 Incidentally, our check-in clerk also warned us about pickpockets and said the situation is worsening. We gather that recent immigrants are either part of the problem or being blamed for it. We intend to keep aware and to leave most of our valuables in our room safe when wandering around.

But let's focus on the positive and enjoy the spectacular views from our window... 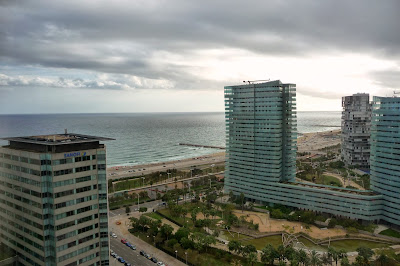 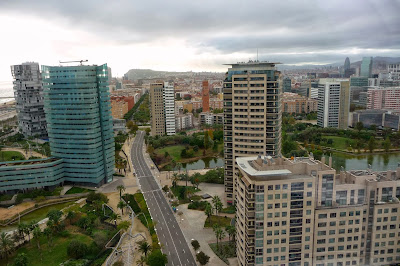 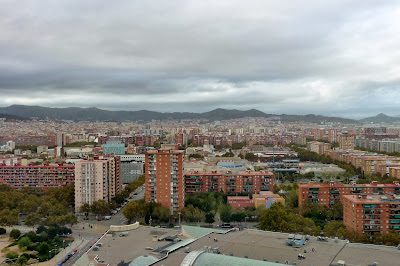 We can even watch Spanish surfers way down below waiting to catch a wave. 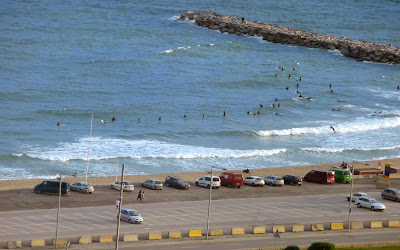 We suspect the city lights will be impressive when darkness falls. We enjoyed a glimpse of the sun when the clouds momentarily cleared. 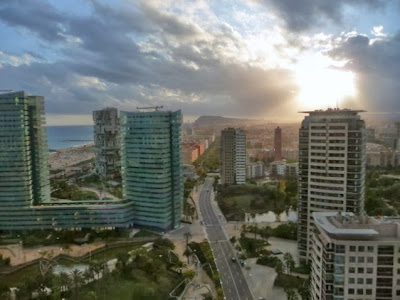 We learned today how we would travel another time from the airport to a hotel: Take the train to the fourth stop, and then grab a taxi! The same probably works in reverse.