Tasting India at Zeera in the Conrad Pune

This was perhaps the most exciting dinner of our trip, in terms of the sheer variety of tastes and smells.
We discovered later that zeera is a variant of jeera, from the Hindi jīrā, meaning cumin. At Zeera we tasted a lot of cumin and a lot of other spices, singly and in combinations that were sometimes bold and sometimes subtle.
Zeera specializes in the cuisine of Awadh and Northern India. It did differ in taste from the dishes we enjoyed in Kerala, and of course you won't find beef featured on the menus here. It's all been overall fabulous, and we appreciate and admire Indian cuisine more than ever, even as novices. 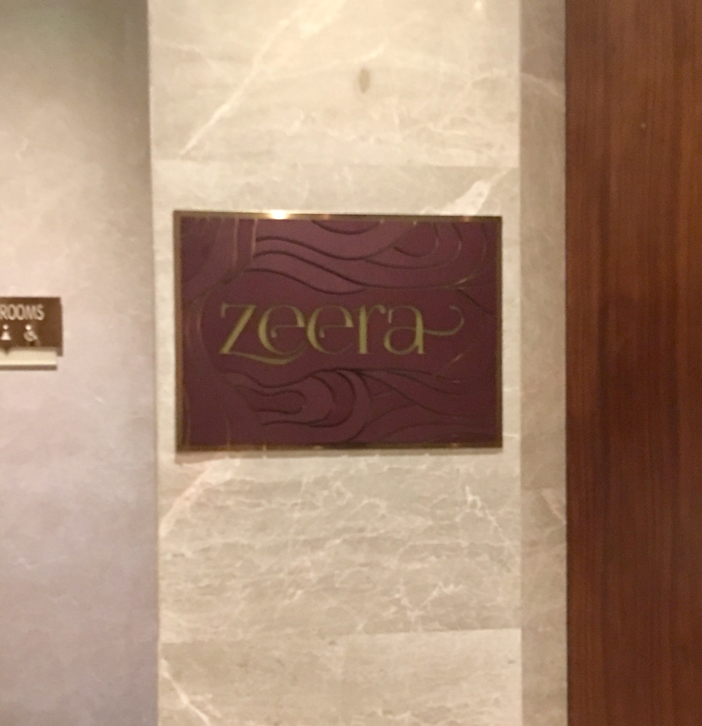 This joint exudes elegance, right down to the dinner plates imported from the U.K. Just to whet our appetites, the waiter delivers this to the table. 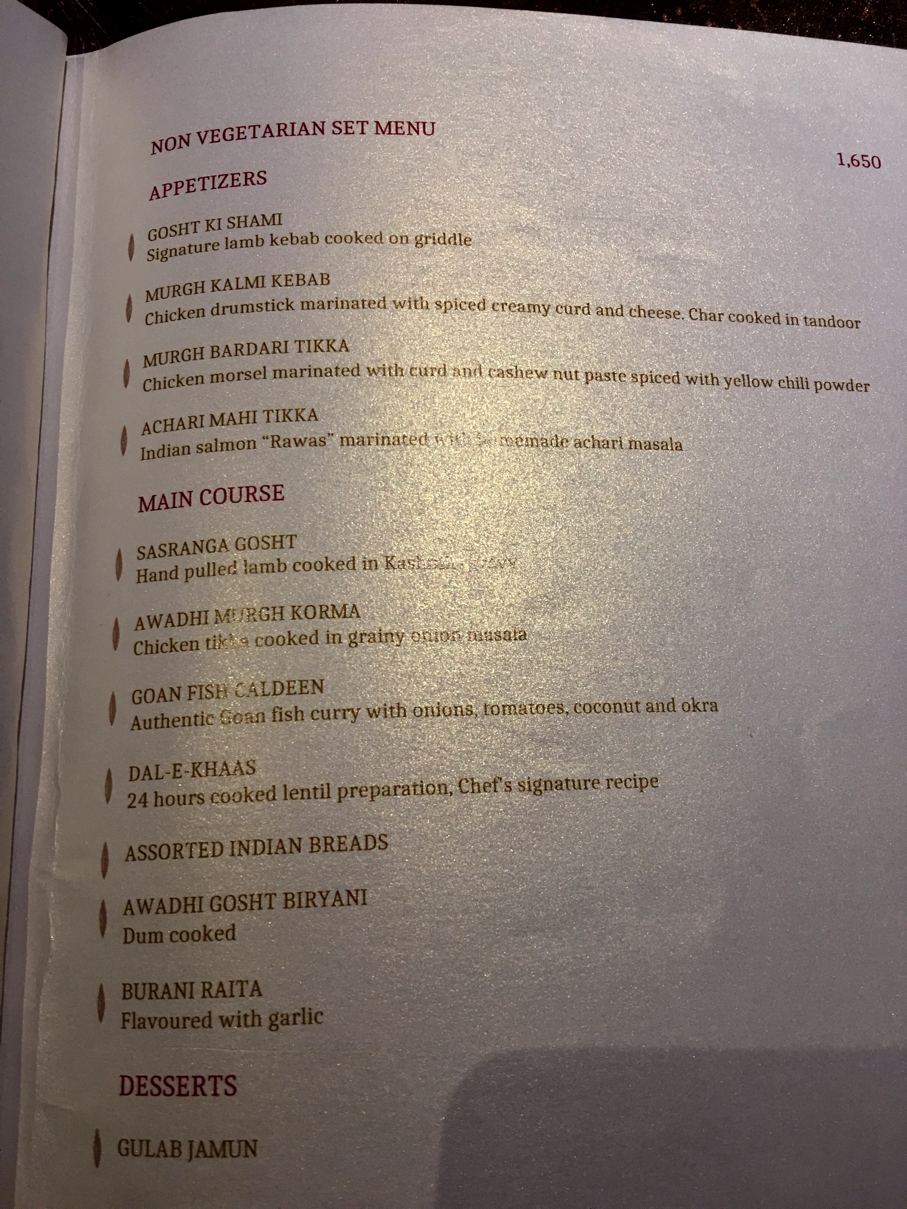 At IR 1650, about US $25, it proves to be a bargain, as the server attentively delivers every item one at a time, complete with a description: four appetizers, seven mains, and one dessert. Time for some slow eating... 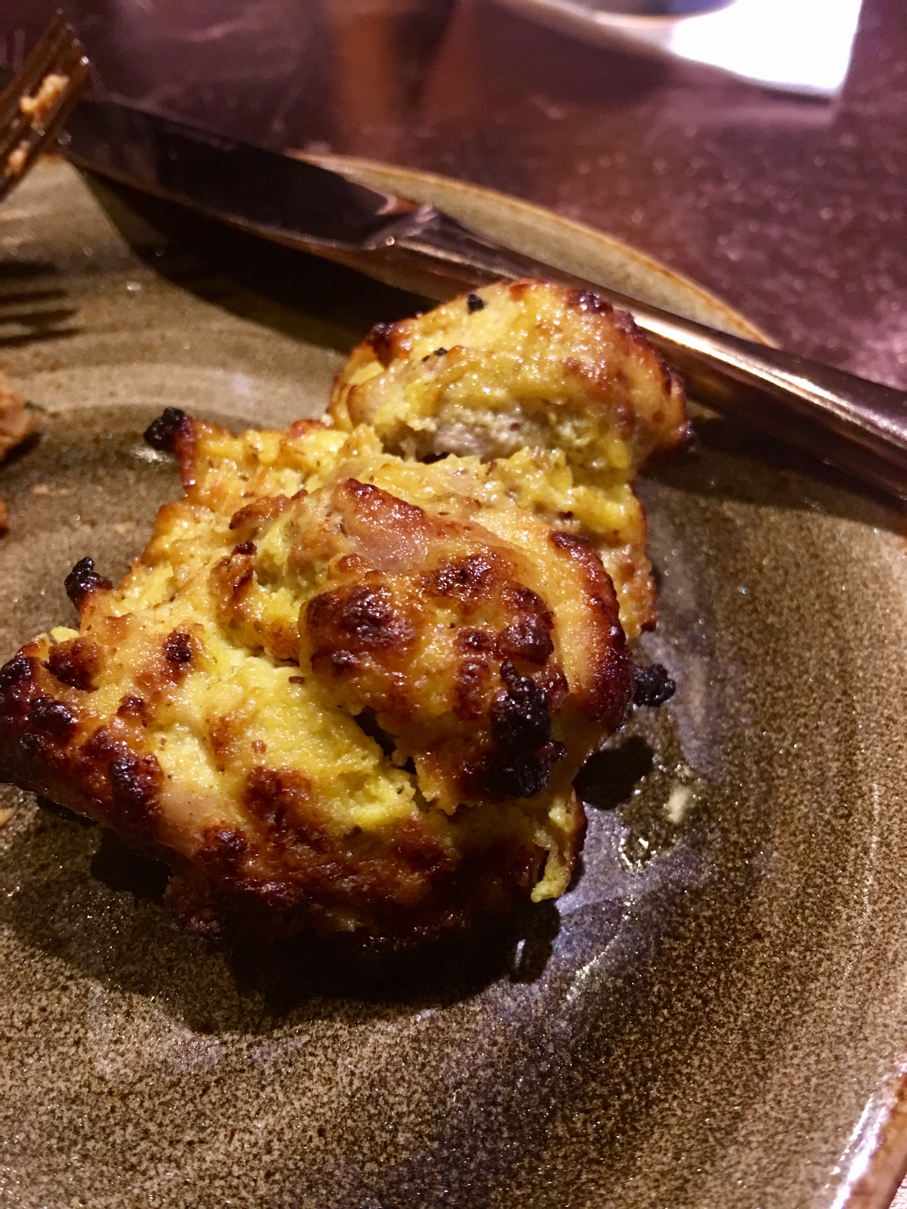 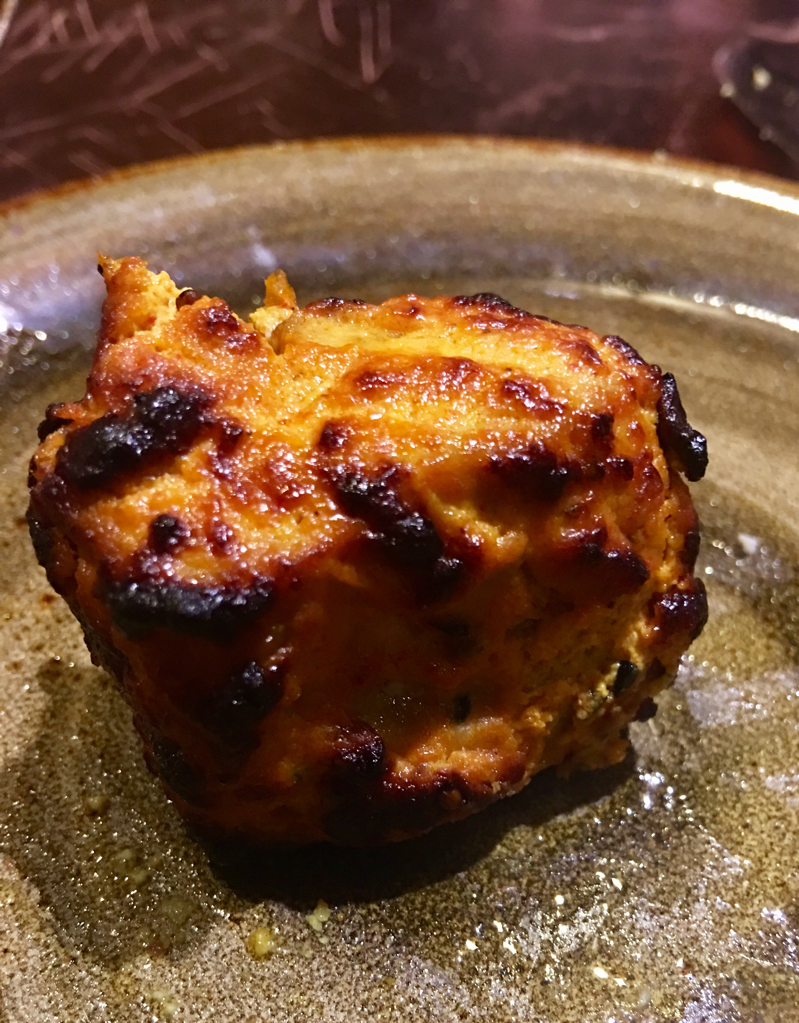 Now this is a multi-course meal. And this is attentive service. 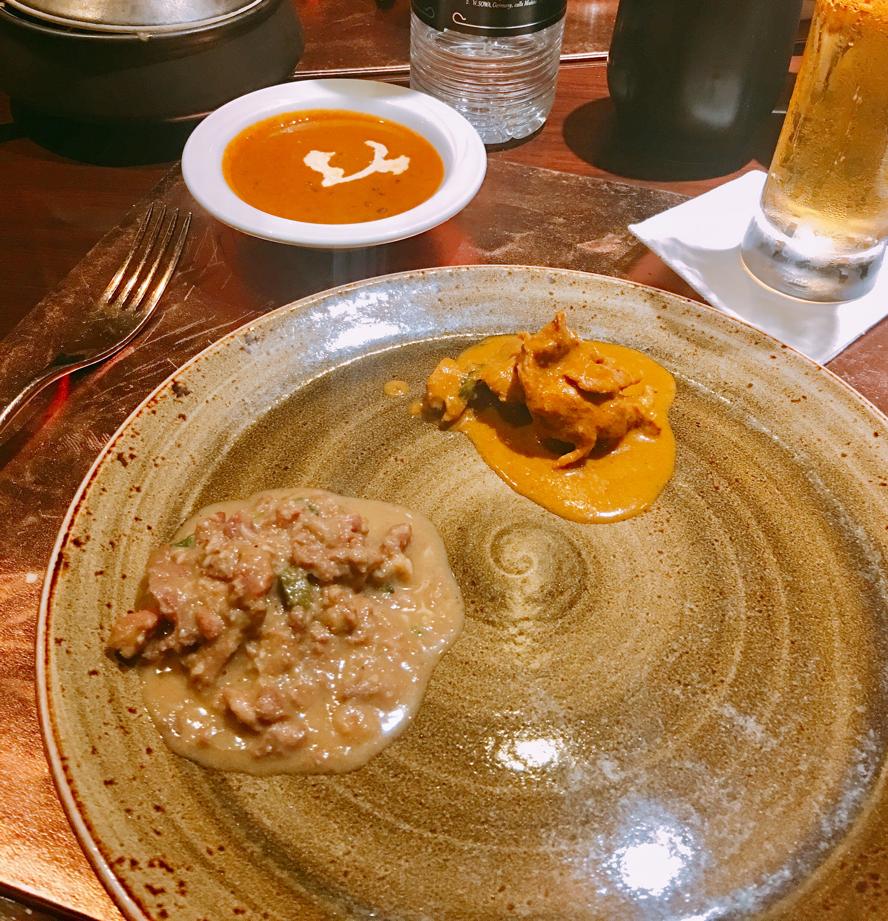 Buttered naan is great on its own or sopping up sauces. 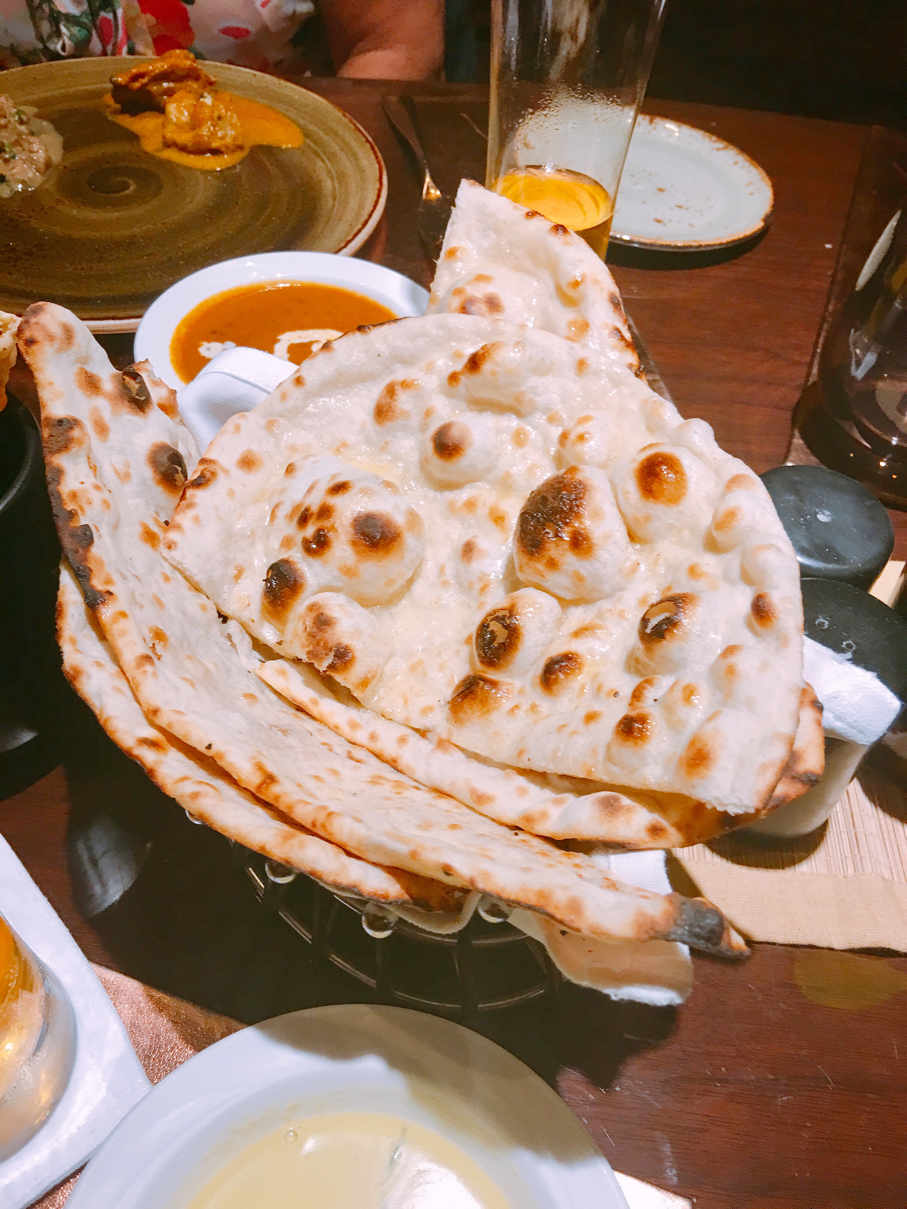 The chef arrived to ask if we were enjoying our dinner, and we lavished praise on him as the food kept coming, this time some rice added to our plates. Our waiter brought yogurt as well, to cook our palates as needed - it works. 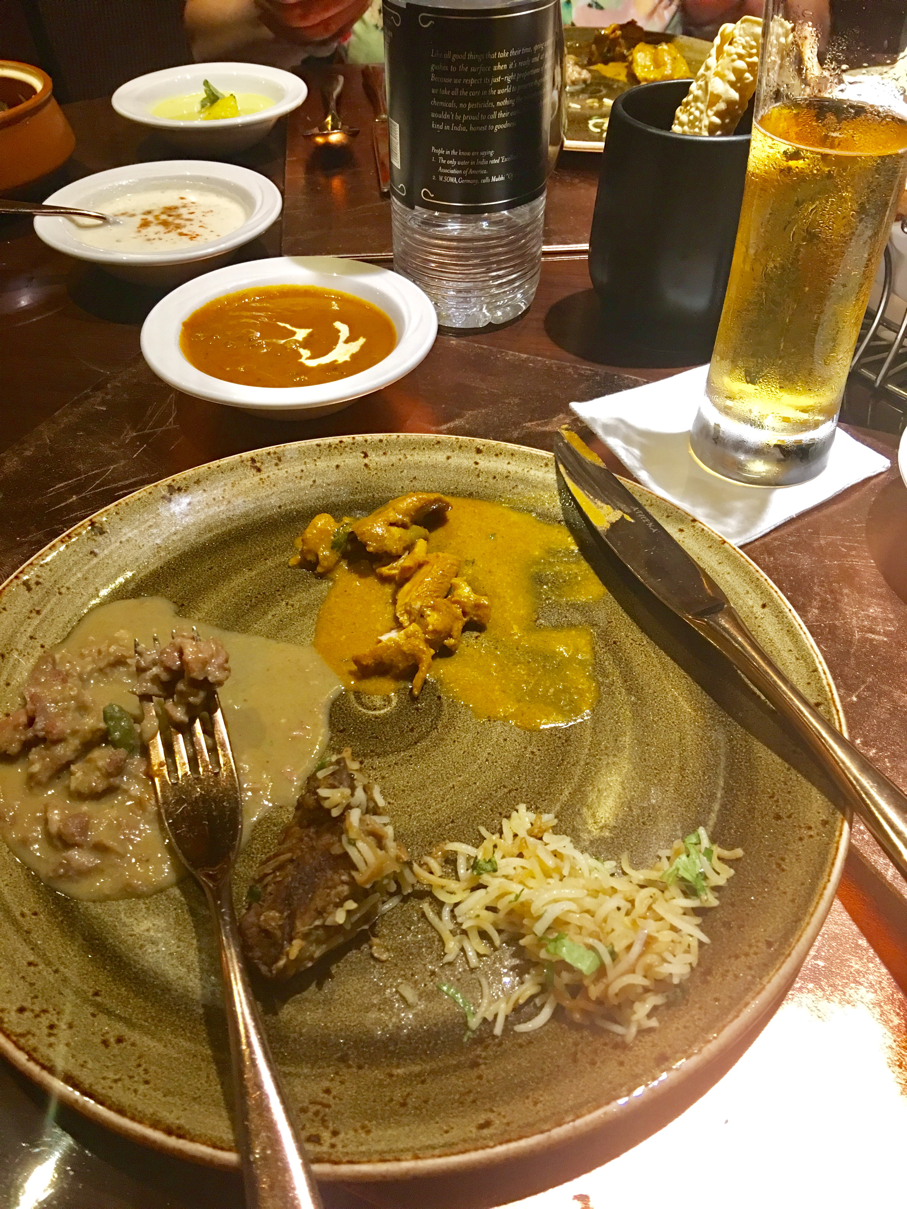 One Kingfisher Beer each and a bottle of that "organic" water kept us lubricated. The kitchen kept it relatively mild for us foreigners, but the spices were amazing, and we didn't miss the relative lack of heat. It was just right.
Finally it was time for dessert, Gulab Jamun being a sweetened little ball of greasy dough that tasted strangely satisfying.
Wikipedia describes it more factually as "a milk-solid-based South Asian sweet, particularly popular in the Indian subcontinent, notably India, Nepal, Pakistan and Bangladesh, as well as Myanmar."
The sweetness that we might find cloying another time offered one final pleasantly shocking contrast to our palates. 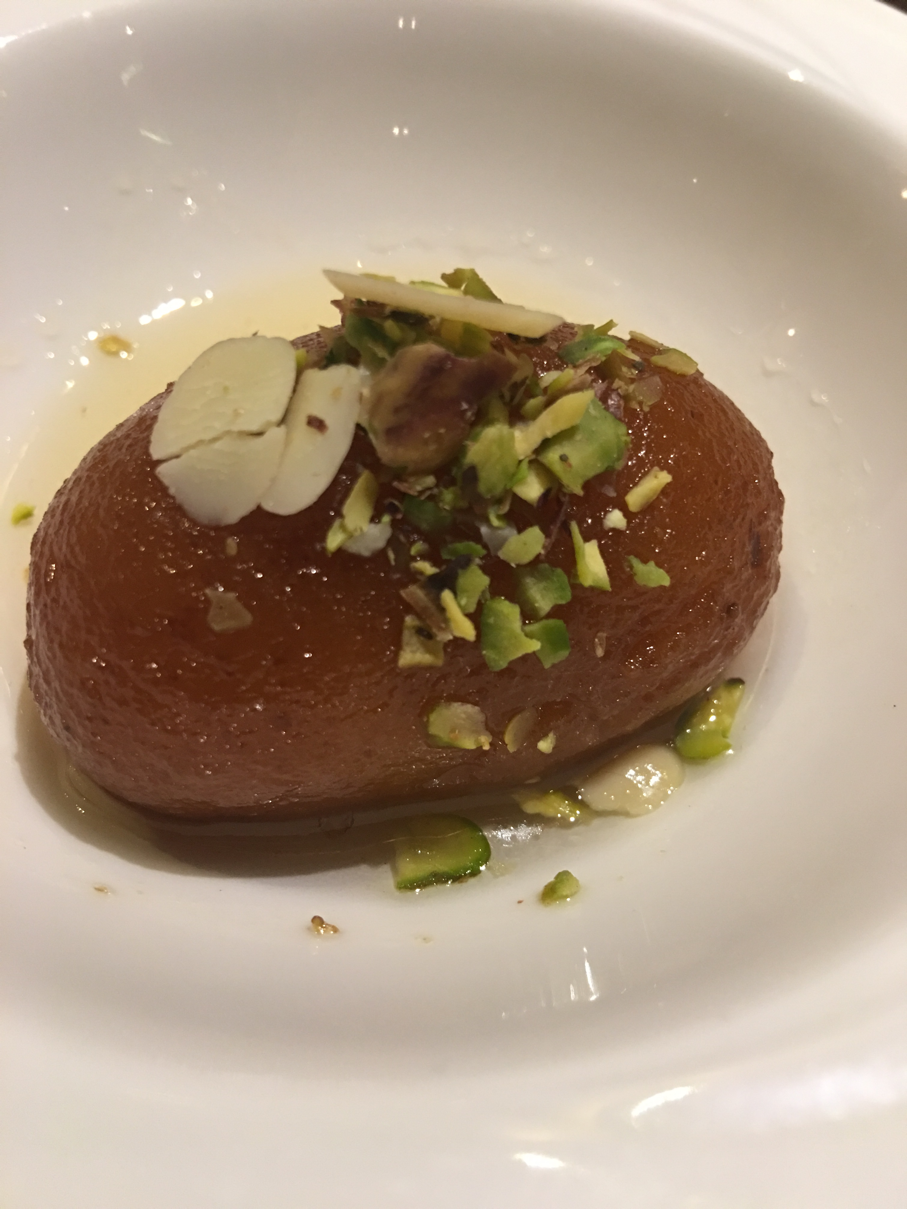 Yes, many of the courses were of the one-bite variety, but the  quantity added up, and we left pleasantly stuffed, thanking our waiter and tipping him generously, which we gather is expected in five-star hotels.
Great meal... actually a great dining experience for us.
Posted by Kathy and Brian at 7:32 PM