http://cial.aero/
We'd be more efficient next time. We showed our passports and Spice Jet paperwork to the armed soldier at the entry to the terminal.
Just inside the door was baggage screening with a sign about "carry on" (we thought). Since we were checking our bags, we didn't think it applied. Soon after we got to the counter, the friendly agent told us it did. They screen the checked bags out front, which makes sense.
By the time we returned to the counter a few minutes later,  with little red ties now securing the zippers on our bags, he had our boarding passes just about ready. We had bought up to priority boarding, seats at the front with extra legroom, and, at the last minute, lounge access.
The contract lounge is before security, and we learned later it  was $11 each well spent, including a nicely set out lunch. 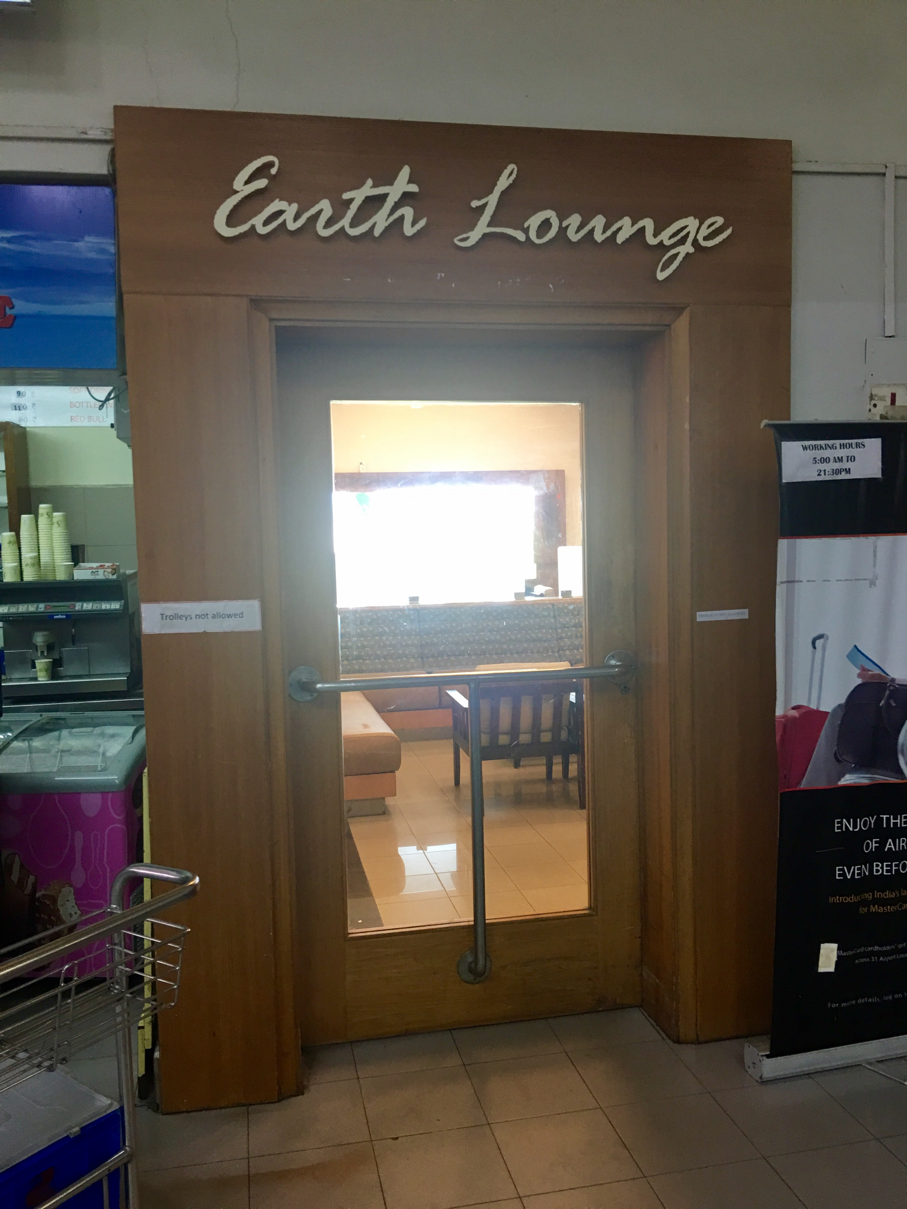 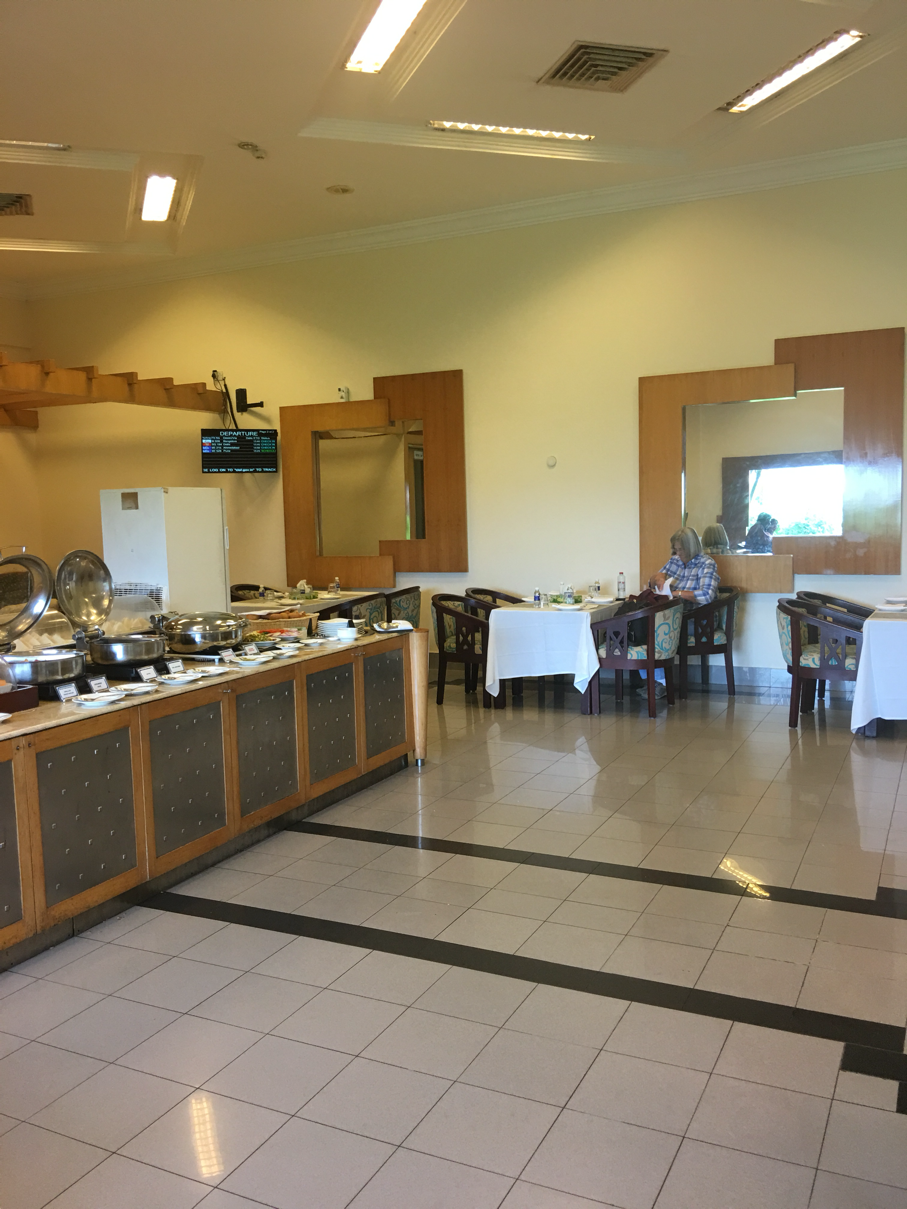 We left the lounge an hour so later and made our way through security. Brian pulled electronic items - headphones, toothbrush, computer cord case - out of his bag (learning from our BOM experience,!and zipped through.
When Kathy arrived from the ladies-only curtained screening, her bag was oddly the problem. After running it through the X-ray three times, the soldier was looking for a key and demanded she remove everything from it. He ran it all through again and then asked if she had tweezers.
Yes, she did, he shrugged and said okay, and onward we went, once she's stuffed all of the miscellaneous items back into her bag. It could have been worse. The Indian woman in front of her was desperately trying to hide the bra being displayed for all to see.
When we arrived at the "security holding area," we realized the wisdom of buying lounge access. 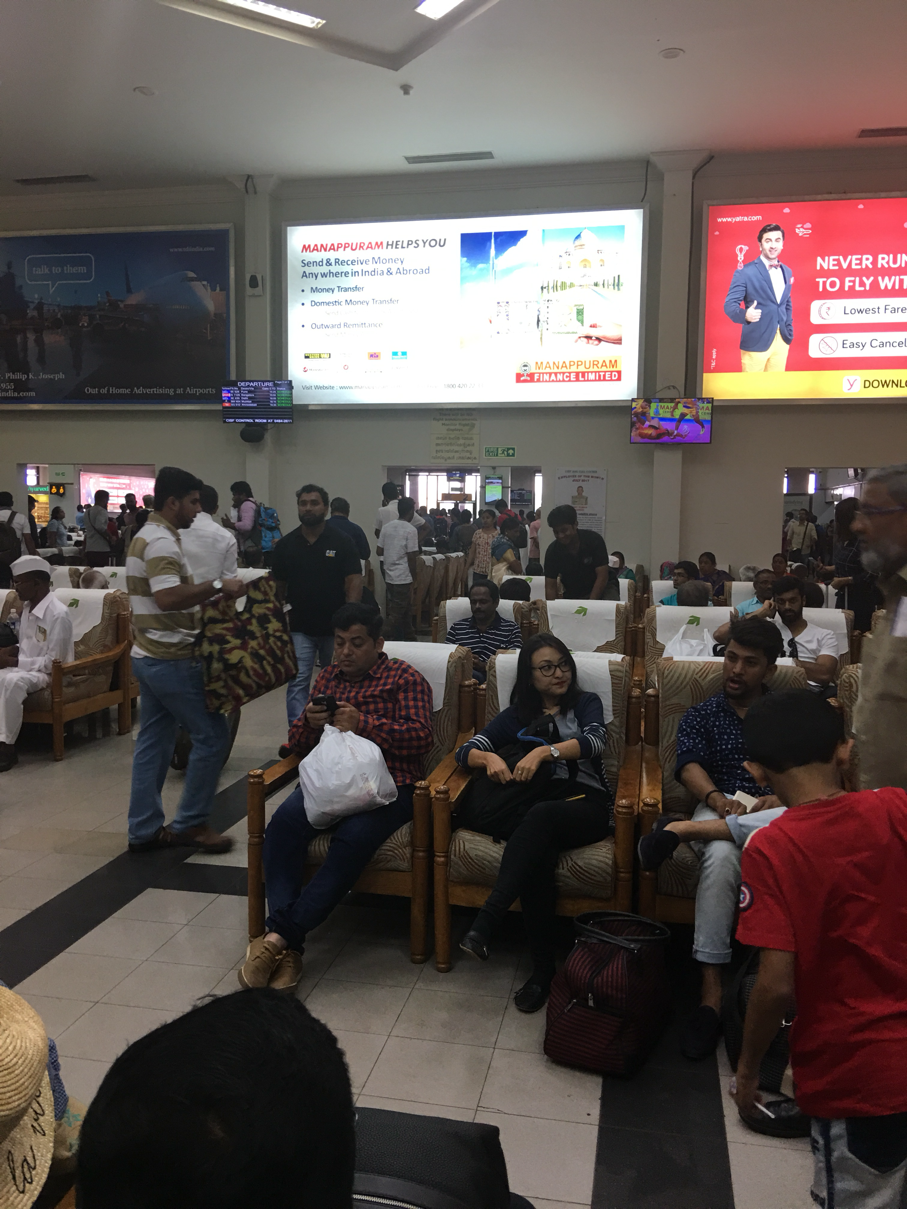 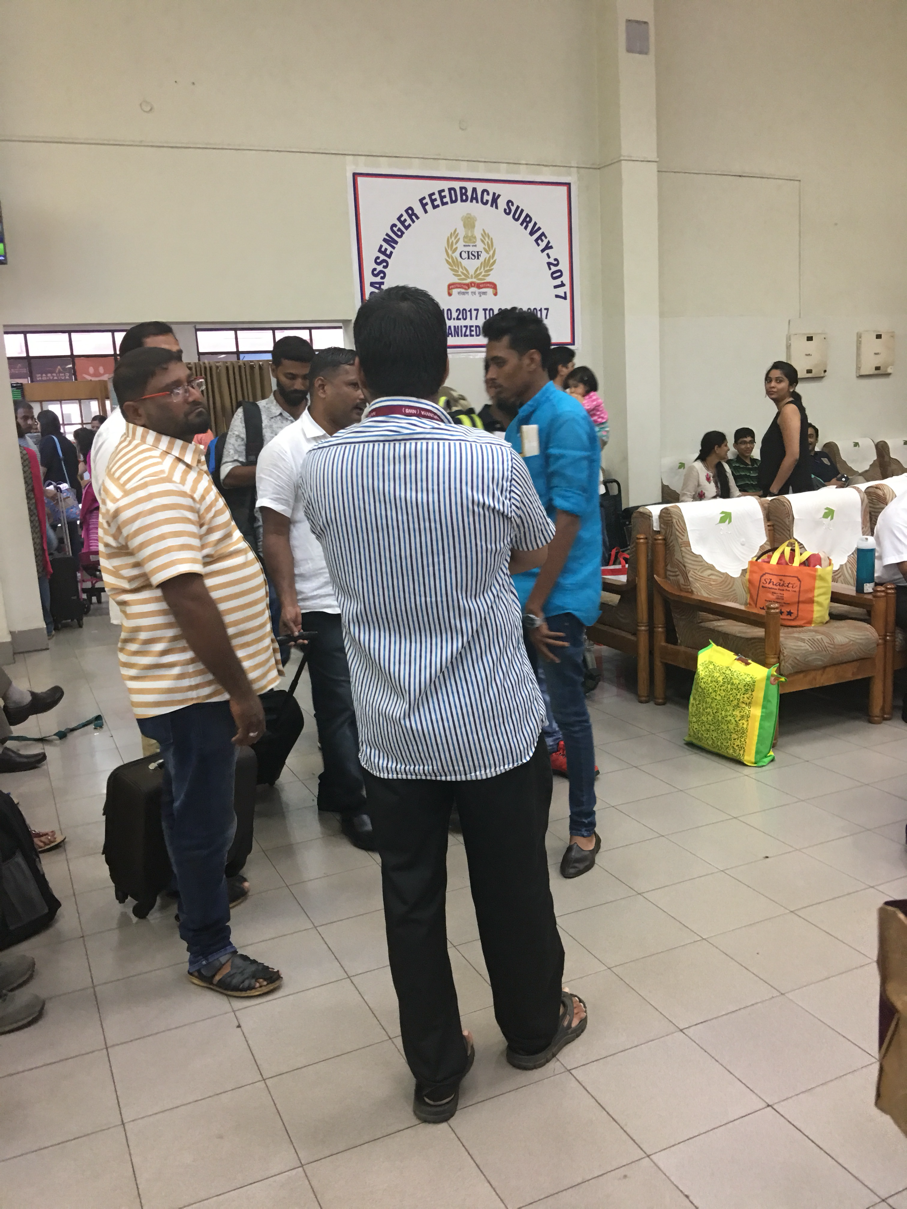 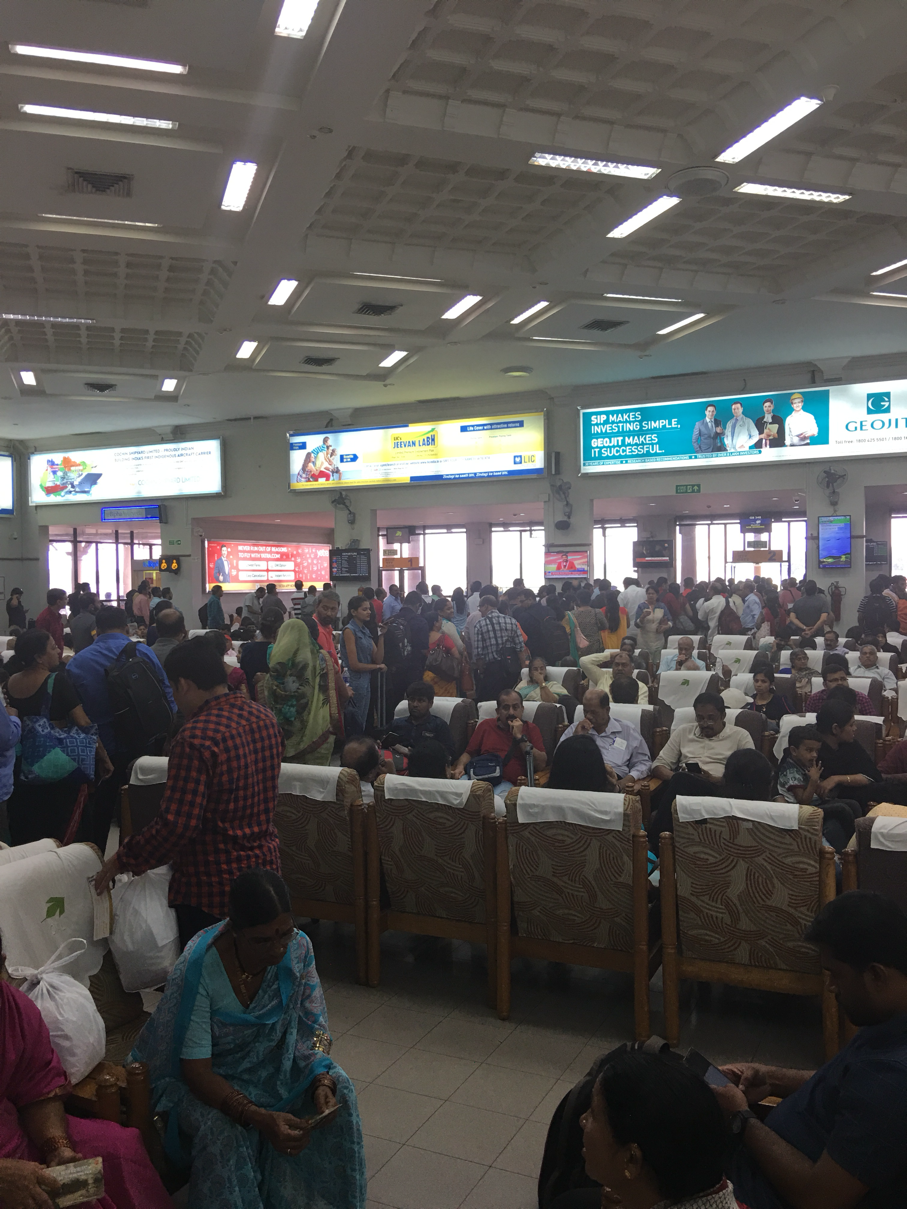 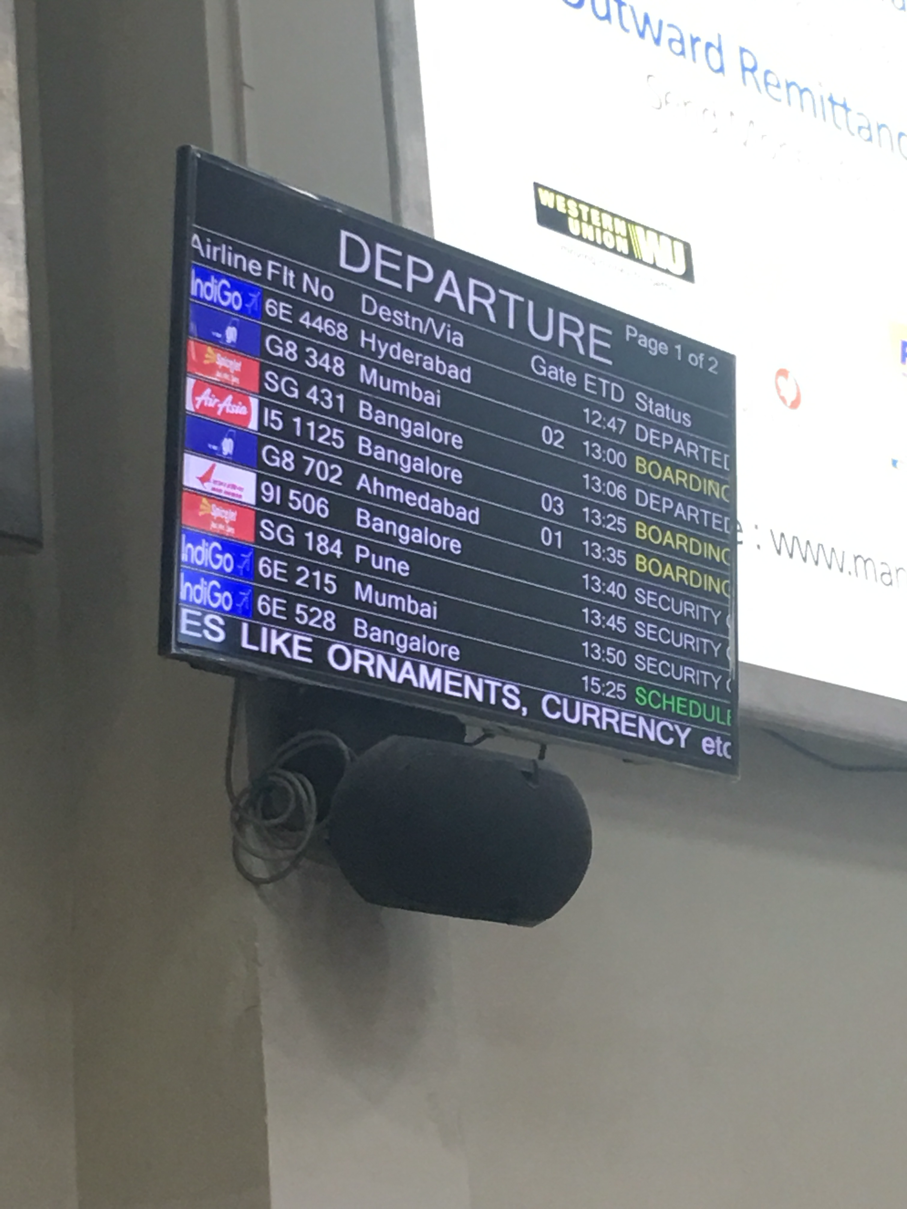 All the gates are remote, and you have to wait until your flight is called.
Surprisingly, it was very orderly. We even had our own little "priority seating" section at the front of the bus.
Once aboard, our bulkhead seats on the right side of the 737 didn't offer much legroom.
Once boarding was complete, we got permission to move back to an empty row three A-C that was much better.
We noticed a number of passengers moving seats, and were amused by the self-upgrading woman in front of us who kicked up quite a fuss that they wouldn't serve her the prepaid meal for free.
In our case, we turned down the meal, remembering Our niece Haley's suspicion on our first Indian trip that she'd picked up her Delhi Belly on plane food.
The 90-minute flight was fine. The crew warned people not to take photos on the plane or in Pune Airport, because it's a military airport.
That's fine with us. The only thing worth taking a photo of was the pair of us forlornly waiting for our bags to emerge in the carousel.
Fortunately a Spice Jet employee noticed us. Before we knew it, there were no fewer than four employees involved, and they caught the plane before it headed onward to Delhi.
It was a pleasant sight seeing a veritable delegation walk our little rollaboards into the terminal.
We thanked them sincerely and pulled up Uber on the app. Oops! Uber is not available online, despite previous assurances (although we later noticed an Uber counter).
Instead, we rode in a fairly crummy pre-paid taxi on the 20-minute ride to the Conrad. Still, it was cheap, and the beggars tapping on the car windows (and one young entrepreneur selling fidget spinners) brought back memories of Delhi. Pune looks a bit more like big cities on our first trip. We're not in Kerala anymore. We're in the state of Maharashtra, in the seventh most populated city in India and about four hours drive from Mumbai.
The Conrad security people opened its gate, checked inside the trunk and underneath, we paid the driver and walked through the metal detector into the lobby.
We had arrived.
Posted by Kathy and Brian at 2:10 AM