Johannesburg: Our Brush With Crime

After our late breakfast we took a ten-minute stroll up to Nelson Mandela Square on a quiet three-day-weekend Saturday morning (Friday was National Women's Day).

The Square features trendy shops and restaurants, and a large statue of the greatly revered Nelson Mandela. 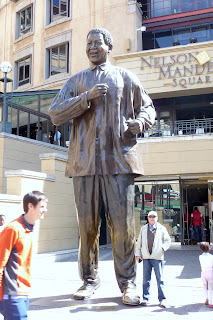 From there it was back to the hotel lobby to await our tour guide.

We were in a small group of six, two women from Australia and a couple from New Zealand, all very congenial. One of our first stop was at one of Nelson Mandela's homes, apparently his current residence. 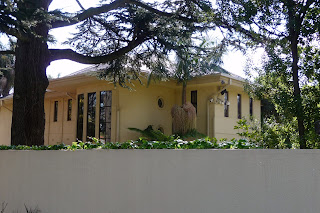 Outside on the grass strip near the sidewalk were touching messages written on pebbles that stretched along the block. 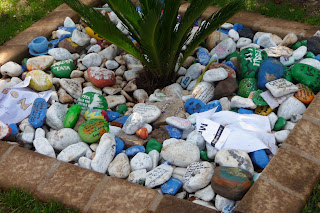 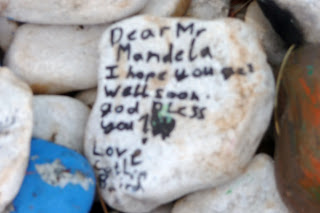 Our driver, "King," was a personable young man whose native language is Zulu. 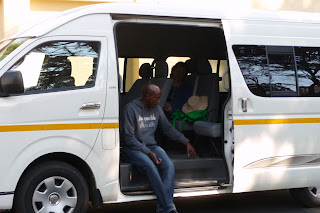 From there we drove onward to our next stop, the Constitutional Court. Here the eleven justices decide the weightiest of matters, with all proceedings translated into each of the country's 11 official languages. 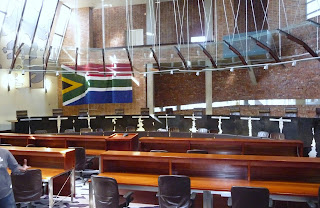 The court was built on the site of one of the country's most infamous prisons, Gandhi and Mandela both being incarcerated here at various times. This, and the fact that the quiet parking lot seemed to have a surplus of security guards, made our guide's discovery as ironic as it was upsetting.

He was in the building with us for only 10 minutes, then left us to wander around inside for another 15 minutes while he went outside to chat with people. He arrived at the van just in front of us, uttered and expletive and "I've been robbed."

Not only had the van been broken into, and the money in his wallet stolen, the bad guy(s) went through everything else. The few contents of Kathy's bag were strewn about but she hadn't left anything of value and nothing was taken.

The van's ignition had been popped out,the cowling removed, and wiring exposed. It was clear that somebody was trying to hotwire the van. The security office was only 20 feet away and there were loud and unhappy discussions between our guide and the security employees, eventually numbering five. A couple of policemen showed up after a half hour and we tourists hung out as we watched this little drama play out. 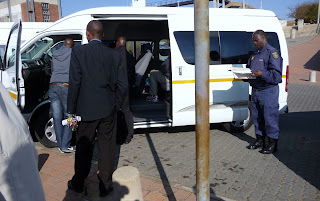 The parking lot of the Constitutional Court, security guards (South Africa has more security guards than any other country, and they supposedly outnumber the police and armed forces combined), closed circuit cameras and yet this happened.

Adding to the irony, before stopping here King had been telling us we would ordinarily be quite safe walking around during the day.

King called his company and they arranged for a substitute guide, who picked us upwards of an hour later. We all gave King some money and wished him well as we entered a smaller van for the remainder of our tour.

It could have been worse. Take-away quote from our poor guide: "They have to do something about this. It's one thing if it happens at night but nothing should happen in the daytime."
Posted by Kathy and Brian at 7:39 PM