We took the Gautrain from Sandton to the Rhodesfield station, called the Protea Hotel, and the shuttle appeared within 10 minutes, even though the clerk warned us that he was picking up elsewhere and would be 15.

As we left we counted up the security guards hanging around the large parking lot in three different areas and came up with a minimum of six. Here we see two of them in a typically vigilant pose. 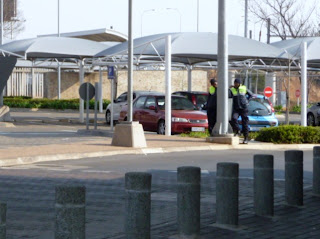 Apparently these jobs do not pay well and we're less and less surprised that our tour guide's van was broken and very nearly stolen yesterday while parked only a few yards away from a "security office."

We arrived at the hotel, and were greeted by an indifferent, if not sullen, young clerk who asked us to wait while she added up some numbers.

Let's get this out of the way up front: Notwithstanding the claim of Protea's website , this is not a four-star property. Judged by the room alone, it's more of a two-star. Still, it appears clean, comfortable, and perfectly adequate for a night's stay. Will Kathy ask Brian to close his eyes while she showers? Of course, there is a curtain on side. 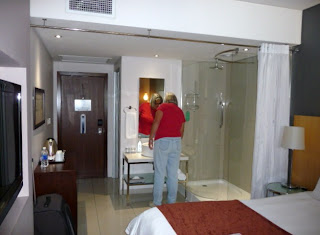 We can also look out our window and admire LH and AF A380s parked across from the terminal, at least until the LH bird moved over to a gate. 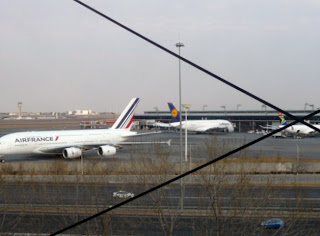 It must be a common parking spot because the publicity photo on Trip Advisor shows the same planes parked in the same position.

One final amusing (?) detail: We locked passports and wallets into the room safe. Kathy tugged on it for some reason and discovered it's not attached to anything and could easily be carried out of the room. Lucky we have Scottevests into which we can stuff everything.

A light dinner and a meeting of our tour group are on the agenda for the evening. Tomorrow we head for Kruger. What will our tour guide be like? What about the other members of the tour group?

It almost feels like the first day of school tomorrow.
Posted by Kathy and Brian at 7:37 AM