A fine breakfast in a JNB restaurant, Mugg & Bean, and a very pleasant British Airways (Comair) flight to Victoria Falls with an exit row to ourselves. We had a choice of two light meals on this one hour and 40-minute flight but settled for water since we'd just eaten.

We were fairly early off the plane but still waited in line for a half hour or more, fortunately inside out of the sun, until the friendly but slow immigration officers took their turns taking our USF $30 each and stamping our passports.

Our pre-arranged shuttle driver was waiting for us and off we went. A'Zambesi River Lodge is a very pleasant place and we're happy with our room. Tonight the mosquito netting was up around our bed when we returned from our wanderings.

As we waited for the hotel shuttle to the town and the Falls site itself, we bumped into the same nice young Australian woman we had stood behind in the immigration queue. Amy and we decided to join forces and toured the Falls together before wandering around the small Victoria Falls downtown and then enjoying a fine and reasonably-priced dinner at the somewhat elegant Palm Restaurant at Illala Lodge, one that came justifiably well recommended by Trip Advisor.

Then it was back to our hotel with a helicopter tour and a tram ride to the center of the bridge between Zimbabwe and Zambia scheduled for the morning.

Here are a few quick photos of our day with better ones to follow when time permits. 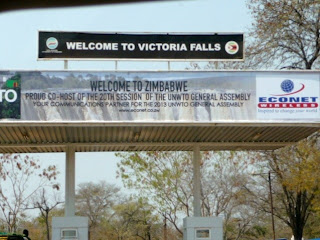 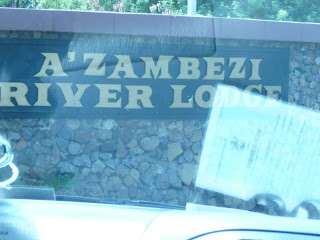 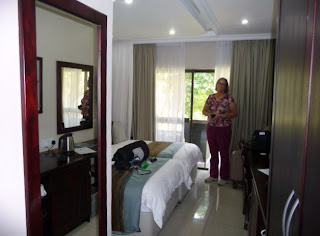 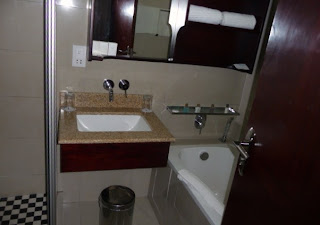 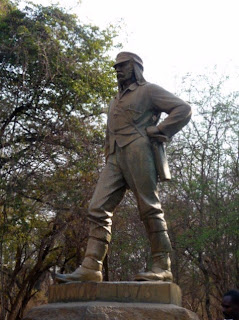 The warthogs roam as freely around the hotel grounds and the park as we'd heard. 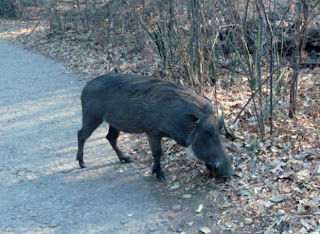 The falls are breathtaking, even with low water. 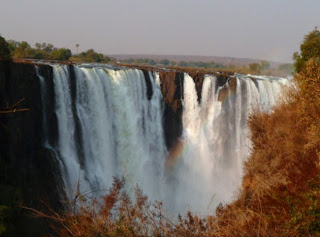 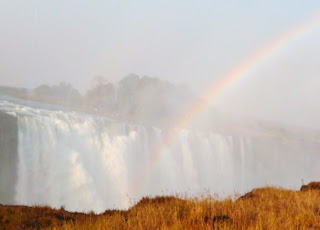 Brian bravely takes a photo of Kathy standing at the edge of a precipice taking photos. 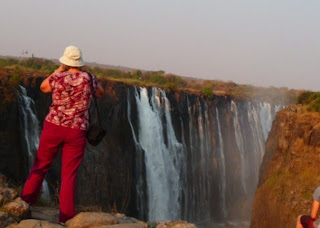 The Zambesi River Bridge, downstream from the falls. We're scheduled to ride the little tram car barely visible at the left of the photo to the middle of the bridge tomorrow after our helicopter ride. 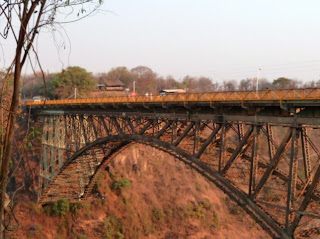 So far it wasn't as hot as we feared it might be. Most of the hordes of official tourists at the UN tourism conference here have departed. We did see some at the falls and a passenger in a car labeled "Iraq" waved at us majestically while we were waiting to cross a street. Maybe he thought we were standing there just to catch a glimpse of him.

Almost everyone we meet from the shuttle driver to the hotel employees to the taxi driver who drives us from the restaurant back to our hotel inquires gently what we have planned in the hopes that they will become part of the plan, but nobody is really pushy about it.

In short, it's been a fine day and we're looking forward to combination of relaxing around the hotel and seeing Victoria Falls once more from the air and from the bridge before departing for home Saturday morning.

Nice photos! When I was there in February, the water was so high it was tough to get a clear photo of the Falls -- lots of mist (of course, also lots of rainbows). I stayed at Ilala and liked the convenience, though the rooms felt very "motel-y." I'll be interested in your comments about the helicopter ride. I decided not to do it after I spoke with a couple who had and who told me that, because the water was so high, it was really tough to see anything. Besides, I'd gotten to see them from the air when our pilot did a go-around after the winds shifted when we were about 50' from touching down. Are you doing the bridge walk? I really enjoyed it -- and as it was out of the sun, it wasn't so hot! Enjoy the rest of your time there.

We really appreciate your thoughts. As it turned out, we followed the suggestion of a number of others and did take the basic helicopter tour this afternoon. Right now it is low water so the mist wasn't an issue and it was for us a fantastic experience - photos to follow.

We had signed up for the tram ride to the center of the bridge as well but found out it was canceled for whatever reason ("This is Africa"). What with timing, by the time we finished the helicopter tour it was too late to complete the bridge walk so we ended our stay at A'Zambezi by enjoying a lovely dinner back here accompanied by some enthusiastic entertainment from a troupe of dancers followed by marimba players, including stirring renditions of The Lion Sleeps Tonight and When The Saints Go Marching In.