Joburg And Soweto: On With The Tour

Our new guide introduced himself as Simba The Lion King. He was another native Zulu speaker and as personable as his unfortunate predecessor. He often started his sentences with "Friend of mine," and ended explanations with "Are you with me?"

He told us he "owned" Soweto, having been born there, and took us on a whirlwind tour of what he described as "The Good, The Bad and The Ugly." Soweto,

short for South Western Townships, has a population of two million people or more. It was of course set up as a segregated area for black mine workers, and was the scene of political arrests, demonstrations, and violent deaths in the struggle against Apartheid. 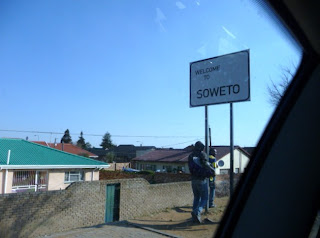 Our first stop was to take a gander at the home of the "black Bill Gates," designed to look like part of a computer (darned if we can remember either his name or the computer part). 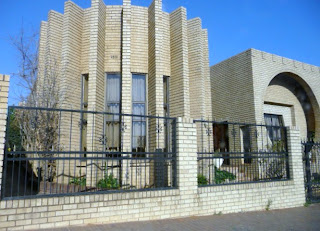 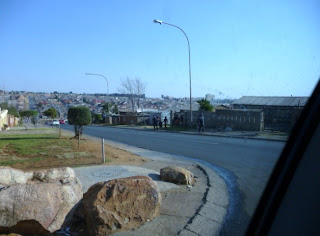 Simba pointed out the BMWs, Golfs, and Land Rovers that many people in this neighborhood drive. South Africa suffers from something like 25% unemployment but it's clear some are prospering.

From here we drove onward to see "the bad," much smaller houses and neighborhoods that aren't as well maintained. Granted that it was Saturday on a three-day-weekend, we suspect that any day of the week we'd see a lot of people just hanging around. A lot of the housing is government housing. From there we drove by "the ugly," small abodes that look pretty much like "squatter shacks." It's a tough life for many people in this country. 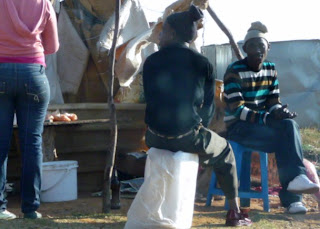 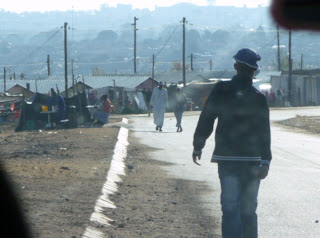 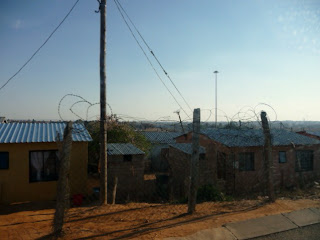 Our final stop with Simba was at the Hector Pieterson Memorial Museum. 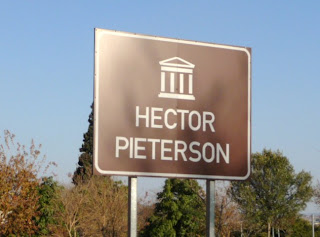 Hector Pieterson was a 12-year-old boy who was shot during a peaceful demonstration-turned violent June 16, 1976. The demonstration was organized after the government decided that Afrikaans would become the language of the black schools.

The museum itself is modern and features a lot of video displays and sound recordings. We were able to spend nearly a half hour there and could easily have spent longer; however, the attempted theft of our original van and the subsequent delay limited our schedule.

Simba was there to greet us as we squeezed ourselves into the back seat of his van. 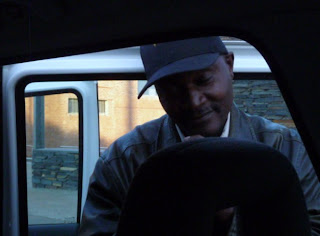 We drove by the "Beverly Hills of Soweto," a place with bustling restaurants doing a great Saturday afternoon business. Very trendy... 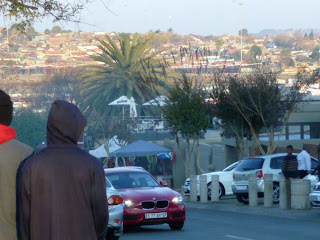 Simba also drove us by the very corner two blocks away from the museum where young Hector had been shot, and then needed to stop at a petrol station for some gas. He and the young station attendant talked in Zulu, and then Simba explained that the car theft would never happen in Soweto, because people look out for each other.

Joburg itself has a lot of vacant buildings and is apparently a shell of what it used to be. It was interesting to hear residents expressing community pride in Soweto. Petrol, incidentally, is about US $1.33 a liter (roughly 10 Rand to 1 US dollar), not that different in price from Canada, but a lot more expensive considering the average wages here. 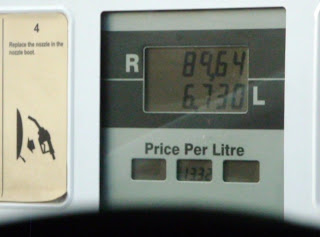 Simba drove us back to our hotels and along the expressway we could see the glimmer of a sunset at about 5:45 p.m. The days are getting longer but it's still winter here. 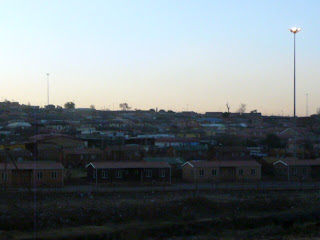 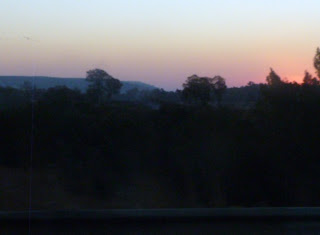 All in all it was a fascinating day in more ways than one, and now we can say that we've seen at least a little bit of Joburg and Soweto.
Posted by Kathy and Brian at 8:20 PM