What with the opera starting at 7:00 p.m., we decided to eat at unfashionable times. Yesterday there was an attractive two-course special in the Sheraton Restaurant but it had sold out by the time we arrived.

We ventured across the square to try Al Faro, and enjoyed an early dinner that was tasty and reasonably priced. 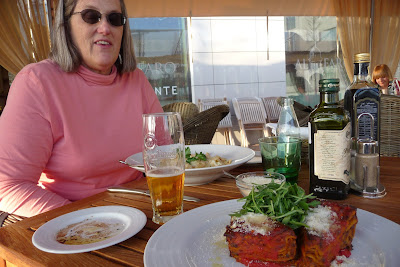 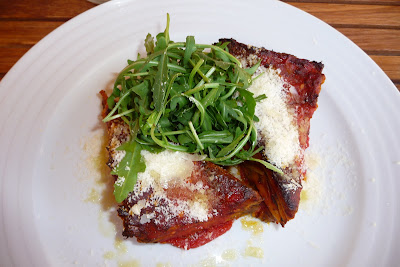 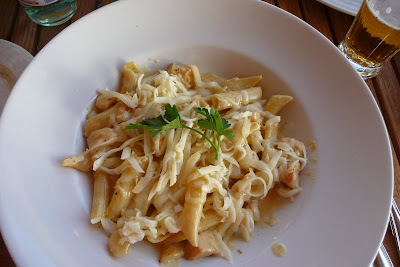 We decided on a late lunch rather than an early dinner today, after hiking around Devin Castle. This time the Sheraton Restaurant special of the day was still available: minnestrone soup and grilled salmon on risotto.

It was excellent and a bargain at 8.50 Euros each, including a generous bread basket with four varieties of tapenade, and a bottle of still water.

It's almost time to get dressed for the opera. Tonight it's "Cav" and "Pag", the deathly operas of passion, jealousy, and murder that are often performed as a twin bill.

We took a quick photo of the theatre from our balcony last night just before walking over there. What a venue it is. 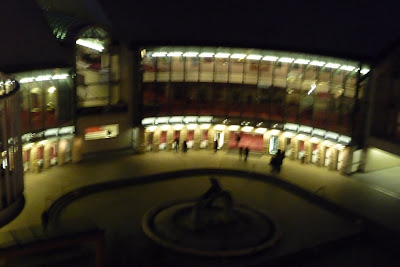 We're almost melancholy to realize that this is our final opera in Bratislava on this trip. We'd love to return here. Judging by the folks sitting behind us last night who spoke Viennese-dialect German (and shouting "Bravo" throughout the curtain calls), we're not the only ones to have discovered this bargain.
Posted by Kathy and Brian at 9:38 AM