Soon after getting the message about the flight delay, we got another one indicating we had been rebooked on a flight to IAD (Washington-Dulles). There are a couple of negative ramifications to that.

First, it's the more crowded UA configuration and we didn't have seats. Second, as it's the same flight number as our flight to NRT, we would end up with fewer miles - not a lot but perhaps enough to deny Brian the 1K threshold for 2014. He called the 1K line on Skype and was quickly reassured it was a computer-generated backup plan.

At that point we were wide awake, so we finished our packing, checked out of the Crowne Plaza, and were at the UA counter a few minutes later just after 5:00 a.m.

Nothing against SATS but this is the place to start our day. 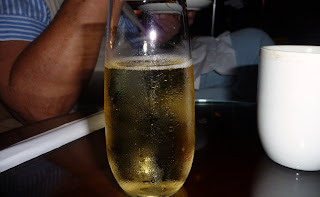 Listen up, spoilsports. It's already well past 5:00 p.m. on the East Coast, even if it's still last night.
Posted by Kathy and Brian at 2:37 PM