The rain finally let up enough for us to borrow a couple of umbrellas from the doorman and to head toward Chinatown on the MRT. We experienced a couple of standing-room-only rides before getting off. 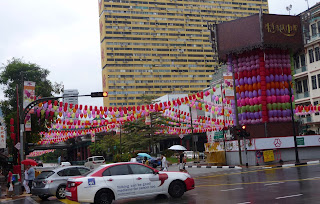 We wandered Smith Street, known as a food street in Chinatown and Tak Po looked promising. 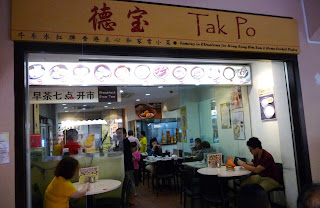 In a stroke of good luck, we were seated right next to window with a view of the kitchen. Despite the steamy air, we enjoyed watching employees (or was it a cook and students?) making dumplings by hand throughout our meal. 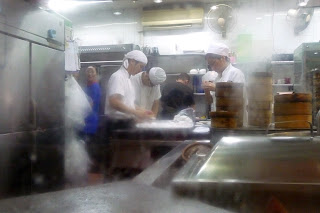 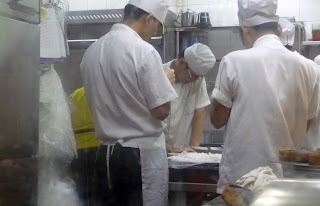 Kathy took charge of ordering from the menu, while Brian ordered the beer. 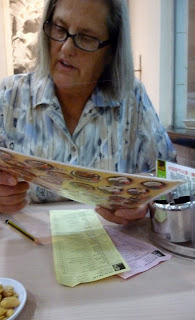 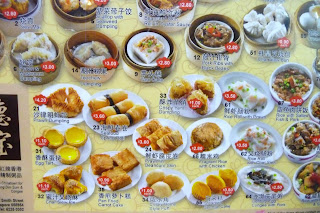 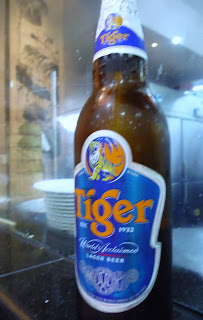 Her choices included a couple of Prawn Dumplings, Rice Roll with Prawn, Fragrant Rice with Chicken, and Sliced Pork with Black Pepper sauce. They all proved to be delicious. There wasn't one dish we didn't enjoy. 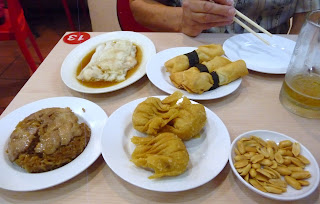 The Sliced Pork served hot-pot style was a standout, and at $7 the most expensive item on the menu. 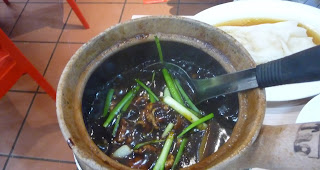 The final arrival was Brian's addition to the order, fried carrot cake. In Singapore, it turns out there is no carrot in Singaporean carrot cake (and there's a recent book with that very title), but a main ingredient, daikon, is sometimes translated as carrot rather than radish.

There seem to be many variations in this dish throughout Southeast Asia. Ours came to the table looking like this. 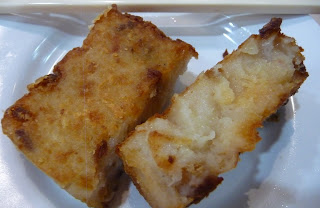 This Google collage of carrot cake photos displays this version roughly in the middle, one of many surprisingly different variations.

The bill for our entire meal, including one large beer, came to Singapore $35.20. This includes $1 for the peanut "appetizer" (a couple of reviewers complain about that) and 60 cents for two packaged wet towels, a charge we have seen elsewhere here.

We thoroughly enjoyed our meal. The air conditioned interior and the overall cool temperature (down in the 70s after the rainstorm!) certainly added to it.

We strolled along to another MRT station, stopping only to admire the Chinese lanterns framing another striking high-rise building in the distance, and a small Hindu temple from across the street. 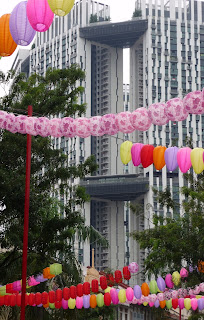 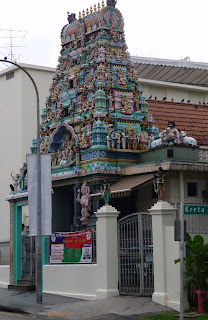 It wasn't until we returned to the hotel and looked up Tak Po that we learned it is well reviewed both on Trip Advisor and Yelp.We're not at all surprised.