What (Or Where) The Cape Of Good Hope Is NOT

The Cape of Good Hope, as photogenic as it is, isn't actually the southernmost tip of the African continent, nor is it the spot where the Atlantic and Indian Oceans meet.

Still, for all intents and purposes it's been one of the special places in the world ever since the Portugese navigator Bartolomeu Dias (whose name South Africans pronounce with a long i ) sailed around it in the late 1400s, thus opening sea routes between Europe and Asia.

We took a bus tour out to the Cape the day after we arrived in Cape Town at the official conclusion of our coach tour and enjoyed visiting a famous spot we hadn't gotten to five years ago. 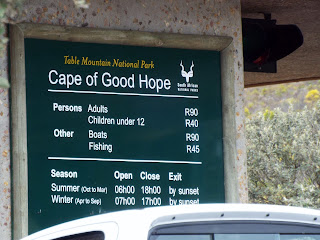 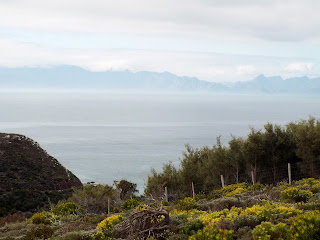 After our first look at the magnificent scenery, we moved into the restaurant for lunch. Given the location, sitting in the middle of one of the major tourist stops in all of South Africa, the food was delivered promptly, attractively presented, tasty, and reasonably priced. Kathy chose mussels and Brian enjoyed the hake. 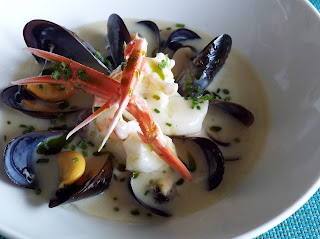 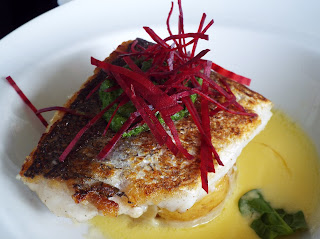 After that it was back outside to feast our eyes on the majestic scenery. Kathy was still in the midst of coughing, due to the Australian bus bug, so we opted to take the little railway up to the viewpoint. 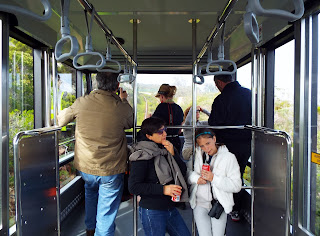 The view from the top was worth it. 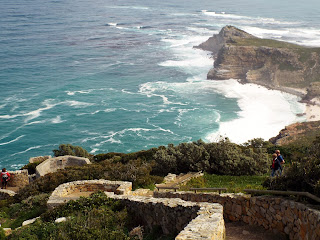 Would we climb the stairs to the very top? Not this trip - maybe next time. 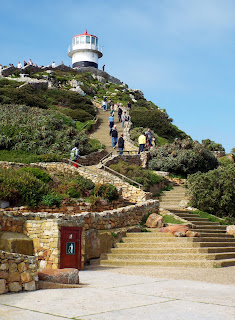 We had enjoyed the company of two Susan and Leslie, Australian sisters also on the tour, and we asked Susan to join us in a photo. Leslie, unfortunately, had been hit even worse by that virus and spent the day resting at the hotel. 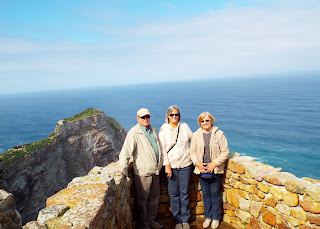 One more good look around before riding back down... 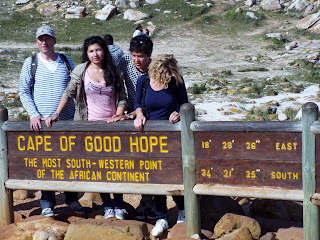 As far as we can tell, this sign, located a little way away near the parking lot, may be accurate. 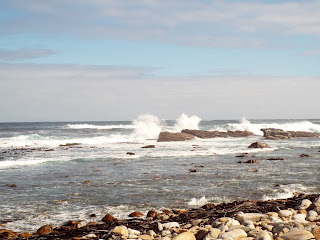 The late Senor Dias would have recognized much of the major shapes of land and sea, but he would have been shocked by the parking lot full of cars and buses to be sure.