Taipei: A Museum And A High Rise

This morning we visited the National Palace Museum, an amazing treasure trove of Chinese history. Since no photography is allowed inside, our only photo is a shot of the exterior. 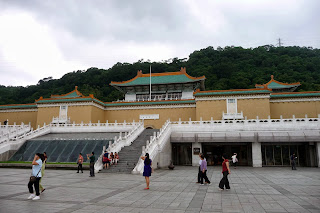 We wandered around it for three hours. Even though we didn't arrive early, the tour groups didn't hit until we had been there for an hour and even then they didn't get in our way that much. To put it more accurately, we went where the tour groups weren't and managed to see quite a bit.

This collection has a rather amazing history:


In 1931, shortly after the Mukden Incident Generalissimo Chiang Kai-shek's Nationalist Government ordered the museum to make preparations to evacuate its most valuable pieces out of the city to prevent them from falling into the hands of the Imperial Japanese Army. As a result, from 6 February to 15 May 1933, the Palace Museum's 13,491 crates and 6,066 crates of objects from the Exhibition Office of Ancient Artifacts, the Yiheyuan and the Hanlin Yuan Imperial Academy were moved in five groups to Shanghai.[8] In 1936, the collection was moved to Nanjing after the construction of the storage in the Taoist monastery Chaotian Palace was complete.[9] As the Imperial Japanese Army advanced farther inland during the Second Sino-Japanese War, which merged into the greater conflict of World War II, the collection was moved westward via three routes to several places including Anshun and Leshan until the surrender of Japan in 1945. In 1947, it was shipped back to the Nanjing warehouse.

The Chinese Civil War resumed following the surrender of the Japanese, ultimately resulting in Generalissimo Chiang Kai-shek's decision to evacuate the arts to Taiwan. When the fighting worsened in 1948 between the Communist and Nationalist armies, the Palace Museum and other five institutions made the decision to send some of the most prized items to Taiwan.[10] Hang Li-wu, later director of the museum, supervised the transport of some of the collection in three groups from Nanjing to the harbor in Keelung, Taiwan between December 1948 and February 1949. By the time the items arrived in Taiwan, the Communist army had already seized control of the Palace Museum collection so not all of the collection could be sent to Taiwan. A total of 2,972 crates of artifacts from the Forbidden City moved to Taiwan only accounted for 22% of the crates originally transported south, although the pieces represented some of the very best of the collection.

Fortunately, the only invasion from Mainland China is that of throngs of noisy tourists. We've previously mentioned that they don't enjoy a good reputation here (although their spending is welcomed) and they are probably the cause of the assignment of a number of employees to carry around little signs asking people to speak quietly. No, it doesn't seem to do a lot of good, as recent Trip Advisor reviewer pointed out. We've never seen such a sign displayed anywhere.

We utilized our two-day MRT pass to travel from the museum to another one of Taipei's "must-visit" places, Taipei 101, the world's tallest building between 2004 and 2010, and still the third tallest building in the world.

Despite the overcast day and the downright corniness and commercialism, we managed to enjoy ourselves. 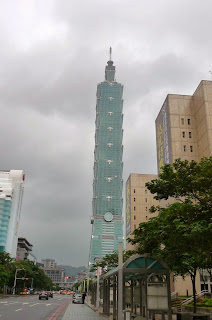 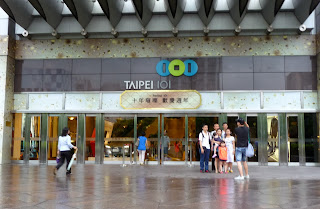 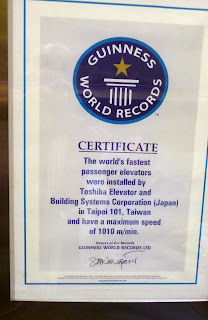 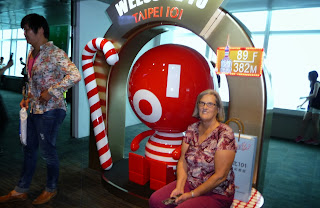 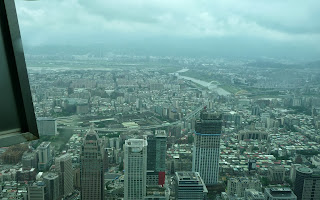 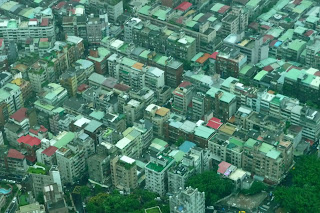 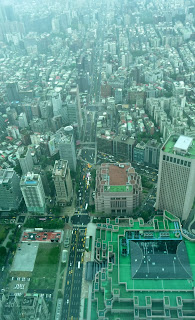